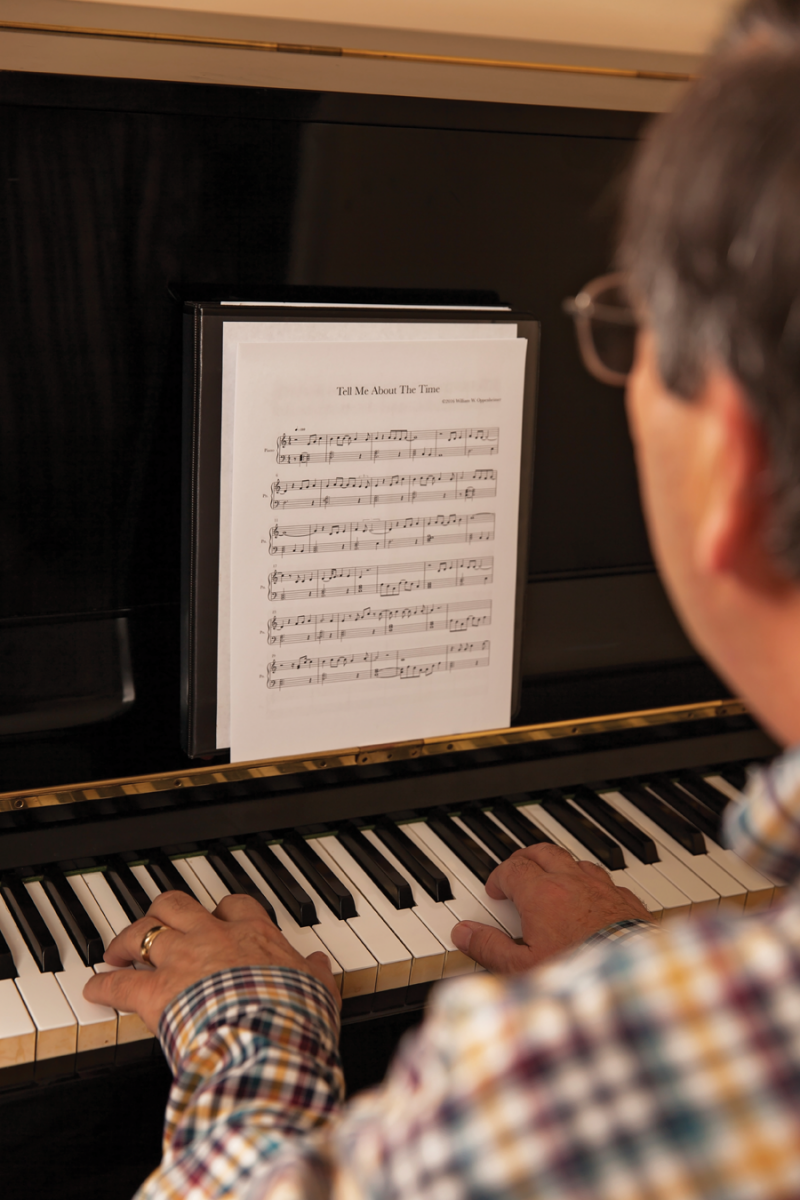 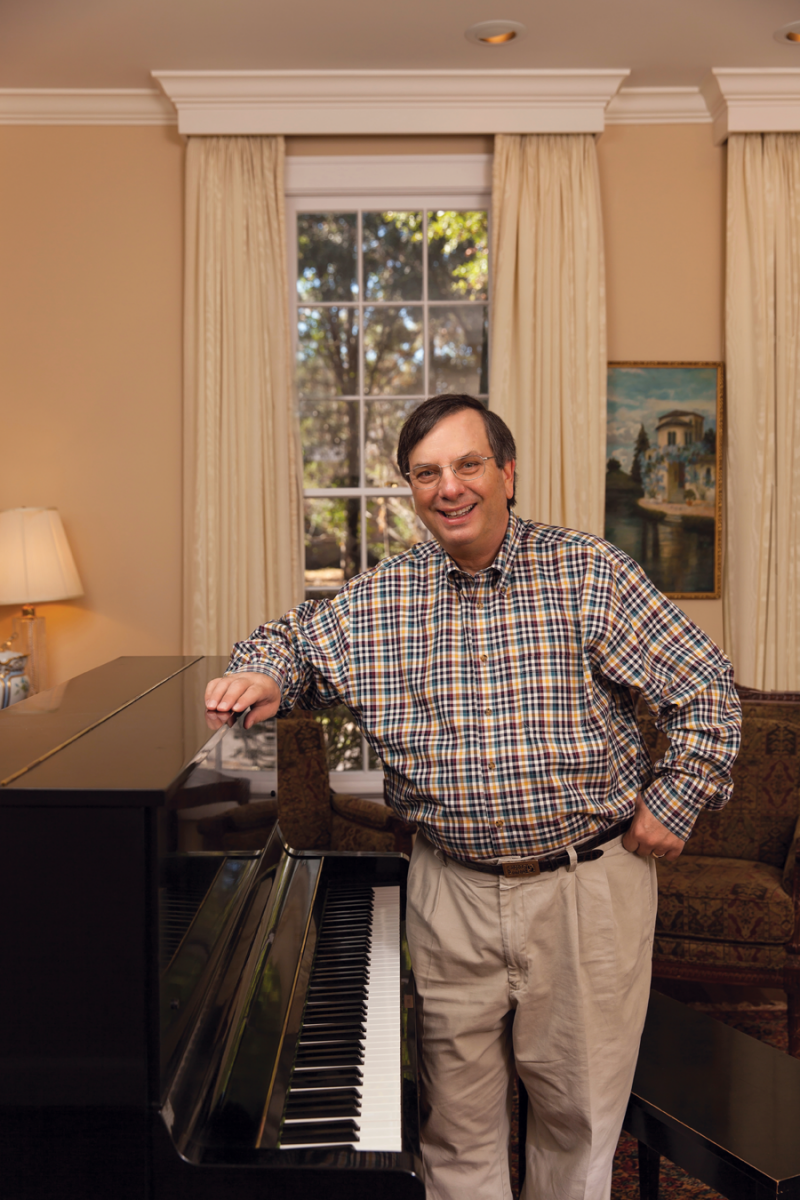 At 4:30 a.m., while the town is sleeping, a Mobile businessman and grandfather is already up, music on his mind. Making his way to an electronic keyboard, he begins to play, a two-hour ritual moving from the prayerful to the lyrical to good ol’ rock ’n’ roll.

“Music, ” says William Oppenheimer, whose dawn recital includes Bach, Scott Joplin and The Grateful Dead, “is rejuvenating.” It’s an experience, as he describes it, akin to a fountain of youth.

At 63, Oppenheimer is drinking deeply of that fountain. As a software developer, civic leader and family man, he would have plenty to keep him busy without adding “musician” to his vita. Even so, his seventh decade finds him renewing the love he first found as a teenager: playing piano. He is a keyboardist with two Mobile-based bands and recently reunited with his college band from Yale, Diamond Reo — now Diamond Reo 75, named for the class of ’75 — to cut their first album.

Available on iTunes, “Back on the Truck” is a compilation of four songs written by band members, including Oppenheimer’s creation, “Tell Me About the Time, ” the soulful ballad of a man reminiscing with his dying father about their cherished outings hunting and fishing. As a sportsman (when not rising before daylight to play piano, he does so to hunt turkeys), Oppenheimer combines his love of family and the Alabama outdoors in the song where son and dad remember when “the dogwood trees were blooming fine / We laughed our way back through the pines / And grilled a steak and drank some wine.”

The five members of Diamond Reo 75, scattered around the country, recently came together for a weekend of practice at Ono Island. And with this group, there is something more.

“Renewed friendship is almost better than the original, ” Oppenheimer reflects. The members of Diamond Reo 75 may have lost touch with each other from their undergrad days at Yale, but now, in their early 60s, they are happily connected again.

“There are the memories of the original, ” he says of their college band and friendships, “and now the surprise of the new.”

In addition to Diamond Reo 75, he performs with Glenn Normand’s Grand Band at Mobile gigs such as the Mardi Gras King’s Supper. Then there’s his own Rat Pack-era group, The Bay Rat Cannolis, locally performing standards by Frank Sinatra and Dean Martin among other 1950s swingers.

Music is his passion, if not his livelihood. So far, “Diamond Reo 75 has made dozens of dollars from our album, ” he jokes in characteristic low-key humor.

All in a Day’s Work

Alone at his keyboard for his dawn sessions, Oppenheimer includes a song composed by another Diamond Reo 75 band member, guitarist and lead singer Tommy Bourgeois. His tune, “For Honor’s Sake, ” begins: “Springtime down in Mobile, magnolia filled the air / I fell in love five times a day …”

Before long, the sun is up, and Oppenheimer heads to the office at the University of South Alabama’s Technology and Research Park. He is president of Enveloc Inc., a data backup and storage provider.

“A lot of software geeks are musicians, ” he observes.

He likens the writing of software code — filled with nuances and creativity — to composing music. “The Greeks taught music and math together. They have a lot in common.”

Music, indeed, threads itself through his workday.He gets an email from Glenn Normand with the lineup of songs for an upcoming dance and makes sure he has the chord progressions. He reaches out to the Diamond Reo 75 members about their next reunion and receives word that another classmate, a documentarian, hopes to make a film about their musical friendship. He checks his calendar for his community service gigs with Bay Rat Cannolis at Somerby Senior Living and Westminster Retirement Village.

Then, he is off to perform for the evening at Abba Mediterranean Cafe, tickling the ivories with renditions of Sinatra standards as Billy Curtright, who also sings for Bay Ray Cannolis, does the crooning. 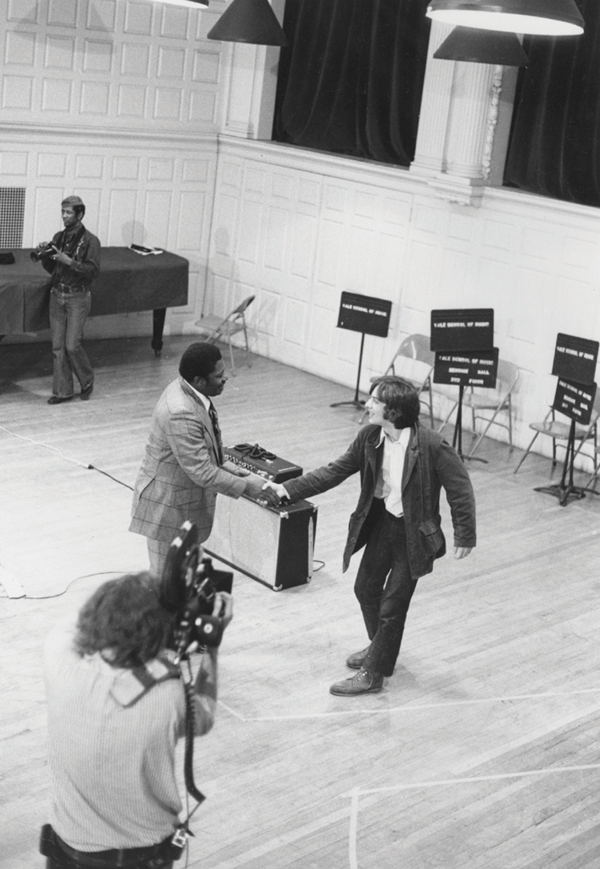 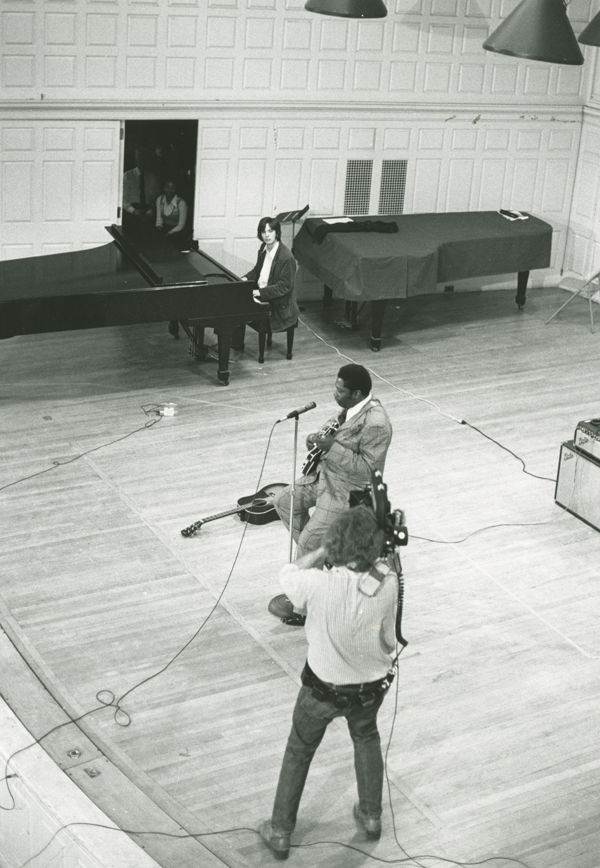 ABOVE LEFT TO RIGHT While William Oppenheimer was a student at Yale University, the legendary Mississippi Delta bluesman B.B. King gave a guest lecture to his American Studies class. During the talk, Oppenheimer was called up on stage to accompany the artist. Today, he vividly recalls that overwhelming and magical moment. Click here for video of the scene.

From Boy to King

Growing up in Mobile, Oppenheimer did not touch a keyboard. Heading north to prep school in the ninth grade, he began to have a hankering to do so. During high school at Shady Side Academy in Pittsburgh, he was captivated by the music of the late 1960s, especially The Doors’ “Light My Fire, ” The Turtles’ “Happy Together” and “Double Shot (Of My Baby’s Love)” by the Swingin’ Medallions.

Oppenheimer’s mathematical mind helped his growing sense of music as he taught himself to play using dorm pianos and even an organ at the chapel, picking out songs such as “Light My Fire” to practice his hand. These forays were “exercises, ” he recalls, more than musicianship. “Then I heard The Band’s ‘The Night They Drove Old Dixie Down.’ I could play that, I thought, and how cool to do so with a band.”

As a freshman at Yale, he joined his first group, Moon-shine, that played the college circuit, including Vassar, Smith and Mount Holyoke. “All the girls’ schools, ” he says. “It was heaven.” Moonshine’s drummer was Paul Baumgartel, who hooked the two of them up with guitarist and singer Tim Kalliches, who would go on to be a sound technician for Frank Sinatra. Kalliches started Diamond Reo.

The band’s name came about by serendipity. Chris Kee, the bass player — who would go on to one day open for the legendary Jerry Garcia — saw a garbage truck go by with the company name Diamond Reo trucks on the side, and the name just  clicked.

Oppenheimer deepened his love of music, studying music theory in college and, summers back home, performing at Stein & Still, a former restaurant-bar in Mobile. He was still untutored on the piano but had legendary inspiration.

“B.B. walked onto the stage, ” Oppenheimer remembers, “and after talking about the blues for several minutes said, ‘Do y’all have a pianist in the house?’ I thought he just wanted a show of hands, so I raised mine.”

“Was I exceedingly nervous?” he says, recalling how he took his place at the piano on stage. “Oh, yeah.”

But there was more.

“B.B. said, ‘Now listen what happens when you put something in it.’ He nodded to me, and I did what he suggested.” Then they played King’s classic, “The Thrill is Gone.”

“I finally caught on.”

King then asked Oppenheimer to accompany him at another presentation on campus.

And he spoke what were golden words to any young musician’s ear: “After his lecture, he asked me to come backstage and spoke to me privately. He complimented my playing and said he hoped I would continue musical pursuits. B.B. was very kind and encouraging.”

Oppenheimer thought of making a career of music, but he decided to return south and go into the family export business, eventually diversifying into the software firm. He married a Mobile resident, Nancy de Juan, and they had two children: Nancy (now Nancy Wood), a pediatrician in Mobile, and Harris, a Mobile attorney. Then, grandchildren came along.

His family and friends often show up at his performances and are special guests at the last day of Diamond Reo 75’s practice weekend on Ono Island.

For singer Tommy Bourgeois, who makes his home in Los Angeles where he’s senior vice president of program practices for CBS, the South is a familiar presence. His song on “Back on the Truck, ” inspired by Chuck Berry, references Mobile and hometown New Orleans. He and Oppenheimer, he says, have “brought musical perspectives and traditions from the Deep South” into a band whose other members hail from the Northeast. For drummer Baumgartel, who resides in Connecticut and is a technical sales consultant with Oracle, trips to visit Oppenheimer have introduced him to “a beautiful city with gracious, welcoming people.”

Adds Baumgartel, “We all love to play, but we love being together even more.”

With the sun bright on coastal waters, Diamond Reo 75 cranks up the sound, a group of 20-year-olds again at the Ono Island house pulsing with The Grateful Dead, Bob Dylan and the band’s own compositions.

At the electric piano, Oppenheimer is deep into song.

Roy Hoffman, who lives in Fairhope, is the author, among other works, of “Alabama Afternoons: Profiles and Conversations, ” and the novels “Chicken Dreaming Corn” and “Come Landfall.” royhoffmanwriter.com