Art, maybe better than anything else on this planet, manifests itself in every shape, every size and every medium. Plato argued that artistic inspiration came not from the laborers themselves, but from somewhere up above. If that’s true, many on Mobile Bay have surely felt the touch of an angel; call it immaculate convection. Artistic ability has been poured over the Bay with the intensity and caprice of an August rainstorm. Maybe it’s the geography, the natural masterpiece that is Mobile Bay, which serves as the fountainhead for the artistic waters irrigating these parts. Like recalling a hallowed family recipe, some folks here just know the way to conjure a work of art from the depths of a paint can, the static of a blowtorch or the sting of an electric needle. So, we asked, and five local artists agreed to tell us, through their work, how Bay seasoning flavors their artistry. 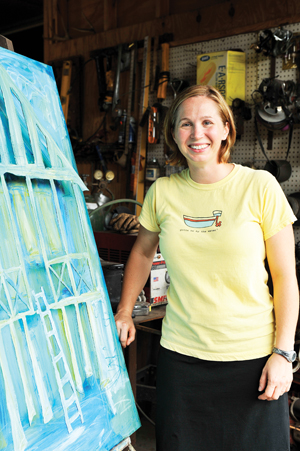 Sculptor, Metalworker, Painter
“Looking Back” is a visual and material reference to my experience growing up on the shores of Mobile Bay. The title can be literal, the site seen as you’re looking back to the shoreline from a boat. Or, it can be metaphorical, referencing our memories of growing up on these waters.

It’s obvious what the visual expression is: a pier, wharf or dock (whichever term you use) with colors and movement as light as the breeze that flows on those slow summer afternoons.

In a more physical reference, the piece’s material is a direct reflection of my trips to the shipyard as a child, a unique experience for a small person — viewing objects that were as tall as you could see, while riding by with your head hanging out of the truck window. Probably because I’m not a man, people ask how I got into metalwork, evolving eventually into large, sculptural work. For a kid who was “treated” with trips to the shipyard, steel and welding only seemed natural.

Jones mixes a variety of media to create her signature style. First, she cuts a steel sheet into her desired shape using a handheld plasma cutter (torch) and welds the piece onto the background. Then, she paints the work with exterior oil enamel, creating the striking three-dimensional effect. 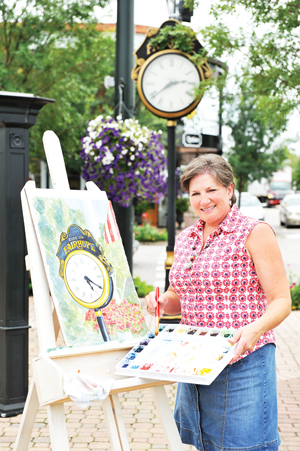 Watercolorist
In 1972, Fairhope was not a place of beauty, as people know it today. There were vacant storefronts all over town and antiquated city utilities. When my father James P. Nix became mayor, (serving from 1972 – 2000) he vowed to restore it to its natural charm, as he remembered it growing up. He wanted citizens to have the highest quality of life, so he began a beautification program which has since been adopted all over the U.S.

With the help of the city council, business owners and city employees, all of whom enthusiastically joined in the efforts, his vision to give new life to Fairhope was realized. I have so much pride in the renaissance of the city and my father’s dedication to it.

Here, Fairhope’s landmark clock, surrounded by baskets of overflowing flowers and our nation’s flag, symbolizes the quintessential quality of life in this bayside community. This is the special location where my dad initially flipped the switch to turn on Fairhope’s first Lighting of the Trees back in the ’80s. It is in the heart of our city and stands as a proud reminder of accomplishments made under the Nix era that have given the city national attention as one of the best places to live.

Cook’s book of paintings, “Fairhope Watercolor Sketches, ” is in honor of her father and benefits Fairhope Educational Enrichment Foundation. It can be purchased at Page and Palette, Yardarm Restaurant and Barnes & Noble. 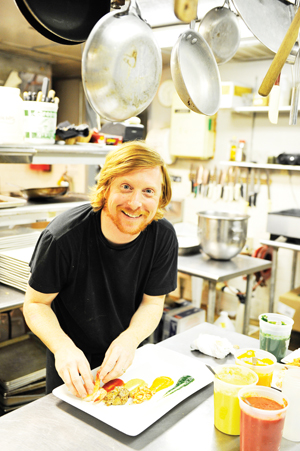 Executive Chef at The Wash House
I always hesitate to say what I do is art. To me, cooking is a skill, a craft, but not art. The artists of the food world are not the chefs. The artists are the farmers, the growers and the fishermen. Fresh, local seafood and produce at its peak is a work of art in and of itself, and as a chef, I’m thankful every day that I get to live and work in an area that provides so much of each. In Mobile and the surrounding areas, we are lucky to have an abundance of these artists, who continually provide the foundation and inspiration for everything that I, and many others, produce. Thus, I have made a tribute to those whose work I admire and strive to accentuate with my cooking. Bon Appétit! 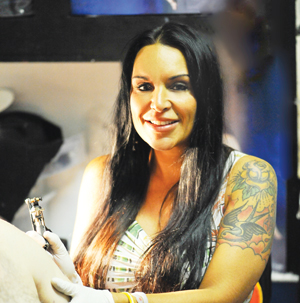 Head tattoo Artist at LA Body Art
After 20 years here, the Bay has really influenced my business. I’ve lived in a lot of places, and Mobile’s just different. In New York, I don’t think they even know the phrase “good morning.” People are just much friendlier and happier down here. And, being on the water contributes a lot to the tattoo industry. People love the Gulf, and they want to show that.

I have people come in all the time wanting a tattoo that reminds them of the Bay. I’ve done loads of pelicans, seascapes, landscapes, shrimp boats and sea gulls. I do lots of different fish. The most popular Bay tattoo is definitely the shrimp boat. People want sea oats a lot, too, which are hard to draw.

This guy came in around 11 at night to get his pelican tattoo. He was really excited, because it was his father’s favorite bird. He wanted to get this tattoo as a way to memorialize his dad. I finished it off that next morning, so it took about eight hours total.

How difficult was it to find someone willing to get a Bay tattoo for us? When we proposed the idea, Ebbole already knew of three candidates. One desired a pelican, opposite, another had always dreamed of an azalea, and a third had requested an anklet spelling out Mobile Bay’s Civil War history. 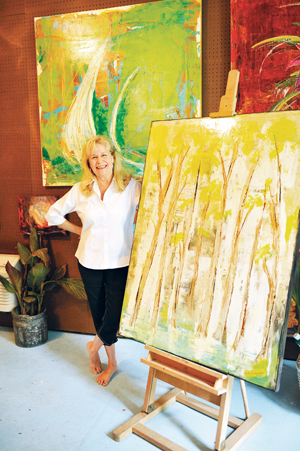 Painter, Cathedral Square
Gallery Director and Mon Louis Island Gallery Co-Owner
Whoompf! The wind fills the sails. “Grind! Grind!” yells the skipper, and you’re off racing with the wind. You can almost hear the flapping of the sails. Sailors anticipate the end of the race and the mariner’s celebration that will culminate the day’s festivities, but the true prize is the time on the water, the bow slicing through sassy waves, the spray in your face, and the true commune with nature. In “Catch Me If You Can, ” you, the viewer, are on board guiding the vessel toward the finish line. You can almost feel the wind and smell the saltwater of your imaginings.

I have spent many hours watching the Dauphin Island Regatta from the shores of Mobile Bay. Here, texture and vibrant colors are used to contrast the green earth and the emerald water with a scene interrupted only by the dancing wave runners. Oh, what a glorious, peaceful and exuberant day to be alive!

Traditionally, Tenhundfeld’s works are created with a palette knife using brilliant-colored acrylics on large canvases, but frequent experimentation with different palettes, materials, and processes keeps her efforts fresh and straight from the heart.