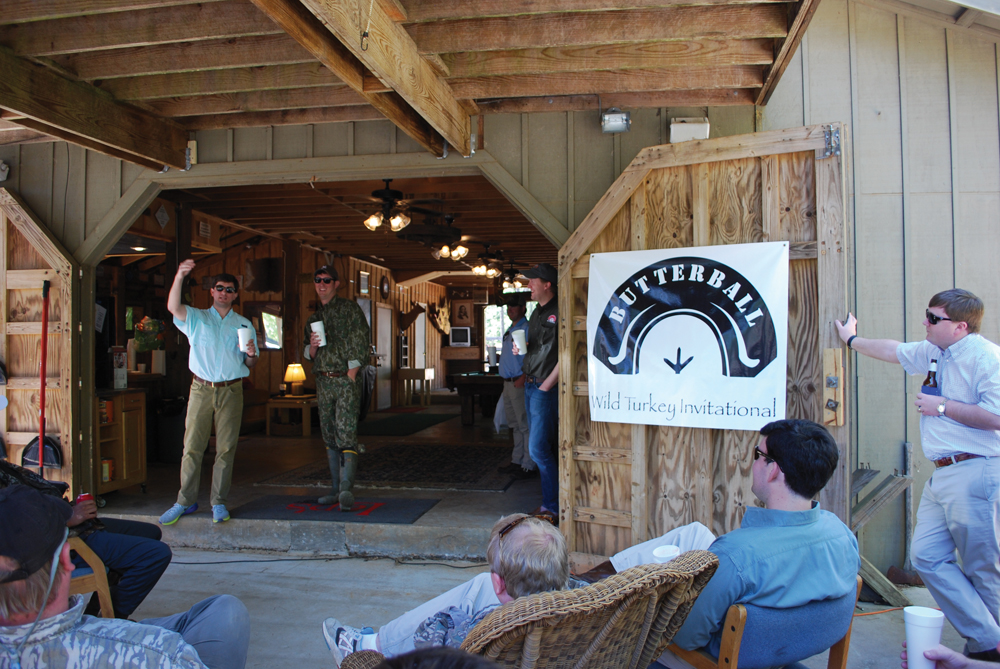 ABOVE Butterball team “Lyon Time, ” made up of Christopher Lyons, left, and Maury Lyons, right, relates the story of the hunt during the much-anticipated Turkey Tales.

A shotgun blast echoed through the woods, maybe a mile away. “Is there anything more frustrating than that?” Stuart Parnell barked, abandoning his whisper. Unlike our group of three, someone seemed to be closing in on a turkey — and close by.

A second shot followed, and glee spread across Stuart’s face. “That’s always good to hear, ” he said with a quiet laugh. “Means they missed.”

Make no mistake. Stuart wasn’t happy for the turkey’s sake. He was happy because the author of those gunshots was likely a friend of his, jockeying for a higher ranking in the 7th Annual Butterball Wild Turkey Invitational. It was mid-morning and the woods of Hybart, Alabama, were bathed in sunshine. Stuart and his hunting partner, Ludger Lapeyrouse, knew that with each passing minute, their odds of finding a turkey were fading away. So far, the only evidence that the birds woke up at all that day were those two gunshots, and Stuart wasn’t happy about it. Oh, friendly competition.

​Hybart is situated two hours north of Mobile in the hilly woodlands of Monroe County. Since 2009, the Lapeyrouse family hunting camp in Hybart has served as the base of operations for this distinctly Alabama tradition, and the 2016 installment of the invitation-only hunt has attracted around 60 smiling, camo-clad young men. Most of this group were young professionals hailing from Mobile, and all of them were repeat Butterball Invitational participants.

I made the drive up to Hybart the day before with no intention to set foot in the woods. My assignment was to observe the competition, glean some basic information from its organizers, borrow a couple Bloody Marys and determine whether the event would make for an interesting article. That night, however, as the hunters trickled in for the weekend’s inaugural “Roost Party, ” it was determined my plan was unacceptable.

“If you drove all this way to write an article, you’re going turkey hunting, ” Ludger decided.

In 2009, friends John Allgood and Allen Garstecki organized the first Butterball Turkey Hunt as a spinoff of the older Turkey Jamboree, which Allen’s father regularly attends. Their reasoning was pretty straightforward: Turkey hunting is better with friends.

The gathering is usually held at the start of April, within the six-week window of turkey season. On the morning of the hunt, teams of two have from daylight until the prearranged check-in time to shoot a turkey and return to the Lapeyrouse camp. According to the official rules, “Mutilated turkeys will not be scored. Dismembered or decapitated turkeys will not be scored. Turkeys with detached beards will not be scored.” A turkey’s score is determined by the formula “weight + beard length (x2) + total spur length (x10).” The team with the highest score wins the tournament trophy — ironically, a frozen Butterball turkey. The same turkey has been used for seven years. Needless to say, the real prize for winning the Butterball Invitational is the bragging rights.

After a stiff cup of black coffee around 4:30 a.m., we set out into the frigid, dark morning. From an elevated position known as Clay Mountain, we stood in the predawn light and listened to the woods. Stuart scratched out a turkey yelp from his slate call and leaned forward, listening. 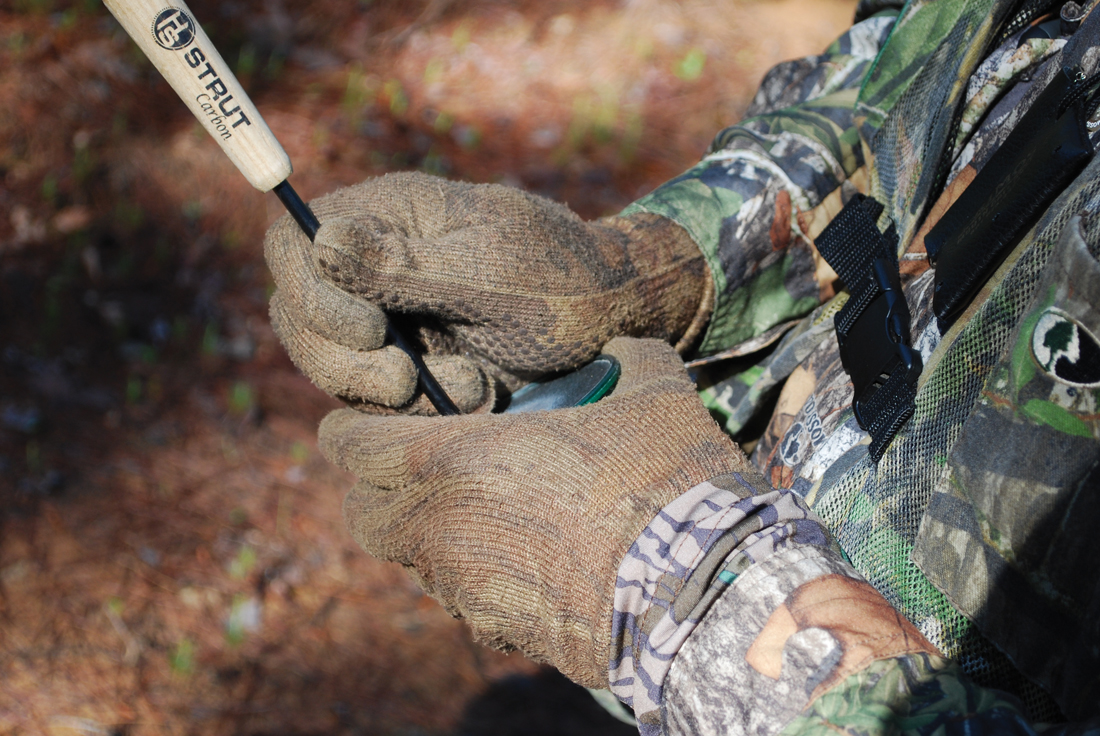 ABOVE Stuart Parnell searches intently for a response to his turkey call.

As Ludger had explained the night before, the idea is to use the call to elicit a response from a turkey roosting high up in a tree. If successful, a hunter can then determine the general location of a turkey, quietly get underneath it and call it down to the ground. After that — BANG.

But that morning, we were stuck on step one. After 15 minutes without success, Stuart switched to an owl call. Thoroughly confused, I kept quiet and watched the world awaken below us. Still, no turkey response.

When the time felt right, I asked Ludger, “Why use an owl call? Aren’t we looking for turkeys?”

“Turkeys hate owls, so they’ll often respond to an owl call, ” he explained.

I thought about that for a second. “So it’s kind of like shouting ‘War Eagle’ in Tuscaloosa?”

Ludger laughed. “Yeah, I guess it is.”

Our group of three trudged down into the trees as our window of opportunity evaporated with the morning mist. Still, no turkeys.

“It’s a beautiful morning, though, ” Ludger said. “If the hunt isn’t going well, that’s what we do. Talk about how pretty the morning is.”

For the next few hours, our luck never changed. Stuart and Ludger revisited a few successful spots from Butterballs past, but that morn, the turkeys just weren’t gobbling. The hunters grew dejected, and it was written all over their body language. I followed behind, trying to remain invisible.

As we rode back to camp, one question hung in the air so heavily that no one had to voice it: Did anyone else get a turkey? 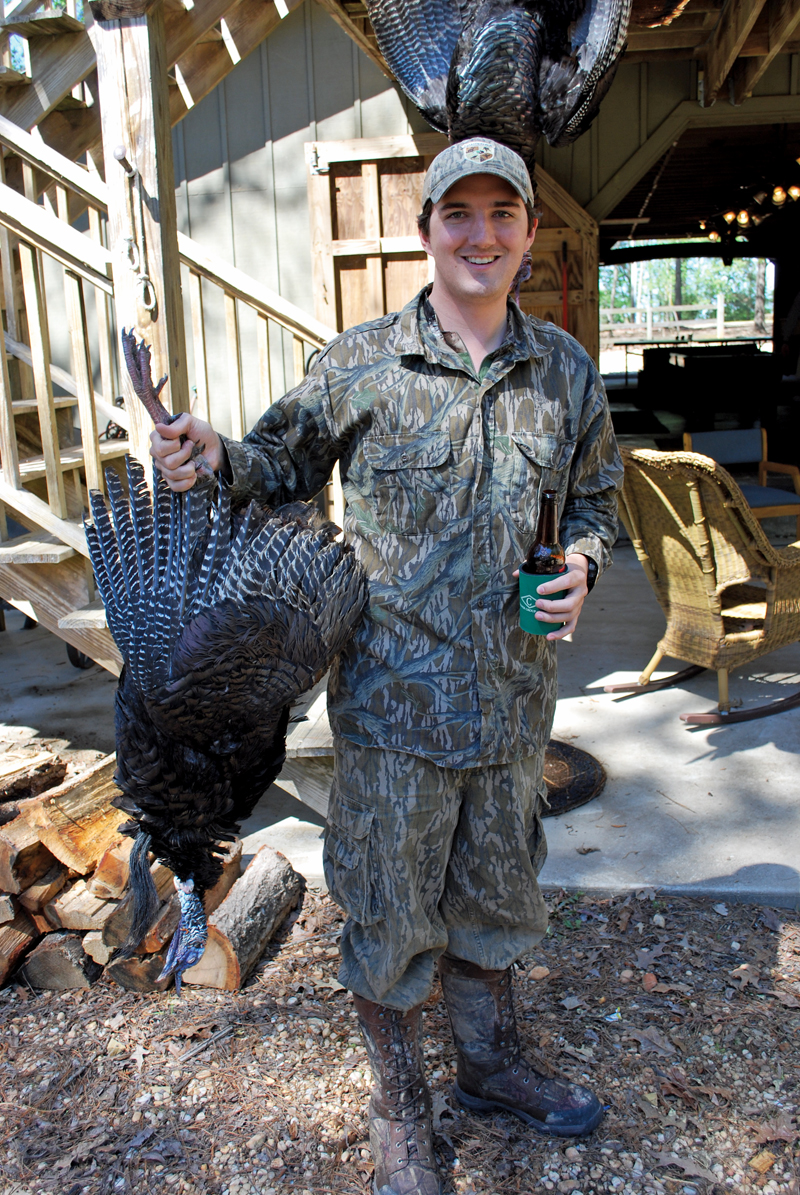 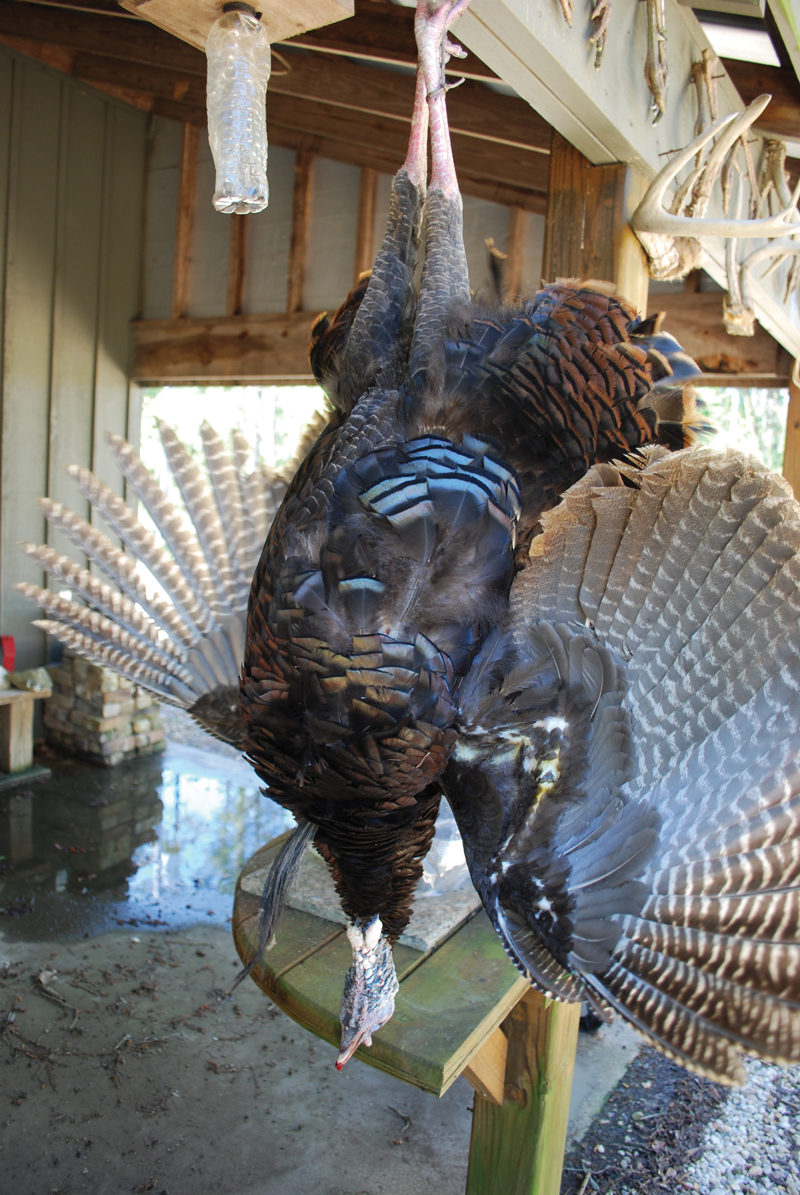 ABOVE Mobilian and former Mardi Gras king Strickler Adams returns to camp with the spoils of his morning hunt. Five birds were killed in the 2016 edition of the Butterball Invitational.

Five birds in all were brought back that morning, initiating the scoring process and a few jealous looks. Stories from the day’s quest began to trickle in, but there was a sense that the best details were being saved for later. As it does every year, the weekend culminated with Turkey Tales, during which the hunters take turns telling the juiciest (and often, exaggerated) details of the hunt.

“Turkey Tales is actually a good opportunity to learn a lot about turkey hunting, ” Butterball organizer John Allgood said. “And Robert Clement usually has a 20-minute tale that involves a brush with death. We always enjoy those.”

Over crawfish and barbecue, tales were told and truths were stretched, to the delight of all. Finally, a frozen Butterball turkey was hoisted for the seventh time by the winning team, only to be placed back into the freezer for another long year.

When it was all said and done, I found myself standing next to a hunter I had met at the party the night before. “So no luck today?” he asked.

“No turkeys, ” I responded. “Beautiful morning though, wasn’t it?”

text and photos by Breck Pappas