When I was in my early 20s, my father presented me with a set of strange looking checkers. In the box with them was the brief history of the old Chiquimula schooner as it had been written by my grandfather, a terrific historian and storyteller who passed away when I was 14 years old. Many older Mobilians will recall this ghostly schooner looming on the north side of the Causeway for years. On a low tide, one can still see the remains of her hull just before starting up the hill to Spanish Fort. -WK

A Gem in a Shipyard

In the summer of 1941, I was a naval ensign. My assignment was to the office of the Supervisor of Shipbuilding (Chickasaw) as hull and ordinance officer in charge of mine sweep and destroyer construction at Gulf Shipbuilding Company’s yards. At that time, one of the dominant features of the waterfront in Mobile was the schooner Chiquimula, then lying at Bodden’s Dock on Blakeley Island across the river from the city. Her tall spars with topmasts still shipped on all four masts were quite impressive and lent an air of old-time sailing ship days to the harbor.

Some months after my arrival at Chickasaw and well into the fateful year of 1942, every maritime facility, civil and naval, was pressed into service in support of the war effort at home and overseas. It was while making arrangements with Capt. Bodden for using his maritime railway to haul a U.S. minesweeper for repairs that I first climbed aboard the Chiquimula. She had been turned over to Capt. Bodden and Bodden Shipyard for unpaid repair bills and dockage and had been there in the dock for several years. Although badly run down, the old ship’s hull and spars and standing rigging were sound, and I wandered about her deserted decks for the better part of an afternoon. Aft, below the quarterdeck, were the officers’ quarters and cabin accommodations for four to six passengers. Here, in a little card room, was a fine mahogany table, nicely decorated and polished, and six matching chairs with carved dolphins fashioned into the arms and back supports. The sail locker forward was filled with old handmade blocks and other interesting gear. All of this induced me to suggest to Capt. Bodden that he might sell me the furniture and a few of the blocks and various other items strewn about.

A Schooner for the Ages
The Chiquimula, named after a state and Indian tribe in Panama, was built in 1917 in Seattle for the lumber trade on the Pacific and Alaskan Coasts. She made trips to Hawaii and Japan, as well as one trip to the Marshall Islands.

Sold to East Coast owners, she transited the Panama Canal in the late 20s and was in the lumber trade to Puerto Rico, where she was registered out of San Juan. She carried a crew of six forward and three officers aft. A donkey engine was forward for working sails and cargo. She was 168 feet long from bow to sternpost and had a 38-foot beam with a depth of hold of 20 feet. She drew 14 feet fully loaded to her marks.

The Chiquimula was rigged as a four-mast schooner and carried two staysails and a jib forward and topsails above her main fore and aft canvas. Her last run on the West Coast, in her youth, was logged at nine knots. I believe she was the last active merchant deep-sea sailing ship to fly the United States’ flag in the Gulf of Mexico.

Acquisition of a Vessel

After considering my modest offer for several days, the captain drew me into his office, located in the shed that housed the engine used to haul the railway cradle. There we engaged in picking oakum (pulling the tar-like substance from old ropes) while trading talk. Bodden rejected my offer for the furniture and gear and proposed instead that I buy the ship and all for $250. I found this splendid offer impossible to turn down. Without further thought, I accepted, placing a modest $10 deposit to bind the trade. In those days, an ensign, U.S. Navy, made $125 per month. Even in those glorious times when 5 cents bought a loaf of bread and cigarettes were a nickel a pack at Navy stores, I knew I would have to have help to handle the trade. Out of the $125 per month, I had to support a wife, two children, a cook, a car and still have a bit over for emergency.

Therefore, I enlisted N.W. (“Dutch”) Markel and Bill Ellis, both ensigns, U.S.N.; Clem Bennings, Army; and William Agee, lawyer (eventually Army). Together we formed the Grand Cayman and West Indies Trading Company Inc. Agee did the legal work, and we were soon officially in business. One of the first results of our incorporation and the publishing of the fact in the Mobile Press Register under “Legal Notices” was the appearance of numerous salesmen, all doomed to disappointment, wanting to sell us all sorts of useful and exotic office or seagoing gear. A number of people leftover from the draft also applied for jobs and were likewise disappointed.

Our object was to take our prize across Mobile Bay to the Baldwin County side and there bring her to a permanent dockside berth to be used after the war was over as a marine museum or possibly a restaurant and tourist attraction. With our limited capital of $1, 000, $250 of which was already invested in the cost of the ship, we had to execute some fast footwork to move her to a suitable location.

Some arrangements were made with the Forster brothers, Herb and Walter, of Fairhope, and their father, an old sailing shipman, to berth the ship in an arm of the Blakeley River. It was opposite a property of theirs called the Mecca Filling Station on Highway 90 at the end of the Causeway. 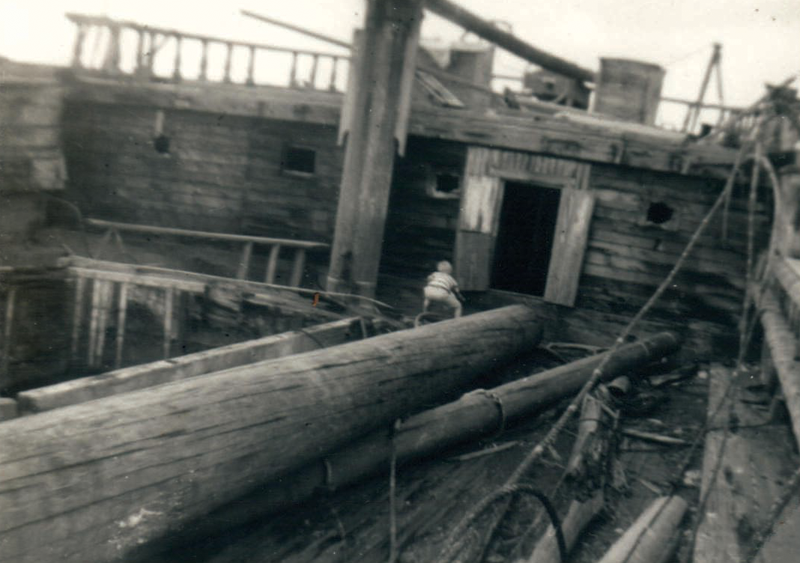 ABOVE A young Albert Key Sr. peers curiously into the old ship after it was damaged during a hurricane.

The next step was to find a way to get the ship to her new berth. At first, this seemed easy, but it then appeared that the latest charts of the area we wished to traverse were Union revisions of English maps made in 1818 and used in the Civil War by Yankees at the Battle of Blakeley. This called for consultation with local fishermen, the Coast Guard, U.S. Engineers and some interesting evenings in an open boat with lead line going forward for hours at a time around such landmarks as Old Blakeley, King’s Battery, Long Boat Reach, Polecat Bay, Dead Man’s Tree and others equally obscure. Finally, the practicable route was mapped, and two fathoms were found from Bodden Dock, up the Mobile River, down Spanish River, up Middle Alabama River, down Blakeley River and into Blakeley Slough at high tide. This left us a couple of feet to spare in tight spots as we drew 9 feet at our deepest draft, which was aft near the sternpost.

The question was who would undertake to tow us the 35 miles up and down the Delta to get us the six miles across the Bay? Every tugboat captain in the area turned us down. Nobody had taken a ship into those waters since the Civil War. Finally, Capt. Jackson, of Jackson Hope Towing Company, took pity on us and not only agreed to tow us across the Bay, but for cost of the fuel alone, just for the fun of it and to help save the old schooner.

Accordingly, the great day dawned bright and clear. It had to be a Sunday to avoid conflict with towing company work and Navy business. We were all at Bodden Dock, a couple of guests included, at 5:30 a.m., and with the tug alongside we cast off and began the Chiquimula’s last trip.

We steamed about six knots upriver to the draw span on old U.S. 90 where we came to a stop. The span was run to the top with the bridge tender lying on his stomach on the bridge deck to be sure to see that the topmasts would clear the bottom of the draw span. We crept forward at about half a knot and cleared the span by 14 inches. It was low tide.

Safely by this hazard, we ran down Spanish River to the shoal ground where the Alabama River runs into the Bay. We negotiated this obstacle with some skill and luck, as the tide had begun to rise. Then we proceeded up the Alabama. We ghosted along under bare poles, through the swamp and late morning mist. A break in the haze revealed a couple of fishermen having a quiet morning snort from a brown jug. They took one look at us and threw away the jug.

The trip continued as smoothly as a pleasure cruise, and by 3:45 p.m. we had entered Blakeley Slough and anchored, awaiting high tides to shift into our final berth. Jackson Hope’s tug and its brave crew returned to Mobile — the heroes of the adventure. 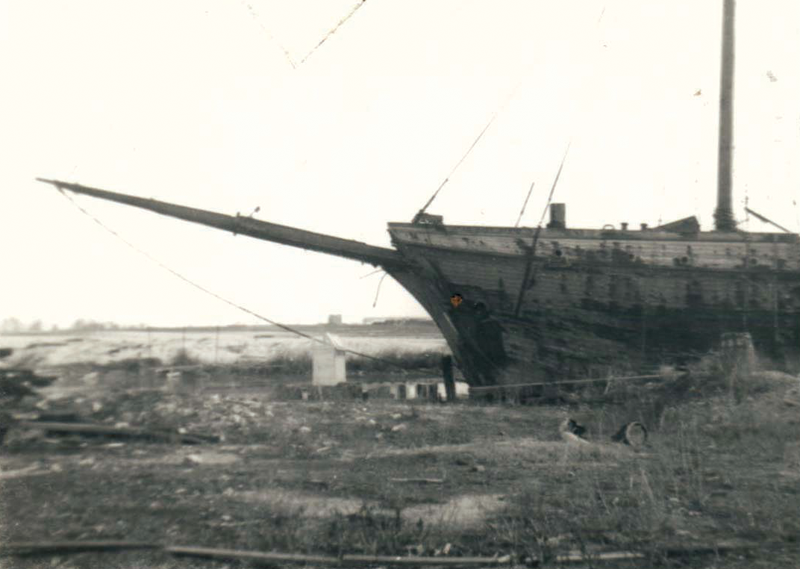 ABOVE The ghostly bow of the Chiquimula looms over the Causeway from her final resting place.

Some weeks later, we were able to bring the ship into our berthing place. We allowed her to sink to her light water line where she remained for the war years while the stockholders of the Grand Cayman and West Indies Trading Company were scattered far and wide, serving in the Army and Navy from North Africa to Australia.

After the war, we were too busy getting reestablished, Agee in Mobile, myself in Texas, and Bennings, Ellis, and Markel in New Orleans, to give much time to our old schooner. Still, we had plans to go ahead with our original design. A hurricane took three of her masts overboard, and she took on a decided tilt. We were just about ready to move forward when someone went aboard one night and set her afire. And there the Chiquimula burned to the waterline.

FINS TO THE LEFT BEHIND
My grandfather wouldn’t have known to highlight another interesting connection to the Chiquimula, for Jimmy Buffett was not yet born. Buffett’s grandfather captained the ship from 1924 to 1927. In the musician’s book, “A Pirate Looks a Fifty, ” he mentions sailing with his grandfather on the Chicimunga. While the spelling is different, and the timing makes Jimmy’s ride impossible, one can imagine that his own grandfather’s storytelling had a lot to do with his creativity and love of the sea. -WK