It’s exhibition opening time at the Mobile Museum of Art. Paintings, photos and tapestries quietly await the curious and eager gaze of the public. Galleries with low mood lighting create ambience, the calm evoking a sense of quiet revery. In this space, one would be forgiven for forgetting that these works of art don’t simply appear on the walls by magic. Once exhibitions are planned and artwork is selected, someone has to put it all together.

Meet the preparators. Pronounced pre-PAR-a-tor, the job title, probably unfamiliar to most, warrants a deeper look. It’s museum lingo for exhibit technician, the hands-on worker who deals with just about every aspect of the exhibition prep.

To most, an art exhibition begins on opening night. For the preparators and their team, though, it’s the final reward for years — yes, years — of work.

Kurtis Thomas, manager of curatorial affairs, alongside PR manager Glenn Robertson greet me in the glass-walled lobby. Next thing I know, I’m whisked downstairs through the maze of hallways in the basement to see how it all comes together.

The process, while long, is fairly streamlined. Contracts are often signed up to three years in advance for shows coming from other museums or art lending institutions. If the museum wants to put together an exhibition from their own collection, they sift through the museum’s inventory of more than 10, 000 works and put together a capital-L List of possible items.

“Should I tell her the saying?” Thomas says, turning to Robertson, who gives him a reluctant look; Thomas takes no heed. “Oh, I’ll tell her: We live by the List, and we die by the List.” And he’s not exaggerating. Everyone has a copy of the ubiquitous List, and they refer to it often. It’s their road map to the exhibit that, at this point, exists only in their minds.

After the works (from the museum’s collection or on loan) are chosen, photos of the artwork are shrunk to scale and printed out to populate a mini three-dimensional gallery. Built from raw, unsanded wood, the model sits in the registrar’s office. It’s precisely to scale — one inch equals one foot — and gives them the chance to act by what they call best practices. “The less we move the art, the better, ” Thomas explains, standing over the micro museum. “When you move something, that’s when danger can happen. A lot of problems get solved here before I ever open the crate with the art.” 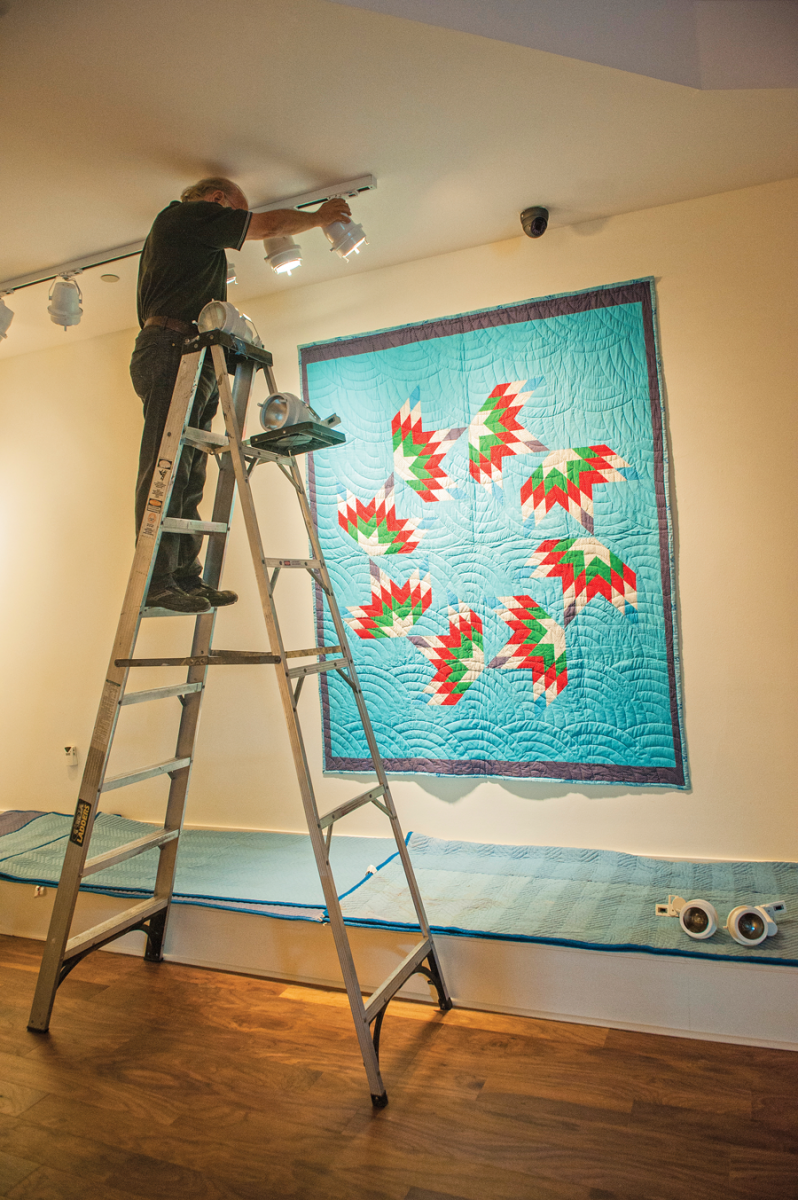 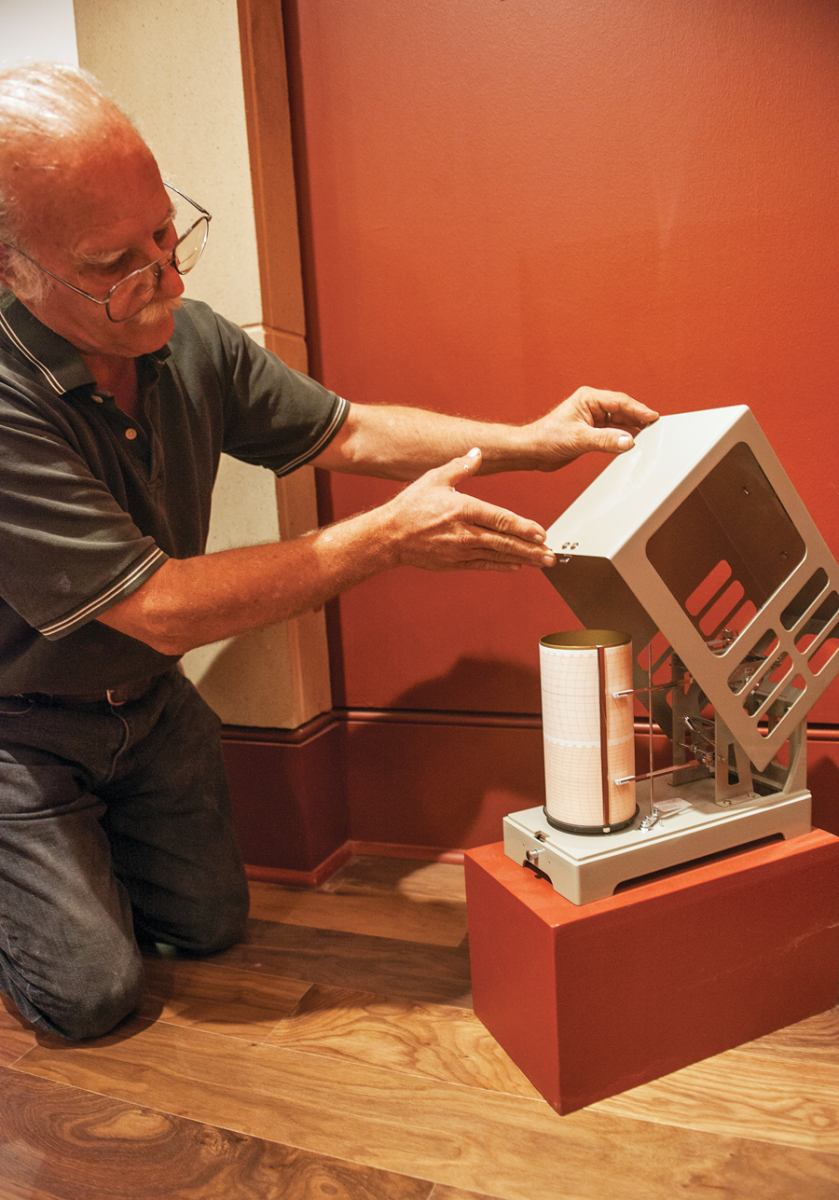 ABOVE LEFT Reinsmith adjusts the lighting on another wall hanging in the Native American exhibit, which is nearly complete.

Once art is delivered to the museum (via special couriers called fine arts shippers who are insured and trained to ship this precious cargo), the finish line is in sight. Galleries are cleaned up from previous exhibitions; tasks such as spackling nail holes, tearing down old vinyl lettering and repainting walls are all a part of the preparator’s duties between shows. Then, based on the 3D model in the basement, the art is brought in and arranged with minor changes made as needed.

The very last step? Adjusting the lights. Even that’s not nearly as easy as it sounds. “Light can damage works of art on paper over time, ” Thomas shares. “These are halogen lights. Some of them have screens on them, and we also control the wattage.” Contracts with lending institutions often stipulate light usage for a particular piece. Robertson explains, “Some lenders will only let you even keep the art for a certain period of time because they’ll put them back in storage between shows to limit their light exposure, to protect the art.”

So next time you’re hanging around the galleries at quitting time, don’t be surprised if you begin to notice the lights turning off one by one. As Kurt explains, “If we close at 5 o’clock, we’re turning off the lights at 5:01. It’s all to help protect the art.” 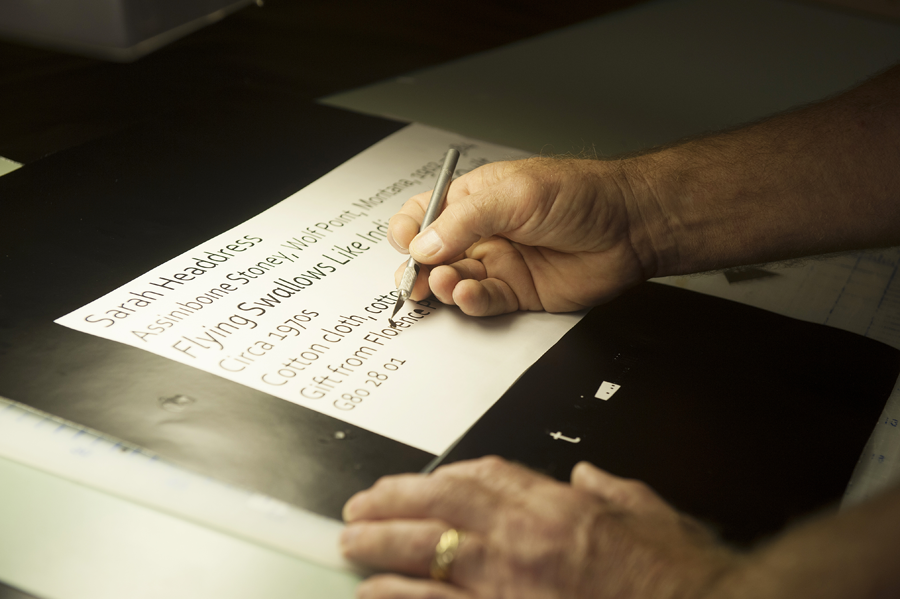 ABOVE Klooz cuts out the vinyl letters, a process called “weeding, ” to prepare them for application to the wall.

The Heart Of The Art

As I tour the usually off-limits portion of the museum, every so often I see a person pass by, focused and on a mission. These are the preparators. Jeff Reinsmith is one of them, and just a few of the jobs I witnessed him perform during my visit include adjusting the lights in the gallery, cutting placards for the displays, checking humidity and temperature and finishing up a pedestal display in the carpentry shop. And, as he bashfully opens up about his own artistic pursuits (intricate origami), Thomas mentions that most people working in the museum are some kind of artist. They have all been drawn to work at the museum because of a shared passion.

On my tour, I’m lucky enough to meet the museum director, Deborah Velders. While chatting with us congenially, she makes a comment that perfectly illustrates the whole process I’ve learned about today.

“Something about art makes people feel like we’re just decorating, ” she says. “The public thinks we just hang pictures and people stand around to look at them. That’s how all the arts are, really. Ballerinas have bleeding toes, but on stage they look ethereal. It’s the nature of the arts to present the end result as though it were effortless. That’s the whole idea: for people to have a sense of pleasure and calm and an escape to another world.”

Sure, the museum displays artwork, and people come to appreciate it. But perhaps the biggest, most encompassing art within the museum are the exhibitions themselves, the actual physical arrangement and the process by which they come together. Painstakingly researched and arranged, caringly written about and assembled, then excitedly shared with the world: sounds like art to me.