A hundred years ago, it fell on Mobile and Fairhope, on Bay Minette and Citronelle, like a seventh-year gift from heaven, and we were ready for it. Maybe even greedy for it.

When longleaf pine and the unique forest it made were the earth and sky of cities around Mobile Bay, the longleaf seedfall was long awaited. No one could say precisely when it would come or why. But when they noticed a pendulous crop of green cones developing once every decade or so, they knew an explosion of life was imminent along the Gulf Coast.

This month, one of the heaviest seedfalls in 50 years will rain down on us, turning sparse lawns into carpets of green seedlings fattening birds and squirrels and old-timers who remember the flavor of plump pine nuts, reminding us how much of what we value here on the coast – our gardens, our wildflowers, our wildlife, our culture, our architecture, even our cities – we owe to longleaf.

Longleaf, those who know our history recognize, isn’t any ole pine. Pines like loblolly that now dominate so much of Alabama offer no hint of the beauty and richness and light that were once part of the longleaf forest. Longleaf once covered more than 90 million acres of the southeast. It now stands on little more than 3 percent of its original homeland.

The loss of longleaf from our cities and our forests, which started in the late 19th century and continues to this day, has been far more devastating to the Southern landscape than civil war, cotton or kudzu.

Where there are now dark, claustrophobic stands of water oaks and red maple, it’s hard to imagine that open, light-filled longleaf savannas made people from all across the country want to settle in once remote places like Fairhope, Citronelle and Spring Hill.

All across the South, communities in the longleaf belt sold the unique quality of life under longleaf. It was not only the beautiful forest, not just the world’s most desired timber. It was the healthy forest, a place where you could breathe and convalesce, free of the allergies, miasmas and dankness that plagued so many American cities and forests.

Over in New Orleans, they launched a special boat so people could slip across the lake and enjoy the clean, cool air of longleaf in Abita Springs. Longleaf resorts stretched across the South, from Crystal Springs, Miss., to wealthy resort communities like Thomasville, Ga., Aiken, S.C. and Southern Pines, N.C., where a longleaf refuge for the nation’s ultra-rich became home to the world’s first golf resort.

Southwest Alabama was home to one of the richest longleaf forests in North America, so it’s no surprise that resort cities sprang up all over our piney woods.

Citronelle advertised the healing powers of its longleaf forest in New England newspapers and became a popular destination for affluent New Yorkers and proper Bostonians. Spring Hill’s attraction to summer-weary Mobilians was partly about the hill, perched above the swamp. But the longleaf forest that once sat upon that hill was a green Parthenon, where breezes drifted freely through the pine-scented air.

Fairhope now sees itself as the city by the Bay. But in the 19th century, there were thousands of miles of coastline where one could tinker with utopia. You have to reckon it was the sight of those longleaf columns, lifting the sky high above the bluffs, that made them dream: It could be here. It should be here.

For most of the 19th and early 20th centuries, Fairhope’s longleaf forests were some of the most famous in the country, showing up repeatedly in books and magazines.

Bobby Green, a world-renowned camellia breeder from Fairhope,  remembers when his father started a nursery business under longleaf. Early on, Bobby learned how the unusual light of the longleaf forest transformed the way we think about gardening, and made gardens around Mobile Bay some of the world’s most famous.

Fairhope’s once great longleaf legacy hangs by a thread, restricted to a small square of the city where some residents grumble that it ought to look more like the bland scrubscapes slapped in every mall parking lot.

This month, appropriately enough, the national conference of the Longleaf Alliance will be meeting in Mobile to help map the future of this tree and its forest. They’ll be watching seedlings fall on Mobile and Fairhope, on Stockton and Foley, at least where we’ve left any mature longleaf standing.

Each seed has to survive birds and squirrels and, most of all, our own misunderstanding of what makes a forest grow and a garden bloom. If longleaf falls in the thickets we now draw around our cities like some kind of haunted fortress, it hangs and dies. If it isn’t welcomed by bare ground, prepared by fire for the rain of longleaf, it withers in days.

It’s the greatest longleaf seedfall in half a century. I hope we are ready for it. I fear we are not. Maybe if we start now, our children will have opened their eyes and hearts to longleaf, whenever the next seedfall comes. 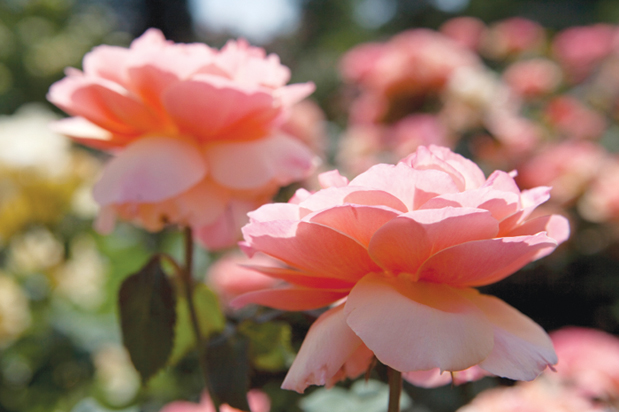 Bloom of the Month
Rose growers, forget spring. Fall is the best season for these radiant flowers along the Gulf Coast. Dry days, cool nights and low lights work together to intensify rose color, bloom and fragrance. They’ll just get more beautiful until the first frost of December.

Signs of the Season
Here they come, squadrons of giant birds, the white pelicans returning to the Gulf Coast and bringing fall with them. When you see them hover over the Delta, get your bait and pole. The speckled trout are following the clear Gulf waters into the heart of the Mobile-Tensaw Delta.

Lawn Lust
Don’t listen to sharks who try to sell you “winterizing” fertilizers. They’re just trying to get in your pockets. This is the worst time of year to fertilize the lawn. But it’s a great time to start a new lawn. Just water well during the dry days of October, and this winter it’ll take care of itself.

Planting
From now until April, you can be picking fresh lettuce, greens of all sorts, broccoli, kohlrabi and other cool-season crops every day. But days are getting short, so plant them now. And don’t forget to sow sweet peas, hollyhocks, poppies and other overwinter annuals for a great spring show.

October 17 – 19: Native Plant Sale
9 a.m. – 4 p.m. The sale will offer native trees, shrubs and perennials as well as many heirloom southern plants. Experts will be on hand to answer questions.