It Starts with Sidewalks

Attracting businesses and residents to properties along Old Shell Road, which spans almost 11 miles and runs through countless residential areas, requires walkability. That’s why the nonprofits The Village of Spring Hill and Midtown Mobile Movement are making sidewalks a priority.

“When we asked 600 Spring Hill residents in 2008 what projects we should prioritize for the master plan, the No. 1 request was sidewalks, ” says Linda St. John, board president of The Village of Spring Hill, which was founded in 2006 to improve the pedestrian, aesthetic and commercial amenities of the Spring Hill community.

Since then, four sidewalk projects along Old Shell Road have been completed, and two more are slated to be finished by the end of this year. These projects also revitalize streetscapes. Flowers, trees, pavers, crosswalks, lighting and benches have been added.

“I’ve had people tell me they never knew their neighbors until we put the sidewalks in, and then they met on a walk and are now great friends, ” St. John says. “There’s a freedom they didn’t have before.”

Infrastructure improvements are also proven to reduce crime. “Nobody is going to rob a store when the area is well-lit and people are constantly walking by, ” she says. “Sidewalks really do improve quality of life.”

“There has been a huge opening up in the Spring Hill real estate market since we started the sidewalk projects, ” St. John says. “People look at certain areas differently now because of the connectivity.”

Renovations are also in the works for the Rouses shopping center at the intersection of Old Shell Road and McGregor Avenue. Details are still being finalized, but developer Philip G. Burton of Burton Property Group says he hopes to begin work on the project by January 2019.

“As a fifth-generation Mobilian who has lived in Spring Hill and shopped in that shopping center my entire existence, I jumped at the opportunity to be able to take this great piece of real estate in a wonderful community and give it a facelift, ” Burton says. “We are looking forward to unveiling our plan soon.”

Burton says there will be more space for new tenants as well as improvements to the appearance of the shopping center.

“We are excited to work with Mr. Burton to help him tailor his redevelopment into a village concept that works with the Village of Spring Hill master plan, ” St. John says.

When The Village of Spring Hill finishes its projects, there will be a complete sidewalk network on both sides of Old Shell Road from I-65 to University Boulevard.

Traveling east of I-65, Midtown Mobile Movement, a nonprofit working toward similar goals for Midtown, has secured grant funding for sidewalk projects of its own as part of its Design Old Shell Road initiative.

“We’re trying to create a solid, safe connection for pedestrians from I-65 all the way to downtown Mobile, ” says Sam Dennis, cofounder and board member of Midtown Mobile Movement. “We’d like to cut down on the distance people have to drive. We want to accommodate the vehicle and the pedestrian.”

Dennis says it was important for his organization to make sure its plans for Old Shell Road fit with the rest of the city and that improvements are built to last. 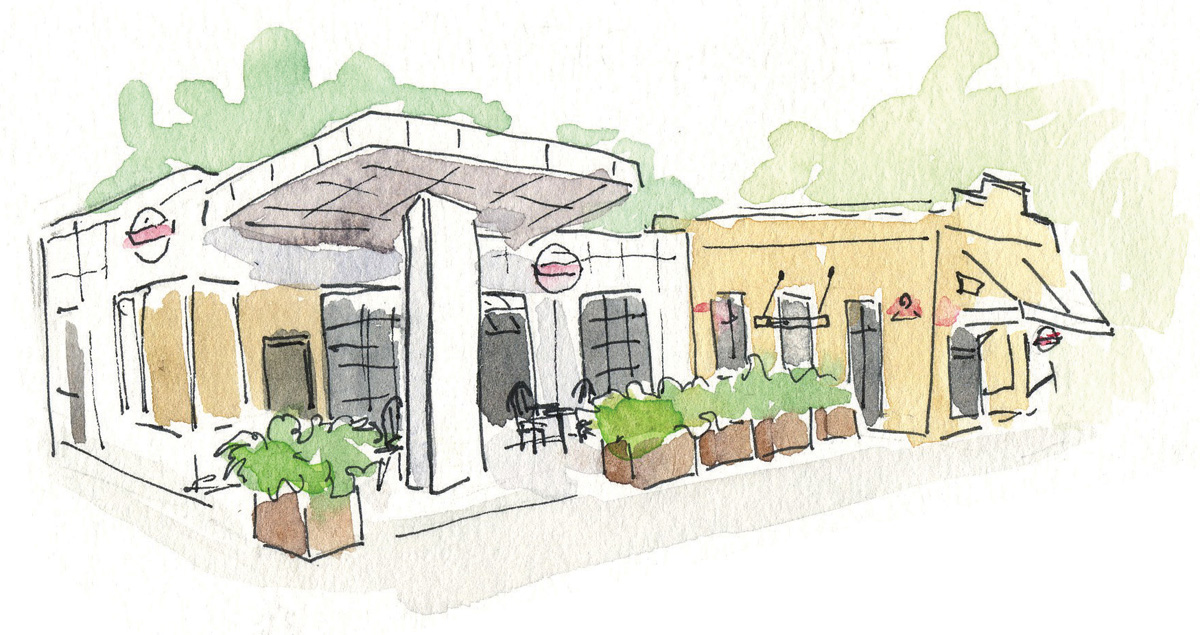 At the top of Spring Hill across the street from Lavretta Park sits a ’40s-era garage. After years of vacancy, Rester Brothers Auto Repair building is being repurposed into a breakfast and lunch restaurant called Maple Street Biscuit Company. Owners Todd and Jeff LaCour of C’est La Vie Holdings say Spring Hill is in need of a family-friendly breakfast spot.

Maple Street Biscuit Company has more than 20 locations all over the Southeast and is well-known for its use of quality, house-made ingredients and for tailoring each location to fit the community surrounding it.

“We are excited to be part of something that will continue to transform the area into a more family-friendly, walkable community, ” says Todd LaCour. “It’s going to be amazing to see more families use the new sidewalks to walk to the restaurant and Lavretta Park.”

The building will maintain its service station architecture but receive a complete renovation, including a new roof and an additional 1, 500 square feet. The project is scheduled to be completed in the fall.

“We definitely believe this is something people are going to be proud of and really enjoy having in their neighborhood, ” Todd says.

In 2016, Bill and Erna Whiston purchased the property with a dream to create a community gathering place while maintaining the building’s history and integrity.

“I was running with a group one morning, and we met at UMS, ” Erna says. “I’m not from here originally, so I asked the group why that interesting building was just sitting there. They told me it had been vacant for 15 years. They saw an eyesore, but I saw an incredible opportunity to create a space that could bring everyone together.”

It took several years of environmental studies as well as meetings with city and state groups and politicians before the Whistons were able to purchase the property. Then, they hired McNair Historic Preservation and embarked on the painstaking process of renovating the historic building and qualifying it to be placed on the National Register of Historic Places.

“We achieved that goal, and what that means is the property qualifies for state and federal historic tax credits, ” says Stephen McNair, owner of McNair Historic Preservation.

Renovations included a new roof and a complete gutting of the building. The project will be finished this summer.

“We took the building down to the cinderblocks, ” Erna says. “We wanted it to be fresh and clean, but really wanted to maintain the original structure and character. I had three different contractors tell me I should just bulldoze it, but we didn’t listen and got it done.”

The building has over 13, 000 square feet of space and room for at least eight tenants. Space is still available, and the Whistons are searching for businesses that will create a community atmosphere, such as restaurants, coffee shops, art galleries or salons.

“So many people are excited about this project, ” Erna says. “I had no idea the building meant so much to this community when we started this journey.”

And what about the little boy painted by Priest, a local graffiti artist, on the side of the building? Erna says he’s definitely staying put.

With the addition of a new Publix, spaces for several retail shops and improvements to infrastructure, the intersection of Florida Street and Old Shell Road is set to become a popular destination for Midtown residents.

“Once all of the tenants move in, it will be the place to be on a Friday night — there are some really cool concepts on the way, including Taco Mama, the first Alabama location of Simple Greek, a pizza place and a coffee shop, ” says John Vallas, a real estate broker and developer. “Publix will generate at least 2, 000 customers a day, and all the other tenants will benefit.”

Vallas says it has traditionally been difficult to attract tenants to developments east of I-65 because traffic studies don’t reveal the unique potential of the Midtown area.

“There are stretches along Old Shell Road in Midtown where population density is as high as anywhere else in Mobile, along with incomes that are very appealing to national retailers, ” Vallas says. “And more people are wanting to move to Midtown. Old Shell Road is the next big opportunity to invest in the community. There are more projects happening right now on a 4-mile stretch of Old Shell than just about any other area in the city.” 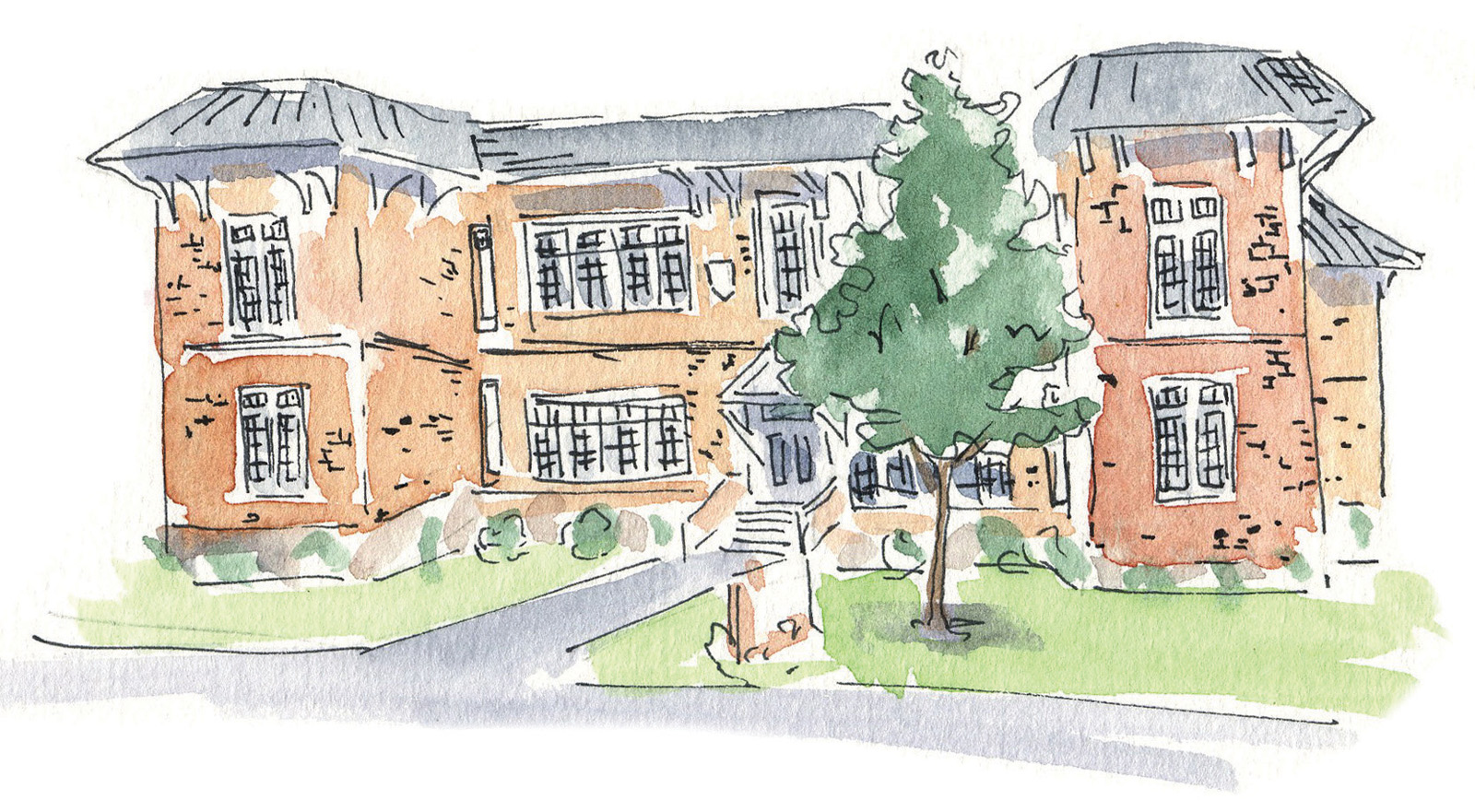 The school building that now houses Old Shell Lofts was originally constructed in 1915. From 1989 to 2012, it was home to Old Shell Road School of Creative and Performing Arts.

After Pace Burt & Associates purchased it, the building underwent a complete renovation and was repurposed into high-end housing. Old Shell Lofts opened in January 2017 and has 23 occupied units, with each classroom serving as an individual apartment.

“When we started the project, we quickly realized how meaningful the school building was to everyone in the area, ” says Taylor Atchison of Atchison Properties, who was part of the project’s development team. “It seemed like everyone had a relative or someone they knew with a connection to the school.”

The nostalgia associated with the building and its turn-of-the-century architecture inspired the team to retain as much of the building’s original framework and character as possible.

“We were able to maintain the scale of the classrooms and hallways  — each apartment has 12-foot ceilings, exposed brick and huge windows, ” Atchison says. “Then we added really modern finishes to create a comfortable space.”

“We’ve been at 100 percent occupancy since we opened the doors, ” Atchison says. “It’s popular with young singles, medical students and even empty nesters looking for a simpler lifestyle.”