In the old folk tale, “Stone Soup, ” a soldier comes to town with nothing but a rock and a pot of water. He sits down and starts making “stone soup.” Townspeople ask him what he’s doing, and he tells them about the savory soup he’s stirring. He adds, however, that there is not enough to share unless the others throw some of their own ingredients into the pot. The scenario is repeated until there is a feast for all.

That concept sparked the soiree Elizabet Elliott organized about three years back that has now become a monthly (or darn near so) ever-changing potluck. Elliott, a cofounder of community arts organization The Rumor Union,   along with several of her colleagues, fellow artists and friends, get together and contribute to a stone soup supper. The gatherings have a core base from The Rumor Union but are open to all. “It’s the idea of making something out of nothing, ” says Joelle Rosen, another of the organizers. The price of admission is $5 or an ingredient suitable for the stockpot. (Nonperishables are preferred, according to head chef Elliott, since the soup is made in advance and ingredients brought to the Sunday evening affairs are usually saved  for the next month’s meal.)

“It’s always interesting to see who comes and what they’ll bring, ” Rosen says. “One time someone brought fresh deer meat that we used for the next month’s soup.” (An exceptional goat cheese and deer dumpling stew was the result.) Some of the culinary concoctions have included snapper green curry, watermelon gazpacho, bouillabaisse and borscht. Elliott says the group usually plans for anywhere from 10 to 30 attendees. “There is a small group of regulars, but almost every event is different. We encourage members to bring new people.” We have had big nights, small nights and all walks of life in attendance.” Rosen adds, “It’s just a great way to get creative people in the community together to eat and hang out. It’s also a casual way for people who are new to the area or to the culture of Mobile to meet people. Sometimes you meet someone whom you end up collaborating with on projects in the future. It’s all pretty amazing.”

Here is Elliott’s unique take on a classic potato soup, sure to satisfy a crowd.

1. Pour the cream into a container and drop in one peeled shallot, the bay leaves and one bundle of thyme to soak for at least an hour.
2. Heat the butter in large stockpot over medium-high heat and sweat the onions, chopped shallots and leeks. Add a pinch of salt until onions are soft and translucent.
3. Add the mustard seeds, coriander and the other bundle of thyme.
4. Turn up the heat and add the cup of white wine. Reduce by half.
5. Add the chicken stock and the potatoes and simmer until the potatoes come apart with a fork. (Don’t overcook.) Strain and add cream-shallot-thyme mixture.
6. Puree with either a submersion blender or freestanding food processor. Have an ice bath ready.
7. Add the pureed liquid to the pot and submerge the pot in ice water. Add salt and white pepper to taste, more liquid if necessary. Allow to chill. Serve cold with fresh chives and crème fraîche. Serves 15 – 20.

This glorious, lush soup is ideal for autumn.

1. Preheat oven to 375 degrees.
2. Cut off the top of the pumpkin and scoop out all the seeds.
3. Drop one stick of butter into pumpkin along with the coriander, cardamom, clove, chili peppers, fennel and some salt.
4. Put the lid back on the pumpkin and bake on a cookie sheet in the oven for an hour.
5. Remove and let cool at least 30 minutes.
6. In a stockpot, sauté onions, bell peppers and carrots with remaining stick of butter.
7. Once softened, add stock and pumpkin flesh scooped out of the shell to stockpot.
8. Add curry paste and coconut cream to the pot. Puree and serve hot. Serves 10 – 15. 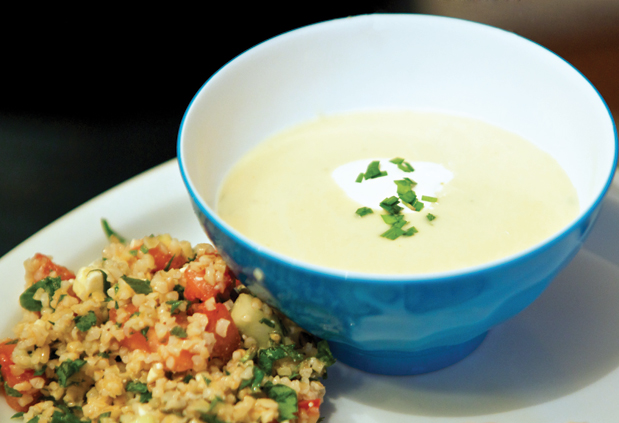 This traditional Middle Eastern specialty makes a marvelous side. One of the guests brought it to a recent Stone Soup event.

1. Combine all ingredients in a bowl and serve at room temperature. Serves 8 – 10.

To participate in the festivities, join the Facebook group “Stone Soup Sundays” or sign up for the newsletter at The Rumor Union website. The Rumor Union is a grassroots organization that is all about community and art. Check them out at rumorunion.com.