Brad Robertson occasionally paints as small as an 8-by-10-inch canvas. But he is far more likely to be applying his water-based acrylic paints to custom-built canvases as large as 4 feet wide by 8 feet tall. The reproductions presented here show basic composition, color and tone, but they cannot fully convey the depth, the sense of history, or the character that Robertson strives so hard to reveal in the originals’ heavily textured surfaces. Even in person, the viewer must at times move in really close to appreciate, for example, those little splashes of red riding more solidly applied blacks. Visual elements such as these have become as ubiquitous to Robertson’s recent work as the horizon lines of his landscapes. They are not literal landscapes, of course. He makes no attempt to translate a specific scene into corresponding marks on the canvas. But these images do emerge from an imagination nurtured by the woodlands and bays and watery sunsets Robertson grew up beside in coastal Alabama. And, he says, the label also provides a starting point for viewers’ explorations.

Robertson was understandably indecisive when asked on short notice to schedule an interview and photo session, preferably amongst recent paintings in his studio/gallery. He and wife Courtney were awaiting the imminent arrival of their second child. (Little Maeve was born two days after my call.) I had also caught him in the midst of a move, in between the demise of his well-known Dauphin Street gallery and its rebirth in new Oakleigh Garden District digs.

We met in a large exhibit space that already had been nearly stripped of the visual clues I had hoped would enlighten the verbal account of art and artist that I planned to record. Perhaps two dozen paintings leaned against a back wall. But they'd not been stacked there for my benefit; the move had allowed their escape from the private storage area where Robertson banishes paintings that just aren't working for one reason or another. Almost none of them were finished. A few, he said, never will be. Others, when completed, months or even years from now might be altered beyond recognition. Still, they provide a valuable glimpse into Robertson’s seemingly laborious style of painting.

The vast majority of his paintings eventually “reach the door” — but only 10 to 15 percent do so without ever enduring an extended time-out. He reworks each canvas repeatedly. Years of experimentation have lent
an air of predictability to the layering process by which Robertson constructs his paintings. Close inspection of built-up areas along the ever-present horizon line in one of Robertson’s massive paintings sparks thoughts of deteriorating frescoes on some Mediterranean isle.

My impression, he says, is no accident. “That’s where I'm going with these, ” he explains. “I want them to look worn and aged and flawed and just stressed, and yet soothing.”

Road to the Canvas

Robertson’s introduction to painting came early. By middle school he was occasionally entering art contests. But he enrolled at Auburn University in 1999 expecting to become an architect. “I changed my major several times, ” he says. “It was architecture, industrial design, and then graphic design. I finished in graphic design.”

At Auburn, Robertson’s interest in realism waned, and he began to explore abstraction. Once armed with a bachelor of fine arts degree, his focus shifted from making art to earning a living. He moved to Atlanta where his new circle of friends included recent Savannah College of Art and Design graduates. “They kind of laughed at my work from college, ” he recalls. “They didn't think it was very good. And that was one more reason to not paint.”

He soon tired of Atlanta traffic. “I came back here to regroup, to figure out where I was going next. That was almost 12 years ago. I never went back, never moved anywhere, ” he continues. Then, smiling, he adds: “It’s good that it worked out that way.”

Robertson started painting again. He joined a co-op gallery, “just to see if the work would sell.” That led him to monthly art markets in New Orleans. “I set up a tent and put out my art. I didn’t sell anything for months, ” he recalls. “Then, one day when I was about to pack up, this girl came up and bought three pieces. That kept me going back.”

The days of his paintings going largely unnoticed by passersby are now a fading memory. They’ve recently been exposed to millions of viewers via guest shots on walls in ABC TV’s “Nashville” and HGTV's “Interiors Inc., ” on an episode that showcased the interior of singer LeAnn Rimes’ Chicago condo. And they've appeared in national magazines like Architectural Digest and The Cottage Journal. Galleries in Atlanta, Nashville, Charlotte, Raleigh, Houston and San Francisco have placed his work in private and corporate collections. He has no idea why, but right now his strongest gallery sales are being generated in Saugatuck, Mich.

Asked if the work that is selling so well today is
significantly different from what he put out in New Orleans, without hesitation, he answers, “Yes!” He then pauses and adds that although the underlying technique hasn’t changed that much, the work has significantly evolved. “I have worked for years and paint every day. It started off as mud. It was not so good, but I didn’t stop. I kept going, and I continue to. And I still don’t think that I know what I'm doing. I am passionate about the way the paint works itself out, with the mistakes and the accidents. I’m trying to control the paint, and it just takes on a life of its own.” he explains. “Sometimes I don't know what is going to happen. The paint is in control, ” he continues. “It’s hard to explain, but when you do it every day, all day, you realize that that is the challenge.”

Robertson says that his New Orleans era paintings were darker, both tonally and in temperament. “I wasn’t as subtle then. The work was more harsh, ” he says. “It’s no longer as aggressive, not as mean.”

The Progression of Work

Robertson starts a new canvas with a general idea of what he wants to do. He maps out negative space and areas of strength. “Then I find the focal point, work out from where all of that begins and try to make it all work together, ” he explains. “I think about the last few paintings I’ve done, what colors were working and what I would like to experiment with this time. I add just a touch of this or that to see how that works with another color, with another palette, ” he continues, pointing out the color scheme of a small painting on the table. “Combining the right colors is a make-or-break on these. They have to work. And a lot of times they don’t, and I have to paint over and paint over and paint over.”

Areas with the strongest texture usually denote his starting point; areas with little or no texture usually were done late in the process. Pointing to the focal point of a piece that I'd examined closely at the start of our conversation, Robertson explains that “some of this texture is from seven or eight layers of redo, redo, rework, rework. The more it builds, the more it gives it character. Once a painting is finally finished, after a lot of mistakes, those usually are the best pieces, ” he continues. “But I never know when that’s
going to hit. There are so many stacks of pieces here that are unfinished. I tried it, and then I put it away because it just wasn’t working.”

And how does he approach a painting fresh out of storage? “I would try to hold on to the texture, the focal point where I started, and save a little bit of the detail of the original work. And it might be that that would be all that’s left. It could get out of hand, and it could become a completely different painting.”

When a painting finally approaches a stage where he’s pleased, “something just strikes me. It’s like, ‘That’s working. Don’t touch it. Leave it alone. Let’s see what happens when it dries and I add varnish to it, because that will also create its own little finishing touches. I use a varnish blend that browns it, ” he explains. “I can have the same paint with the same type of varnish, and it will set differently. Then, I get it out under the lights and look at it, ” he continues. Sometimes it is ready to go out the door at that point. Other times it’s sent back to await the next reworking cycle and possibly the next.

“I’m painting every day. To me, it’s going to be the rest of my life to get where I need to be. It’s just a progression. I don't know what style of work I'm going to be doing years from now. We'll just see, I guess. Hopefully my paintings will look a lot different, because that means that I am still working hard, and I still enjoy what I’m doing.

“I'm not here to be well known or famous. Initially, it was to sell a few paintings as a hobby. Now, I'm flattered that I can make a living doing what I like to do and that people appreciate my work. That just makes me work even harder.” 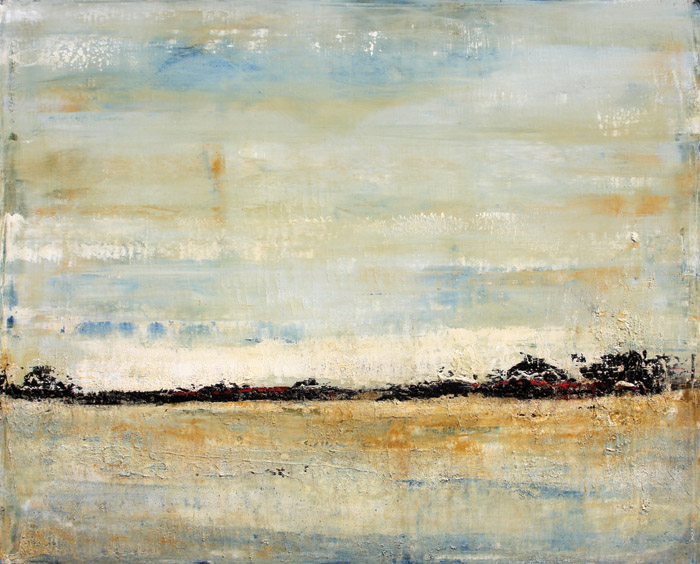 “Eight years ago, ten years ago, I never used white and now in my paintings I use so much white. I just keep getting lighter, ” says Robertson. “I try not to think too much, but I guess I try to create complications and flaws and things that just don’t make sense — to keep it from being simple. So a lot of this is very much intentional, which a lot of people wouldn’t understand that — or wouldn’t see or think about that.” To see more of Brad Robertson’s work, visit robertsongallerymobile.com.