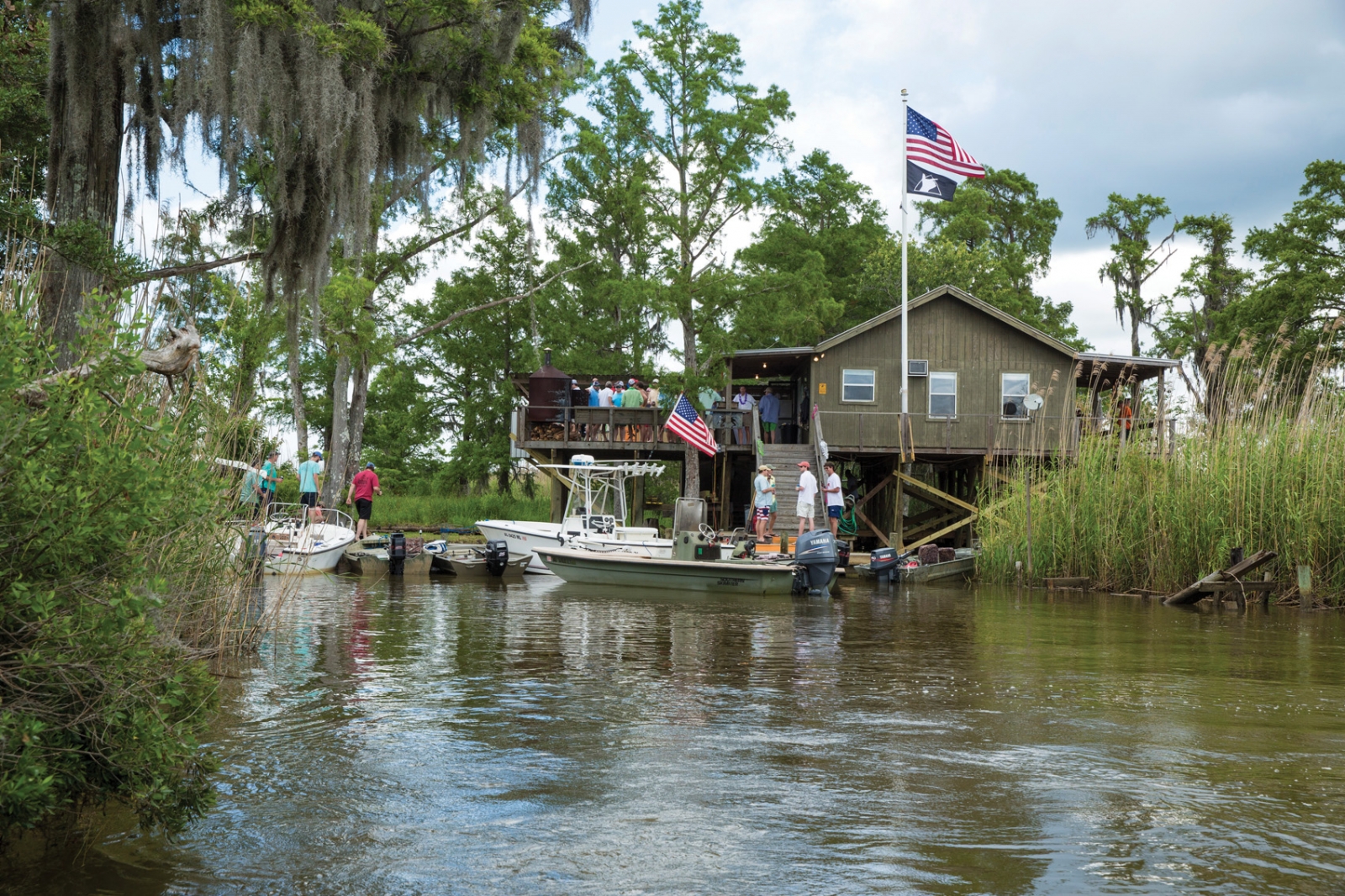 ABOVE The fishing camps that host the Poker Run are overrun with visitors on the Saturday before Mother’s Day. This particular camp flies the event’s logo, with a High Flying Chickasaw on a banner right under the American flag for all party-goers to see.

At some point, you may have noticed someone in passing wearing a ball cap displaying a hand over a triangle. The hand is closed except for the thumb and pointer finger, which are extended straight out. On one day a year, the Saturday just before Mother’s Day, you can also find several swamp camps, miles deep into the Mobile-Tensaw Delta, flying a flag with the same sign. This hand signal is called the “High Flying Chickasaw, ” and the triangle represents the “Delta.” It’s the logo for the annual High Flying Chickasaw Poker Run, perhaps the most unusual party you’ll ever attend.

Kendall Dexter started the Poker Run in 2010, and it’s been going strong ever since. The event results in the busiest day of the year for the most remote area of Alabama, luring 50 or more boats into the swamps of the Mobile-Tensaw Delta for a day of adventure and socializing with a crowd that is about as diverse as they come. Kendall is one of the owners of Runamuck, a swamp camp four miles north of the Causeway. The Poker Run is his way of showing off an area that’s been special to him since he was a boy.

“How did you come up with the logo?” I ask him.

“I came in from the camp one evening and hung out at Liz’s to have a drink with some guys. Somebody mentioned they’d seen Spud earlier that day and he’d ‘hit them with a Chickasaw.’”

I know about Liz’s Tavern on the Causeway. The establishment burned several years ago, but in its day it was the place where many swamp-campers launched their boats and set out into the Delta. When they returned in the evenings, they socialized in Liz’s smoky barroom next door. And I know Spud. He has a camp not far from my own on Chuckfee Bay.

“I didn’t want to ask what a Chickasaw was, ” Kendall continues. “The guy mentioned it like it was something we should all know … Fortunately, somebody else asked him. And the guy held up his fist with his thumb and pointer finger out and twitched it, and I knew I’d seen it a thousand times before. A kind of wave somebody gives you when you pass by in your boat.”

“I don’t know. I guess maybe because people from Chickasaw come out here … I don’t know. But it sort of sums up the friendliness of the place. And the height of the Chickasaw is always in direct proportion to a person’s level of enthusiasm for seeing you. You might fly a low one at somebody you don’t really know or recognize. A high flyer means you’re pretty excited to see the guy.”

Typically, there are about eight swamp camps involved in the Poker Run. They range from houseboats parked at the Causeway to camps like Kendall’s, deep into the marsh, accessible only by boat. The objective is to spend most of Saturday visiting all the camps and collecting one playing card at each location. Then, late in the afternoon, everyone meets at Runamuck to play their best hand and win prizes. 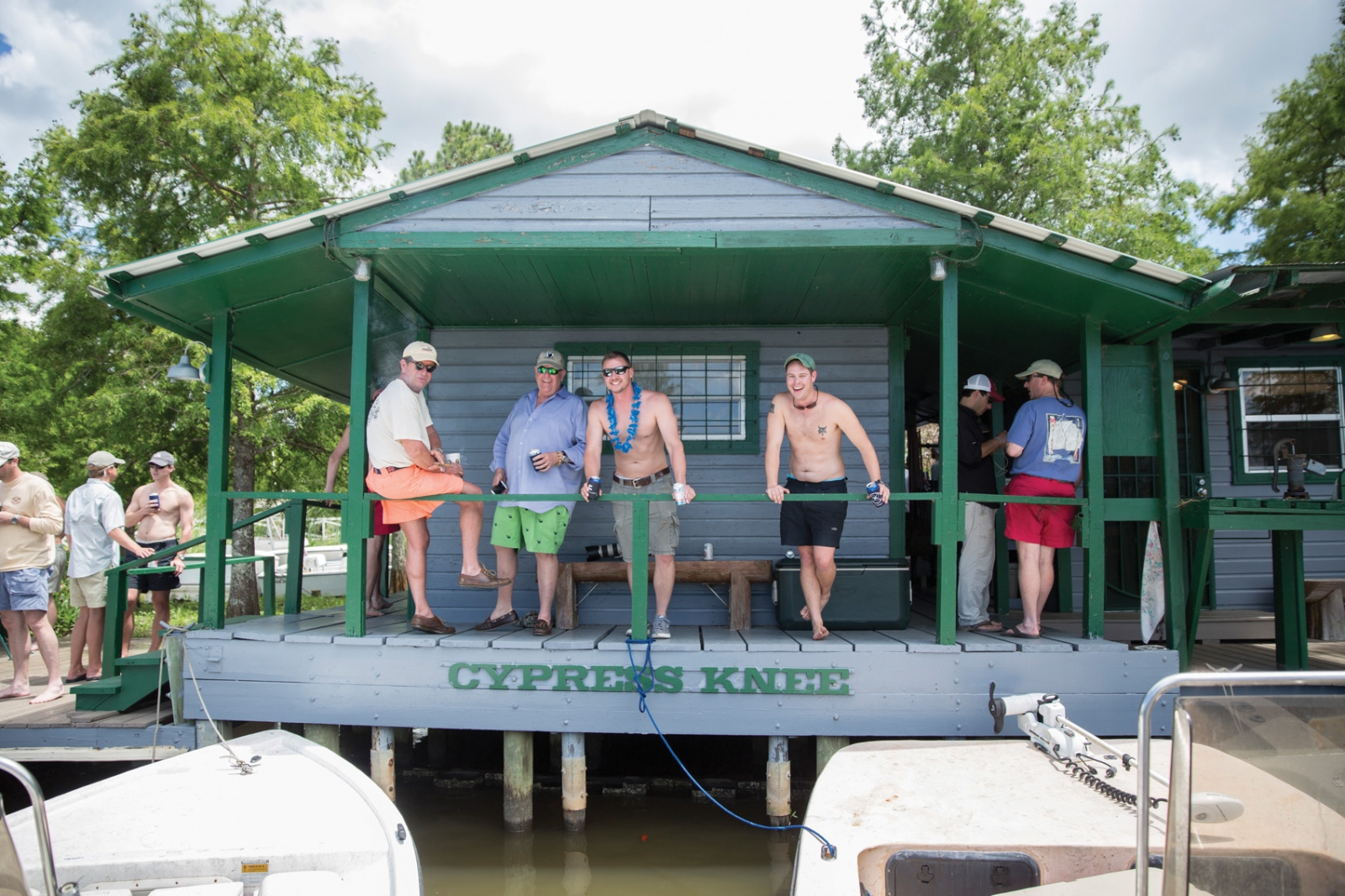 ABOVE Cypress Knee, one of the host camps for the Poker Run, has both covered and open spaces for guests to mingle.

The camps have their own forms of food and entertainment. Some have barbecue, some crawfish, some fried fish and frog legs. All have beer.

“Everybody’s proud of their camp, ” Kendall says. “It’s the one time a year they get to show it off.”

I’ve personally hosted guests at my own swamp camp since the party began. And I agree that all of us get a lot of satisfaction out of showing what we’ve done with the lumber we’ve hauled out there over the years. The best way I can describe the Chickasaw Poker Run is an open house for swamp camps.

“For some, it’s the first time they’ve ever been in the Delta. You get all kinds of people — kids and wives.”

The Poker Run is open to the public and costs $25 per person. This money is used to buy prizes and fund the pot. Along with the entry form is an attachment called “Bewares of the Delta.” Included in this list are warnings, such as:

That first year, like most of the camp owners, I spent weeks getting the camp in order. I cleaned the inside, fixed rotten deck boards and shored up the foundation. The Friday evening before the big day, everyone was as prepared as they were going to be and ready to relax. That night, the otherwise dark and cheeping swamp was alive with boat lights, spotlights and all manner of howling, carrying on and visiting between the camps.

The next morning, all was quiet. As I puttered about, making last-minute arrangements, I wasn’t the only person wondering if anyone was actually coming. Then, at about 10 o’clock, the boats started pouring in like D-Day. Many of them weren’t the types of boats or people you would normally see in these waters. Regulators and Jupiters and other high-end sportfishing boats eased tentatively across the shallows. Wives and kids were dressed more like they were going for an afternoon at Pirates Cove than deep into the jungle depths of the Delta. It seemed to me that these people didn’t know what they were getting into until they were in it and didn’t know how to turn back.

I wondered if it was really going to work. 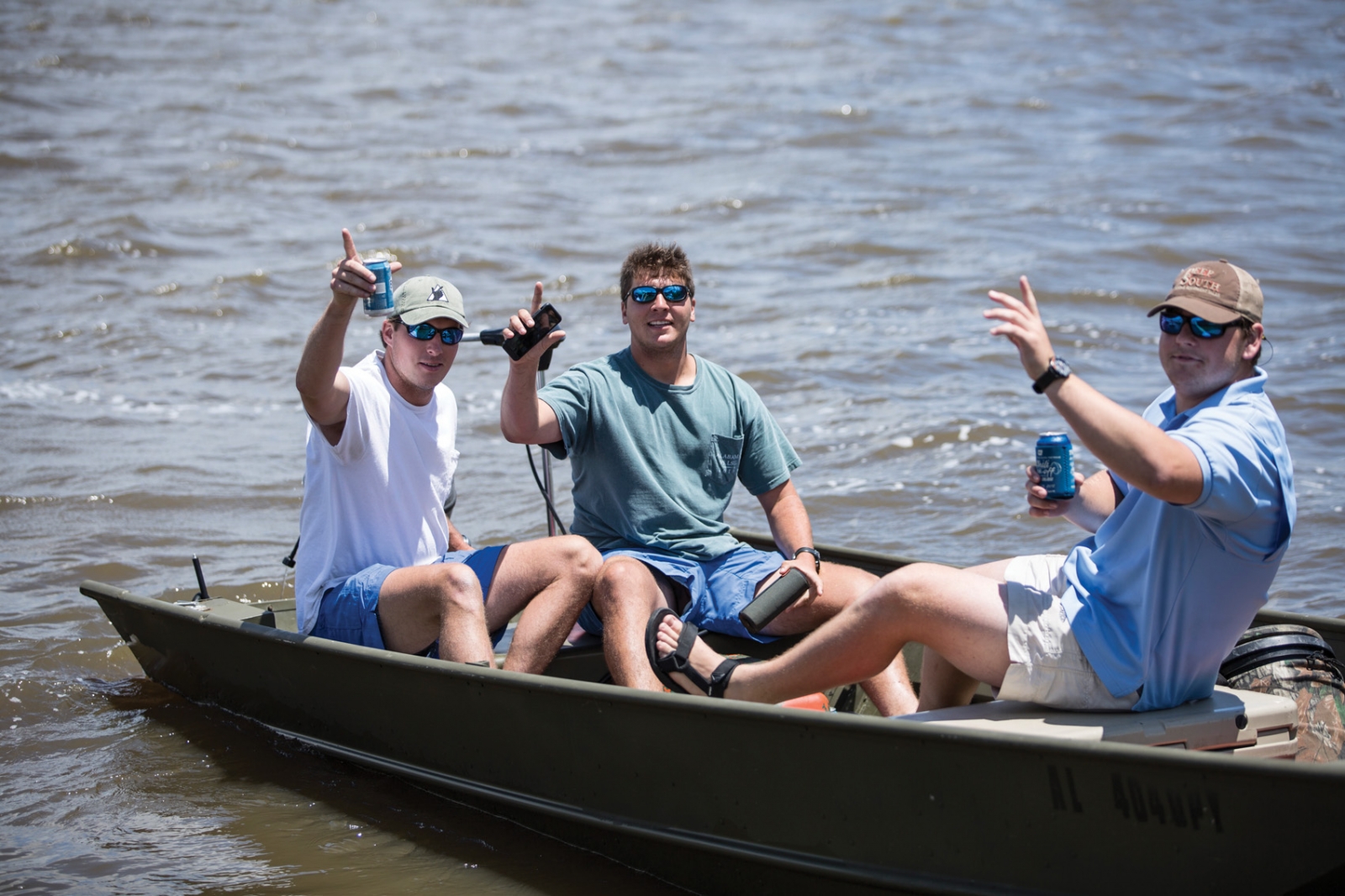 ABOVE These boaters embody the laid back appeal of the Poker Run, with a casual salute to passing watercraft.

The Poker Run is as popular now as it ever was. Just this past year I attended the seventh annual. This was the first time I decided to be a participant instead of a host, leaving my swamp camp in the hands of one of my friends. I found one man leaning against the wall of Camp Smith, sipping a beer and looking like he couldn’t be more content. He told me he was from Bayou La Batre and had come up with a friend.

“I heard about this from somebody, ” he told me. “We’ve never been up here, so we decided to buy a ticket.”

“You having a good time?”

“Hell yeah. Everybody’s been real nice. We’re gonna do it every year now.”

“You going to play your hand later?”

“Yeah, man. If we can get enough cards. Every time we stop at a camp we end up hanging around for too long.” 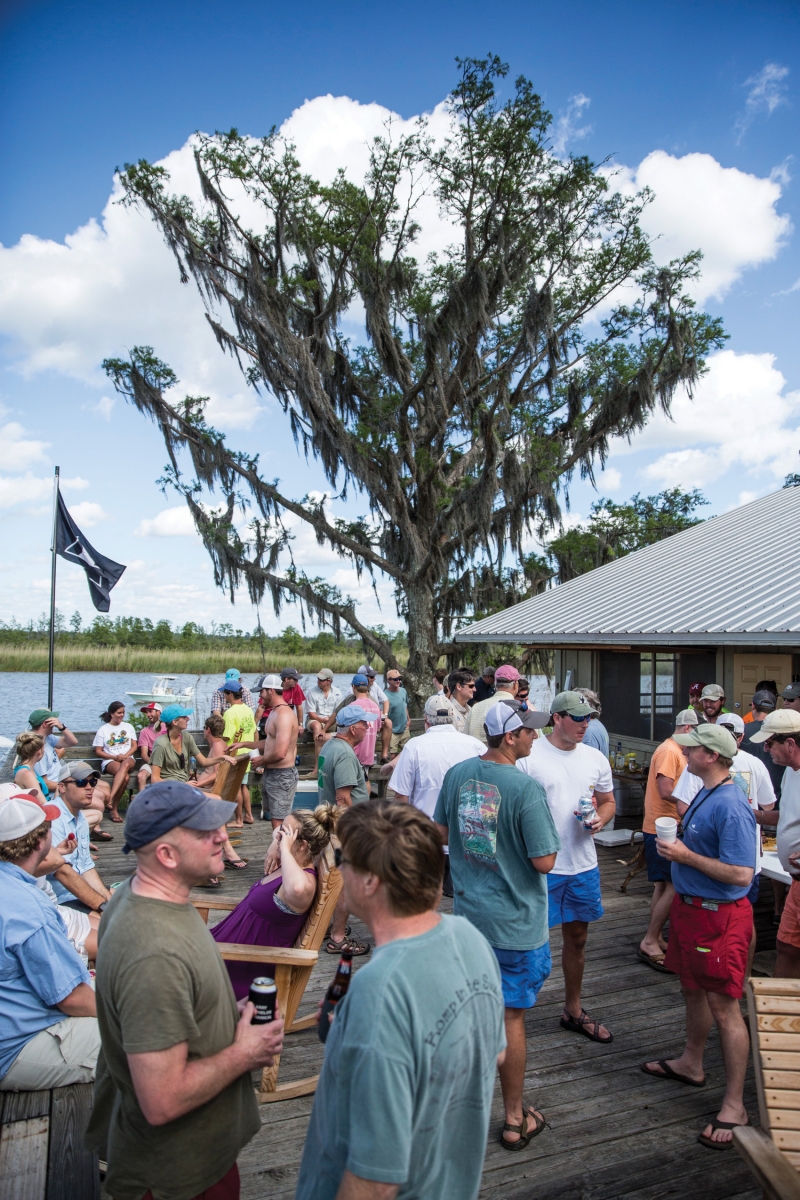 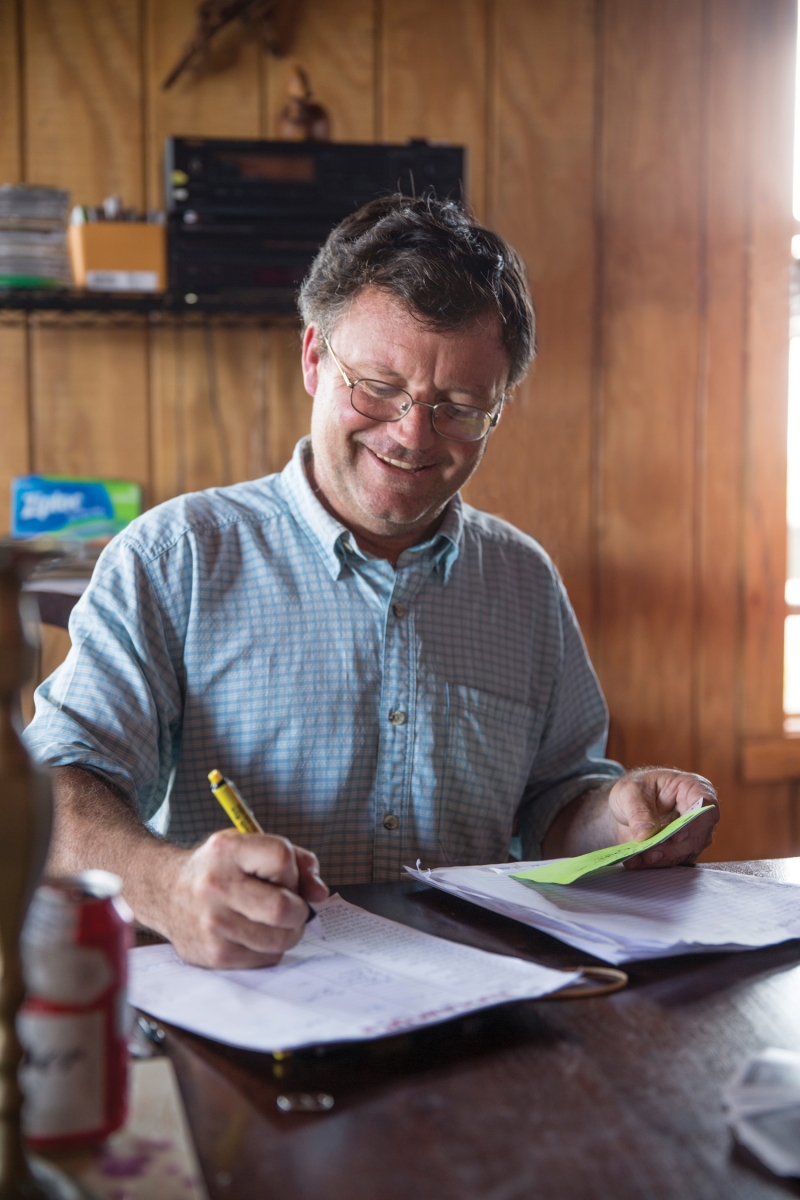 ABOVE LEFT You never know who you’ll meet at a stop on the high flying Chickasaw poker run.

ABOVE RIGHT Meticulous bookkeeping is the key to ensuring that the game stays fair, stop after stop. 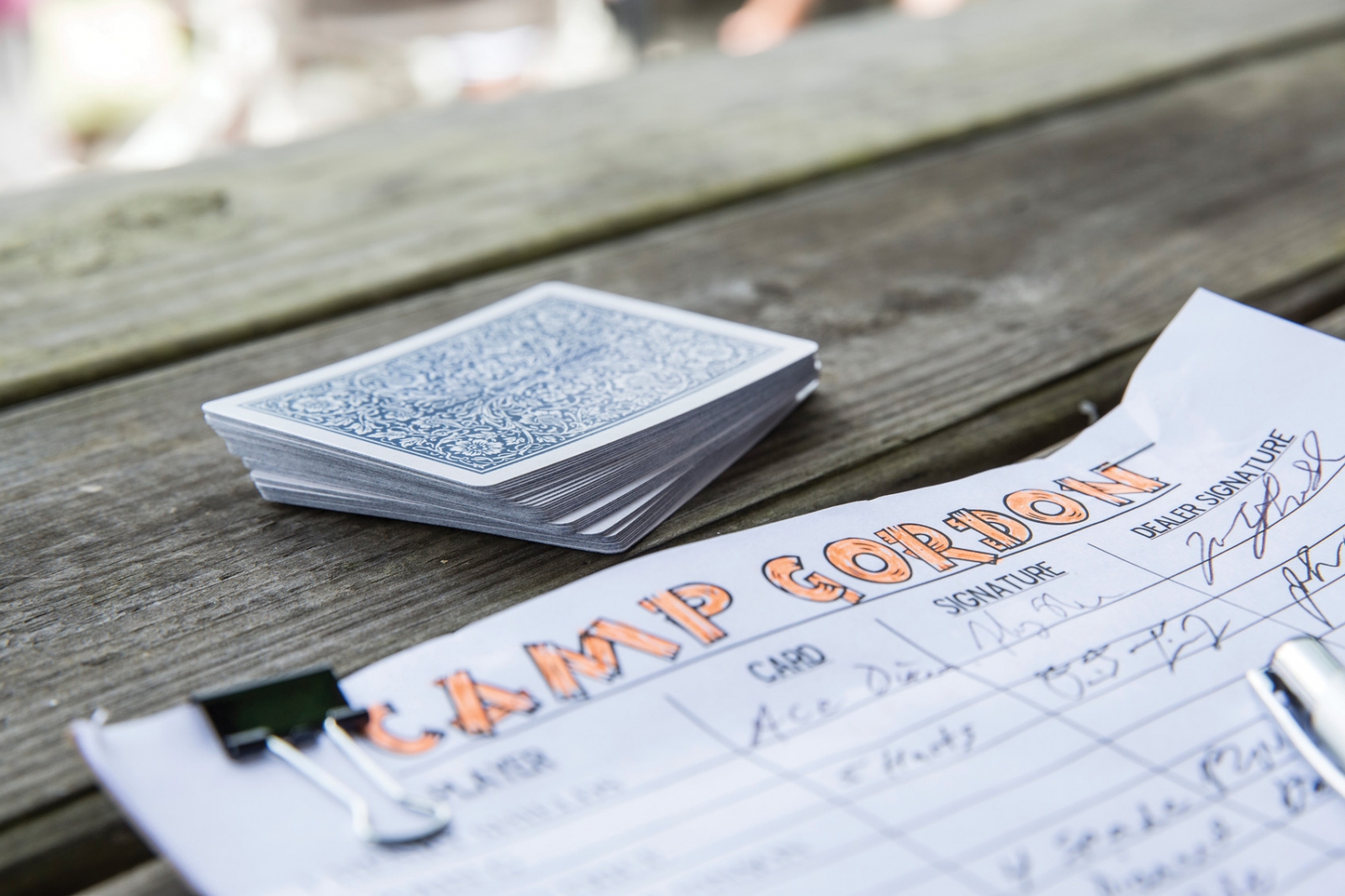 Most people end up making a mad dash late in the afternoon to round up the last of their cards. Then the entire mass of boats ends up rafted together before Runamuck. Music is playing and people are sunburned and everybody’s in a good mood. Even after an entire day of partying, it seems things are just getting started. Then, as the sun drops lower over the cypress trees, it’s time to play your hand.

“You ever have problems with cheating?” I ask Kendall.

“No, we’re pretty careful to track who gets what cards at each camp. Closest I ever had to a problem was last year when we were drawing for some door prizes and the big prize was $1, 000. My wife and daughter were there, so I didn’t want to pull the card out of the hat myself. If they won, I didn’t want anybody to think I had anything to do with it. So I asked this girl to come up and do the pull for me. She ends up getting her own name.”

“Yeah, ” Kendall nods. “It wasn’t a problem. Everybody could tell she was pretty surprised.”

Even though I’m sort of looking for something devilish to write about, I know there really isn’t anything but good fun to be found at the Poker Run. Kendall and all the swamp camp hosts are hospitable to friends and strangers alike. And as the sun sets, High Flying Chickasaws are exchanged all the way back to the Causeway. 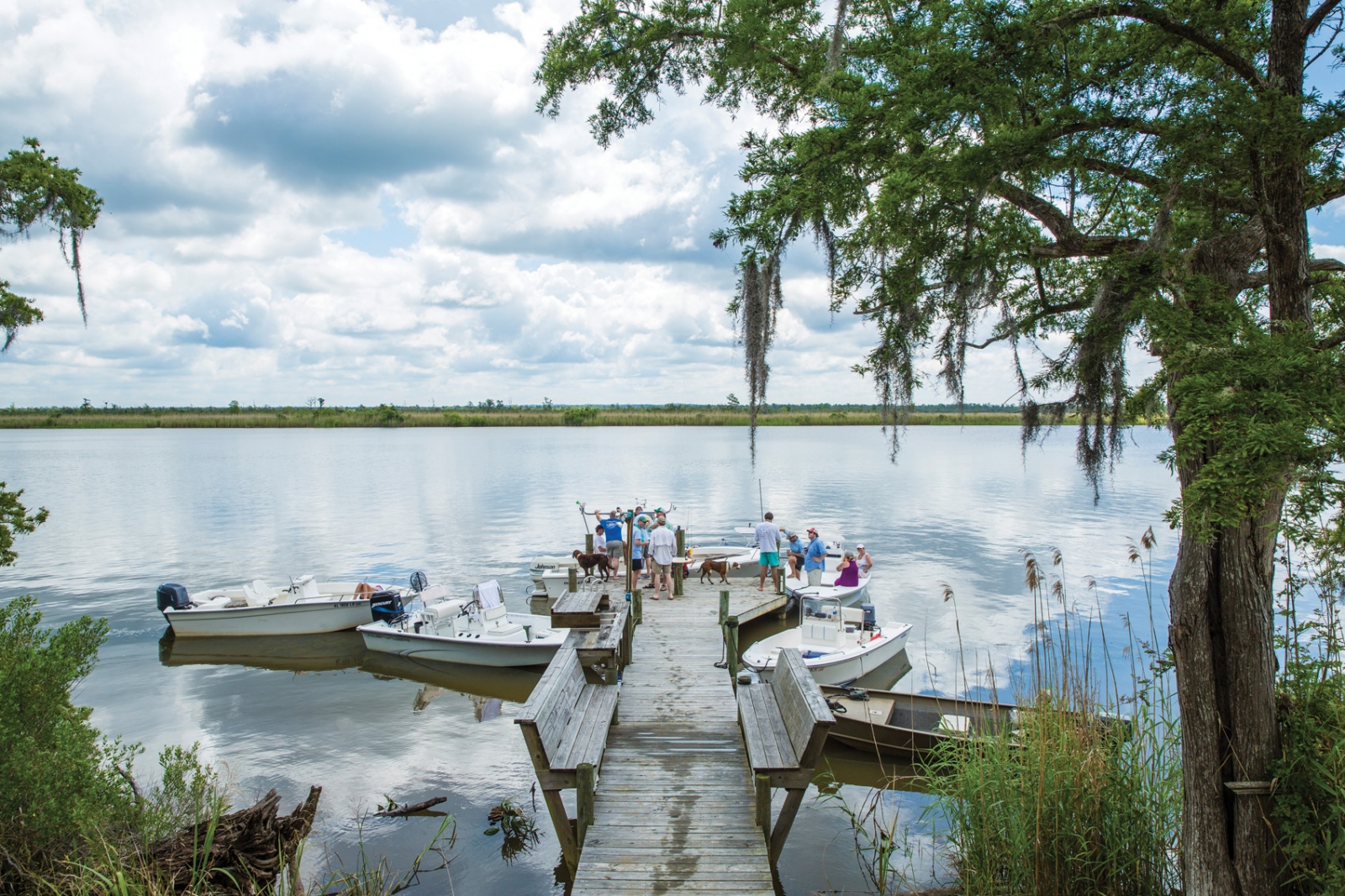 ABOVE Leaving is always the least exciting part of a stop on the Poker Run.