If you get a chance, ask all those Michigan birds why they’re loitering in your yard and on your beaches this December.

You might look down your nose at them, as if they were the naive out-of-towners they are, but I suspect they might teach us all a thing or two about how to finally enjoy a Gulf Coast winter.

You take, for example, those birds called robins that settle into Gulf Coast yards this month. Your cousins in Detroit take their arrival in March to be a sign of spring. But what their coming really means is that the harshest days of winter are just ahead.

In this delightfully upside down world we live in, our mild winter is the destination for robins fleeing the inhospitable bitter cold that spreads across much of the country.

Maybe they come because they feel warmer here. But I’m not so sure. I’ve lived through a few of those Northern winters – winters when it was 25 degrees or more below zero. I thought I could never be as cold again, until I moved back to Mobile and was reminded that a cold, damp evening on the Gulf Coast soaks into your bones. Some days, I think I’ll have to fly back north to get warm again.

I’m pretty sure it’s not just the temperature those robins are escaping by moving South. What they’re really trying to dodge is what those temperatures do to the landscape they live in and on. It’s a long, hungry winter in Detroit, where the earth and waters became a solid block of ice. You’d need a jackhammer to extract a worm and a blowtorch to free a drop to drink.

Winter is so long and persistent in that part of the world, gardeners just board up the yard and dream of traveling south with all the birds. No Northern gardener would try to plant in winter. You’d need an ice ax to make a hole. And even if you managed to wedge a plant into the ground in December, it would (like the robins) perish from trying in vain to suck moisture and nutrients from the frozen ground.

Regardless of how cold it might feel when the sun goes down on the Gulf Coast, winters here pose none of those problems. A day of frost means 10 days sparkling bright will follow. It’s cold enough to slow mosquitoes, but never cold long enough to halt the life that’s pulsing through your soils.

Those robins are noodling in your yard because earthworms have no trouble weaving through our soft, warm, winter ground. If, on a rare night, it’s cold enough to freeze the birdbath, robins will be slapping and splashing in it before you’ve finished your second cup of coffee.

It’s really too bad we don’t appreciate winter on the Gulf Coast as much as those snowbirds do.

Because the ground never freezes, and because moisture is abundant, many plants grow through winter here as if it were just an extended spring. Quite a few, like camellias, pansies, fatsias and delphiniums, don’t even bother to bloom until they feel the pleasant chill of Gulf Coast winter coming on.

In other parts of the country, they talk about a “growing season” for gardens and crops that stretches from the last frost in spring to the first frost in fall. That would be 180 days or less (and often much less) in more northern latitudes. Mobile is supposed to enjoy a mere 300 or so days of growing weather, from the last frost in February to the first one in December. But you’ve missed the point of gardening here if you don’t recognize that our growing season runs from Jan. 1 to Dec. 31.

We’ve tried for years to make a bleak Detroit of our Gulf Coast winters, assuming only a few pansies and rigid ranks of ornamental kale could possibly survive the cold. We wait, resigned to our own private Siberia, for spring to bring color back into our lives again.

But those of us who pay attention to the robins find, every year, something new that makes a home in our local winters: fresh lettuce all season long, snapdragons, parsley, calendulas, broccoli, broccoli rabe, delphiniums, cardoon and artichokes, and (lo and behold) that finicky cilantro that grows well and productively only when it’s subjected to cold. Last year, my dill revealed its fondness for winter. This year, I’m seeing just how far I can push poinsettias, nasturtiums,  purple cauliflower and my favorite Caribbean peppers.

I’m always amused when people ask me whether I’m going to can my summer garden bounty to help me make it through the winter. My winter garden is just as productive as my summer one, and there’s not a day of winter I’d want to trade fresh greens and broccoli for a boiled jar of leftover summer.

Like the robins, I’ve learned to splash through this Gulf Coast winter as if it were just another spring. 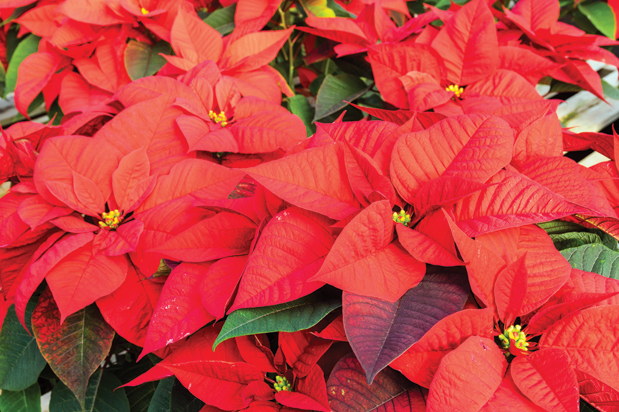 Bloom of the Month
Everybody’s got one in a pot. But wouldn’t it be neat if we all had them, supersized, in our gardens? Hold on to those poinsettias until March, plant them in a protected place, and let them grow into specimen shrubs or trees for the biggest poinsettia splash of all next December.

Signs of the Season
When first frosts fall early this month, winter rains begin and the air is sweet with tea olive bloom. Plant growth slows almost to a stop with shorter days, but flowers linger for weeks, caught in December’s suspended animation.

Planting
The 12 days of Christmas are important for planting spring bloomers and fruiters. It’s the perfect time for sowing sugar snaps in the garden and tomatoes in pots on the windowsill.

Ripe for picking
Don’t fear the frosts. Those first few of December sweeten lettuce, collards, kale and many other winter vegetables: Sugar is their antifreeze! Gulf Coast Hamlin oranges get sweeter by the day, but don’t wait too long to pick. The hard freezes that descend at Christmas can ruin the fruit.

Weeding
Tired of fighting pesky spring rattlesnake weed and chickweed? You can easily put a stop to them now. Spring weeds thrive on winter sun. Mow them now or yank them out of the bed before they soak up enough winter sun to explode in spring.