Go everywhere! See as much art as you can!” I heard this call to action in a small Parisian courtyard in the summer of 2012 while participating in a painting intensive through Columbia University. Gregory Amenoff, the school’s visual arts chair, told us we weren’t going to do much painting that summer. We were to attend lectures, read art theory and — even more importantly — see all the art we could. An obvious lesson lay under all that frantic observation: to learn about art, you have to look at art. Lots of it.

Following that lesson, my mission to see as much art as possible led me to the dramatic and intelligent work of Mobile native and St. Paul’s grad Kathryn Andrews. While perhaps not a household name in her hometown, Andrews’ pieces are collected and shown around the world. She has had recent solo shows at the Museum of Contemporary Art, Chicago; David Kordansky Gallery, Los Angeles; and on The High Line, New York City.

Andrews’ dramatic installations incorporate highly finished manufactured pieces and found objects. They’re often associated with Pop Art, a movement made familiar by Andy Warhol in the 1950s. Andrews borrows visual images from the entertainment industry and advertising to comment on popular culture and consumerism. Her 2016 exhibit “Run for President” featured oversized photo murals of celebrities posing with political figures, brightly colored campaign posters promoting Bozo the Clown for president and, in the midst of it all, a human-sized mirrored cylinder that, when viewed on one side, reflected the viewer into a large backdrop of the Oval Office. The show forced viewers to consider the ways in which celebrity blends with politics and, through the repetition of reflective surfaces, highlighted the role all of us play in this crazy system.

Q. What was the most formative experience in your schooling?
In 2000, I moved to Los Angeles to study at Art Center College of Design, Pasadena. At that time, few American graduate art programs offered cross-disciplinary study, and I had become interested in several mediums. Art Center prided itself on having a glut of artists, curators and writers passing through as visiting faculty and everyone met with everyone. Painters would teach students interested in becoming video artists. Poets would meet with sculptors, and so on. It was more about thinking and less about craft. I met one-on-one with many remarkable people, including the influential sculptor Mike Kelley.

Q. When and how did you discover you wanted to pursue art beyond typical childhood crafts?
I wasn’t very artistic as a child. In high school, I was failing a physics class, and I was able to switch out of it to take an arts elective in photography. I wanted to become a politician, but everything changed when I was exposed to the darkroom.

Q. Mobile and the South in general are home to more traditional visual arts. At what point did you become aware of what was happening in the wider art world?
My family moved a lot, so after high school I continued that pattern, living in many places, finally settling in New York. There I began to regularly see photography and contemporary art exhibitions in museums and galleries.

Q. A stumbling block for general consumption of contemporary art is the idea that the art world is an insulated insider club. Does it enter into your calculations that those experiencing your work (particularly when you show in public venues) may not recognize the hallmarks of modernism or “get” the work?
Art education is not valued in the U.S. as it is in many countries, and so the idea that art is hard to “get” is rather pervasive here. In my experience, most untrained viewers have highly intelligent ways of looking at and making great sense out of things when left to their own devices. Further, most Americans have a shared heritage through consumer culture, the Internet and Hollywood. These cultures impact art and vice versa. So no, I do not worry about that sort of stuff too much. I also frequently work with objects and images that are fairly commonplace.

Q. I love the sense of humor and vibrant use of color in your work. You use props and images in a witty, kind of sly way, but present them in simplified forms with a touch of minimalism and modernism. How much do you think about the presentation and look of your work?
I think a lot about presentation. I am interested in creating environments that are spectacular upon first glance and that invite an immediate perceptual experience. But I also try to make works that reveal more the longer you look at them. I’m a fan of beauty, but I’m also a fan of rupture. 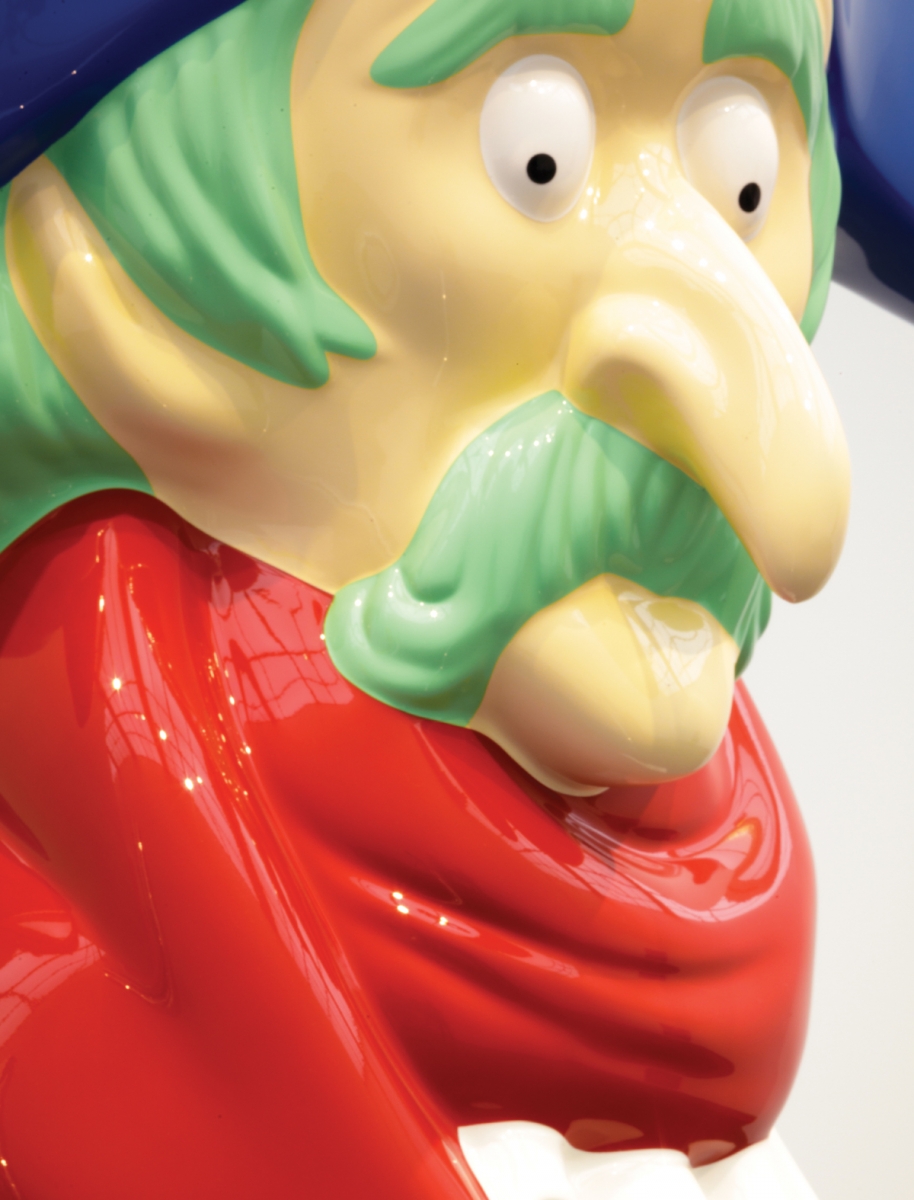 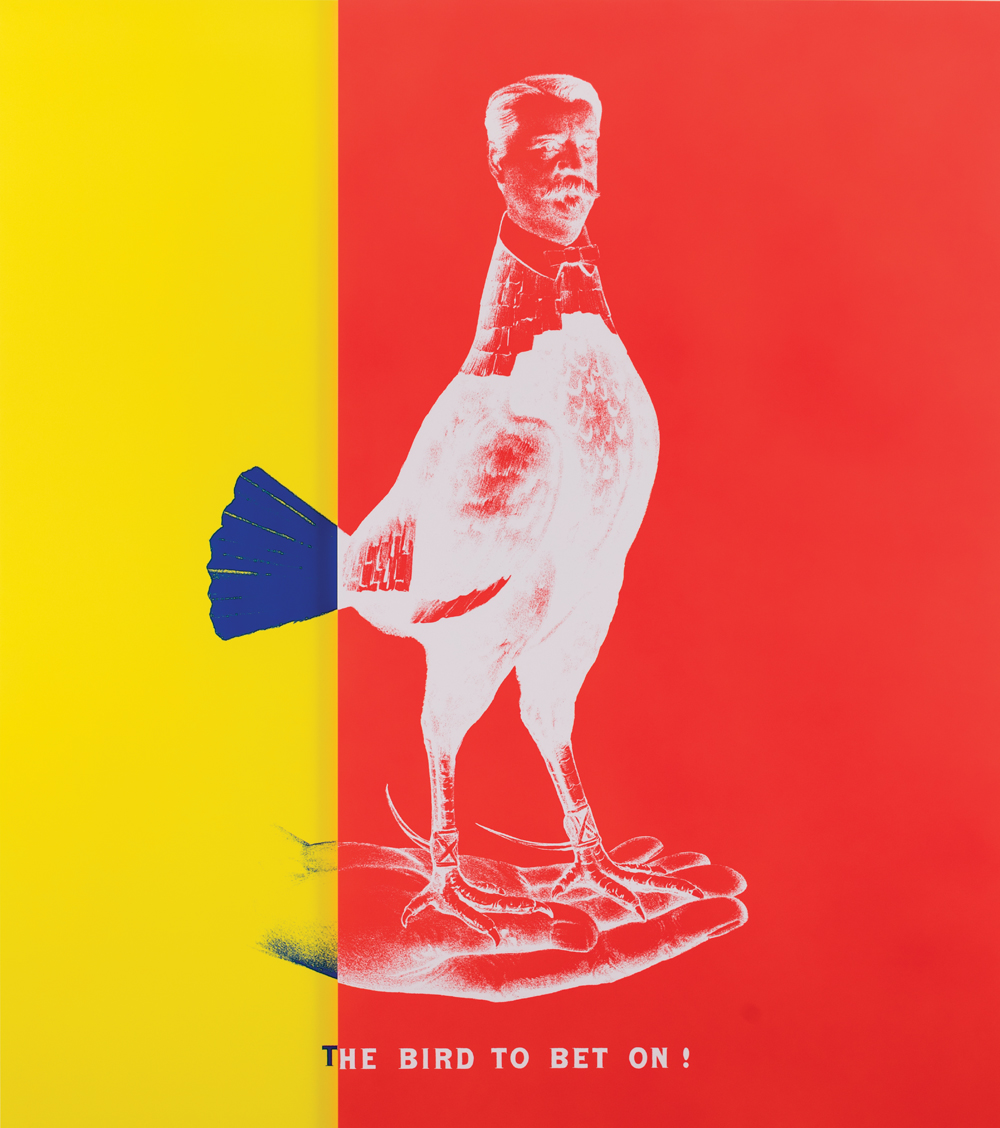 ABOVE RIGHT WEE MAN FOR PRESIDENT aka Historical Campaign Poster Painting No.3 (The Bird to Bet On), ” 2015, aluminum, ink, paint, plexiglas,

Q. Your art has been described as being influenced by Pop Art, conceptualism and Finish Fetish movement. Do you embrace or resist categorizing your work as part of those movements?
I don’t think my work neatly fits in any of those boxes, but it certainly draws from the aesthetics and logics of each. I am more interested in how we experience images differently than how we experience materiality. If Pop Art traded in imagery and minimalism in simpler abstract forms with a certain physical presence, I am interested in what happens when those histories collide. How does the brain navigate seeing image and then stuff back to back?

Q. Some of your exhibitions could be interpreted as providing critiques of consumer and celebrity/political culture. Do you see yourself as an activist or political artist?
Sometimes my work is overtly political; sometimes not. I do see being an artist as a political act, particularly in the U.S. where the arts are not widely supported. I see the work of all artists who are not normative as political. For example, the work of women is still largely undervalued in the market compared to the work of men. My work is always understood in relation to my being a woman, so I don’t see how it can be considered apolitical until that becomes normalized. 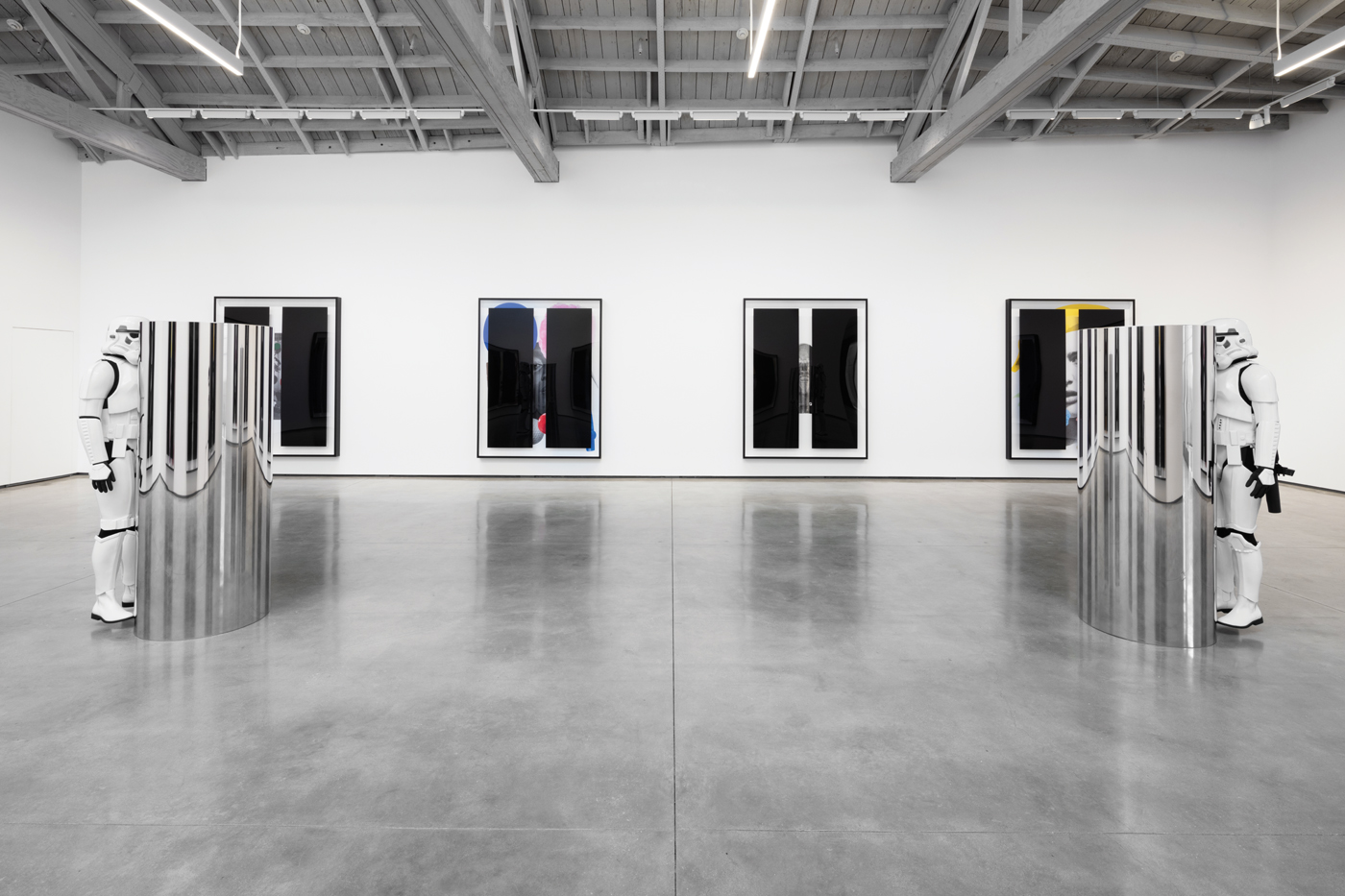 Q. Sometimes it seems as though you are actually thumbing your nose at the idea of “High Art.” For a piece at the Institute of Contemporary Art, you hired street performers to wheel a chain link fence in front of the other artists’ works and pose there for several hours, leaving the fence behind when they left. How did the other artists react to that unexpected addition?
That show was about artists who make work in relation to other artists’ works, so everyone was pretty open to the idea.

Q. Any words of wisdom for artists trying to build a career in the art world?
See as much art in person as you can!