One hundred and fifty years ago this month, a fiery contest took place between Union and Confederate forces at the mouth of Mobile Bay. At stake for the Confederacy was the preservation of its last seaport on the Gulf of Mexico. At stake for the Union was Lincoln’s re-elect and the hope for a shorter war. It all hung on whether a wooden fleet with a few monitors in support could defeat a well-armed masonry fort and a fearsome iron monster named Tennessee. The results were bloody and decisive, not to mention worthy of sober reflection and appropriate commemoration in this far distant age.

Early on the morning of Aug. 5, 1864, Adm. David Glasgow Farragut steamed into local waters. His powerful warships were all in a line, with weaker vessels lashed to their port sides where they were protected from Fort Morgan’s big guns, and their engines could help power the warships. The USS Brooklyn led the van, with Farragut’s flagship Hartford second and the turreted ironclads Tecumseh, Manhattan, Winnebago and Chickasaw just ahead and to starboard, closer to the fort. Opposing this awesome fleet were Fort Morgan (Fort Gaines was too far away to play a role), the torpedoes (or what today would be called mines), obstructions and the Rebel ships Tennessee, Gaines, Selma and Morgan, drawn up across the approach, just inside the Bay. Aboard the Tennessee, a Rebel lieutenant described the scene: “It was a grand sight to see when [the vessels] were all in line, the monitors leading slightly and the wooden vessels lashed together, two and two.” The mesmerized Confederate sailors “had ample time to witness the pageant, for such it was for half an hour, before it became a bloody, fiery reality of war. The water was smooth as a millpond, and the tide was flood, which fact argued a determination on the part of the enemy to come in anyway, for in case of being disabled their vessels would float in.” That was vintage Farragut.

Watching the drama unfold from the Union side, an assistant surgeon aboard the Lackawanna witnessed the first shot from Fort Morgan, “looking exactly as if some gigantic hand had thrown in play a ball toward you.” Then all hell broke loose as tongues of flame and great billows of smoke enveloped fort and fleet. In order to better see the action and direct events, Farragut climbed into the rigging where he was famously secured by a small rope tied by the signal-quartermaster. Farragut later called the Battle of Mobile Bay the “most desperate I ever fought, ” but his grit and seamanship left little doubt as to the outcome. 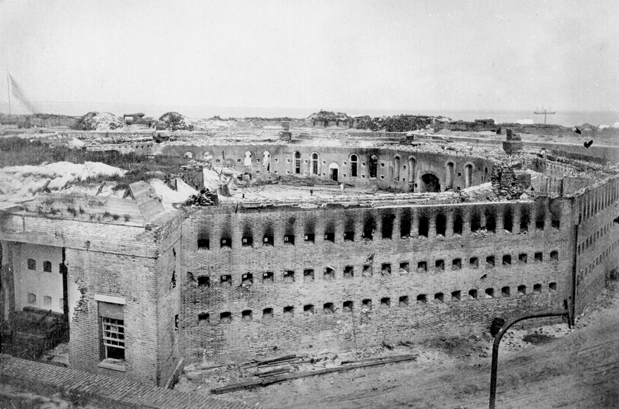 An Aug. 23, 1864 view of the havoc of the citadel at Fort Morgan following the battle that took place only two and half weeks earlier.

When the Tennessee made its move, the Tecumseh veered to engage, and promptly hit a torpedo that lifted her stern high into the air and sank her in moments, with 94 aboard. Horrified, the captain of the Brooklyn started backing his ship’s screws, and the Union fleet bunched up in front of Fort Morgan’s batteries. As Rebel shot wrought fearful havoc and carnage on the Union decks, Farragut rebuked the Brooklyn’s commander and issued his immortal command, “Damn the torpedoes, full speed ahead!” Fortunately for the federals, no other torpedoes worked that day, though they could hear them bumping and thudding against their hulls as they steamed into the Bay. Wet powder and the barnacles, oysters and teredo worms clustered on the striker mechanisms were to blame. 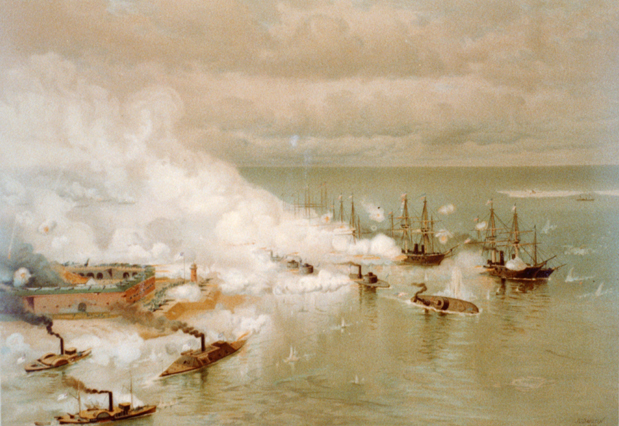 The USS Tecumseh strikes a torpedo and sinks within view of Fort Morgan. As the battle ensued, thunderous sounds of war reverberated to civilians in the city, creating a range of reactions. Some boasted pride and confidence in their men, while others were overcome with trepidation.

Meanwhile, in Mobile, citizens could just discern the distant rumble of cannon fire. Breakfasting in their Government Street house, Frances Mosby and Lou Mendenhall heard a frantic ringing of bells that became a “pandemonium of sound.” The young women sprang from the table, hastily donned bonnets and headed for the riverfront. All along the route were excited residents, and “we girls locked arms and joined the crowd on the sidewalk. The confusion was indescribable, but we soon learned the cause. At sunrise that morning Adm. Farragut had formed his line of battle to attack the forts.” Some panicked and began immediate plans to evacuate, but cooler heads felt confident that even if the forts and Adm. Franklin Buchanan’s little squadron failed, the upper Bay batteries and obstructions would protect them. Mobilians like Mosby and Mendenhall coped by such little self-reassurances.

In a little over two hours after getting underway, Farragut’s fleet had successfully run past the forts and anchored well inside the Bay. But Buchanan left his foes little time to lick their wounds, and shortly after 9 a.m. steamed straight for them. The Union vessels hastily up-anchored, and the battle joined. The Tennessee may have appeared invulnerable, but she had two significant design flaws — exposed steering chains and a tall smokestack. Both were almost instantly shot away, depriving the vessel of control and engine draft. Sitting amid the towering warships and the lower-profile monitors, the Tennessee belched destruction in every direction, her sailors sweating and coughing at their smoky guns inside her casemate. The Union ships fired at the behemoth again and again, with no more apparent effect, wrote one contemporary, than “a musket wad or popgun pellet might be expected to produce on a buffalo’s skull.” While the wooden warships ineffectually rammed the Tennessee, watched their shot ricochet off her iron sides and collided with each other, the Chickasaw clung to her quarter and hammered away with an 11-inch shot.

The nearby Manhattan got in fewer shots, but they too were fearful. The same young Confederate lieutenant who had admired the peaceful nautical ballet that preceded the battle described one of the thundering reports from the Manhattan. It produced a “blast of dense, sulfurous smoke” that enveloped the Tennessee’s portholes as “440 pounds of iron, impelled by 60 pounds of powder, admitted daylight through our side where, before it struck us, there had been two feet of solid wood, covered with five inches of solid iron.” Incredibly, there were no casualties from this shot, but under the constant pounding the Tennessee’s casemates weakened, splinters flew across her decks, and Buchanan was badly wounded.

At 10 a.m., disabled, blasted and smoking, the Tennessee surrendered. As for the rest of Buchanan’s little flotilla, the Selma was captured, and the Morgan and the Gaines fled close to Fort Morgan, the latter vessel badly damaged and sinking. The Battle of Mobile Bay was over. Twelve Rebel sailors were killed, 20 wounded and 280 captured. Farragut counted more than 300 casualties, nearly a third of those aboard the Tecumseh and most of the rest aboard the Hartford and the Brooklyn. It was then, and still remains by far, the fiercest and most sanguinary combat ever waged on Mobile waters. It also marked a turning point in naval warfare. Clearly, wood and sail were done. The future belonged to iron and steam.

◗ Farragut entered the U.S. Navy at age 9 and served in the War of 1812 two years later. He was given the rank of prize master, the officer in charge of captured ships, at age 12.
◗ On Dec. 31, 1864, President Abraham Lincoln created the rank of vice admiral specifically for Farragut.
◗ As a Union officer in the Civil War, Farragut helped capture the Confederate city of New Orleans.
◗ The final ship that Farragut forced to surrender during the Battle of Mobile Bay was called the Tennessee, which is ironic, since he was born there.
◗ On July 25, 1866, Farragut was commissioned admiral. He was the first officer of the Navy to hold that rank.
◗ Farragut served in the Navy for 59 years.
◗ Five ships of the U.S. Navy have been named after him.

◗ In 1845, Buchanan submitted a plan for organizing a national naval school at Annapolis, Md., which was founded that same year.
◗ Buchanan was the Naval Academy’s first superintendent. Right before the Civil War, Buchanan resigned, thinking that his home state Maryland would secede from the Union. When it didn’t, he tried to recall his resignation but was dismissed. He joined the Confederate Navy the very next month.
◗ Buchanan became the Confederate Navy’s first admiral.
◗ He was wounded by a gunshot to the thigh in the Battle of Hampton Roads in 1862.
◗ During the Battle of Mobile Bay, Buchanan was wounded and taken prisoner until February 1865.
◗ Buchanan served in the Navy for 50 years.
◗ Three U.S. Navy ships have been named in his honor.

Aug. 1 – 3: Commemoration of the Sesquicentennial of the Battle of Mobile Bay and the Siege of Fort Morgan

A spectacular series of Civil War reenactments are planned. Activities include Bobby Horton performing Civil War music Friday at 7 p.m.; a naval battle on Saturday at 10 a.m.; numerous artillery-firing demonstrations throughout the weekend with the pièce de résistance being a nighttime Grand Bombardment over the fort’s ramparts Saturday from 8 p.m. to 9 p.m.; blue and gray infantry clashes; and a concluding surrender ceremony and salute to the colors Sunday at 1 p.m. Special exhibits of rarely seen artifacts from the fighting will be concurrent with these events.

Professional re-enactors from across the nation will be coming in to commemorate the Sesquicentennial of the Battle of Mobile Bay and Siege of Fort Gaines. Activities throughout the weekend include blacksmithing, military drills, cannon firing and live music by the Kracker Dan Band.

John S. Sledge is the author of “The Mobile River, ” to be published in 2015 by the University of South Carolina Press.