Alva Smith Vanderbilt Belmont was known internationally during her long lifetime. Her first husband, William K. Vanderbilt, was one of the wealthiest men in the world, and with his money, she built incredible mansions on Long Island, midtown Manhattan and Newport.

She was the seventh of nine children born in Mobile to Phoebe Smith and her husband, Murray, a cotton broker. In 1851, the couple built a castle-like mansion on the southwest corner of Government and Conception streets and were members of the neighboring Christ Church where young Alva was christened in 1854.

As her daughter, Consuelo, would later reminisce, Alva “was a born dictator … who rejoiced in conquests and loved a fight.” When a boy made fun of Alva’s Sunday hat, she patiently waited until she could push him into a muddy gutter. When another laughed at her climbing a tree, she chased him down and tackled him.
An adult had to pull her from his back.

The family appears on the 1860 federal census as living in Mobile, but by the following year had moved to New York, much to the delight of Alva’s contemporaries. After attending boarding school outside of Paris, Alva returned to Manhattan where she met and married Vanderbilt in 1875.

While William was tall and athletic, Alva was never thought of as a beauty.  Those who knew her described her as resembling “a cute Pekingese, ” petite in stature but with the heart of a pit bull. William, like so many others, was attracted by her quick wit and charm.

Alva would brag, “I blaze trails for others to walk in. I was the first in my set to marry a Vanderbilt.” She would later add to that boast, “and the first to divorce one.”

Alva heard rumors that Willie had taken a Parisian mistress. When Alva discovered that the woman had dressed her French servants in livery matching those worn by Alva’s staff, she filed for divorce.

It was then that she turned her attention to 19-year-old Consuelo’s love life. Alva dashed her daughter’s romance with a New Yorker, having turned her own sights on the Duke of Marlborough. The man was short and ill-tempered, but owned Blenheim, the only non-royally owned palace in England. It has been estimated that Blenheim received $15 million from the Vanderbilts, while the duke got a $2.5 million trust fund from his new father-in-law.

Once Consuelo was settled in England, Alva married O. H. P. Belmont, a wealthy friend of her ex-husband, in 1896. She later advised, “First marry for money. Then marry for love.” By all accounts, her second marriage was happy but short, ending with Belmont’s sudden death in 1908.

As a widow, Alva turned her efforts from society to suffrage, working tirelessly to obtain women in America the right to vote. She marched and rallied and was famously quoted as advising her coworkers, “Pray to God. She will help you!” It wasn’t too long after women got the vote that Alva moved to France where she died in 1933 at the age of 80. She rests within a mausoleum patterned after a Gothic French chapel in New York’s Woodlawn Cemetery. 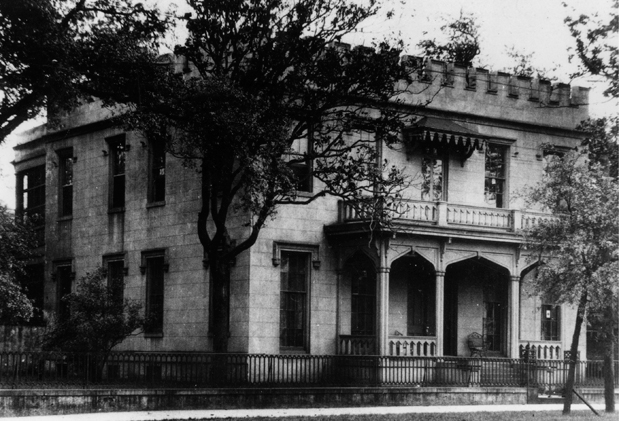 Her parents, Phoebe and Murray Smith, built a mansion at 201 Government St.

Within a year of her death, wreckers came for her birthplace at 201 Government St. Its last owners had walked away from it in 1927, unable to afford maintenance. Alva’s obituary in the Mobile newspaper described her former home as standing “in ruin and unoccupied solitude, like a sentinel of a glorious past.” It was replaced by a parking lot for a bus station, and today the entire block is home to the city-county complex.

In 1962, a member of the Historic Mobile Preservation Society wrote to Consuelo asking for some memento of her mother’s to be housed at Oakleigh. The former duchess graciously responded that she would be happy to bequest a portrait of her mother, adding that she had grown up hearing about Alva’s childhood in Mobile.

The portrait of Alva arrived at Oakleigh in 1965, along with a surprise. Packed in an adjoining crate was a portrait of her first husband, which Consuelo’s granddaughter added to the shipment. Although W. K. Vanderbilt never lived in Mobile, his portrait, along with that of his first wife, has decorated the walls of Oakleigh for nearly 50 years.