“Remove not the ancient landmark, ” the Bible tells us. But we Americans have always been an impatient, push-ahead people, continually building, tearing down and rebuilding our towns and cities to keep pace with technology and aesthetic fashion. Preservation is a fairly recent concern in our history, dating back only a few decades in most states. But even when a landmark seems secure in people’s affections, it can be tragically lost through carelessness or natural disaster. What we have left on the national landscape is but a fraction of what once was.

The Port City, alas, bears a laundry list of no-longer-extant distinguished buildings. One need only to look at the old photographs to feel a tug at the heart. Some of our most magnificent local landmarks fell to fire and storm, but by far the majority were willful demolitions to make way for something else — a highway, a high-rise building. Rarely has what replaced these gems come close to rivaling their grace and sophistication. Thankfully, we at least have the pictures. Here then, as a reminder of what we once had, are 10 of my personal favorites.

When people say “Keep Mobile Funky, ” these buildings are what spring to my mind. By the time this photograph was taken in the 1930s, these four-story houses on Monroe Street no longer represented first-class addresses. But their cast iron verandas, easy sidewalk access and commodious windows and doors bespeak an era when Downtown was a crowded and lively neighborhood. 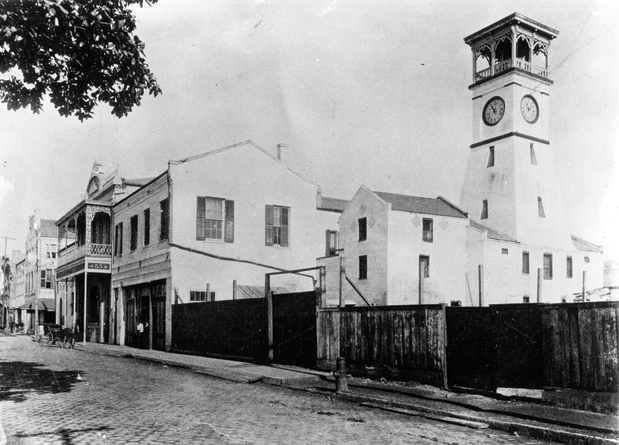 Sometimes erroneously called the Old Spanish Guard House, this antebellum holdover once stood on St. Emanuel Street downtown and charmed late 19th-century Mobilians with its clock tower and stucco walls. When it was torn down, a newspaper reporter actually shed a tear for it, waxing nostalgic for the “old walls” behind which so many prisoners had once pined in “durance vile.” This is, to my knowledge, the earliest local public expression of any wistfulness for a historic building. 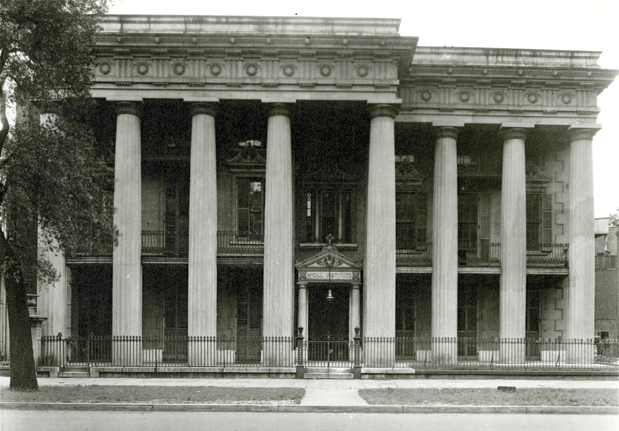 This monumental Greek Revival residence once stood on the north side of Government Street just west of Joachim. Its soaring Doric columns, full entablature and elegant cast iron fence gave it a commanding presence. It was originally built as a residence for Daniel Chandler and was converted into a school for “Catholic young men” some four decades later. Two of the old column sections were left in front of the parking lot that now occupies the block. 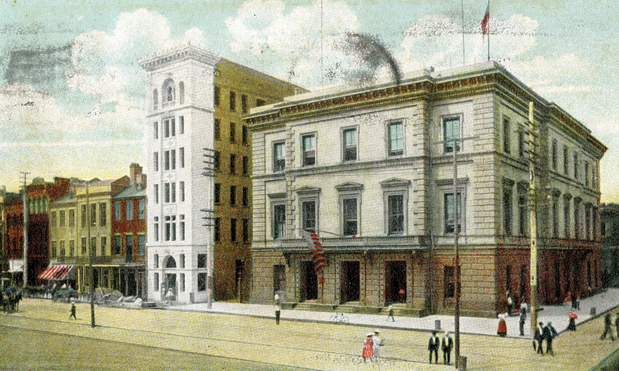 Architect Ammi Young designed this Italianate and classical revival masterpiece. Located downtown (where the RSA-BankTrust Building is now), it was built like a fort — granite blocks laid with inter-locking joints all set on a foundation of solid clay and 12-inch-thick heart pine. Not surprisingly, it cost a whopping $360, 000. The building was notable for its disciplined form and pleasing eave brackets. Its demolition nearly bankrupted the company hired for the job. 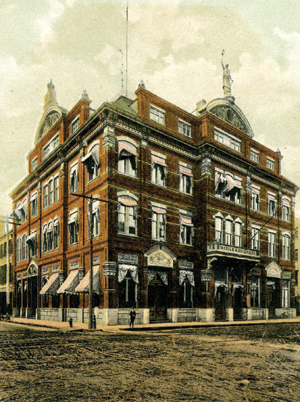 This structure stood at the northwest corner of Commerce and St. Francis streets and was designed by Rudolph Benz, Mobile’s premier Victorian architect. Erected to help regulate the robust local cotton trade, it featured precise brickwork set in red mortar, retractable canvas awnings, a mansard slate roof and a triumphant Goddess of Industry on one of the parapeted dormers. 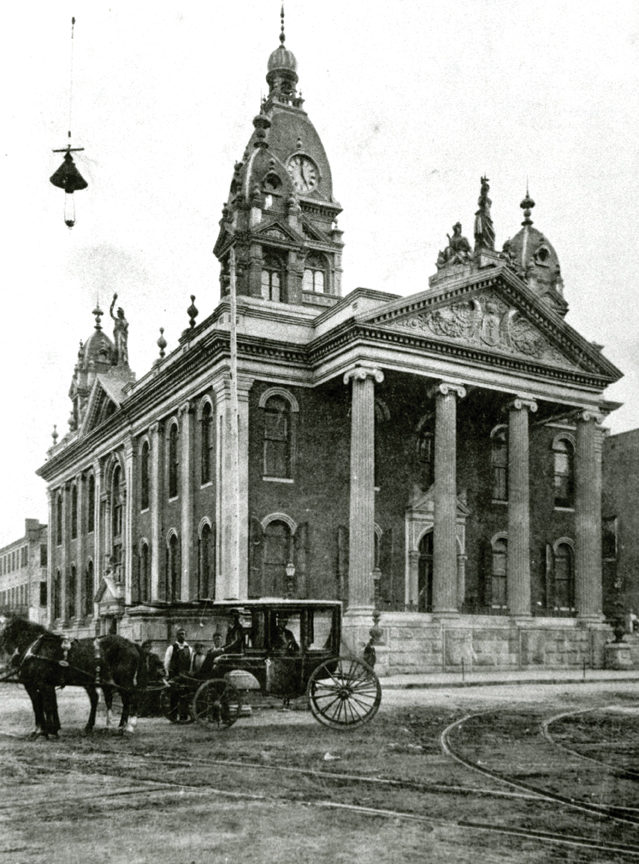 Benz erected this neoclassical/Victorian marvel on the burned ruins of a predecessor. The building featured columned porticoes at street level, yet the roof broke with all precedent. Here, Benz unleashed his creative powers to the fullest, capping the building with 94-foot towers at three corners and a massive 186-foot central clock tower that the press exulted “pierces the ethereal.” The Goddess Marianne, which stood atop the pediment over Royal Street, now ornaments the History Museum of Mobile’s atrium. 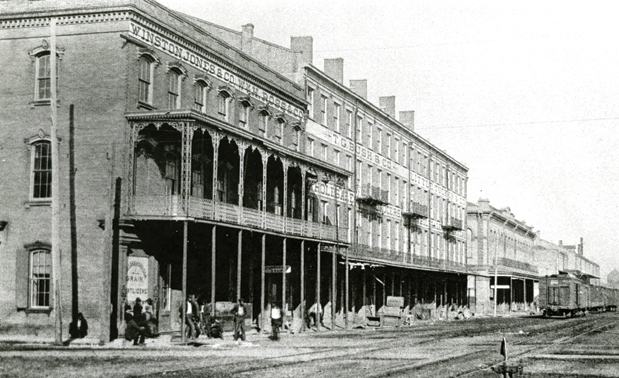 Front Street developed along the river east of Water Street during the 1830s and served as Mobile’s maritime front door for a century. Throughout the 19th century, it was lined with brick commercial buildings and warehouses, many of the former sporting balconies such as those in this picture, left. The railroad tracks were laid around 1870, giving the merchants and ship captains the convenience of trackside service. All of these fine buildings were swept away by the Urban Renewal project of the 1960s. 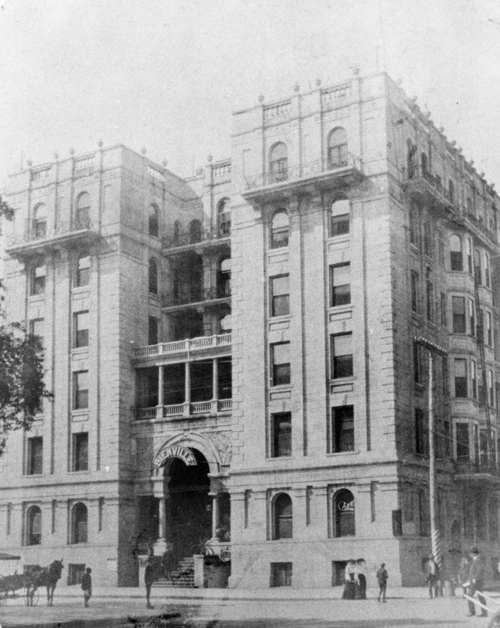 Designed by Atlanta architect G.L. Noramon, this six-story hotel stood on the north side of Bienville Square and featured two large rectangular blocks linked by a lobby and court. This had the happy effect of giving each room exterior light and air. The grand, arched front entrance and bay windows on the east and west elevations were particularly handsome but not enough so to protect it from destruction. For some reason, perhaps because it was a down-market alternative, the Bienville Hotel is not as oft-recalled as the Cawthon Hotel, which came down at roughly the same time. 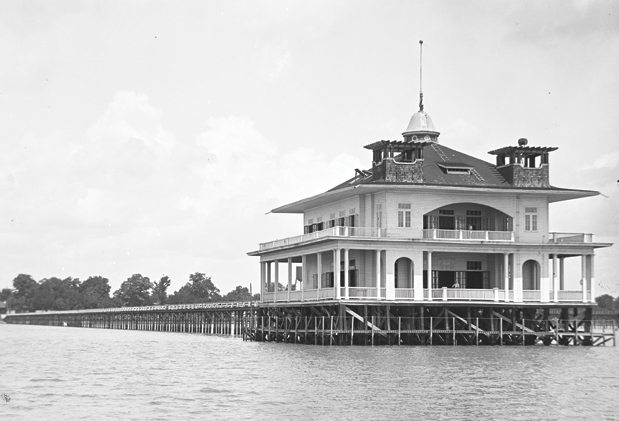 Built at Monroe Park, this stunning structure perched at the end of a 600-foot wharf where members could take in races and enjoy refreshing Bay breezes. Its wraparound verandas and multiple windows and doors afforded easy exterior access, and the corner towers provided first-class views. After the 1916 storm, only the pilings were left. 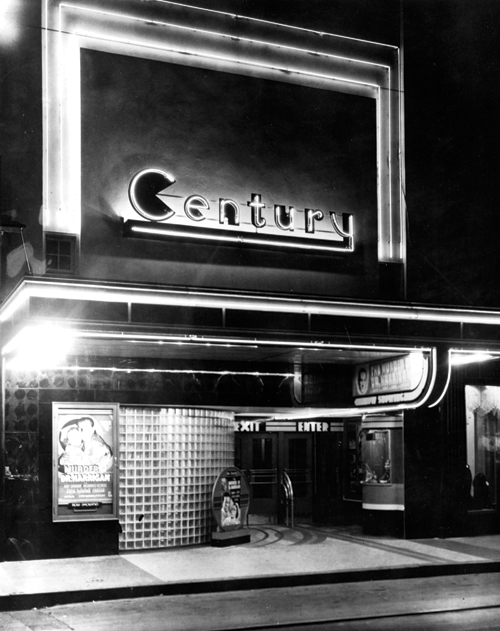 In an old Southern seaport like Mobile, it’s easy to ignore the more recent buildings that we have lost. But some of them were quite interesting. Among the best was the stunning Art Moderne theater at 208 Dauphin St. After the 2004 fire, the structure, originally designed by Cooper Van Antwerp, was heavily remodeled and now houses the Crescent Theater.

John S. Sledge is the author of “The Mobile River, ” published by the University of South Carolina Press in 2015.