It’s almost Christmas.
You’ve worked hard to be able to buy a few gifts for your children. Your wife’s Christmas decorations have been up since September (Filipinos have the longest Christmas season in the world). Your children have likely made their Christmas lanterns already. Your family always attends Mass at dawn on Christmas Day, and your wife buys bibingka (a holiday rice cake) on the way out of church for everyone to enjoy for breakfast. You long to celebrate these traditions with your family while you’re at sea, but you’ve missed all of it this year. You still have three more months until you can see them again.

You’ll spend Christmas at a port in America — Mobile, Alabama. The fog of depression starts to set in as you perform the same tasks you’ve done every single day, without a break, for the past six months.

A few hours after you arrive at the port, a group of men arrives, including a Filipino priest. You and your shipmates are among the 40 percent of all seafarers who come from the Philippines, where 86 percent of the population is Catholic, so talking to this priest instantly reminds you of home. The group gives you a bag of necessities like toothpaste, lotion, and shampoo. They have a Wi-Fi hotspot so you can video chat with your family. They’ve even offered to take you to a store, and they’ll come back later to celebrate Mass. It feels like God sent these people—the Catholic Maritime Ministry of Mobile—to you at exactly the right moment. 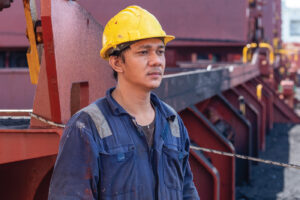 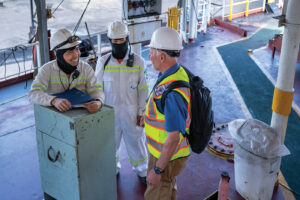 Seafarers visit with the Catholic Maritime Ministry of Mobile.

Stella Maris
The local chapter of the international Catholic port ministry, Stella Maris, formerly known as The Apostleship of the Sea, provides year-round hospitality and pastoral care to seafarers, nearly 30,000 of whom pass through Mobile annually. At Christmastime, the work of the local chapter is especially important, says John Archer, a deacon who serves with the ministry.

“Last year, we started including Christmas cards made by local kids in the gift bags, and we had a captain start crying when he looked at his,” Archer says. “He said, ‘It feels like these are from my own kids.’”

One of the biggest needs for the men (and a few women) who work on these ships is connection — with the outside world and especially with their families.

“In their limited downtime, they can send emails, and that’s about it,” Archer says. “It’s a tough life. So, as we board these ships, we’re providing physical contact outside those same 20 people they’ve been with for months, and we bring Wi-Fi hotspots so they can see their families.”

Lito Capeding, priest and director of The Catholic Maritime Ministry of Mobile, is Filipino, which allows him to connect quickly and easily with many of the people working on the ships he visits, sometimes contributing pastoral care for those who need someone to listen.

“I have a special connection with the Filipinos I meet, but we serve everyone, regardless of nationality or religion. We encounter people from Russia, Ukraine, India, China, Sri Lanka and Ethiopia,” he says. “No matter where we are from, we all love to share our life, faith, culture and music with others. The world is so tough. We can be a source of sanity by bringing joy to one another. We can embrace each other and affirm one another’s humanity.”

Serving “The Least of These”
The Stella Maris model all over the world centers on this concept of affirming the humanity of seafarers, who often feel forgotten and lonely as they spend up to nine months at a time working on a ship. Capeding says no two interactions are alike, and the group doesn’t focus solely on evangelism or measurable results.

“I’ve been a chaplain for 14 years, and I’ve seen and experienced so many sad and joyful occasions with these men and women,” he says. “Seafarers suffer a lot from emotional and physical dislocation. We are mandated to ask what they need from the Gospel perspective found in Matthew 25 — we are called to take care of them. For us, they are the strangers in our midst, the ‘least of these,’ that Jesus speaks of in that passage.”

“The world is so tough. We can be a source of sanity by bringing joy to one another.”

The ministry continues to grow, and seeks volunteers from a wide range of backgrounds and life experiences. Affirming seafarers’ humanity is the goal, but Archer describes that the benefit is mutual.

“I came into this as a deacon, and we are randomly assigned to different ministries,” he says. “I had no background in this at all — I’m a retired accountant. I told Father I’d work four hours a week, but now I spend over 30 hours a week doing this, and I don’t get paid. It just really speaks to you. It’s life-changing. One captain said it best: ‘We meet as strangers and leave as friends.’”