The Country Club of Mobile was begun in 1898 and a clubhouse and golf course were built on the water adjacent to the Bay Shell Road in the area just north of where the Brookley complex is today. The facility was badly damaged in the hurricane of 1906 and plans were made to relocate the club farther south to a site with more acreage near what was most recently Nan Seas restaurant. However, subsequent issues with the terminus of the city streetcar line changed everything. Soon the current Spring Hill location was chosen, purchased and clubhouse/golf course construction was underway. This was about 1916.

The initial “clubhouse” was a small, temporary multipurpose structure. The golf course layout started by what is now the club’s tennis shop and went north toward the “Pasture” across what is today Wimbledon Drive.

A magnificent three-story clubhouse was complete by 1918 and sometime between 1918 and 1920, Donald Ross “designed” a golf course whose location and routing is the same as today’s course. There is little doubt that Ross designed the course, but there exists little evidence that he ever set foot on the property.  Ross designed/routed courses from supplied topographical maps. Designers such as Jack Nicklaus use the same process today.

Back then there was a firm known as Stiles & Van Kleek, developers of country club communities around Boston and St. Petersburg. This outfit’s business plan was based on “following Donald Ross around” and plotting large residential areas around Ross courses. Apparently they would come in, partner with a few locals, and buy, design and develop as much raw land as possible. This is exactly what they did in Mobile. One of their local partners was J. Gilbert Burton, the father of Bruddy Burton, a great golfer and longtime club member known to many. There is a large schematic of the real estate development hanging on the wall of today’s club. The schematic is interesting to say the least.

As a side note, Byrnes Boulevard would come much later – it’s named after Joe Byrnes who owned Big Standard, a used car operation. He was a longtime club member. Winnie Way and Suzanne Circle were developed in the late forties and fifties by Red Wilkerson. Winnie and Suzanne were his daughters.

On a very cold winter night in 1925, the clubhouse caught fire and burned to the ground. The golf pro James Campbell and his wife, as well as the club manager and one other, died in the fire. All had been occupants of the third story living quarters and simply could not escape.

My father, who was a freshman student at Spring Hill College, had attended a dance that night at the club. He always referred to the function as an “API dance” so I assume it was a holiday event with college kids. API, or Alabama Polytechnic Institute, is what Auburn University was called at the time. My father told me that after the party was over, he and his buddies went down to Napoleonville (that’s Crichton today) to get something to eat. As they were returning to Spring Hill, they got as far as the Young’s place on Old Shell Road when they noticed light in the sky from the fire.

What was left of the clubhouse was razed by mule teams, hauled down the hill and buried without ceremony. In 2000, when the golf course was renovated last, while rebuilding 8 green, burned timbers were discovered under the left hand greenside sand trap. To my knowledge they still remain there.

After the fire a new clubhouse was quickly built – a one story “fireproof” structure. This clubhouse lasted until 1957 when the entire club was extensively remodeled, the exterior becoming old brick. The driving forces behind this project were J.N. Ogden and Ed Meyercord. The money was raised by the sale of bonds – the same X and Y bonds members have today.

Currently as I write this, the Country Club of Mobile is in the process of a complete redesign of the north nine and the practice area. I have a feeling it will be terrific. We have a good club – good clubhouse, good golf course. I’m glad I’m still here to enjoy them. 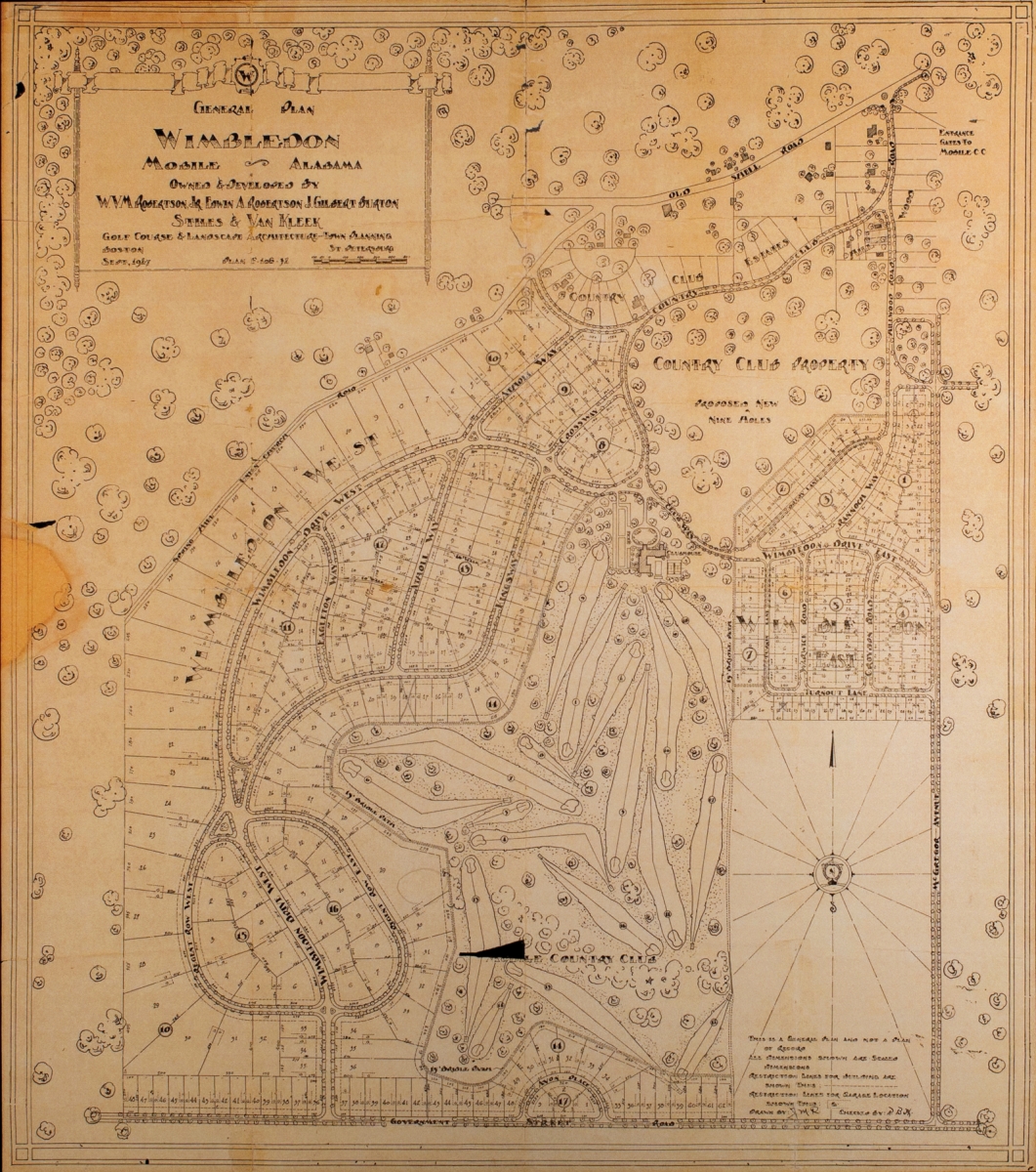 ABOVE The original schematic for Wimbledon, drafted by developer Stiles and Van Kleek in September 1927. The inscription reads Golf Course and Landscape Architecture, Town Planning. Although the lots remain mostly the same today as drawn here, the roads have changed somewhat. Bit and Spur Road today was known as Spring Hill Union Church Road back then, and Airport Boulevard was known as Government Street Road. Dauphin Street would not be extended this far for another roughly 40 years!

What prompted you to put these stories down on paper? By education, I’m a journalist. No journalist worth his salt dies without writing a book!

Who is the target reader? Actually the book was written for a very narrow target — people who knew me or some of the people I wrote about. Subsequently, I’ve come to find out that many others outside of the target have enjoyed the book — people who simply love golf, folks that like local history or those who can project their own experiences into some of the stories.

As an ad man, you are used to telling your clients’ stories. Was it an easy transition into telling your own? Yes, the transition was easy. Ad copy —print, broadcast, social — needs to be conversational in tone. Much like the book.

Describe your golf game in a few words. Not very good anymore. But the same camaraderie  that drove me to write the book still exists. That’s why I still play.

How do your friends sum you up in a few words? That depends on which friends you ask!

Any more books up your sleeve? Well, I’ve had several people suggest topics that I might write about. Anything in the future would have to be similar. Written in the first person, include actual experiences. But yes, I will write another book.

How can MB readers get their own copy of your book? Simply email me at rsullivan@redsquareagency.com. No charge, I will gladly mail them a copy.