John Besh. His is a name synonymous with the best in Southern cuisine. And with 12 restaurants, multiple nationally televised cooking shows, a handful of deluxe cookbooks and a foundation specializing in passing on Southern culinary traditions, it’s no wonder.

“I once took Southern food for granted, ” the New Orleanian shares. “It’s what we always had. I wanted to travel around Europe. I wanted to work in New York. I wanted to see the world, and yet as I did that, I missed what we had in the South. That lured me back. So, I take the finesse that I’ve learned from other cultures and apply it to the Southern plate.”

Today, the James Beard Award winner stands before the stove alongside WKRG anchor, mom and aspiring foodie Devon Walsh with a different mission: getting more families in the kitchen.

“I’m trying to take the mystique out of cooking and food, ” Besh explains, wooden spoon in hand as he demonstrates to Walsh how to tend the steaming dishes on the stove. “We all appreciate food, we appreciate people’s best attempts. There’s no right or wrong way about it — anybody can do it.”

Throughout the morning as he instructs Walsh, sharing stories of meals he prepares in his own home, the phrase “chef it up” makes its way into conversation time and again. Have some leftover rice? “Chef it up, ” Besh says, smiling as he chops up ingredients for fluffy and flavor-packed Cajun fried rice. Want to add some flair to your child’s school lunch? “Chef it up, ” by making a savory wrap. And the catchphrase perfectly illustrates his goal of empowering home cooks to fully embrace the gigantic experiment that is cooking.

The dishes Besh and Walsh prepare, recipes from his forthcoming cookbook “Besh Big Easy, ” boast plentiful serving sizes, absolutely mouthwatering aromas and “plenty of garlic” (one of Besh’s favorite ingredients). While all of the offerings feel familiar and classically Southern — oyster stew, stuffed pork chops and bread pudding, to name just a few — they taste otherworldly, as though Besh had anticipated precisely what you wanted and granted every wish. Perhaps he did.

“Our wives are never sure whether we go to the hunting camp to hunt, or to cook, or just to hang out together, ” Besh says, smiling. “But you’d better believe we do all of those things obsessively and competitively and have done so with the same group since we were all a whole lot younger: Drew Mire, Blake LeMaire, and my brother-in-law, Patrick Berrigan, the selfsame Patty Joe of this infamously tasty recipe. It’s even better if you’ve shot the ducks.”

1. Preheat the broiler.
2. Season the duck strips with salt and pepper and lay out on a platter. In a bowl, mix the thyme, parsley and cayenne into the softened cream cheese; add salt and pepper.
3. Put a slice of jalapeño on each duck strip, then spoon on 1/2 tablespoon of seasoned cream cheese.
4. Wrap each strip around the filling, then wrap a piece of bacon around the duck. Secure the poppers on skewers.
5. Broil the skewers until the bacon is crispy and slightly charred, turning once. Serve immediately. Makes 16.

“Leroy was a country cook with Isleño roots, and proud of it. Fat local oysters and the pan sauce made from their liquor are the secrets of this stew.”

1. Cook the leeks and garlic in the oil in a large saucepan over medium heat until softened, about 3 minutes.
2. Add the tomato, green onions, oyster pan sauce, and thyme, increase the heat to high, and bring to a boil.
3. Lower the heat to a simmer, add the oysters, and cook just until they become firm and their edges begin to curl.
4. Season to taste with Tabasco, lemon juice, salt and pepper, and stir to combine the flavors. Serves 6.

“The rich flavor of this stew comes from a simple oyster pan sauce. I make it by heating some olive oil in a skillet with a diced large onion, a minced fennel bulb, 4 minced garlic cloves, a heaping teaspoon each of crushed red pepper flakes, thyme, tarragon and 2 bay leaves. Once the vegetables have softened, I add 1/2 cup heavy cream, 1 1/2 cups dry vermouth and 3 cups oyster liquor or water. Increase the heat to high and reduce the sauce by half,  about 15 minutes.” Makes about 3 cups 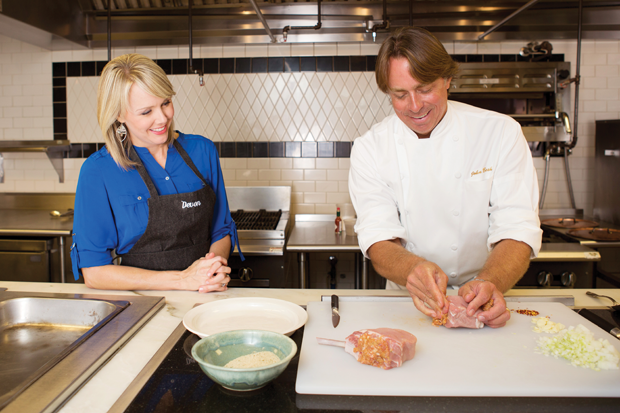 “Every little roadside meat market in Cajun country has these sausage-stuffed pork chops. The key to making them at home is to find thick, luscious chops that will take deep cuts to make roomy pockets to stuff. Leaving the bone in adds a little bit more flavor.”

1. Preheat the oven to 350 degrees.
2. Heat the bacon fat in a large skillet over medium-high heat and add the onions. Cook, stirring, for 5 minutes or until the onions begin to brown. Add the celery and garlic and continue to cook for another 3 – 5 minutes. Transfer the onion mixture to a large bowl and mix in the sausage, stock, egg, breadcrumbs and pepper flakes.
3. Create a large pocket in each of the pork chops with a small knife, cutting the meat in half just to the bone. Fill each of the pork chops with the sausage stuffing and season the outsides with plenty of salt and pepper.
4. Sear the pork chops in the oil in a large ovenproof skillet over medium-high heat until golden brown on both sides. Place the skillet in the oven and bake for 15 to 20 minutes, until the chops are cooked through. Serves 4.

“Making stock is not complicated. I freeze the carcasses from every chicken I roast and make stock when I have enough of them. I start by putting the carcasses in a stockpot. Often I’ll brown some chicken and/or turkey wings in the oven (about 1 pound of bones total), and throw them into the pot as well. I then add a couple of chopped carrots and celery stalks along with a few cloves of crushed garlic and a couple of bay leaves. Then I pour in enough cool water to cover the bones by a few inches and bring to a boil. Then simply simmer for about 2 hours. Strain it all and you’re done. (And remember, in a pinch, do as so many New Orleans home cooks do: use water.)” Makes 2 cups

“This is just a fancy version of dirty rice. Made with crabmeat, fresh green peas and any wild mushrooms you can get your hands on, it can be a meal in itself.”

1. Heat the oil in a large skillet over high heat. Add the wild mushrooms and cook until browned. Add salt and pepper.
2. Lower the heat to medium-high and add the smoked sausage. Then add the garlic and sweat until translucent.
3. Stir in the rice, then the green peas and crabmeat. Stir just until warmed through. Stir in the green onions, and season with Tabasco and more salt and pepper. Serves 8. 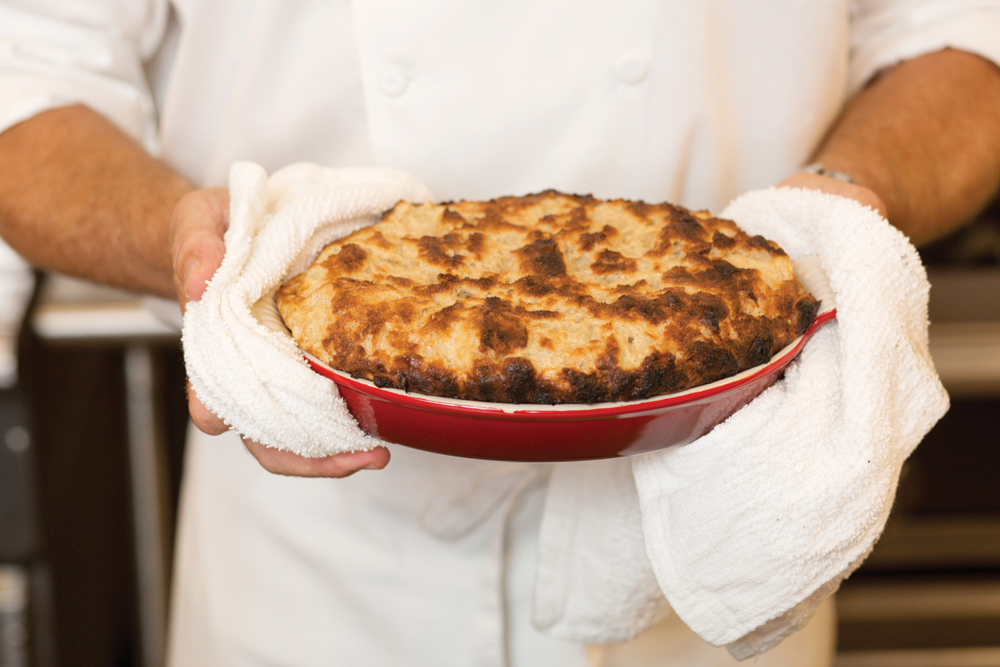 “Do you have to make this bread pudding with French bread? Well, that’s the bread we get in New Orleans — those light, fluffy loaves, like Leidenheimer’s, are the ones we make po’boys from, and it’s what my Mama uses. They make an unbelievable bread pudding. I like to keep the bread in the egg mixture still a bit soupy — that’s the perfect consistency. And the buttery rum sauce? ’Nuff said.”

1. Whisk together milk, cream, eggs, sugar, cinnamon, vanilla and zest in a large mixing bowl. Stir in bread cubes and soak for at least 30 minutes (longer is fine).
2. Preheat the oven to 350 degrees.
3. Butter a large baking dish. Pour bread mixture into the prepared dish and bake until crispy and golden, about 45 minutes.
4. Pour the Buttered Rum Sauce over the pudding and enjoy! Serves 8 – 10. 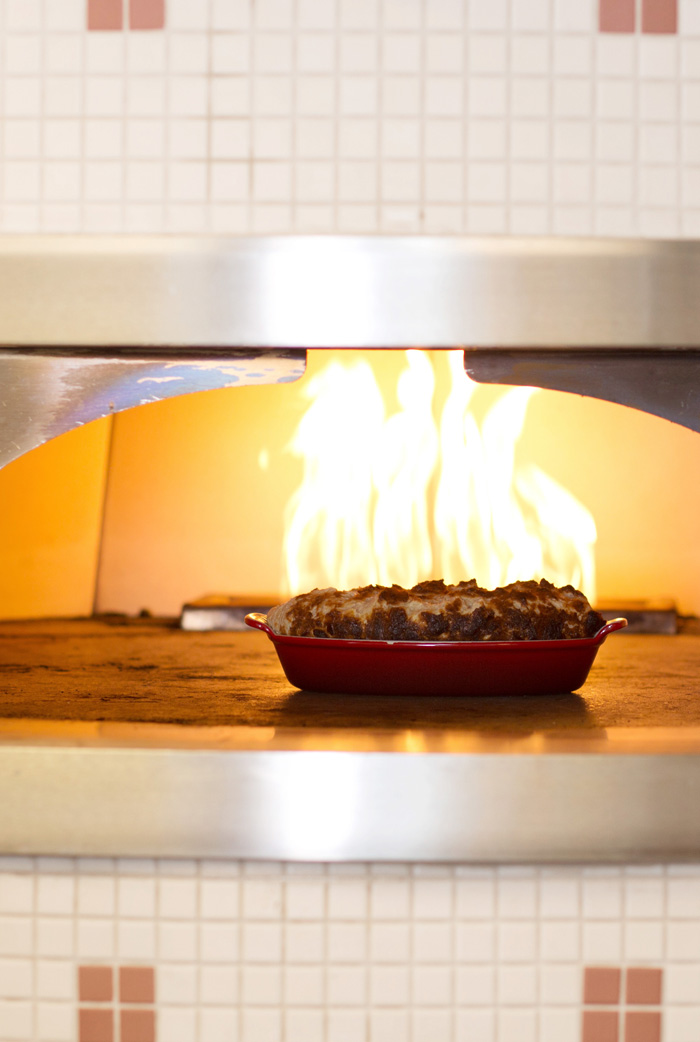 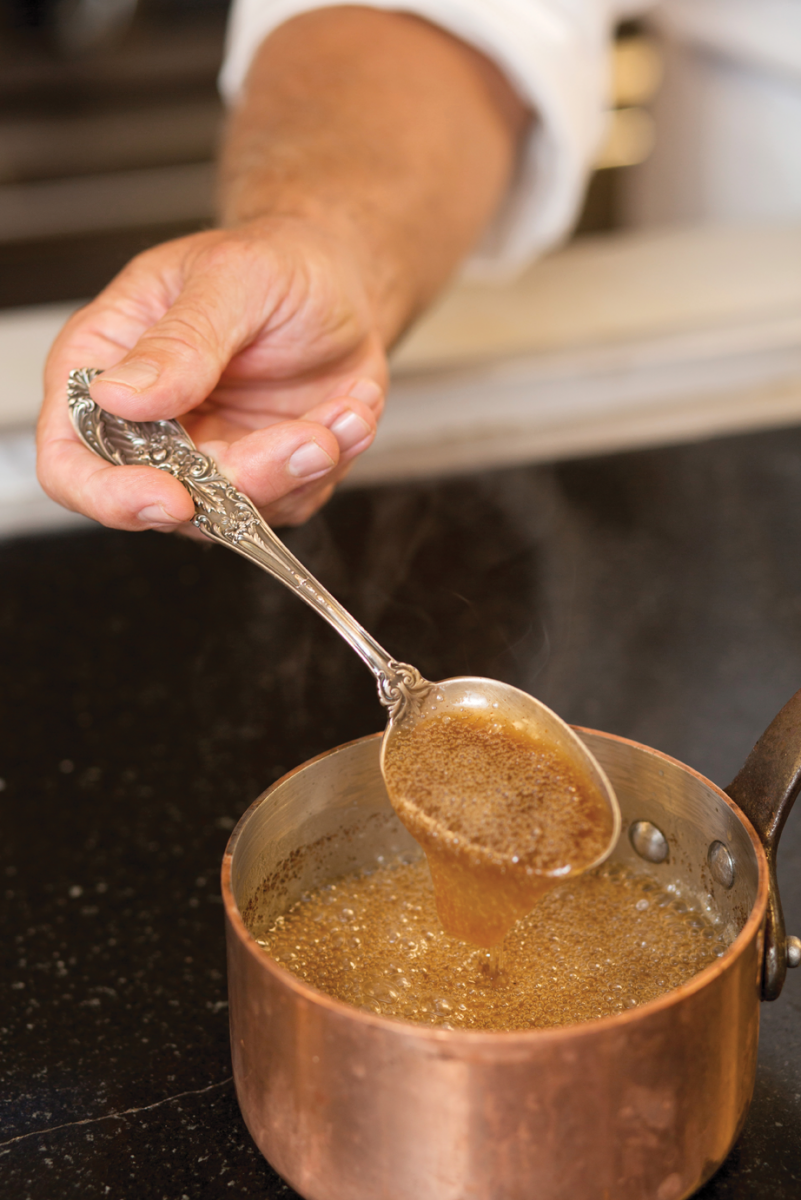 1. Melt the butter in a medium saucepan over medium heat until it turns a light brown color, with a rich nutty aroma, about 5 minutes.
2. Add the corn syrup, sugar, rum, cream, vanilla and salt.
3. Reduce the heat until the sauce thickens enough to coat the back of a spoon, about 15 minutes. Then remove from the heat.