It’s a classic combination of eating and entertainment: the date-night duo of dinner and a movie. It has also turned out to be a fun, fabulous fundraising concept for The Crescent Theater Film Society. The original idea was born back in 2011 while board member Dianne Martin was watching the award-winning movie “The Help” at The Crescent. Martin thought it would make an imaginative, inspired event to create an evening around foods from the film. Her fellow board members all assisted as the group prepared the traditional, retro Southern fare for a sell-out crowd that August. The party was a resounding success.

The board recently decided to stage a repeat performance. A unique opportunity arrived with the opening of the movie, “The Grand Budapest Hotel.” “The wacky plot and exotic setting allowed us to develop a Hungarian-themed evening, ” says Carol Hunter, above right, board member and creative director of the Downtown Mobile Alliance.

“The Dinner and a Movie fundraisers have become an entertaining way to raise money for a wonderful, valuable venue and have provided critical funding to help cover the rent and other improvements, ” Hunter says. “We enjoy producing the events, and since they always sell out, the audience must have as much fun as we do!”

In addition to the cinema receptions, the group has also prepared food and specialty cocktails for fundraisers featuring radio plays, which are dramatized acoustic performances. These have included “Minced!, ” “Meet the Candidates” and “Up the Creek, ” all by local playwright Danielle Juzan.

The creative force behind The Crescent, Max Morey, above left, says the benefits have been a welcome, wonderful way to showcase the gem of a theater. “Often, people don’t realize that The Crescent is not simply a theater. It’s a social setting where people gather before, during and after the feature.”

The affair was held across the street from The Crescent Theater at the former Rollins restaurant. Board members wore vintage attire and served a splendid Southern supper including the following recipes.

The strong, sweet libation is renowned for tasting like a tropical ladylike beverage, while still packing a proverbial punch. It was served as a specialty drink at the first fundraiser.

1. Shake together first 6 ingredients and pour over ice in a tall glass.
2. Garnish with pineapple and cherries. Makes 1 serving.

Mrs. Wilfred Cole’s recipe comes from “Southern
Sideboards, ” a cookbook published by the Junior League of Jackson, Miss., where “The Help” is set. This traditional recipe thankfully does not contain Minnie’s special ingredient.

1. Cook the condensed milk, chocolate and salt in the top of a double boiler over boiling water until melted, smooth and thick, approximately 5 minutes.
2. Slowly add water while stirring and let thicken again, about 8 – 10 minutes.
3. Stir in vanilla.
4. Pour mixture into shell and refrigerate.
5. Serve cold with whipped cream on top. Serves 6 – 8.

Ambrosia was once a Southern staple at most holiday meals, picnics and church-related covered-dish suppers. This favorite is also tasty served frozen.

1. Drain fruit in colander for about 1 hour.
2. Blend gently with sour cream and marshmallows. Stir in coconut.
3. Best if prepared 1 day ahead and refrigerated overnight. Serves 8 – 10.

This event was graciously hosted at The Noble South, also across the street from the theater. Board members wore various shades of pink, the signature
hue of the film, and served Hungarian fare.

This tangy, tasty potato salad is a crowd-pleaser.

1. Place potatoes in a 4- or 6-quart pot with water to cover.
2. Bring to a boil, cover and simmer, stirring occasionally during cooking until a knife can easily be inserted in potatoes, approximately 15 – 20 minutes. Drain and rinse under cold water.
3. Let cool slightly, then cut in halves or quarters.
4. Layer warm potatoes in a medium bowl.  Sprinkle with 2 tablespoons of the tarragon vinegar and salt and pepper.
5. Mix remaining vinegar, mustard and shallot in a small mixing bowl. Gradually whisk in oil until combined.
6. Pour mixture over potatoes, tossing lightly to coat.
7. Refrigerate until ready to serve.
8. Bring to room temperature and toss with parsley. Salt and pepper, to taste. Serves 6. 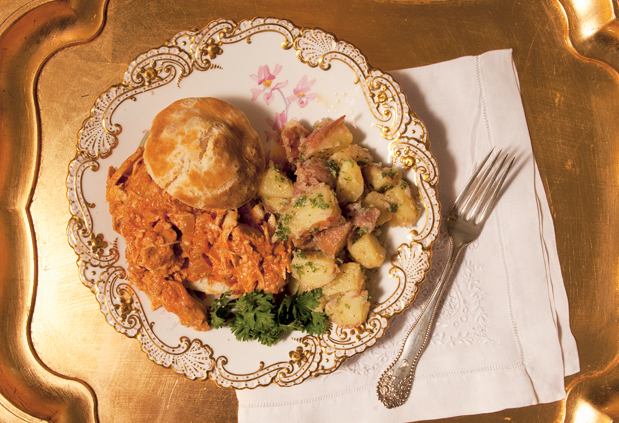 This classic Hungarian dish has achieved international acclaim. At the fundraiser, the creamy concoction was served over homemade biscuits.

1. Preheat oven to 350 degrees.
2. In a medium, heavy-bottomed pot or Dutch oven, sauté onions in olive oil on medium-high heat until translucent. Add garlic. Stir for 1 minute.
3. Season chicken with salt, pepper and caraway seeds and add to the pot.
4. Cook chicken for a couple minutes to seer in the juices. Stir in paprika. Add tomatoes and stir in peppers. Add water and bring to boil.
5. Reduce heat, cover with lid and slowly simmer for a few minutes.
6. Remove lid and place pot in oven.
7. Bake until meat is tender and cooked through, approximately 30 – 40 minutes.
8. Remove from oven, shred chicken from the bone and return meat to pot.
9. Stir in sour cream and serve over noodles, rice, biscuits, or by itself. Garnish with an additional sprinkle of paprika. Serves 4 – 6.

The committee named this beverage after the film’s flamboyant lead character.

1. Mix all ingredients together. Serve over ice. Makes 1 drink.