Butch Cassidy’s Café
Mushrooms are no longer in the dark, because Butch Cassidy’s Café shines the light on the fungus among us. The restaurant serves up about 40 pounds a week of the Wild Bunch Shrooms appetizer. Each comes with a sidecar of rich and creamy white dipping sauce. The app is so popular that some customers come in just for the mushrooms and then plan their meal around it.

“The batter makes it, ” claims general manager James Seewer. “It’s a wet, spicy mixture of top-secret stuff.” The mushrooms may no longer be in the dark, but Butch Cassidy’s recipe is still top secret. So don’t try this at home, kids; just request a batch. A delectable order is about two hand scoops of savory shrooms, a delicious spore that’s so much more. 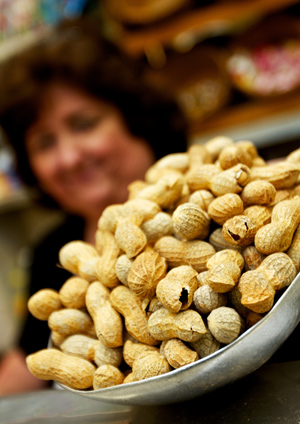 A&M Peanut Shop
Resistance is futile. The aroma of roasting goober peas wafting from the A&M Peanut Shop is captivating. “The smell sells, ” smiles owner Deborah DeGuire, above. As the fragrance of hot peanuts pours out into Dauphin Street, very few pedestrians just keep  walking past it. Chocolate-coated, caramel-dipped, icing-bathed, salted, spiced or plain, A&M shells out tasty peanut perfection at its absolute finest.  “But our best seller is the plain roasted peanut, ” DeGuire says. “We can easily go through 500 pounds or more in a week.” Fresh-roasted peanuts are cranked out about every 30 minutes in a 100-year-old storefront roaster. Customers go nuts for the salted, bagged and delicious treats. In fact, no trip to LoDa is complete without a scoop or two. 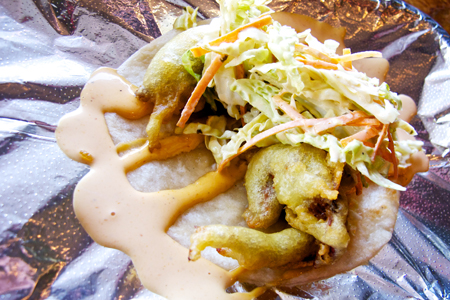 Dragonfly Food Bar
It’s not easy being green, especially when you’re a blue crab. But soft-shell crab tacos served at Dragonfly Food Bar have a slight green tint because of the wasabi paste they’re cooked in. Be not afraid.

And don’t be alarmed by memories of electric green sushi bar wasabi that packs heat comparable to eating an ignited firecracker, either. “Raw wasabi is hot; cooked it’s not, ” says Dragonfly owner and chef, Doug Kerr. “We take fresh blue crabs, bathe them in a tempura batter, add wasabi, and fry in granola oil until crispy.”

Kerr is confident, one bite of his Soft-Shell Crab Taco and you too will join Fairhope’s crustacean nation. “People flip for it, ” the proud chef says. “If you try one, you’ll come back and try three more.” 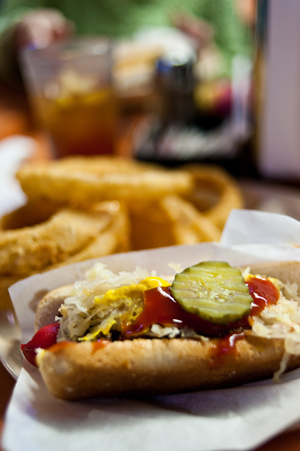 Dew Drop Inn
Six flags have flown over Mobile. Tragically, only the last knew our hotdogs — perhaps explaining why the U.S. is a superpower and the first five are not.

Regardless, Dew Drop Inn employees claim the Alabama tube steak was commercially introduced to Mobile in 1924 with the opening of their restaurant. One doesn’t eat hotdogs in Mobile; you “Do the Dew.” And I Dew declare, “It’s good.”

“It has a spicy taste, ” says server Addie McKee. “But not too much. It’s just an edge, not over the top.” What is over the top is apparently recession-proof hotdog sales, because the Dew Drop Inn can sell 2, 000 a week. So maybe the ultimate stimulus package includes sauerkraut.

Ed’s Seafood Shed
If you can’t visit Dauphin Island’s Estuarium, go to Ed’s Seafood Shed and order Yo Mama’s Platter, because much of the local marine life represented at the Estuarium is on this plate.

“People are overwhelmed by the sheer size of it, ” says Todd Stagner, manager of Ed’s Seafood Shed. The 27-inch-long platter was so named because “Yo’ mama said don’t eat this much in one sittin’.”

The meal starts with heaping bowls of scrumptious house coleslaw, followed by a cup each of greens, grits and gumbo. And then comes Sea World on a platter: two pieces of fish, five scallops, five fried oysters, five jumbo shrimp and a half-pound of crab claws, all piled sky high on top of a bed of fries and hush-puppies. Dessert is a large slice of devil’s food cake with fudge sauce, whipped cream, nuts and a cherry. 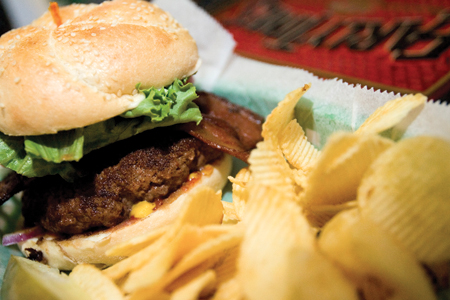 Callaghan’s Irish Social Club
USA Today ranked the hamburger at Callaghan’s as “the best burger in Alabama.” The national newspaper said of the little diner, “Get there early because the line forms early, and this great burger can sell out.” And the cheeseburger is even better.

“What makes it so good, ” owner John Thompson says, “is we do not skimp on anything.” Everything is fresh, and some things are top secret. Don’t ask what the special spices are, or the term “fighting Irish” will take on new meaning. But, what we do know is that, in addition to those, requirements to build a Callahan’s cheeseburger include one-half pound of beef, and the choice of five cheeses — American, cheddar, Swiss, pepper jack, or provolone. I speculate this burger could be the inspiration behind the song, “When Irish Eyes Are Smiling.”

Pollman’s Bake Shop
Mobile’s Carnival king cake originated in New Orleans. The Pollman family brought it to Mobile, tweaked the recipe and made it famous — only fitting since the Big Easy stole our Mardi Gras, but I digress.

“My uncle discovered king cakes while attending a New Orleans bakers’ convention, ” recalls Fred Pollman, owner of Pollman’s Bake Shop. “In 1959, we introduced the cake to Mobile with some modifications.”

In a New Orleans-style king cake, the filling is in the center.  But, in the Port City’s version of the decadent carnival confection, the filling is instead folded into the dough so that it’s distributed throughout the entire cake. Next, add icing, and you’ve got the iconic Pollman’s cake, which rivals the traditional MoonPie as Mobile’s official food of Mardi Gras. Long live the king — cake. 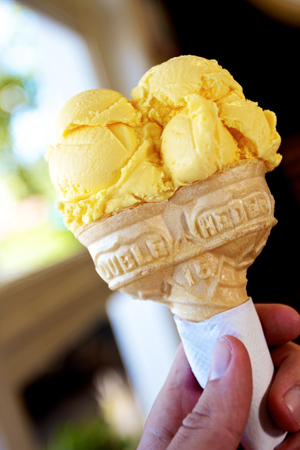 Here’s the scoop: Wayne combines homemade ice cream with a secret, lemony mix. The result is a bright yellow, tangy-sweet concoction that simultaneously chills the taste buds but warms the heart.

To the unenlightened, ice cream with lemon strikes a sour note. Wrong! “People who normally do not like lemon, love this, ” Wayne says. “Nine out of 10 people who try it, buy it” — to the tune of about 20 gallons a week. 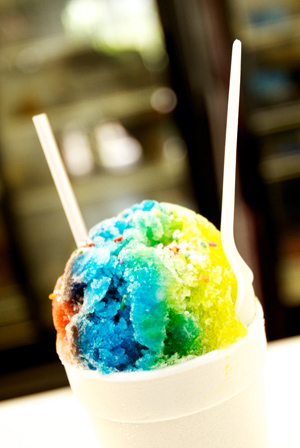 Island Rainbow Restaurant
Ice and snow on Dauphin Island? Yes! And it’s a Humdinger — the name given to a scoop of flavored shaved ice, a scoop of vanilla ice cream, and another scoop of shaved ice sweetness on top. The 16- to 20-ounce frosty mountain resides on the side of Dauphin Island’s main drag at the Island Rainbow Restaurant. Life is good on the island when you realize the only concern here is which of the 56 fruity, colorful flavors you want doused over your snowballs.

“Try the ‘Rainbow, ’” says crew member Ben Clough. “It’s a mix of blueberry, cherry and banana, which yields five colors of the rainbow.” It’s always a crowd favorite for children of all ages.

Cobblers are cooked old school. “Our recipes are guidelines, ” says executive chef Danny Spybey. “We can hold, touch and examine a blackberry, for example, and determine the amount of sugar or butter to add in the recipe.” And it works. Burris dishes out 1, 000-plus cobbler servings a week. Eighty percent are sold with ice cream. 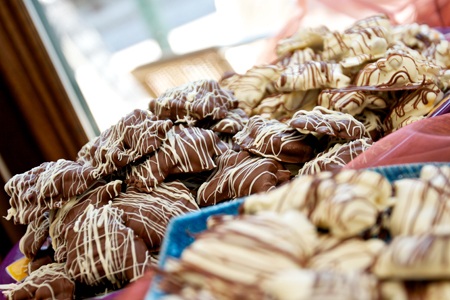 Three Georges Candy and Nuthouse
Mobilians eat so many Three Georges pecan turtles that they could become an endangered species. Three Georges has been perfecting these confections since 1917, when they opened shop in the Saenger Theatre lobby. These folks know what they are doing. “We make two enormous batches a week, ” says manager, Ann Marie Crawford. “The turtle is made totally from scratch.” It is pecans, covered in caramel, covered in chocolate, topped with “wow, it’s good.”

Did we miss your favorite Bay area dish?
Share your can’t-miss picks on the Mobile Bay magazine Facebook page.