Paul Outlaw and Jennifer Catron attract a lot of attention these days, as major participants in a revitalization of performance art, a medium popular in the 1960s. In their chosen genre, success is largely dependent on sparking some form of audience participation. But instead of shocking and disgusting viewers in an attempt to force a response, as was often done in the art form’s early days, Paul, who was born in Spanish Fort in 1980, and his partner, Jennifer, use wit, humor and meticulously crafted artistic environs to subtly elicit it.

After graduating from Fairhope High School, where he’s remembered as a star athlete and 1998 senior class president, Paul made his way to the University of Alabama as an art major. He went from there to New York for a three-year stint as sculptor Tony Matelli’s studio assistant.

“I left the University of Alabama with a sculpture degree, and that was my focus until grad school, ” his voice trails off as Jennifer completes his sentence: “And meeting me.”

As classmates at the Cranbrook Academy of Art, in Michigan, both earned master’s of fine arts degrees in sculpture. Their broadly shared goals, ideas and artistic beliefs kept nudging them into joint projects.  “We never set out to collaborate, ” Jennifer explains. “It just kind of happened naturally. We moved to New York, and we’ve been collaborating ever since. ” 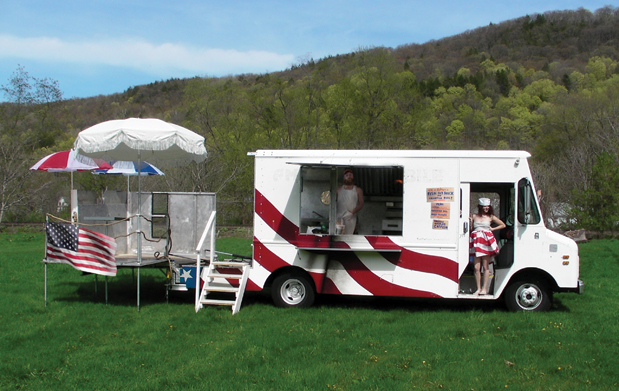 ”It was a huge success, ” Outlaw says. “We were able to pay for the project from the food sales. But we’re not restaurant owners. We’re artists. It ran its course.”

Making a Name for Themselves

Their first major shared success in Manhattan was with Jen & Outlaw’s Fish Fry Truck and Crawfish Boil. It landed them in the New York Times — and a host of other publications, including an Oxford American magazine feature “SOUTHERN ART: The New Superstars of Southern Art.”

“We cut the back end off a delivery truck and put hydraulic arms on it, ” Paul says. “The back would open and fold out like a pop-up book. We had tables and chairs, and people were invited to come up and sit down. But it wasn’t just a food truck. It was our artwork: a performance. The whole point was this cross-interaction between different cultures in the city. It manipulated the environment, to get people to a different place. When they were in the vicinity of our truck, they were in a different world. People were talking to one another, smiling at each other, meeting their neighbors. That just does not happen on the streets of New York.”

Asked about that “Southern art” label at the outset of our interview in the couple’s Brooklyn studio, Paul drawls: “Just because I live in New York, that doesn’t mean that I’m not Southern, by any means. But in the field that we’re in, ” he continues, “a small group of the right people need to see what we are doing. So we are making it as easy as possible, for them to see us, ” he concludes, eliciting laughter from Jennifer. “We definitely are, ” she says, glancing at a giant papier-mache caricature of her own head: a prop from their recent one-night installation and performance, above, that entertained a highly participatory audience including many of those “right people.”

As 50 of the Brooklyn Museum’s major supporters seated along both sides of a 40-foot table enjoyed an elegant $1, 000-a-plate (and up) private dinner party, Paul and Jennifer dined directly above them at a table for two.

“We built a structure above their table and had our own private dinner party above their dinner party, ” says Paul. The table was on tracks, allowing it to move back and forth along the entire length of the one below.  “We had our own waiter, who also rolled back and forth, to bring us these giant papier-mache food objects filled with McDonalds Chicken McNuggets and Filet-O-Fish sandwiches, ” he says.

“And we were throwing it down to the people below us, ” adds Jennifer. “They loved it: Their hands were in the air ready to grab a chicken nugget.” 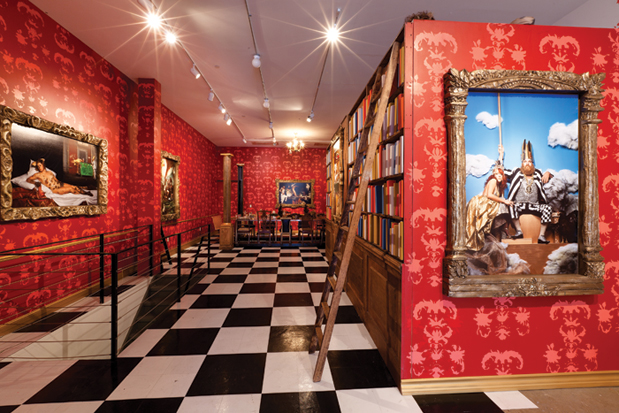 Paul and Jen’s true artistry is revealed as ethereal moments in time, which cannot be monetized. People do buy artifacts from their performances: props, prints and other physical elements that are left behind. But, like most performance artists, their projects are mostly self-funded. That is no easy task in a city famed for exorbitant rents. In addition, art on the grand scale that they’re known for requires a spacious, well-equipped work area.

Early on, they largely made do. They built Jen & Outlaw’s food truck during a two-month artist-in-residence stay at the Wassiac Project, located in a hamlet to the north of NYC. Other projects came to life, after hours, in a former employer’s shop. Then Paul and Louie Hinnen partnered to launch The Factory NYC, an art set building company. They initially built custom photo sets for fashion shoots, but now focus more on movie-like sets for events. “Big companies come to New York, rent a venue and want, say, an entire Parisian street market installed overnight, ” says Paul, referencing a commission completed earlier that week. They throw a party the next day, and then they want it removed quickly.”

The company topped $1 million in sales in its first year. Paul is surprisingly blasé about his entrepreneurial success. “We started this company so that Jen and I could have this space, ” he says, as we traverse their 7, 000-square-foot warehouse en route to the section designated as an art studio. “More time than I would like is spent on the company. But that’s necessary in order to make the gears in this room turn. What we are doing in performance and installation art is relevant. It’s important to us, ” he continues. “If no one is going to fund that for us, we have to find ways to fund it ourselves — and, so far, we’ve found ways to do it.”

Their next performance project will once again poke fun at art’s wealth-and-power elite. “Later tonight I’m pulling a very large blue bus in here, in order to cut the roof off. It’s going to be a double-decker tour bus. We’re cutting it up and putting a platform on top, with a staircase up, ” Paul says. The top floor will be filled with seats, and manned by guest tour guides from around the NYC arts world. The bus will give free tours of Chelsea and its major blue chip galleries. “The first floor is going to be a Souvenir-City-type operation, where passengers can take home all of their favorite artists’ work – our versions of their artwork – that they can’t afford at the gallery. Everything is tongue-in-cheek. We’re kind of laughing at the whole art world hierarchy, as well as at ourselves, ” he says.

“It’s especially relevant right now, because everyone’s mad at the bigger galleries and the bigger artists and how much money they’re getting. They’ve doubled their gallery space, ” Jennifer adds. “And all of the younger galleries are being forced out.”

Chelsea, Paul feels, is approaching the point where it all falls apart and moves somewhere else. Like what happened in SoHo and Tribeca.

The recent verdict in the Richard Prince plagiary case has given their project another target. Prince, whose works sell for millions of dollars, “re-appropriated” a far less famous photographer’s images. He made minimal changes to the photos and sold them as his own original work. In a very controversial ruling, the judge decided that Prince “changed the meaning of the artwork, ” which transferred ownership to him.

“That opens it up. We’re re-appropriating Richard Prince’s artwork: basically selling his prints, with like another little daub of paint on them. So we’re doing the same stuff, ” Jennifer says.

“We’re selling our souvenirs for souvenir prices, ” Paul adds. “This isn’t going to be million-dollar artworks. And we’re definitely highlighting that. It’s becoming an interesting time — a perfect time for us to come out with this.” 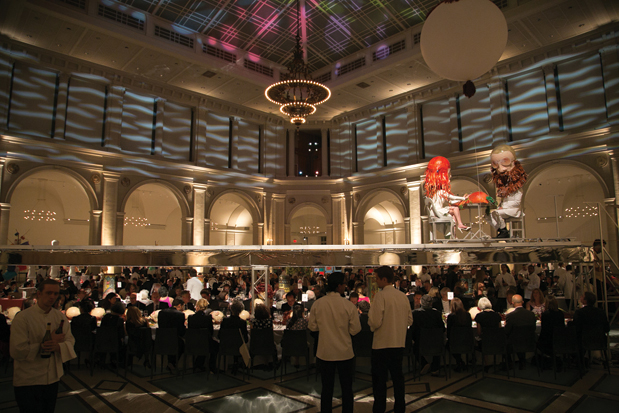 “Humor is like the outer skin of our performances. But we also make important points. The entertainment value gets the audience involved. Maybe tomorrow or the next day, they’ll think a little more about what they did there, ” Outlaw says.