When I walk into the Taproom of the Fairhope Brewing Company on a Wednesday morning, Brian Kane is on the phone. He is sitting at the beautiful, curved wooden bar staring into his MacBook. I step aside to let a worker push a keg past me, bound for the front door.

I take the opportunity to admire the Taproom. It’s huge. The furniture is all locally made, from the reclaimed wooden tables to the welded chairs. The entire aesthetic is very modern and clean. While enjoying a beer at the bar, you’re unlikely to forget that it was brewed only feet away. Behind the taps is a wall of glass revealing a peek into the brewing process; enormous metallic canisters that seem to belong in a James Bond shootout scene (think the Facility in GoldenEye for all my Nintendo 64 fans out there) hover in a well-lit room.

Brian finishes his call and introduces himself to me along with his fellow managing partner, Jim Foley. I can tell the two are busy today, but these guys are generous.

“So you’re expanding into bottling?” I ask. 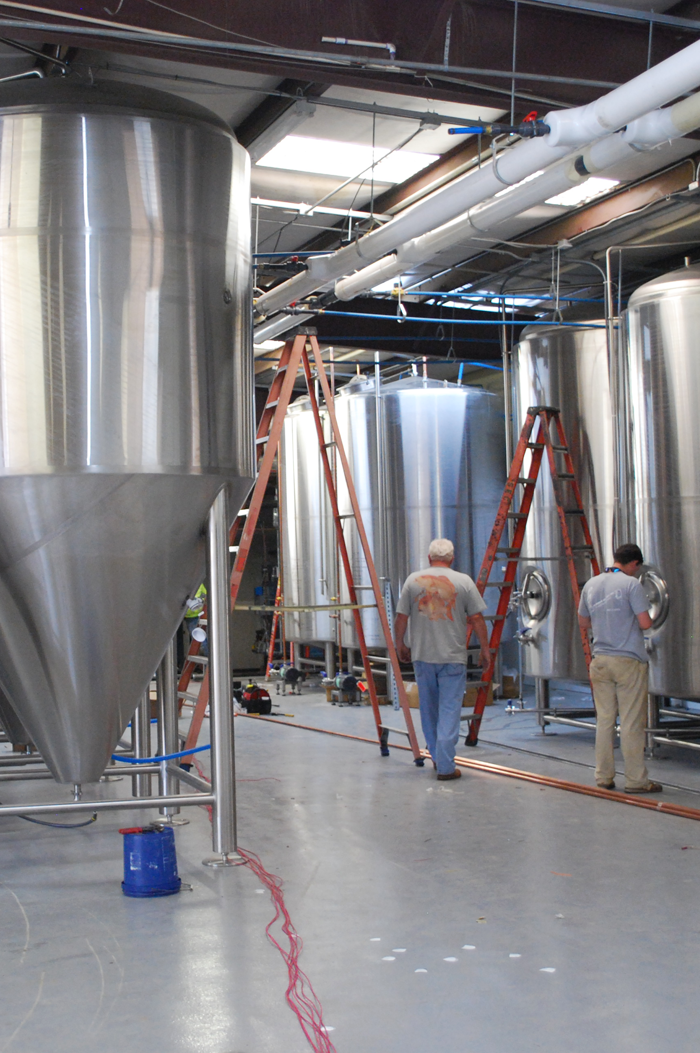 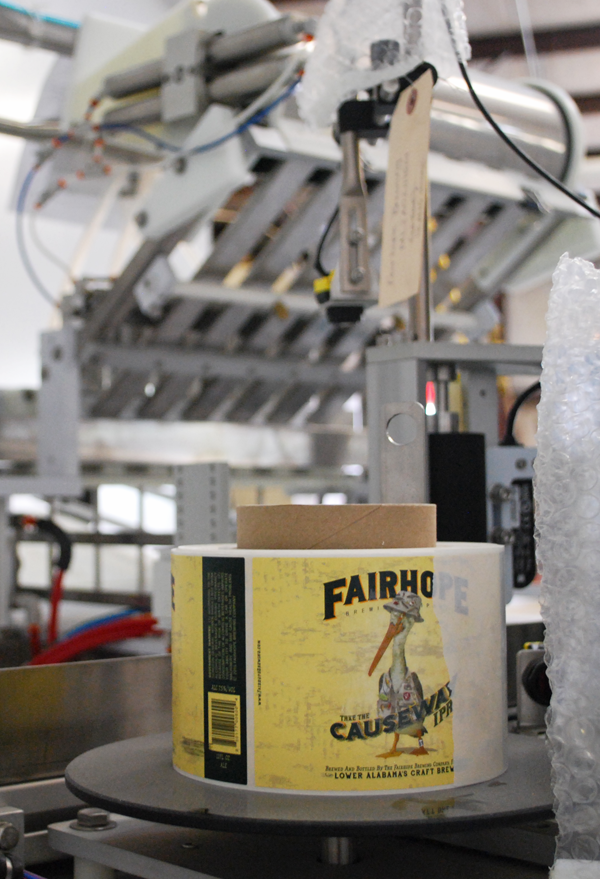 Brian walks me into the building next door. Inside is a hum of activity. I count nearly 10 workers busying themselves with various tasks. This new facility makes the one behind the bar look like child’s play. Fermenters, hot and cold tanks and conditioning tanks fill up the expansive space. “The room got smaller, ” says Brian when talking about the progress that’s been made. “We had all these plans for basketball courts and tennis courts, but not so much anymore.”

Conveniently, this building next door used to be a printing shop, but with advances in technology, the printer no longer needed so much space and opted to move into a smaller building. For Brian this is especially convenient because building in a completely different location might’ve required the hiring of a whole separate staff.

As I walk along the concrete floors of the brewing warehouse, Brian and Jim rattle off temperatures and processes that make me feel like I’m back in Honors Chemistry class. Yeast, sugar, carbon dioxide, fermentation at 68 degrees, boiling at 210 degrees, exothermic reactions – at a certain point I just turn my brain off to what they’re saying and instead focus on the enthusiastic way in which they’re saying it. These guys love their jobs.

With this new equipment being installed, the guys will be able to brew as much beer in one day as the equipment up front could produce in one month. That’s a big difference. The process will be much more efficient and streamlined and will actually allow the brewery to get a little more experimental.

“With this new equipment in the expanded building we’ll do our Fairhope 51, our Causeway and our Amber – the three we’re actually going to bottle, ” says Brian. Back up front, we’ll make our Everyday Ale, Judge Roy Bean – the ones we aren’t going to bottle. That’ll also open up a lot of room up front for some cool experimental stuff like a jalapeno IPA or a watermelon wheat.”

Last I heard, they’re expecting their first brew with the new equipment within days (around April 24 or so). 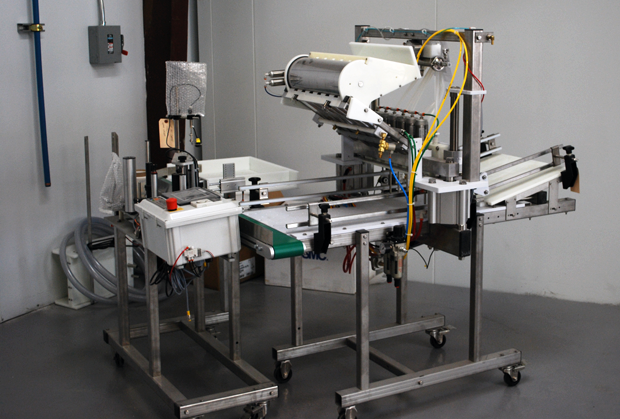 The brewery is growing, and it’s growing fast. Brian explains that expanding into bottling was always part of the plan, but he didn’t expect it to happen so soon.

“This is definitely faster than the timeline. We expected to be in bottles within five years.” A few months ago, the brewery celebrated its two-year anniversary. “We wanted to get our bottles out before someone came in with some big operation and filled up the shelves. We feel like this is our opportunity.”

I ask Jim where the bottling operation will take place, expecting some enormous machine with an “I Love Lucy” conveyor belt. “That right there is the bottling operation, ” he said, pointing behind me. The unassuming piece of equipment, pictured above, sits on rollers and is more impressive than it looks; it can bottle 2, 000 beers an hour, filling them, capping them and rolling them out to be manually placed into a six-pack holder. Three workers will tend to the machine when it’s running at full speed.

To all you draft beer lovers out there, never fear. Brian says the brewery will continue to keg a portion of its beer because “there’s no substitute for a pint glass of beer.” The majority of beer will be bottled, however, in a 2.5 to 1 ratio.

The plan right now is to release the first batch of bottles in Lower Alabama. Around the end of May/beginning of June (if all goes according to plan), we’ll start seeing the bottles popping up in our area at the Fairhope Piggly Wiggly, Whole Foods, Greer’s and select gas stations. “We’re not sure at what rate
the bottles will move. You can look at the numbers for how a bottle moves from, say, Denver to this area. But vice versa is a completely different story.”

In fact, there is a lot of uncertainty right now about the new bottling venture, but it sounds like Brian is mentally prepared for the challenge. “It’s gonna be a learning experience for us.” Brian says his head brewer is expecting a steeper learning curve going from the old system to the new system than going from home brewing to the old system. “You gotta go into something like this assuming you’re going to make some mistakes. And when you do, you have to just get past them, make a note of it and move on to something else.” 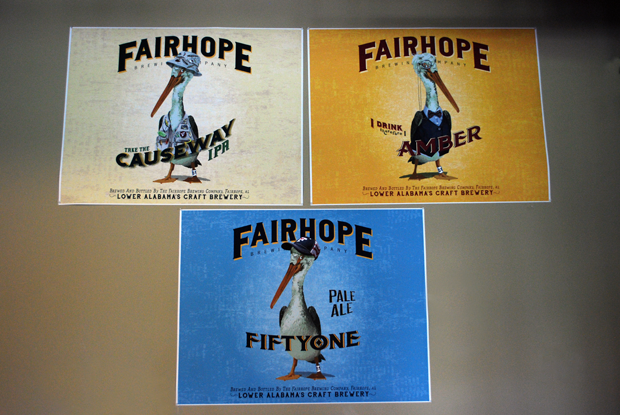 The brewery has been teasing new logos on social media for the past few months,  and according to everyone involved, designer Matt Whitfield hit the nail on the head. The crew wanted to stick with the idea of using a pelican in some way, but most of the pelicans they found either looked creepy or cheesy. “Matt came back with this pelican and we all thought, ‘Now that’s a good pelican.’ It’s not too realistic so it retains that cartoonish quality, but at the same time it’s not cheesy.” After several brainstorming sessions, they settled on the idea of using the same pelican on each beer but dressing him up with the appropriate accessories; the Causeway IPA pelican dons a fishing hat and vest and the I Think Therefore I Amber sports a monocle and a bow tie.

The playful logo is both practical and a savvy business move. While limiting the amount of effort that goes into creating a new label for another type of beer, it also establishes a continuity that Brian hopes will make it easier for customers to identify the label on the shelf and experience all varieties of the brewery’s products.

In the meantime, keep your eyes peeled on social media for further announcements about this exciting venture for Fairhope Brewing Company. And keep checking that beer aisle for a sharply dressed pelican.