Every Christmas Eve’s Eve, the boozy with cheer gather from all over the city, decked in their gaudiest attire. The occasion? Turtleneck Christmas: The most elaborate and revered holiday social affair in Mobile society – for the young and festive with warped and nostalgic senses of style.

In 2003, four Mobilians who had recently graduated from college, “had nothing better to do than to throw a party, ” says founder Robert McCown. These guys wanted to reconnect with old friends while everyone was home for the holidays ­– but in the rowdy style they had grown accustomed to in college – and a tradition was born.

At first, ’twas a humble gathering at Billy Ward’s house in Midtown, with no point other than “to dress up weird and party.” While this philosophy hasn’t changed, the size of the celebration has. Turtleneck Christmas is now held under a humongous tent off Old Shell Road across from Dreamland Bar-B-Que. This past year, more than 1, 000 people attended.

Per the name, dress code is key. Guests make merry in men’s turtlenecks (picture Mike Brady) and oversized and outdated holiday sweaters (a la Bill Cosby circa 1987). Over the years, the garb has become more outrageous, including adult-sized onesies, tight long johns (revealing in all the wrong ways), and taxidermic reindeer antlers.

Anna Copeland has a resourceful costume ritual. “I dig through old holiday decorations searching for anything sequined and steal ornaments off the tree to make earrings. Next, I pair a tacky turtleneck from the Junior League thrift shop with a Christmas tree skirt and hope Mom doesn’t notice!”

In recent years, the enormous event has featured a VIP lounge, rented zoo animals, a magic show, and the LeFlore Magnet High School marching band. And, you can be sure that there’s enough wild behavior to land most of yuppie Mobile on the naughty list. Last year, after a few drinks, one of the patrons successfully purchased (and eventually returned) a donkey from the bash’s petting zoo.

One of the night’s most anticipated traditions is the dance-off competition – truly a sight to behold. Three-time champ Richard Lyons’ moves are the stuff of legend. The master attributes his success to “keeping it groovy and staying in the moment” – and of course, his signature splits move.

Sadly, the hosts are unsure whether or not the get-together will continue this year. But let’s be honest. We’ve all heard that before. Remember, folks, a little gentle coaxing never hurt – especially in the name of Christmas spirits.

ABOVE Ross Lyell and Richard Wilkins mingle with a llama. Last year’s event featured several zoo animals. According to Robert McCown, “We try to have a new, fun element every year to keep people coming back.” 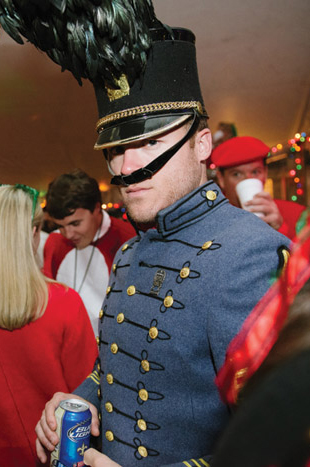 ABOVE LEFT Over the years, guests have become more creative with their costumes. This partygoer earns some points with his actual deer antlers adorned with Christmas ornaments. 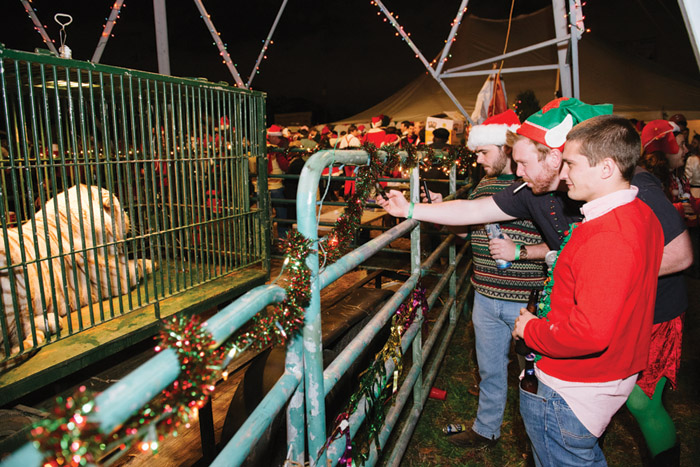 ABOVE Revelers pause to observe and photograph the massive tiger that attended last year’s fete. 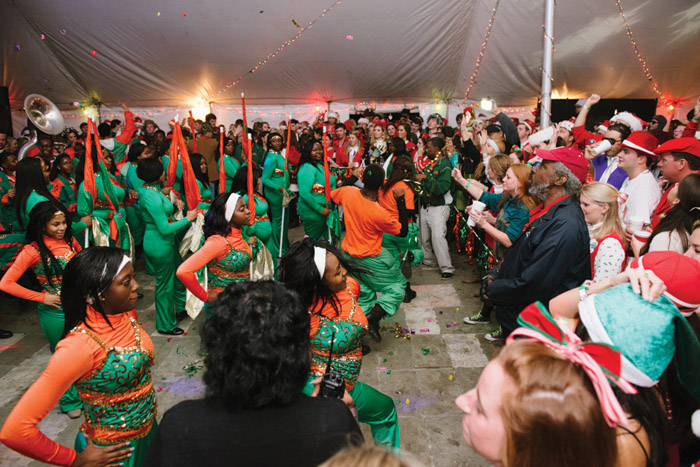 ABOVE LeFlore High School’s Mighty Marching Rattlers bring down the house for a packed tent of guests. “The marching band is my absolute favorite thing at the party, ” Amelie Inge says. “The dancers tear it up!”