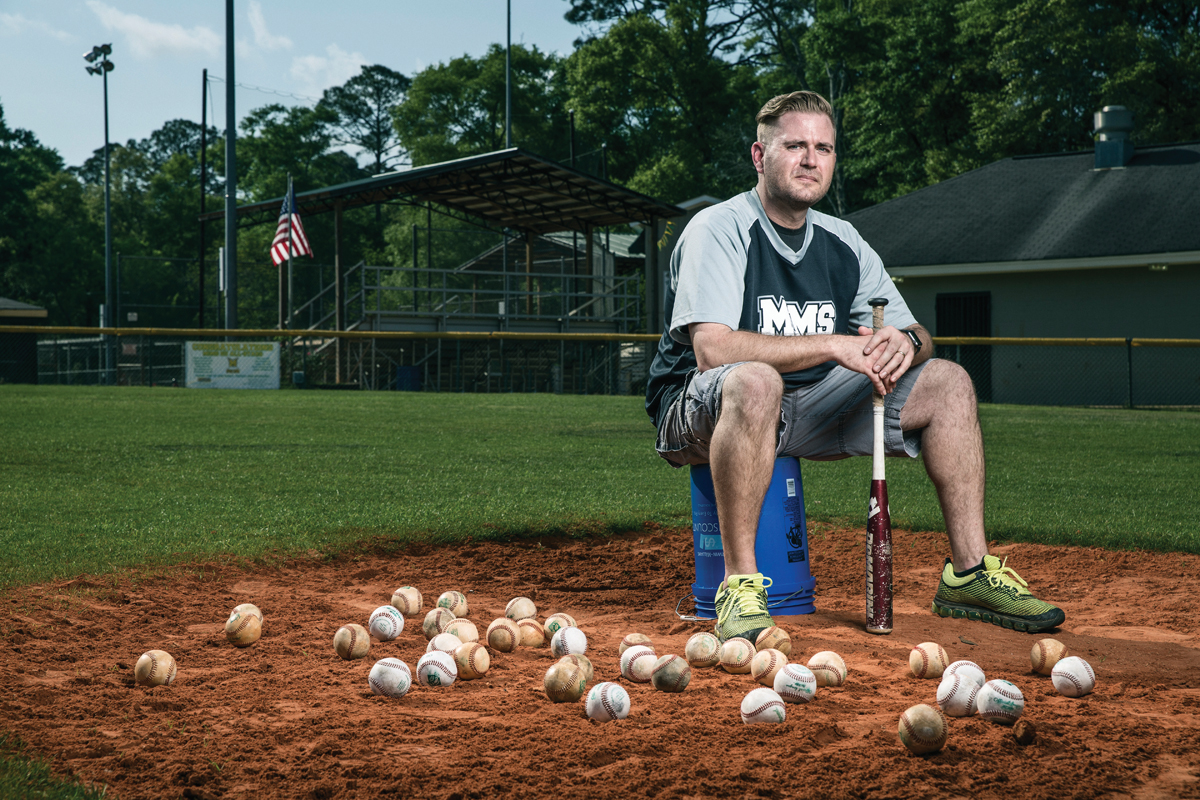 The ping of the bat, cheers from the bleachers and the aroma from concession stands can only mean one thing: Play ball! But the opening pitch to the final out on a youth baseball diamond is only the tip of a red clay iceberg. There is much work before, during and after the game; this is a job for Super Dad. He is the sultan of summer games, delegate of the dugout, mayor of the mound. Here, meet a few of the fathers going beyond the call of duty to ensure all the bases are covered.

David Bylinowski joined Mims Park when his son, Calvin, was 4. Calvin is now 14 and no longer plays ball at the park. But his father still does. David coaches his younger sons Henry, 11, and Ben, 8. He also serves on the board of directors. But do not be misled by the name. This board is not folks sitting around a mahogany desk conjuring policy. “It is a group of men and women with dirty, calloused hands, ” David says about those making Mims Park perk. “There are so many moms and dads who are out here, ” he says. “Sometimes the night before the jamboree, we stay and prep the field until 1 a.m., making sure it is ready before the next day’s games. It’s a busy night.”

David is often onsite three or four days a week. Chalk lines must be painted, litter removed, outfields cut, fertilizer applied. “It is a lot of work, but it’s worth it.”

In addition to watching his sons play ball, he finds it rewarding watching his kids helping other kids. “Our older boys are taking it upon themselves to mentor the younger players, ” David notes. “The youngsters love it and think it’s pretty cool having older boys teach them instead of being coached by some old guy.” 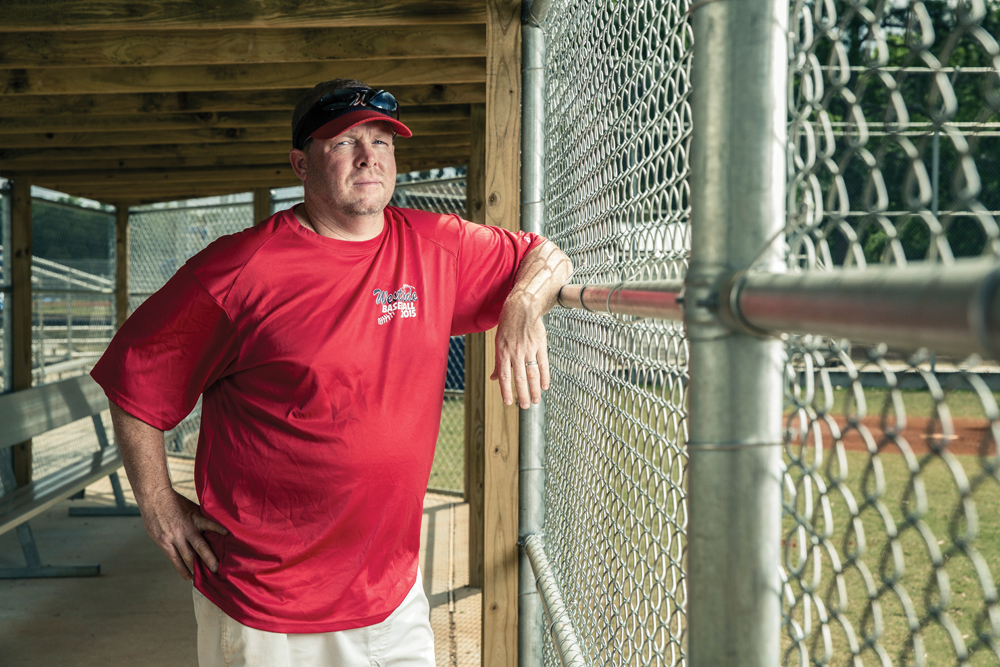 At Westside Park, Tim Hilpert serves as coach, board member, grounds and facility worker — you name it. His sons, Ethan, 10, and Brayden, 7, play on two different league teams. Tim coaches both. The boys’ father is no stranger to the diamond. In addition to coaching at Westside for seven years, he played for Spring Hill College and served as its assistant coach for two years. His Westside teams practice two or three times a week for two to three hours, plus they host games every day except Wednesday and Sunday.

Outside of coaching, Tim spends a few hours a day helping with league duties and manicuring the field. There is not all that much to do — other than add dirt, rake clay, drag the field, paint lines, install bases, chalk and paint, remove leaves, pressure wash dugouts, pick up litter and get the park ready for 650 kids.

“I grew up playing baseball and always appreciated a nice field, ” says Tim. “And I want the same for these kids.”

Charles Antinarella has coached his sons for 16 years. His oldest is 21 and out of the park as a player. But his youngest son is 13 and still at it. So is Charles.

Like the other coach-dads, Charles spends hours on and around the field. “Getting ready for the season takes tons of man hours, ” he says. “Fortunately, the City of Fairhope mows our grass. But uniforms must be ordered, sponsors confirmed, concessions organized. There are lots of other tasks that have to be dealt with daily. Ballparks have almost evolved into a full-time job for the volunteer people.”

All that work builds up to that first pitch. “And that is the reward, ” the Fairhope resident says. “There is nothing like being in the ballpark on game day. I enjoy seeing the people. And I just love the game of baseball — always have.”

“Don’t make this about me, ” insists Jeremy Glass, coach and board member of Matthews Park. “Yes, I work a lot of hours here, but many others do as well. We do what we can to make Matthews Park a better place — whatever it takes for kids to play ball.”

Of the park’s approximately 250 to 300 youth players, Jeremy coaches 12 T-ball players, ages 3 and 4. “We basically teach them how to properly run around the bases, ” he says about  the tiny players who are sippy cup eligible. He also coaches a minor league team of 9- and 10-year-olds. “They are competitive. They play for fun but also to win.”

A father of three daughters, Jeremy says, “I coach other people’s sons.” Through the years, he has also coached four of his nephews. But he works behind the scenes, too.

“We are here in the off season, almost year-round. The grass never stops growing, and the field and diamond always need tending.” Jeremy adds, “Running a ball league is like running a business where the employees aren’t paid. But you do it because you love it.”

An 11-year ballpark veteran, David Teague is a coach, president of the board of directors and volunteer for all things Municipal Park. “It has to be done, ” he says about serving the 550 young ballplayers. “If nobody works in the park, there will be no park.” So David steps up to the plate.

He has two sons: Brown has graduated from the Municipal Park leagues, but 10-year-old Jack, who has been here since age 4, now plays minor league ball.

David spends three or four days a week at the park, and that doesn’t include game time. There’s  registration, tryouts, scheduling, maintenance, concession stand work and field preparation. (Thankfully, the Municipal Park coaches share responsibilities for preparing their fields.) And then, of course, there is the coaching.

But, he notes, “I am one of many who do this, and I just coach one team. Some of these guys coach more. Scott Patrick coaches for two sons, and David Weems has three in the leagues. Now those are the super dads!” 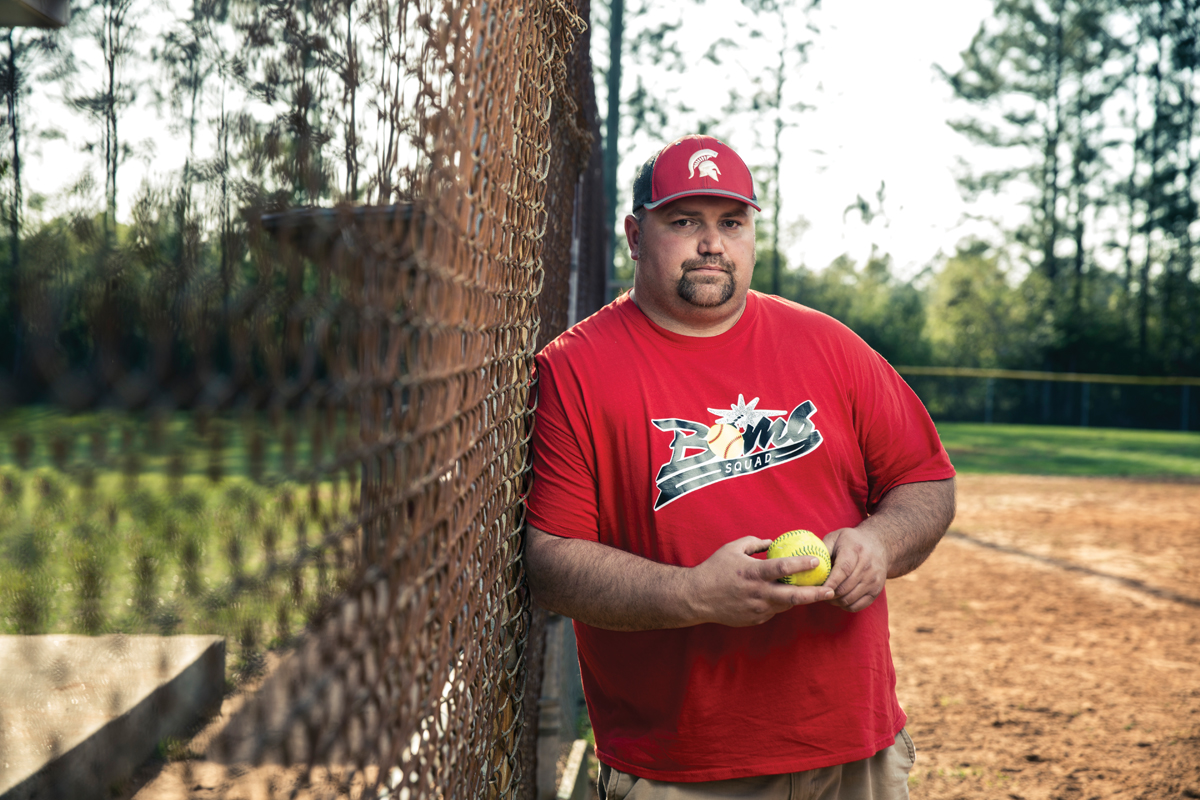 “I just enjoy being out here with my daughter, ” says Miller, who estimates that, during softball season, he spends about 20 hours per week at Oscar Driver Park. “But I also enjoy watching the other players learn the game, build sportsmanship and benefit from all the opportunities girls’ softball offers.”

He also notes that opportunities in girls’ sports were not always easy to come by. “Girls’ softball was almost unheard of when I was a kid, ” he recalls. “It is more popular than ever now, and it’s a much faster game. These girls are athletes, and they are out there to compete.” The Saraland young ladies play “fast-pitch” — as in greased bullet, phantom jet in overdrive, jaguar with his tail on fire fast. It is a sight to behold. “The game helps build their confidence, ” notes Coach Bobby. “It proves to them that they can do anything.”