Imagine if you had the chance to travel 135 years back in time and peek in at Jack Daniel’s Distillery in Lynchburg, Tennessee, just as it was getting off the ground.

That’s something like what you have in Big Escambia Spirits located just outside of Atmore. Escambia County resident Seth Dettling, a real estate man by trade, had such a fascination with spirits that he became one of Alabama’s earliest certified distillers with the state and federal credentials needed to run a distillery. He’s well on his way to bringing the first ever legal Alabama-made bourbon to market. Bourbon has to age two years in a charred barrel,  so it’s a bit like watching tortoises race.

While he waits for the $1.2 million in baby bourbon to reach maturity in his rickhouse, he’s been working on CRU Rum, which made its formal society debut in May at The Grand Hotel Marriott Resort in Point Clear (click here for more information). CRU Rum is made at his distillery from fresh raw ingredients and comes in three “expressions, ” as Dettling puts it. The barrels used to age the rum, which previously held tequila, red wine or white wine, impart these expressions, granting each a distinct flavor and drinking experience.

CRU Rum will be unusual in that it will have no additives, making it the rum of choice for true rum aficionados. “There’s no added colors, flavors, sweeteners … It’s pure rum from the still into the barrel and into the bottle. A lot of rum lovers don’t realize all the artificial stuff that’s in their drink. We’re breaking some serious molds here, doing things the way we think they should be done, ” Dettling says.

The little distillery on Big Escambia Creek also recently put up its 100th batch of bourbon. Their inaugural bourbon release is set for summer 2017, as the historic first barrel at the very top of the rickhouse matures in June. To see that barrel, be prepared to do some climbing. The rickhouse has now barreled over 7, 000 proof gallons* of spirits. (*A proof gallon is defined as one gallon of spirits at 100 proof, so any spirit less than 100 proof counts as less than a gallon, while any gallon at more than 100 proof counts, technically, as more than a gallon.) 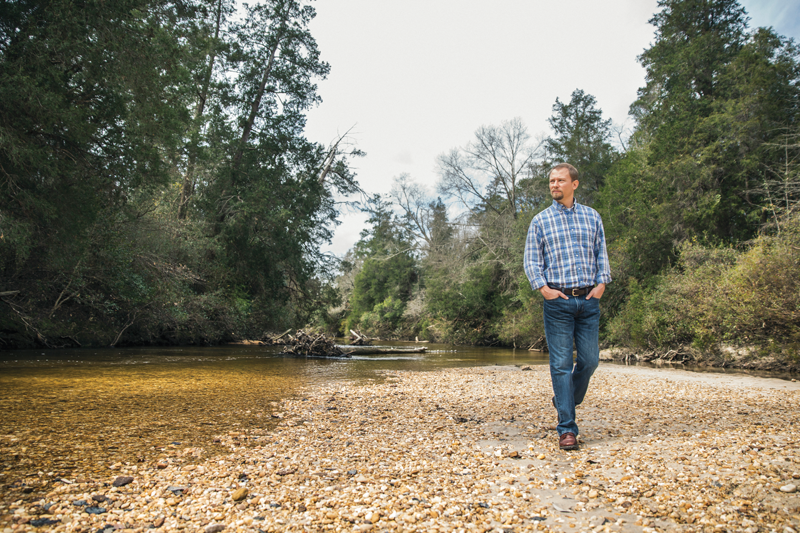 ABOVE The pastoral creek that trick-les just outside the distillery’s doors inspired the company’s name. 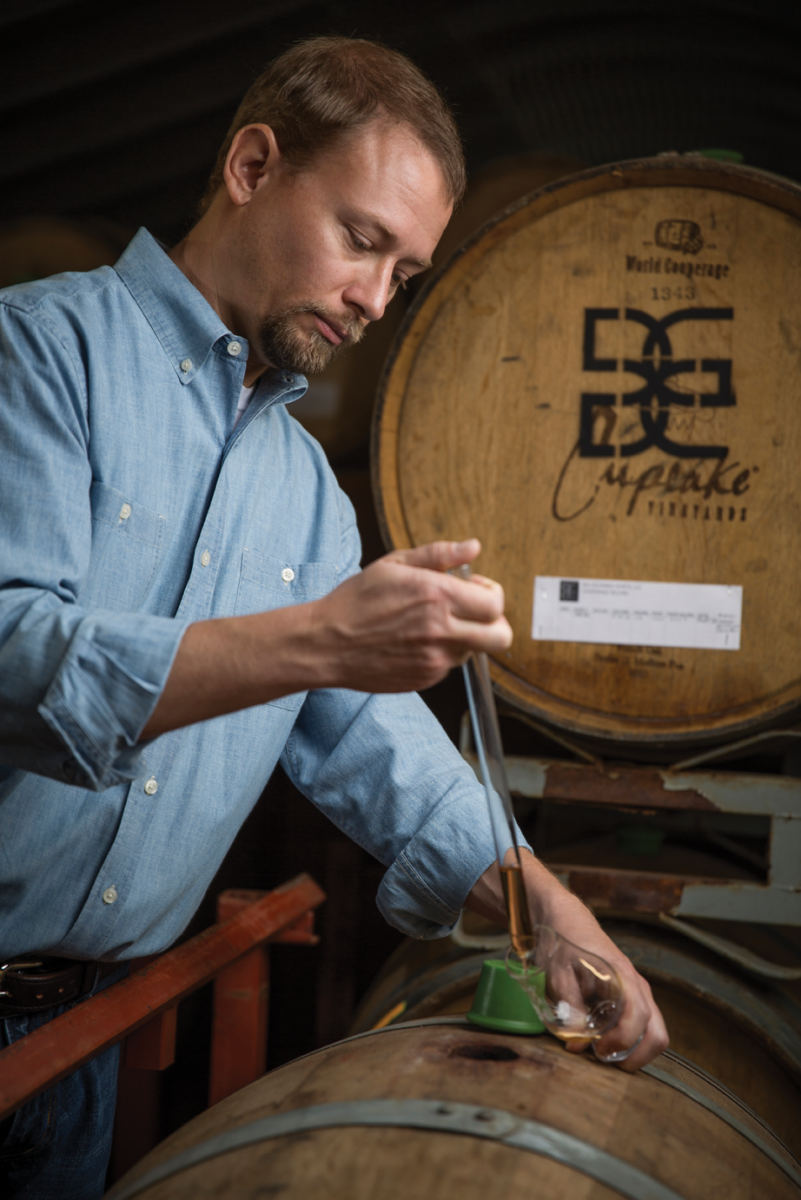 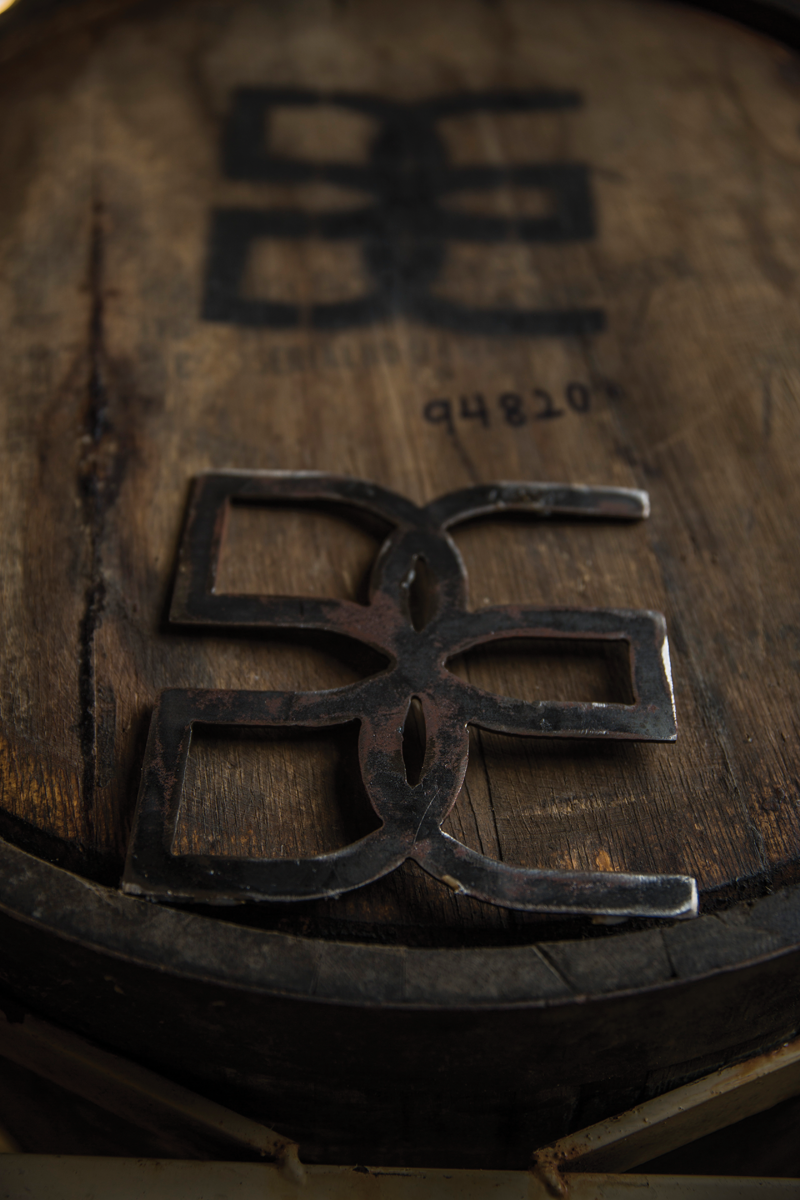 ABOVE LEFT Dettling keeps tabs on the liquid gold that awaits in his rickhouse of oaken barrels.

ABOVE RIGHT Big Escambia Spirits’ interlocking logo is stamped on top of old labels for tequila, red or white wine. Depending on the original use of the barrel,  an “expression, ” or subtle flavor, is imparted on the secondary spirit as it oxidizes.

Alabama’s potential for high-quality bourbon excites Dettling, and it’s no wonder why. The state’s high temperatures, he argues, create pressure in the barrels that pushes the bourbon deep into the staves and then out again when the temperature drops at night. “Alabama’s climate — it gets stinking hot down here, so imagine that No. 1 barrel in August when it’s 120 degrees at the top of our building, so hot you can’t touch it. The spirits are oxidizing, and it’s going to create a geographically identifiable result.”

He also has great enthusiasm for the waterway that runs behind his distillery. “Big Escambia Creek is really interesting, very historical. We find Indian relics quite regularly, and there are juniper trees that produce berries we could eventually use in our distilling. It’s a natural spot for a distillery in terms of branding and marketing — very Alabama. Even the word ‘Escambia’ comes from an Indian word meaning ‘clear water.’”

But what about Dettling’s mysterious 3.5-acre distillery with no signage whatsoever, located on Goat Feathers Lane? It consists of two main buildings, one containing the still and various mixing vats, while the rickhouse holds the oak barrels with liquor undergoing the aging process. As someone who’s been there after a good hard rain, your faithful correspondent advises you to take a truck if you make the pilgrimage.

Dettling is a precise man, taking care with every aspect of the distilling process, but he hasn’t had time to turn his attention to tasting rooms or official Disney World-style tours of his admittedly remote headquarters.

“When people have shown up, we’re very accommodating, but the roads are poor. We have no signage and no public restroom at the plant, ” Dettling says. “Rome wasn’t built in a day. We’re just not (a tourist destination) — yet.”

Big Escambia Distillery CRU Rum is now available at local ABC stores. Find specialty cocktails with the smooth liquor on the menu at The Grand Hotel Marriott in Point Clear.