How often is fish on the menu at the Abruscato abode? “Not as often as you might think, ” says Bobby. “Because, as I always tell people, there’s two good ways to cook trout as far as I’m concerned — fried and fried.” He and wife Kim try to limit fatty foods, so they usually only eat the decadent delicacy once every couple of weeks. The Abruscatos share their signature way to prepare it, along with a couple tried-and-true options for other catches of the day. Serve them up with roasted veggies or a simple salad, and dinner is ready in a snap.

1. Pat the fillets dry and lay them out about 30 minutes prior to cooking. (For a small amount of fish, Bobby heats vegetable oil on a cast-iron skillet on the burner of their gas grill; for a larger amount, he prefers peanut oil and uses a propane cooker with a large fish fryer and basket.)
2. Pour in just enough oil to cover the fillets. Heat oil to 350 degrees. Meanwhile, in a large zip-top bag, mix together flour and yellow cornmeal. Shake fillets in the mixture, then tap each to remove excess.
3. Carefully drop each fillet in hot oil. Allow to fry until the fillet floats. Line a plate or baking sheet with paper towels or parchment paper. Remove fillets with a slotted spoon, allowing oil to drain off. Drain fish on towels or paper. While hot, season with Texas 1 Spice and a few drops of Tabasco. Serves 4.

Kim uses this clever technique to turn sheepshead fillets into “crabmeat, ” which is perfect for substituting in West Indies salad, gumbo and other crab-based recipes.

1. Tie up sheepshead fillets in cheesecloth. Place in a mixture of half chicken broth and half water seasoned with Zatarain’s crab boil that has been brought to a boil. (Use the same ratio of crab boil you would use to boil crabs.)
2. Boil fillets for approximately 5 – 7 minutes, then turn off the heat and let fillets steep in the hot broth mixture for about another 10 minutes. Remove fillets, let cool, then use a fork to flake fish to resemble crabmeat. 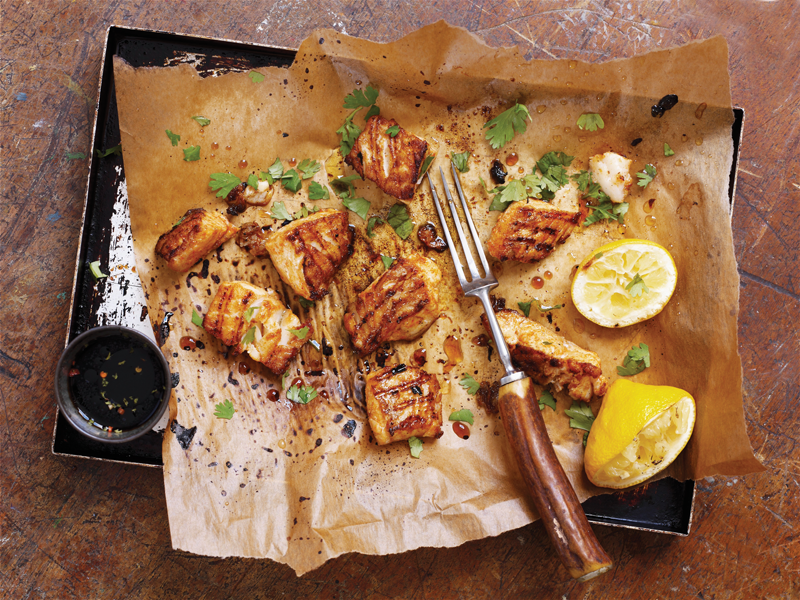 The avid fisherman likes to use his Big Green Egg for grilling. His wife’s fish baste adds sensational flavor.

1. About 1 hour before grilling, rub fillets with a little Texas 1 Spice Texpresso Rub and olive oil. Refrigerate.
2. Heat grill to 300 degrees. Grill fillets for approximately 10 minutes. Flip fillets over and baste the cooked side. Cook about another 10 minutes. Then turn and baste the other side, then let cook another 2 minutes. Serve warm. Serves 4.

1. In a bowl, mix together all ingredients until well combined. Makes approximately 2 3/4 cups.