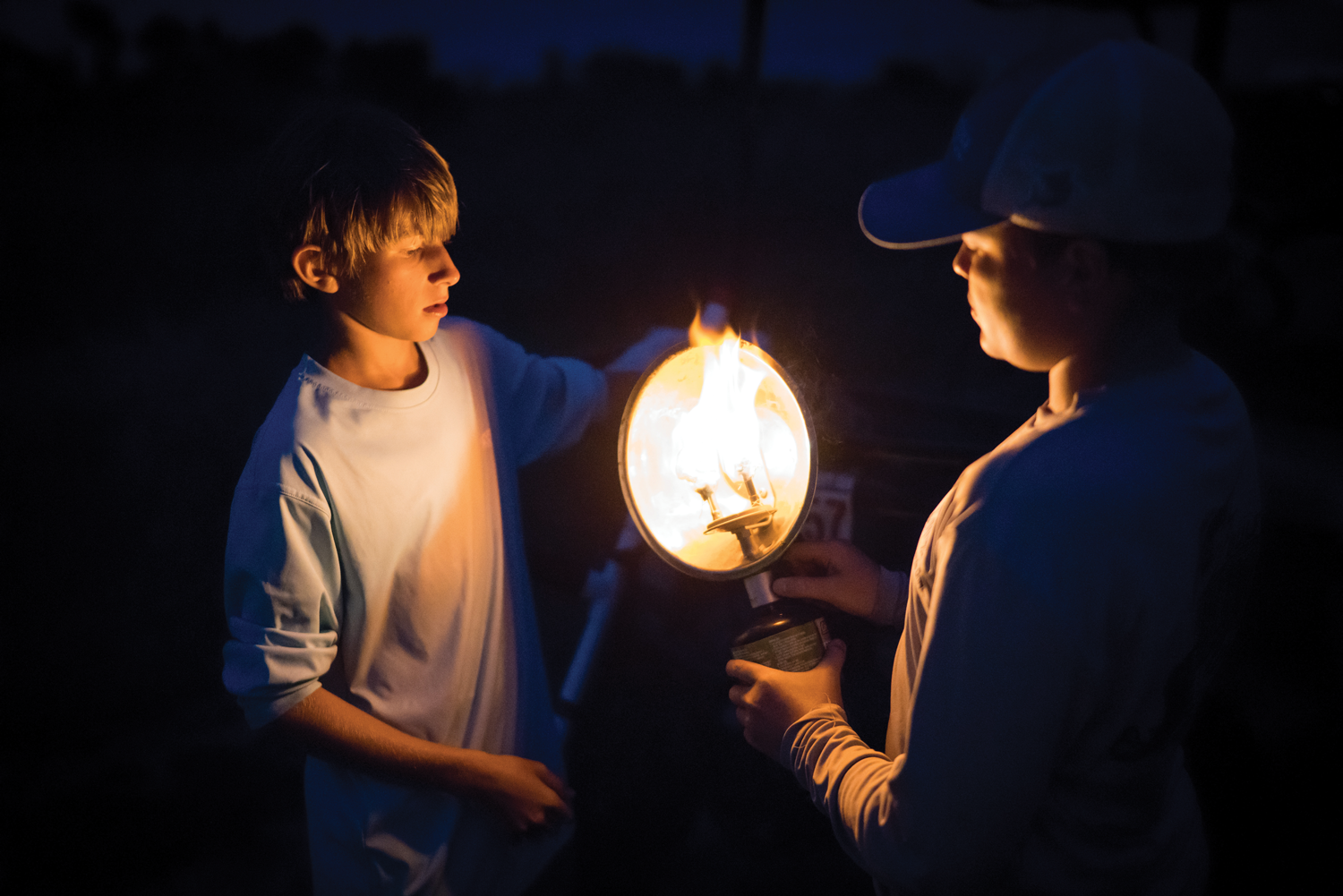 ABOVE Will Waechter, left, helps cousin Bo Carrington light a propane Coleman lantern in preparation for an attempt at flounder gigging on the Fort Morgan peninsula.

Bo Carrington holds the Coleman lantern as his cousin Will Waechter sparks it to life, the flaming propane illuminating Bo’s freckled, 13-year-old face. The sand fleas and gnats that assaulted this sandy cove on the Fort Morgan peninsula just an hour ago have largely settled down with the darkness, but the lantern’s light stirs many back into a frenzy.

Will, 12, works intently. Floundering, to him, is serious business. Bo, though no less businesslike, can’t seem to find a way to hide the gleeful glint in his eyes. The two Mobile youngsters have been gigging flounder longer than they can remember, which is to say they’ve got about a 10-year head start on this office-dwelling magazine writer.

Mercifully, the boys don’t treat me like a lost cause. While we had waited for the sun to go down, I asked a barrage of floundering questions.

“Have you ever gigged your own foot on accident?”

“Are there stingrays out here?”

“You ever been stung by one?”

Time to abandon the yes-or-no questions.

“How quiet do you have to be when you’re walking through the water?”

Bo pauses thoughtfully. “Well … are you gonna be asking us a lot of questions while we’re fishing?”

Once the two lanterns are lit, each boy politely offers to carry one, allowing me to tote a single-pronged gig. Without much ceremony, Bo and Will walk shin-deep into the warm water, and I follow behind.

Flounder are ambush feeders, settling on the Bay floor under a layer of sediment and waiting for a shrimp or bait fish to swim above. The flatfish are good hiders, and murky water doesn’t make the fisherman’s job any easier. Will says the trick is to look for the flounder’s eyes, which reflect the light of a lantern. If the fish’s faint outline indicates it’s of legal size (at least 12 inches long), the fisherman will slowly lower his gig into the water before making the quick, fatal jab.

Perhaps the best thing about floundering is that it squeezes every ounce of your focus into an area of a few feet, and within your small pool of lantern light, the outside world ceases to exist. But around your toes, another world reveals itself. Crabs of every size prance left, right and center. Minnows dart behind rocks. Will plunges his hand into the water and comes up with a needlefish in his fist. 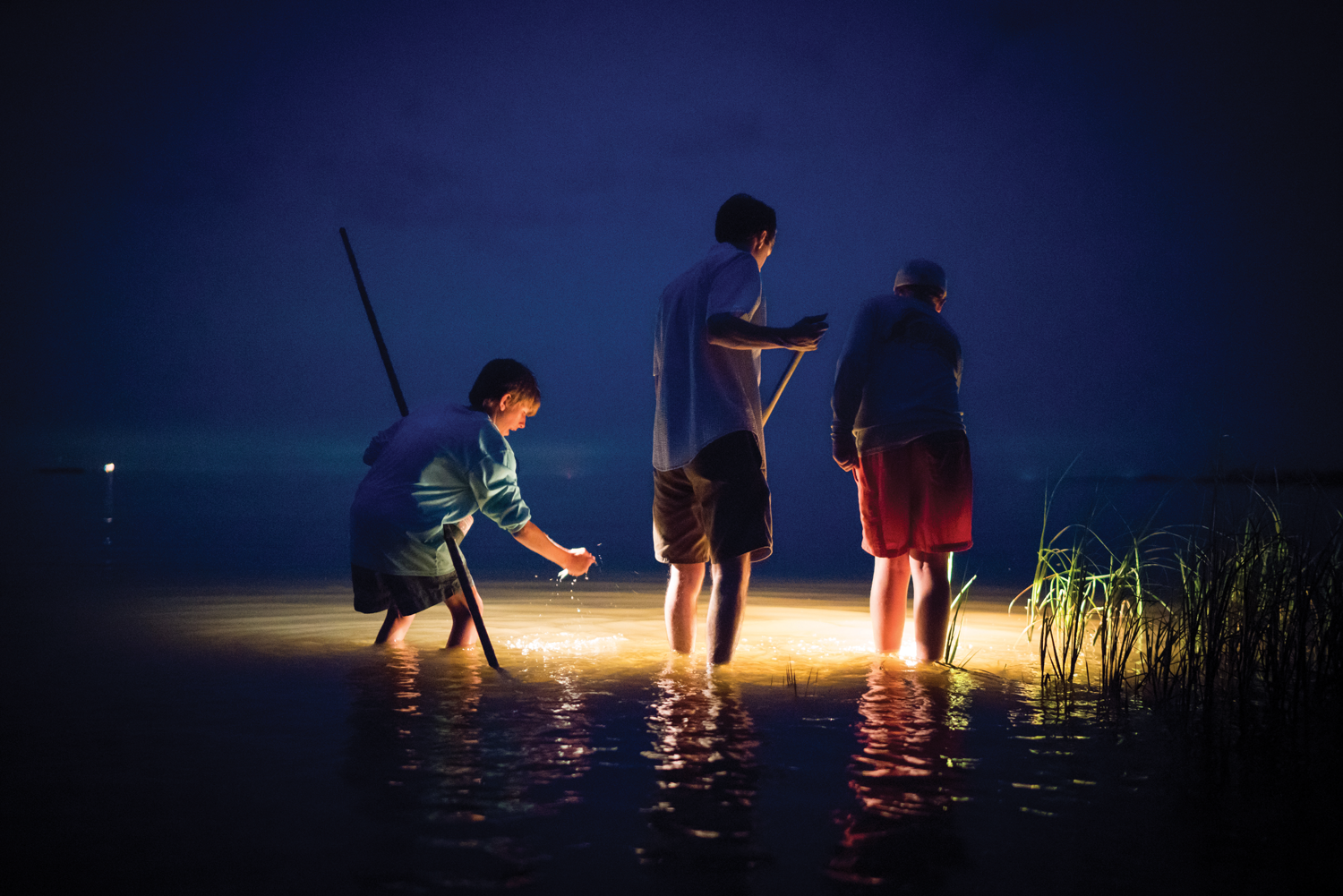 Our group stalks the shoreline, forced to stay in the shallows on account of the foggy water. “There’s a flounder bed, ” Bo says, holding a lantern over an oval depression in the sand. “This is where a flounder buried himself earlier, but it’s gone now.”

The shallow cove is a graveyard of flounder beds, but as of yet, there are no flatfish to be seen. “You either see a lot of flounder or you don’t see any at all, ” Will says. It’s quickly becoming clear which kind of outing tonight will be.

But for the two cousins, the night is anything but a failure. In fact, floundering almost takes a backseat as the boys explore the Bay’s teeming nightlife. Will fetches the underwater light he got for Christmas. Some fishermen prefer this contraption, as it doesn’t reflect the ripples on the water’s surface like an above-water lantern. Will walks ahead with his light and thinks aloud.

“They call really big flounder ‘door-mats, ’” he says. “I’m not really sure why.”

Bo carries a long, five-pronged gig that once belonged to the boys’ grandfather. The weathered spear is a symbol — of family tradition, of long nights in warm, shallow waters, of flounder gigged and left ungigged.

“But y’all still had fun, right?” I ask the boys as they extinguish their lights. 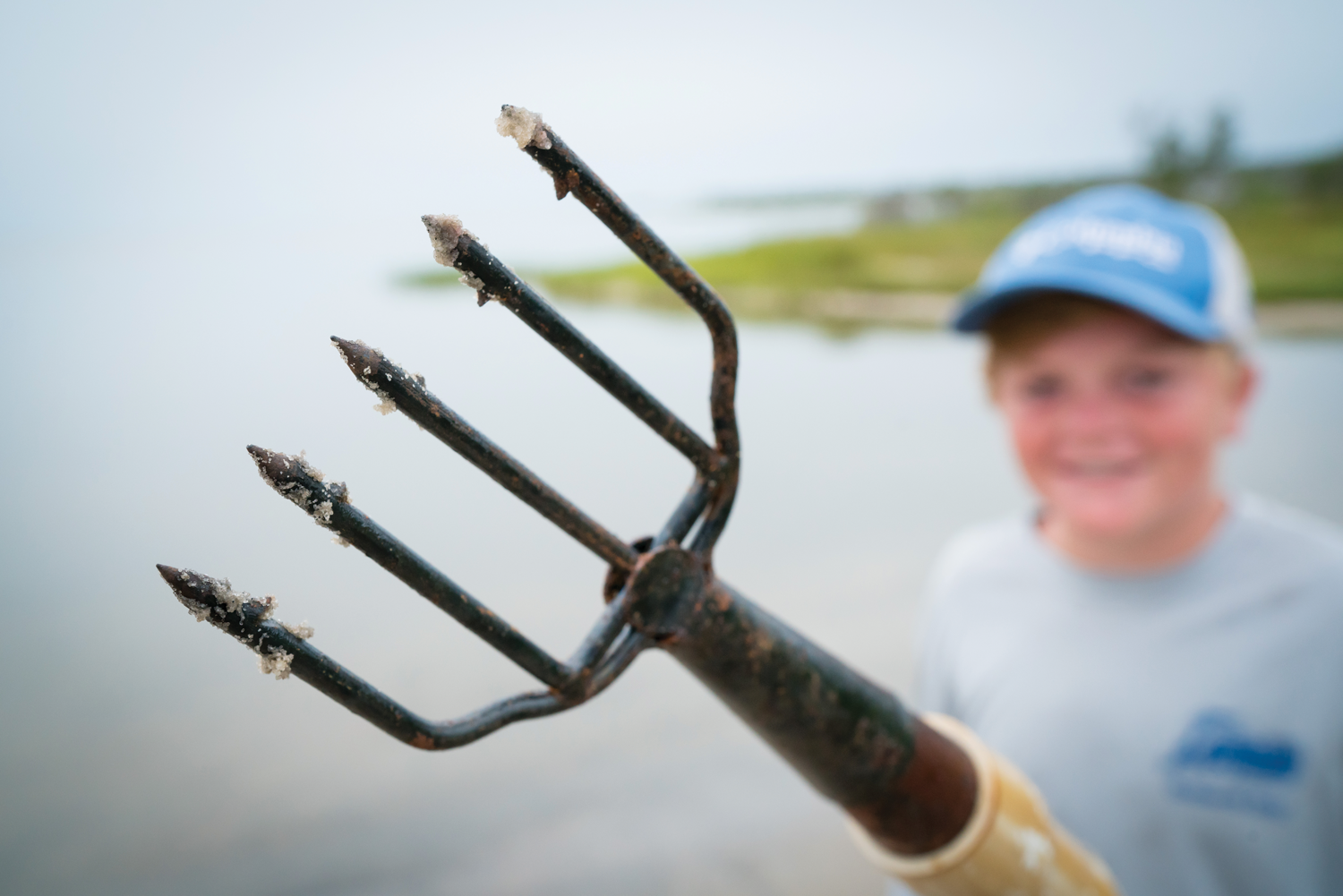 ABOVE Bo Carrington presents the aged gig head that once belonged to Trip Palmer, the cousins’ grandfather.

What you Need to Know

Photos by Meggan and Jeff Haller