“My plan is to build the coolest brewery I’ve ever seen, ” Keith Sherrill says, his voice echoing throughout an empty warehouse on Monroe Street. To the untrained eye, it’s a dark, forgotten space, where walls of exposed brick support a soaring metal ceiling. But to Sherrill, it’s the first real step in the manifestation of his hopped-up brainchild: Haint Blue Brewing Co.

He points out where the tap room will sit, describes the green space he wants to create alongside the outdoor seating and talks about his vision to make the brewery a community space, where Mobilians can come for yoga, live blues music or wedding receptions.

Standing beside an enormous swinging door where ice trucks with Mobile’s legendary Crystal Ice Company once loaded up, Sherrill points east towards the RSA Tower, which peeks out over a live oak tree growing inside the walls of the Church Street Graveyard. “It’s a great snapshot of Mobile, ” he says. “I mean, you’ve got the RSA tower, a 200-year-old oak and then this historical cemetery just feet away.”

And boy is he right. For an upstart brewery searching for the soul of its city and aiming to become “Mobile’s porch beer, ” Sherrill couldn’t have found a better location if he prayed to Joe Cain himself.

At the end of a 14-year stint in the army, including numerous tours in Iraq and Afghanistan, Sherrill (a Montgomery native) found himself stationed as a helicopter pilot in a suburb of Seattle.

“A lot of coworkers at that time were from that part of the country — Oregon, California and Washington. Arguably the beer capital of America. They all homebrewed, and it was the coolest thing I’d ever seen. They’d tell me they were staying in on a Saturday night to homebrew and I’d ask, ‘What are you doing? Making beer? At your house? Can I show up early? What do I bring? Grain?’”

Sherrill quickly picked up home brewing and fell in love with the process. “I started growing hops in my yard.” The town where he lived is actually considered one of the best places for growing hops in the entire country, and the fast-growing ivy slowly took over Sherrill’s yard, climbing up his gutters and making his entire backyard smell like beer. So between his knowledgeable friends, the prevalent beer culture and fertile soil for growing hops, Sherrill had inadvertently found a beer paradise.

“Honestly, it was like ‘beer made easy, ’” he says. “Then comes a time when I’m about to get out of the army, and I’m trying to decide what I’m going to do next. I’d always been in love with the idea of opening my own business.”

Sherrill didn’t have to look far — the answer was growing in his yard.

“Complete the objective. Keep my team safe. Come back alive. Don’t crash a helicopter. I did that for 14 years. Now, I just want to make good beer.” – Keith Sherrill 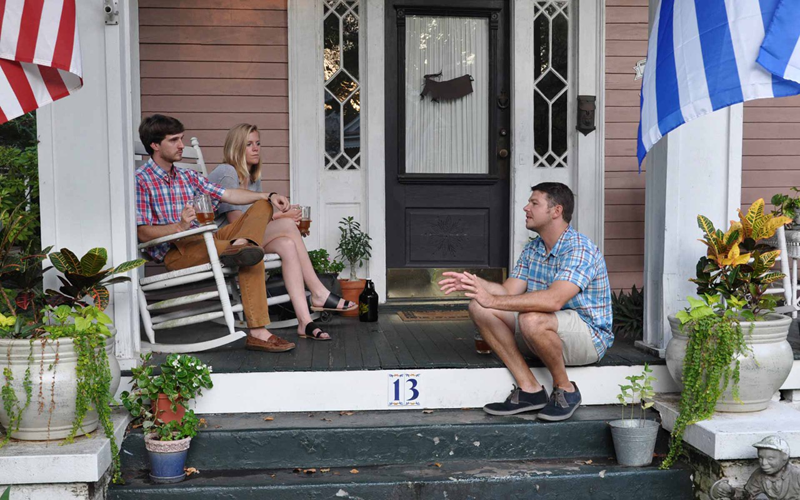 Homesick for the South, Sherrill eventually decided to move to Mobile, where his wife has a lot of family. “Mobile is quite honestly the coolest city in the state of Alabama, ” he says. “By far. I’m so bummed I didn’t grow up here.”

With the brewery still in the back of his mind, Sherrill did a little research and was shocked at what he found. “There’s not a brewery in Mobile!” he says. “And as that idea grew and grew I realized it was the first time in a while that I was really excited about something.”

The idea for the brewery’s name and concept as Mobile’s porch-drinking beer (notice the rocking chair in the logo) grew out of Sherrill’s search for a house in Midtown. “We noticed the haint blue porch ceilings on all of these old houses, and my wife mentioned a few of the stories behind that tradition. We did a little research and found that painting the ceiling of your porch blue is a common tradition in the gem cities of the South — Savannah, Charleston, New Orleans and up the Eastern Seaboard. But they’re not always the same shade. All these places have somewhat different hues.”

After realizing that many of Mobile’s historical homes have similar blue porch ceilings, Sherrill suddenly had a name for his brewery: Haint Blue Brewing Co.

With a name like Haint Blue, the concept for the brewery eventually evolved into a place that makes the ultimate porch-drinking beer. “Kind of like how Corona owns the beach; it’s the beach beer. We want to be the porch beer.” 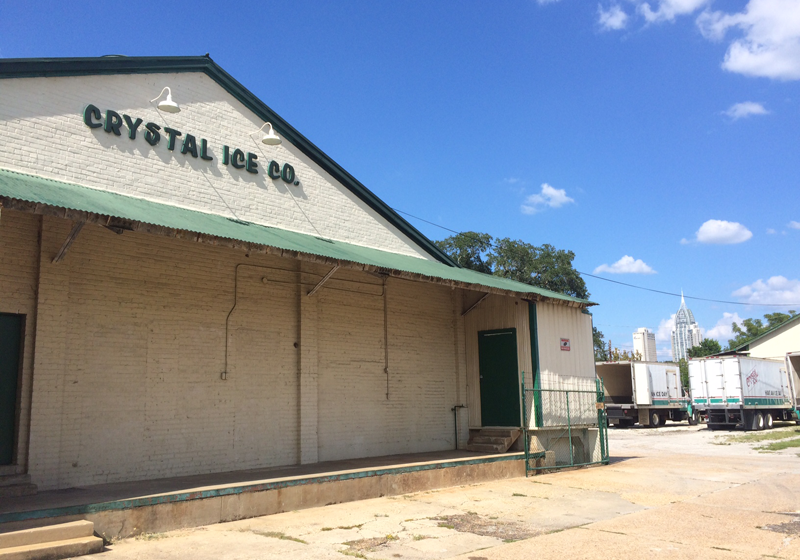 Sherrill first found the Crystal Ice warehouse online when he was still living in Washington. “It had been on the market for a year when I first saw it, and I just knew it was going to disappear from under me.”

The day after Sherrill and his wife pulled into Mobile, he visited with the owners of Crystal Ice and eventually secured a lease. He couldn’t believe his luck.

Mobile’s historic ice house first moved to this location on Monroe Street in 1901, pulling water from a well that still exists to form enormous ice blocks in the ground that were then delivered to local residents and businesses. When the ice-making process changed, the warehouse that Sherrill now occupies fell into disuse — and Sherrill’s lap. Crystal Ice still operates in two adjacent buildings.

When the added significance of Sherrill’s new location became apparent, it was almost too much for him to handle.

“There are a few reasons for the haint blue tradition. Some Southerners believed it kept bugs off the porch and, actually, early ingredients in the paint did in fact act as a pesticide. Then I find that there’s also spiritual connotations. ‘Haint’ is actually another word for ‘haunt.’”

It was believed that bad spirits were afraid of water, hence the blue paint. “So people would paint any entry to their home blue, not just the ceiling. It could be the trim, the doors, the shutters — any way to keep the bad spirits out.

“This building borders the Church Street Graveyard!” Sherrill says, like a well delivered punch line. “Joe Cain — the father of Mardi Gras; Eugene Walter — Mobile’s Renaissance man. They’re both buried right over that wall. I mean, you can’t get any better than this! Now I’m losing sleep, I’m so excited.”

The thing that really makes Sherrill tick is his desire to retain the authenticity of both Mobile and the Crystal Ice Company. When you visit his brewery, he wants you to know where you are and the history of this particular spot. He already has historical photos of horse-drawn Crystal Ice trucks to hang around the place, and he plans to make good use of the Crystal Ice Co. sign that still hangs out front. Best of all, the beer he brews will be made from water pulled from the Crystal Ice well, the same well that has refreshed heat-exhausted Mobilians for most of the 20th century. He’s already sent a water sample out to Nebraska to test that it has the correct chemical makeup to convert sugars into beer, and the results are in. Drink up.

“Nothing’s on accident here, ” Sherrill explains. “We want to do it right. Everything is on purpose and well thought out, because we want you to know where you are. That’s wildly important to us.” 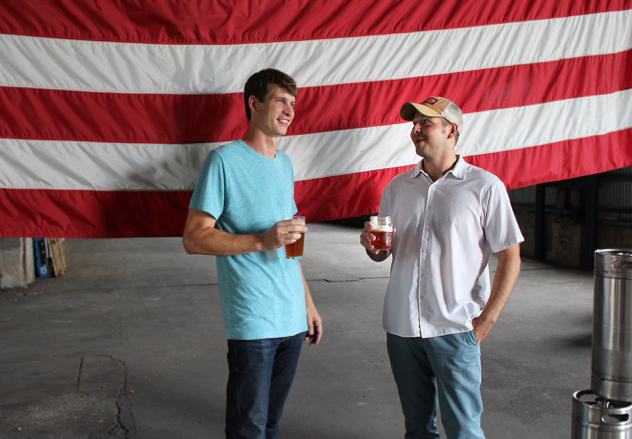 On September 21, Haint Blue Brewing Company launched its Wefunder campaign which allows individuals to invest in a private company.

“It’s regulation crowd funding, and in May of this year it became legal for the first time in 80 years, ” Sherrill explains. “I have a ridiculous amount of money in this place, more than I’ve ever spent on any one thing, but we need some help, so that’s why we’re doing Wefunder. And what better way to see a product-market fit than by saying, ‘Hey, if you want my product, you’re gonna have to help me get it to you.’”

If all goes well, Sherrill hopes to purchase remaining equipment, begin construction and have his doors open by Mardi Gras 2017.

Standing inside the old Crystal Ice warehouse, a third-generation company, Sherrill thinks about the future of his own budding enterprise. “If we can reach our goal on Wefunder and get this thing off the ground, there’s no reason why we won’t be here for 3 or 4 generations, too.” And he means it.