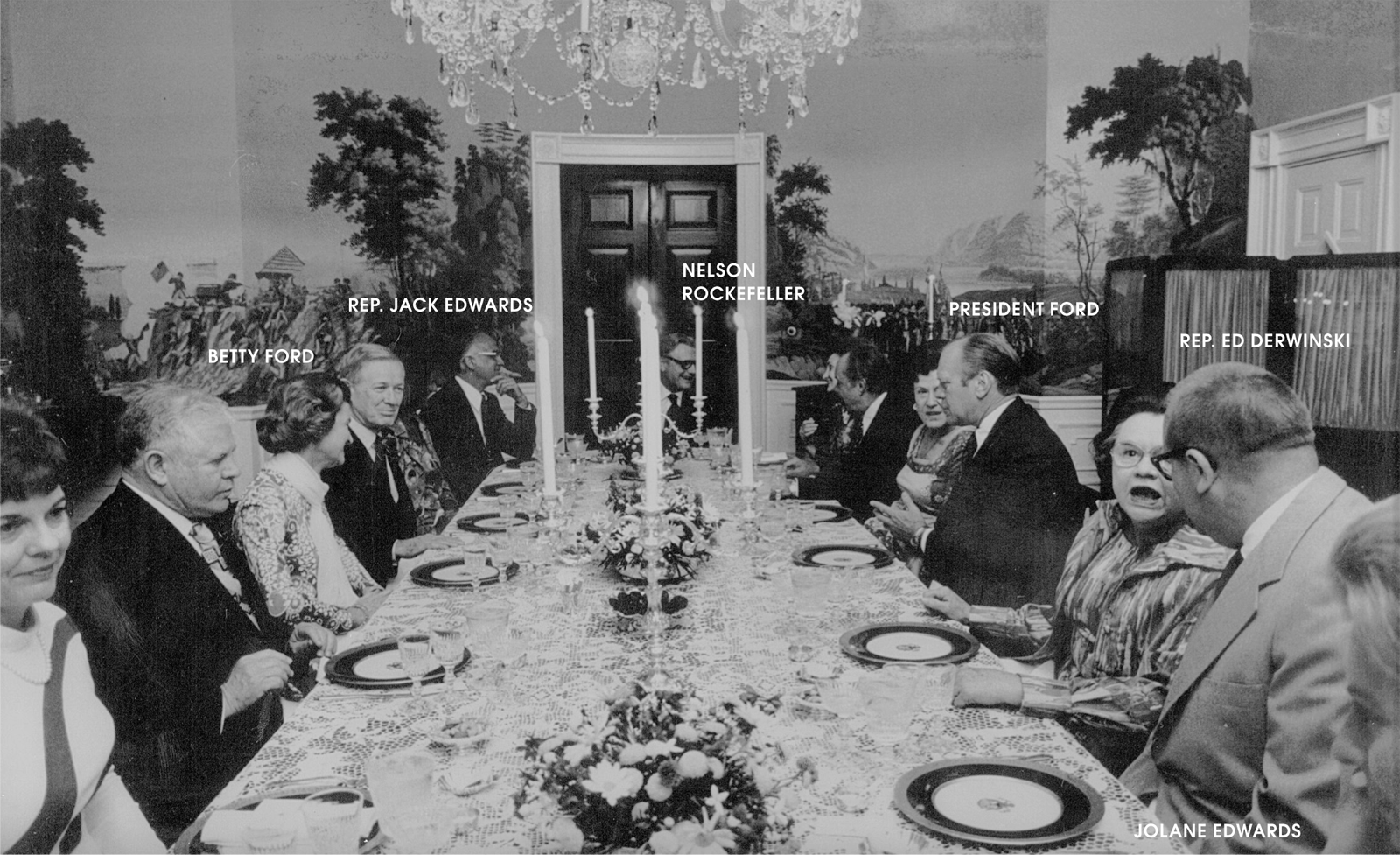 ABOVE At this White House dinner hosted by Betty and Gerald Ford, Jolane’s jewelry mishap gave the Secret Service quite a scare.

During my time in the House of Representatives, it was typical for members of Congress to bring their spouses to live with them in Washington while they served. After arriving in D.C. in 1965, my wife Jolane and I bought a house in Bethesda, Maryland, right outside of the District, and we sent our children to school up there. So it was really a family affair.

There must have been about 25 congressional families living within half a mile of our home in Bethesda — both democrats and republicans. We all got along and we all talked with one another, no matter the party, although sometimes it did make for  awkward situations. I remember one day standing on the House floor chewing out some democrat and raising Cain with him about something only to go home and have Jolane say, “Oh, by the way, we’re having dinner with them.”

But I will say that bringing spouses to Washington was a major key to all of us politicians getting along. These days, congressional spouses rarely make that move for the simple reason that homes in D.C. and the surrounding area are just too expensive. Unless a member of Congress has independent income, most can’t afford to buy a home up there on a congressional salary.

Jolane being with me during my 20 years in Congress certainly led to us establishing some lasting relationships. When Barbara and George H.W. Bush came to Congress in 1967, Jolane was assigned to be Barbara’s big sister. Back then when a new congressional spouse arrived, they were paired with a current spouse who would take them by the hand, advise them and help them find a home to either rent or buy. There might still be some of that going on today, but I certainly don’t think it’s anything like it once was.

We were especially close to Betty and Gerald Ford. I served with Ford in the House of Representatives for eight years. In fact, the first vote I cast in Congress was to choose the Republican leader of the House. Ford won that vote, so he became my leader and friend immediately. He flew down to Mobile to make a speech for me during that time, knowing that he wouldn’t get back to Washington until 4 a.m. and had to be at work the next morning. He was willing to do things like that, and I think that says a lot about a person. In August of 1974, after Nixon had resigned the presidency and boarded a helicopter on the South Lawn, Jolane and I were at the White House to witness Ford’s swearing in as the 38th president of the United States and to hear him declare, “Our long national nightmare is over.”

One of my favorite stories unfolded shortly thereafter, during a small dinner hosted by Betty and Jerry at the White House. We shared the table with other congressional couples, as well as with Nelson Rockefeller who, at that time, had been named Ford’s vice president but was yet to be confirmed by Congress. (Remember, this was all during the reshuffling after Nixon’s resignation.)

In the middle of dinner, during a quiet moment when it seemed that everyone at the table was taking a breath, Jolane’s big earring decided at that instant to slip off her ear and clang onto the china. In a flash, a Secret Service agent flung open the door at the end of the room to check that the president was OK. When the matter was settled, Ford looked down the table and said, “Jolane, I sure hope that earring was pure gold.” The next day, Jolane went and got her ears pierced.

I was also lucky to have Jolane accompany me on several state visits across the world, many of which we remember fondly. When President Jimmy Carter sent the first small congressional delegation to China, I was given the honor of being included in that group. Jolane was supposed to join me, but a week before we were to go, President Carter decided his son Chip would go as well. Since that required three extra Secret Service members to go with Chip, there was no room on the plane for our wives. This didn’t sit well with Jolane, so the night before I was to fly to China, while I was asleep, she filled my suitcase to the brim with chocolate Easter eggs wrapped in foil, as the trip would fall over the Easter holiday. So I got into Beijing and opened my suitcase, and these damn Easter eggs fell out everywhere.

Now, Jimmy Carter’s administration was casual by his own desire, so it should have been no surprise that Chip wore blue jeans the whole time he was in China. Well, we went to the state dinner with the Chinese leaders, and Chip showed up in his blue jeans along with his three Secret Service agents in their blue jeans (because they were required to dress like him). The Chinese leaders assumed the president’s son was the leader of our delegation, and they didn’t know what to make of the casual attire. Thinking fast, I returned to my room, grabbed my Easter eggs and put one at each place setting. By doing so, the subject was changed from Chip’s blue jeans to the significance of the eggs, new birth and the meaning of Easter — in communist China!

Jolane loves that story, although I think she still would have preferred to have gone on the trip. She did get to join me on four subsequent visits to the country, back in the days of “early” China. I remember visiting the country one January and staying in a hotel that had no heating whatsoever. They had just opened the old hotel to give us a place to stay. There were twin beds in our room, so Jolane and I ended up taking all the covers off of one bed and putting them on the other, and we shared that one twin bed. The dining room had no heat either, so we all wore our topcoats to dinner.

In summary, I can’t imagine those 20 years in Washington without Jolane, and I’m very fortunate she took to D.C. life so well. We’ve been married for 64 years now if you can believe it — I think it’s going to last.