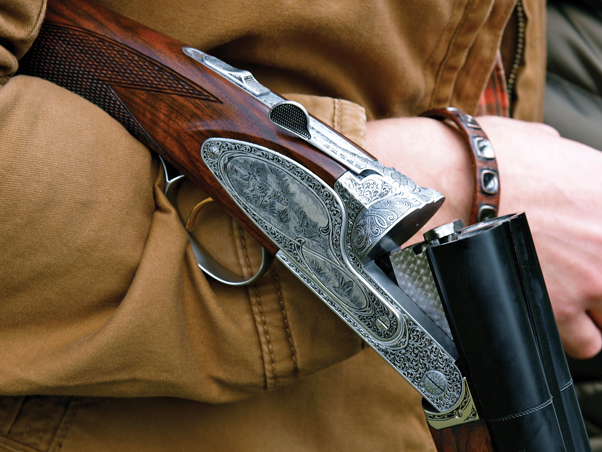 The feeling of wanting to be in the Mobile Delta swept over me in the most unexpected place and time. It was last June on a girls’ night out with my friends, Alina and Frida, at the trendy Momo restaurant just steps from London’s Piccadilly Circle. I saw myself going down a sandy road through the longleaf forests on the Tensaw River with my husband Howell and our two German shorthair pointers.

If there was one thought I never expected to pass through my mind while dining with my two sophisticated friends, it was, “I miss quail season.” It was not a reflection on their company; it was the pigeon pastilla that did it. I said to myself, “How good would this be with bobwhite?” And that was that.

Even months after that dinner, the feeling stayed with me, and now it gives me such pleasure that hunting season — with its crystalline days and Pokey and Clara coursing through sedge and longleafs — has finally arrived. I have evolved from a passive hunting companion whose pleasure was in handling the bird dogs into, well, a hunter.

Like any evolution, it was gradual. Growing up in Poland, I was exposed to hunting early, but mostly in the periphery — watching my father getting into his high boots or cleaning his drilling gun before stowing it in a safe; helping my mother clean ducks and pheasants; hearing friends praise her festive table and magnificent game dinners; picking cockle burrs out of our field spaniel’s ears. But I never went on a hunting trip as a youngster. Plucking the wild ducks and pheasants of their magnificent plumage was about all I could handle. After all, they looked like domestic poultry and were my guilty favorites to eat.

I did learn to handle guns early — on a lazy afternoon at the tender age of 11. Without consulting my parents, I signed up for shooting classes at a local sports club. “What’s with you and violent sports?” inquired my mother, who relaxed after ascertaining that it was a school-sanctioned extracurricular activity. It was a good question, to which I had no real answer other than I liked the precision of target shooting. The same may be said about fencing (precision and hand-eye coordination), which I also signed up for at school sans parental consultation, and fishing, which I took up much later in life when the issue of parental consent was moot.

Now it is clear that all my sports were individualistic pursuits, requiring a combination of precision, coordination, speed, grace and patience, and since none of them are generally considered first choice for a girl, were somewhat nonconformist.

So hunting was a natural progression; however, for years I refused to embrace it and cast myself as a reluctant participant, trying to block the actual shooting by focusing on our talented bird dogs and the beautiful surroundings. And the surroundings were beautiful. I accompanied Howell on hunts in the plains of Poland for pheasant, verdant woods of Maine for grouse, rolling hills of golden wheat dotted with green hedges in Saskatchewan, Canada, for Hungarian partridge, and at piney woods near Stockton for Southern bobwhites. And though I carried a gun on all those trips (and even fired it on occasion), the birds were completely safe from me.

If I were to pinpoint the moment when I started to care about actually hitting the target, it was on a trip to Montana about five years ago. It happened on public hunting grounds near West Yellowstone. A grouse presented itself in a perfect arch and flew right to left. Without hesitation, I traced it with my gun and fired two shots. The bird continued to fly, and I stood in complete disbelief that I had missed.

But it was not until two years later at a plantation near Tallahassee, Florida, when the full transformation took hold. One January weekend, my husband was invited by his friend, Guy de la Valdene, for a quail hunt on Guy’s picturesque grounds, and I was allowed to tag along. What preceded the hunt was one of those magical evenings when all your senses come alive — engaging conversation, a sumptuously set table adorned with beautifully arranged flowers, copious amounts of good wine shared with friends over Guy’s gourmet meal, surrounded by bird dogs in a real chef’s kitchen with a fire crackling. I was in heaven.

As the conversation was winding down, I queried Guy, a writer and quail hunter of considerable renown, about his favorite quail recipes. After a quick demonstration of a tender touch needed to pluck a quail (a perfectly cooked quail requires skin on), Guy said wistfully that much to his surprise, his thirst for hunting the quail was waning. Howell joined in sharing Guy’s sorrow over taking a life of such elegant creatures. Oh, how I understood completely. In the times past, I would have identified with it. But, as I stood there quietly and swirled my wine glass, I realized the hunting baton had been passed. I was ready to turn the dogs over to my husband and shoot the quail that would later grace my kitchen.

This is based on Momo’s Pigeon Pastilla recipe. I find quail to be a superior substitute.

1. In a bowl, combine 3 tablespoons kosher salt, 3 tablespoons sugar, water and red pepper flakes. Place quail in the bowl and allow to brine overnight or for at least 6 hours in the refrigerator.
2. Preheat oven to 350 degrees. In a large saucepan, heat oil and butter. Pat quail dry with paper towel. Add quail and onion. Cook on medium for about 15 minutes until softened and golden brown. Add 1 teaspoon salt, ginger, 1 tablespoon cinnamon, pepper, coriander and parsley, and lower the heat. Cover and allow to simmer for 45 minutes.
3. Remove quail and allow to cool. Separate meat from the bone and reserve. Add saffron and 1/4 cup sugar to liquid. Reduce sauce until it thickens.
4. Break 6 eggs into a bowl, beat thoroughly, then add to sauce, stirring constantly until eggs are scrambled and set.
5. Roll out brick pastry sheet. In the middle, place egg and onion mixture. Top with quail meat and slivered almonds. Brush edges with yolk from the remaining egg. Fold brick pastry around the stuffing to form a pie-like shape and seal it with the egg.
6. Place on a parchment-lined baking sheet. Bake until golden and crispy. Remove from oven, allow to cool slightly. Sprinkle top with confectioners’ sugar, then cinnamon. Garnish with mint. Serve immediately. Serves 6 (or 3 very hungry diners)

This recipe is for cooking in a tagine, but a Dutch oven will work as well. I learned it on my last trip to London from my chef friend Alina. Serve it with couscous or quinoa.

1. In a bowl, combine kosher salt, sugar, water and red pepper flakes. Place quail in the bowl and allow to brine overnight or for at least 6 hours in the refrigerator.
2. Heat the olive oil in a flame-proof tagine bottom. Remove quail from the brine. Pat dry with paper towels. Season quail with salt and pepper and brown in oil in batches – about 4 minutes per side. Remove, place in a bowl and set aside.
3. Add the onions with a pinch of salt to the tagine bottom and sauté until soft and caramelized, about 8 – 10 minutes. Add pomegranate molasses and agave syrup and sauté for a few more minutes.
4. Return browned quail to the tagine and fill the bottom of the tagine with 1 cup of hot water. Cover and simmer on low heat for 30 – 35 minutes. Check and adjust the seasoning – if the molasses are very tart you may need a bit more agave syrup to balance it.
5. Remove from the heat, add pecans. Let it sit for about 5 minutes. Garnish with fresh parsley before serving. Serves 6 – 8. 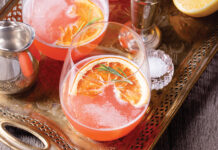