Big, colorful and visible from blocks away, simple cut-metal markers designate Mobile’s most historic and beautifully restored properties. From downtown Dauphin Street to Georgia Avenue, Government Street, Dexter Avenue, Fearnway and Macy Place, hundreds of them are peppered throughout the city’s historic districts, as well as at select properties in smaller communities such as Dauphin Island and Citronelle. Officially known as banners and shields, the markers are awarded by the Mobile Historic Development Commission (MHDC) twice annually, in June and December. Each shield is emblazoned with the six flags that have flown over the city — Bourbon French, British, Spanish, Republic of Alabama, Confederate and American — while the ribbon-like banner positioned above it features the original and current owners’ names and the construction date. If local realtors are to be believed, a banner and shield on a house adds $10, 000 to the property value — about the same as having a live oak tree in the front yard. 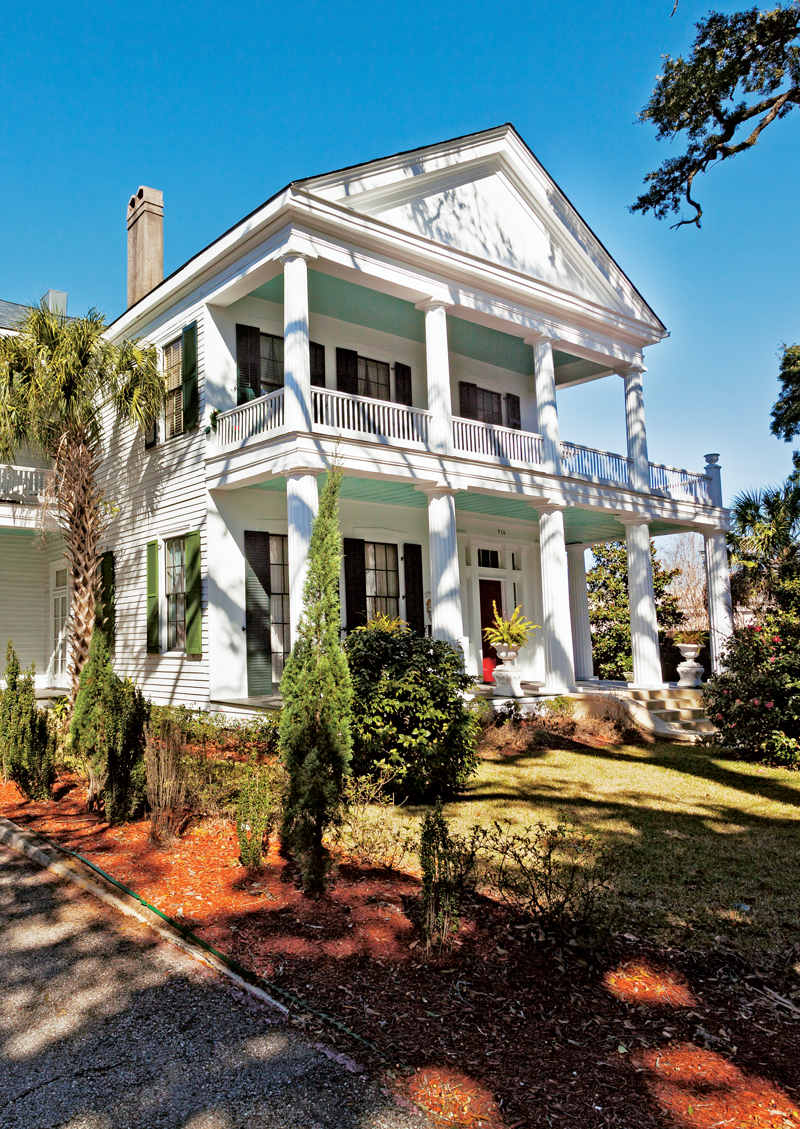 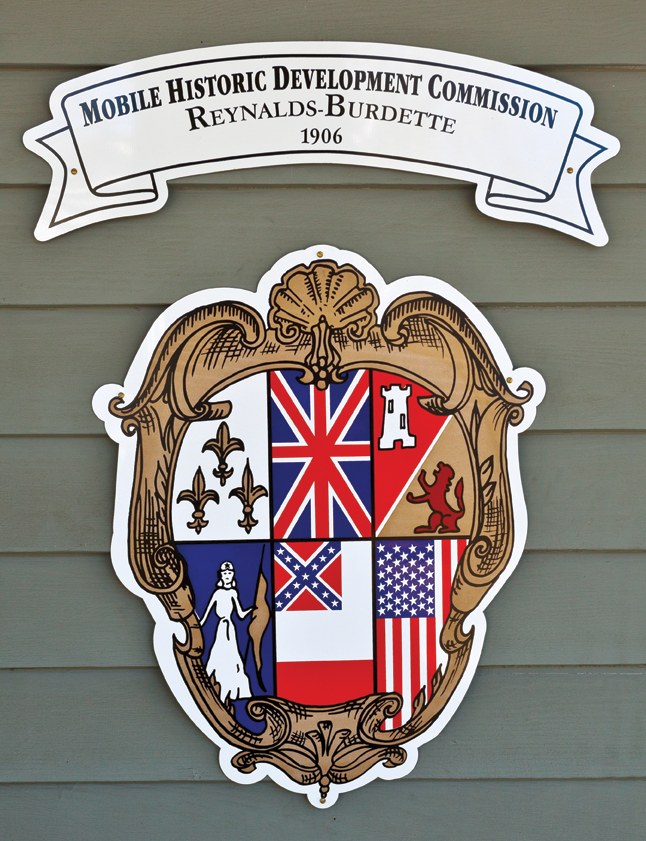 ABOVE LEFT Government Street dame, the Roberts-Taylor-Isbell house, circa 1837, features majestic white columns and sweeping wraparound porches. It is also listed on the National Register of Historic Places.

ABOVE RIGHT The historic marker emblem is a marriage of all of the flags that have flown over our fair city.

How to Procure One

So who get can get a banner and shield, and how does one go about it? The program has evolved over its 50-plus year history. There are now well-established guidelines and procedures, a far cry from the early days when volunteers rode around in a pickup and handed out Masonite versions to any owner of an old house who would take one. The object then was to alert residents and the broader public to Mobile’s historic treasures so that no more would be lost to the wrecking ball. Whether or not the house had a fresh coat of paint didn’t matter. Today that’s no longer the case, thanks to several generations of conscientious and preservation-minded homeowners, as well as a vigilant Architectural Review Board (ARB), which has purview over exterior changes to buildings in the districts.

The MHDC now has a standing Banner and Shield Committee that takes applications throughout the year, though the deadline for a June marking is March 1, and for a December marking, Sept. 1. There is a $125 nonrefundable application fee — $75 for the banner and $75 for the shield. When a house that has previously received a banner and shield sells, the new owners usually apply for a replacement banner with their last name, and the existing shield stays in place. The MHDC treats these name changes like a new application, but the charge drops to $75 to cover the replacement banner.

Citizens often ask if any building in one of Mobile’s 13 National Register historic districts qualifies for marking with a banner and shield, and the answer is no. Only seven districts have a special local designation that places them under ARB protection — Church Street East, De Tonti Square, Lower Dauphin Street, Oakleigh, Leinkauf, Old Dauphin Way and Ashland Place. The MHDC has long felt that without ARB oversight, there would be no way to forestall unsympathetic changes to marked properties, such as vinyl siding or metal windows. Of the thousands of buildings within the eligible districts, only those over 75 years of age potentially qualify. And even those must retain their original character and be in a restored condition. The marking criteria are involved, including numerous terms and concepts unfamiliar to many lay people. For example, under the criteria for “porch, ” applicants are informed: “The porch is an important aspect of Mobile’s vernacular architectural tradition and must retain its original configuration, height and details. A screened or infilled porch may be acceptable providing the original details of the porch can be read and the new materials are appropriate.” Owners who are uncertain whether they should gamble the nonrefundable application fee can call the MHDC offices for an informed opinion. The MHDC staff will also research whether the age of a house qualifies it.

Once an application is taken, the building is photographed and reviewed by the Banner and Shield Committee, which then alerts the applicant to any maintenance that might be required to meet the criteria, such as repairing a broken shutter or touching up some flaking paint. These changes must be approved beforehand by the ARB, and the MHDC staff assists applicants with that process. If unable to address the committee’s concerns prior to the deadline for the award ceremony, applicants get one free rollover into the next cycle. Once the home is selected, any future exterior changes or restorations made on their property are still subject to ARB regulations and review in order to keep the award.

There have been a few growing pains during the program’s long history, but the end results speak for themselves. MHDC usually holds its presentation ceremony in one of the properties to be marked, with members of the commission, marker recipients and guests, including public officials and media, in attendance. House-proud Mobilians get to show off tangible and handsome recognition of their work, taking pride in a job well done. If getting a banner and shield were easier, its practical benefits would be much diminished. The program means that the historic property owner has achieved a high level of excellence, worthy of recognition and celebration. And the increased property value doesn’t hurt either!

John S. Sledge is an architectural historian with the Mobile Historic Development Commission.