Most people would guess that Lawrence Stauter was the first successful recreational boat builder in Mobile. It’s a reasonable assumption, but the truth is, as Stauter was beginning his fledgling business on the Mobile Causeway in 1946, there was another noteworthy career winding down. Norman Altice established Altice Marine Ways on the Mobile River after the first World War, constructing pleasure cruisers and recreational fishing boats for a mostly local clientele. His boats were beautiful and competed for buyers alongside nationally known manufacturers such as Hacker-Craft, Chris-Craft and Gar Wood. Unfortunately, most of his boats have succumbed to the ravages of time, and lost along with them was the memory of the man who built them.

Resting against an old ramshackle fish camp on the Escatawpa River is one of the last remaining boats built by Altice. In this case, the boat is known as a “dragover” skiff because it was constructed light enough for the fisherman to drag it from the river into nearby oxbow lakes where the larger fish lay. If it weren’t for this rare survivor, I may have never discovered the story of Altice boats. David Bagwell, a retired judge and noted local historian, had restored the skiff back in the 1970s and regaled me with stories of the camp from its early years. It was because of his talent as a storyteller that the name of the man who built the boat stuck with me.

A few years after first hearing of the Escatawpa River skiff, friend and preservationist Chan Flowers called to tell me of his latest acquisition … a 13-foot flat bottom “duck” skiff built in the 1930s. It was constructed of solid cypress — cross planked on the bottom — with double bench seats, mahogany gunwales and its original hardware. He had purchased the boat from the McPhillips family who kept the boat at their Alabama River camp. One of the stories passed along with the boat was that, when the family left for the season, they would tie the boat to a tree near camp and sink it to prevent its loss to high water or theft. Still sound as the day it was built, it was another Altice skiff.

With two solid references, my interest was piqued, and I began to do a little research, hoping to shed more light on the man and his craft. Through a bit of luck, I was able to contact his granddaughter who shared an old photo of Altice in one of his large “gulf” cabin cruisers, proudly displaying a tarpon caught in Mobile Bay. The photo captures a bygone era reminiscent of the sepia-toned sporting images of Zane Grey or Ernest Hemingway.

Like the waters we fish, the story is murky. Born in 1896, Altice was the grandson of Martin Horst, a successful businessman and Reconstruction-era mayor of Mobile. It is possibly through this family connection that he managed to establish his boat-building business, Altice Marine Ways, on the industrial canal near Three Mile Creek. No doubt experiencing success with the growing leisure class of the 1920s, he added a showroom on Washington Avenue in what was a prime location just south of the Oakdale Community.

A 1934 article in the Southern Democrat gave credit to Altice Marine Ways for constructing the best yachts and pleasure cruisers in Mobile waters. His talent is evident in the plan view of a 16-foot runabout advertised in the 1930 issue of the Buccaneer Breeze magazine. In addition to his skills as a craftsman, Altice also had a positive influence on the younger generation of boat builders. According to Eddie Negus, his father Rone Negus first learned the craft while working for Altice before setting off on his own successful career building Negus Boats.

Altice’s career spanned several decades, and even in retirement, could be seen by neighbors in the garage at his home in Florence Place building small boats and even carving a few duck decoys. Before the city’s storm drainage improvements, one neighbor recalls Altice poling down the oak-lined avenue after a summer storm aboard one of his newly built skiffs.

There are probably not more than a dozen boats constructed before 1950, from any builder, that are still afloat in the Mobile Bay area. For this reason, it is important that we document those that remain and, when possible, their history. Maybe one or two could even find a home at the GulfQuest National Maritime Museum someday. For now, the search continues. Out there somewhere is an Altice Silver Streak, just waiting to be discovered.

David Newell is a professional engineer dedicated to the preservation of Mobile’s cultural heritage. Above all, however, he enjoys exploring our backwaters and bays with his family in their Stauter-Built boat.

Hometraining has Nothing to Do with Puppies

On Prayer and Chocolate

Loquat: Jewel of the South 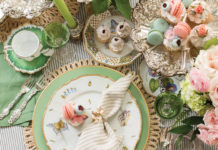 Setting the Table with New Friends