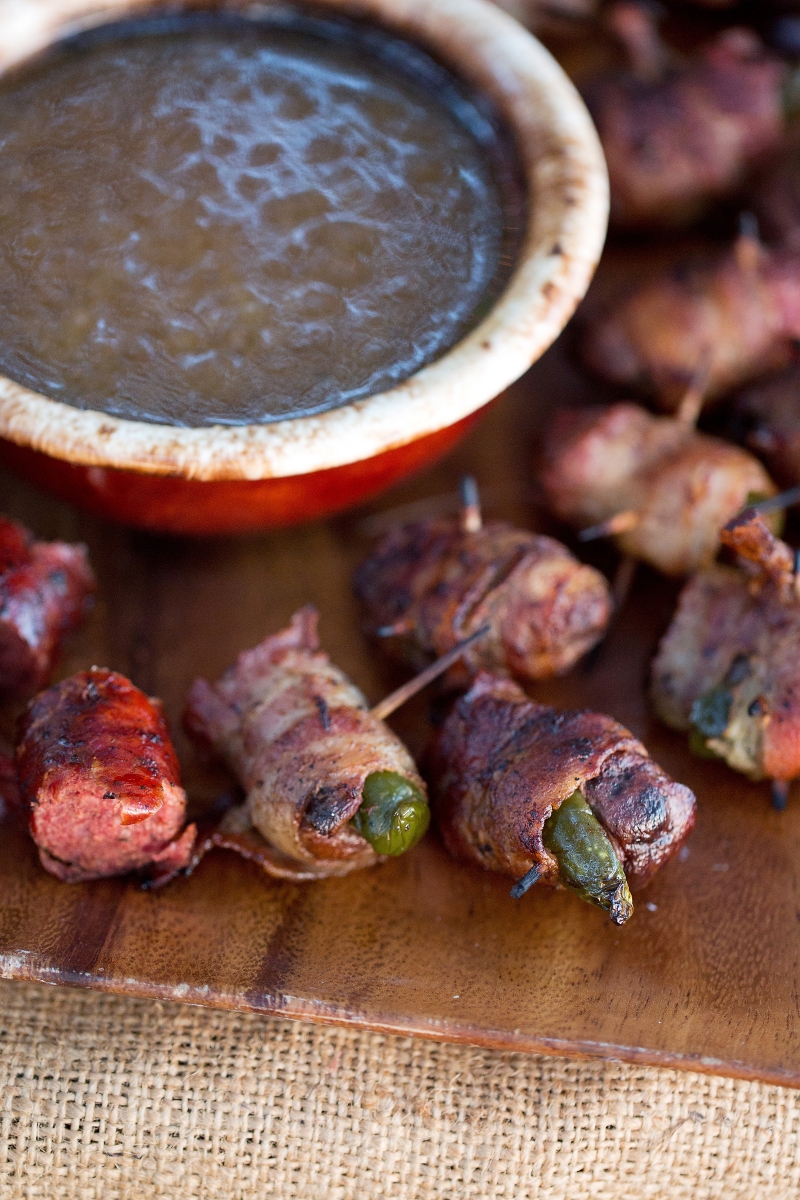 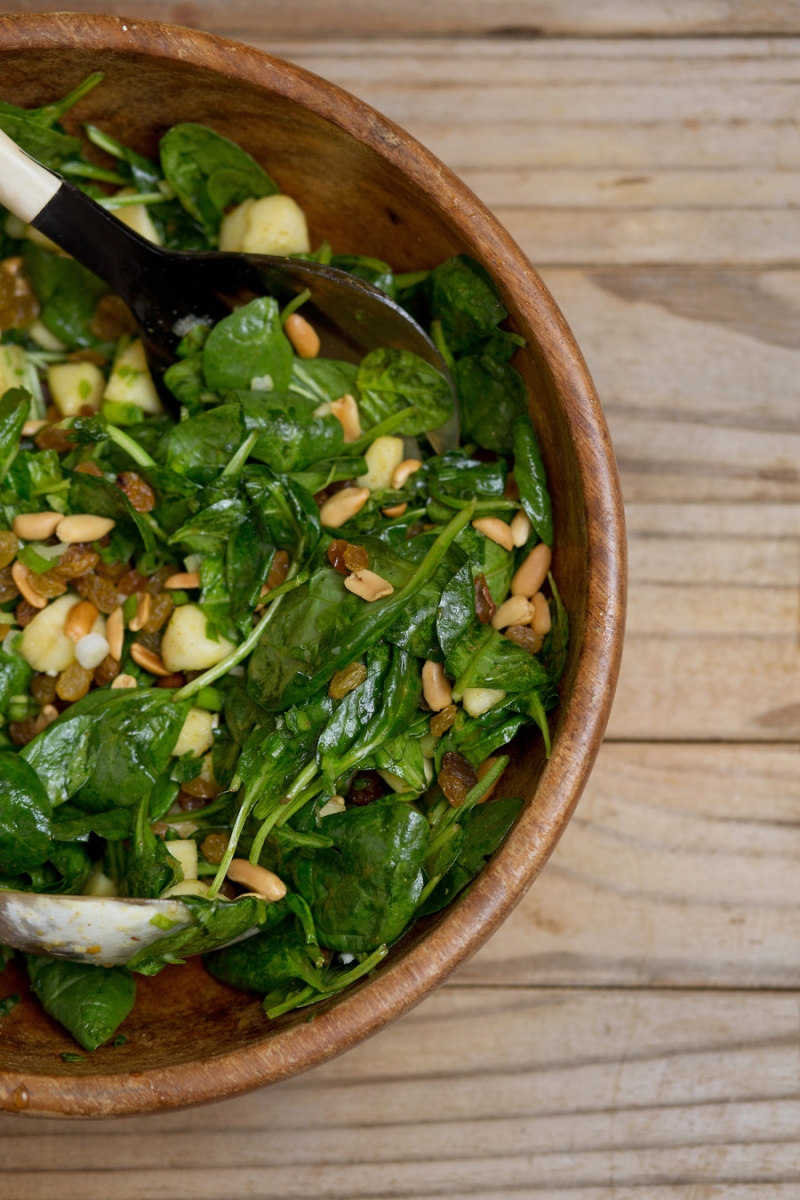 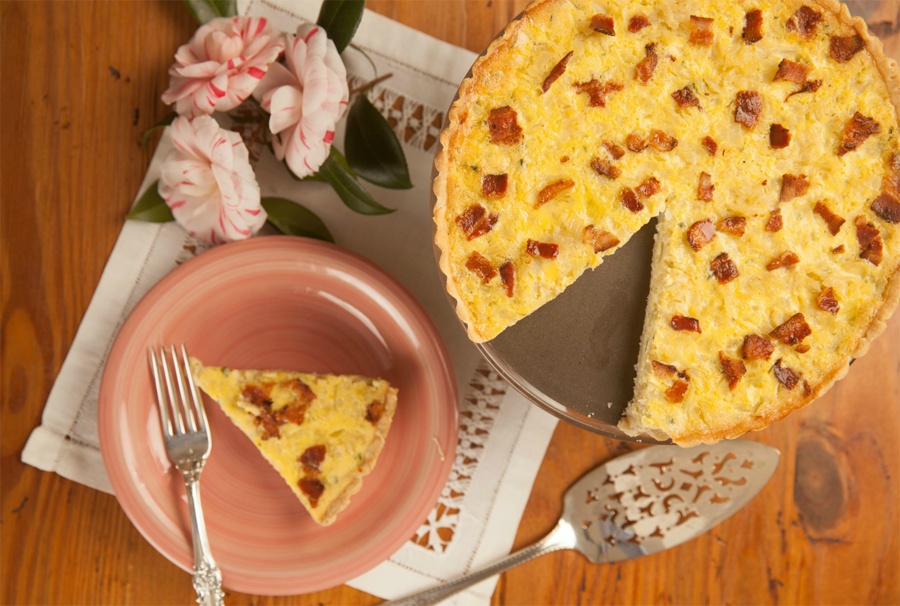 1. Preheat oven to 350 degrees.
2. Place the pie pastry into a 9- to 10-inch tart pan with a removable bottom and prick the bottom of the pastry with a fork. Bake until light brown, approximately 7 minutes.
3. Cook the bacon, drain on a paper towel, and set aside.
4. Saute the onions in the bacon drippings and set aside.
5. In a bowl, beat the eggs and egg yolks until fluffy. Add the chives, parsley, mustard, cheese and salt and pepper.
6. In a small saucepan, heat the cream until scalded, stirring constantly. Add the cream to the egg mixture gradually, beating constantly.
7. Pour the egg and cream mixture into the prebaked crust, filling it two-thirds of the way. Layer the sauteed onions over the egg mixture. Sprinkle the crumbled bacon over the top.
8. Bake on a baking sheet for 30 minutes or until set and brown on top. Serves 6 – 8. 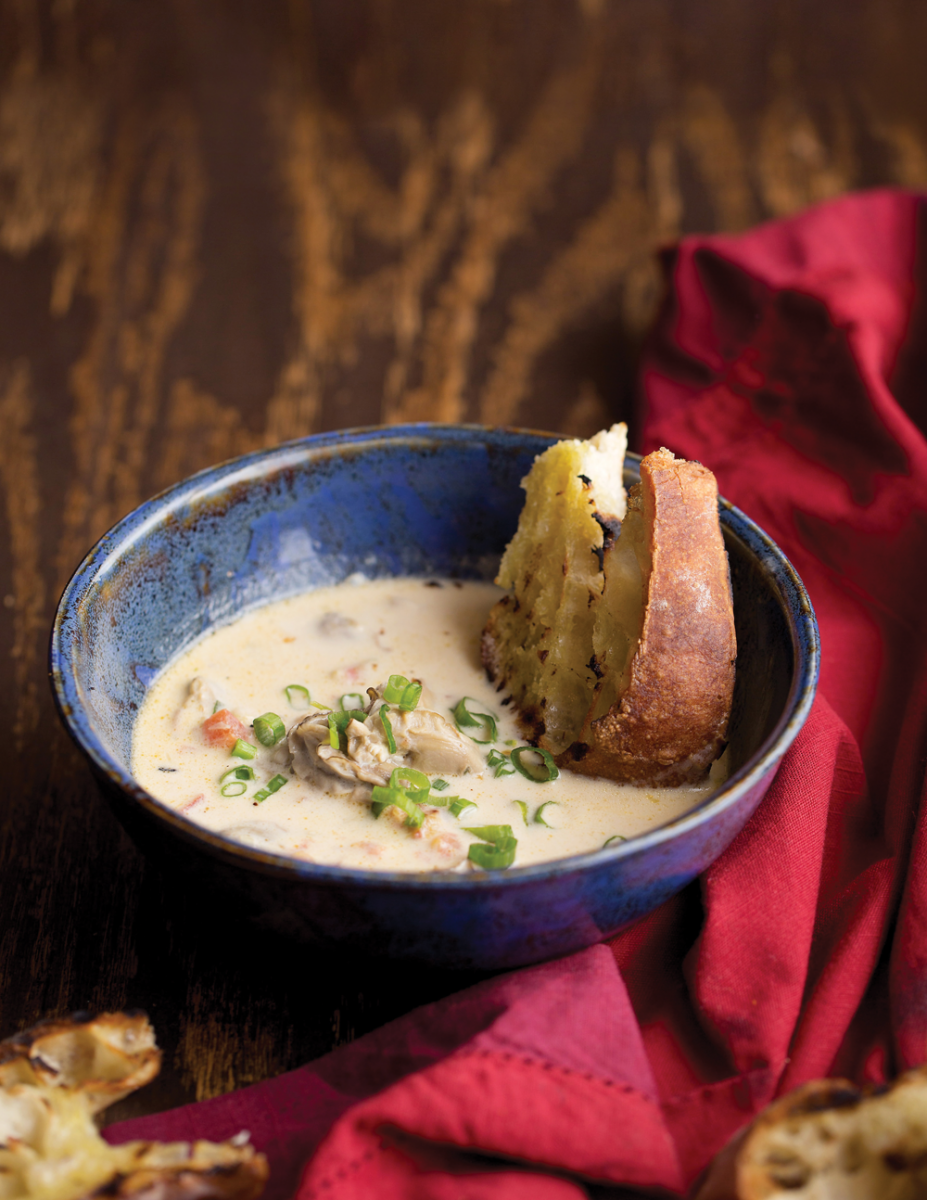 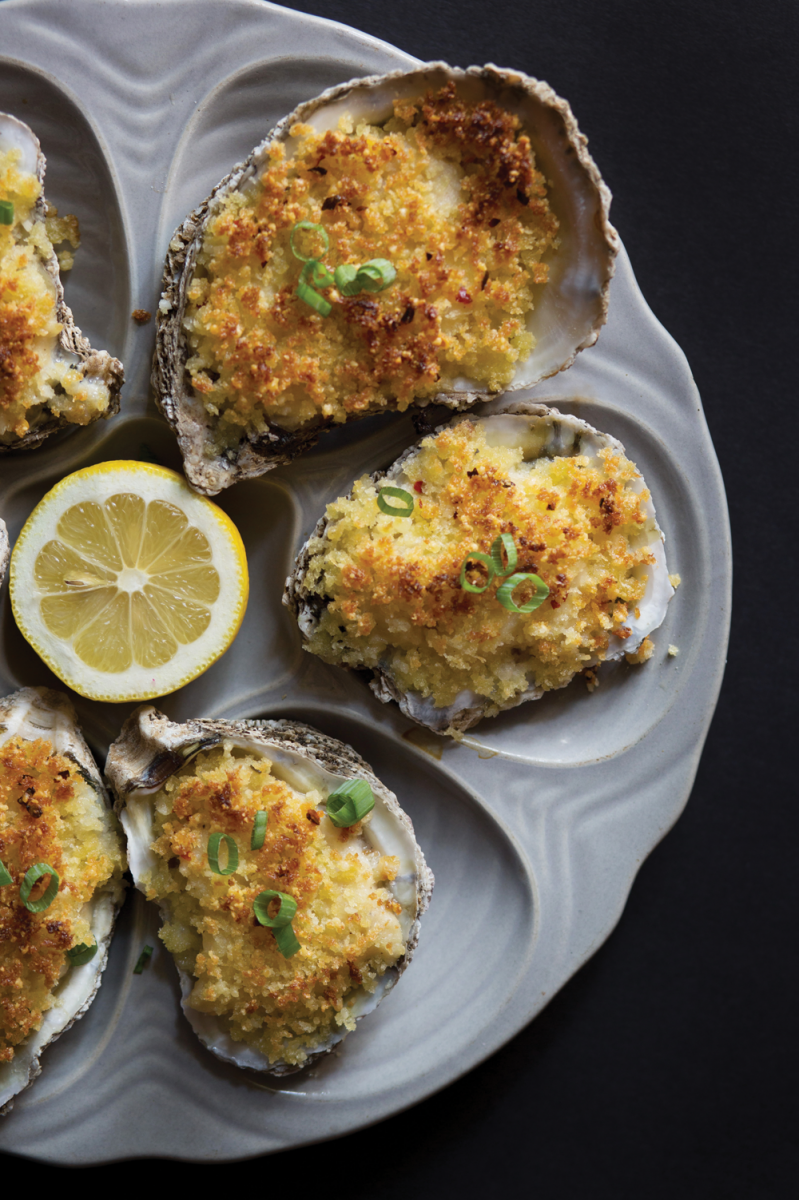 1. Cook the leeks and garlic in the oil in a large saucepan over medium heat until softened, about 3 minutes.
2. Add the tomato, green onions, oyster pan sauce, and thyme, increase the heat to high, and bring to a boil.
3. Lower the heat to a simmer, add the oysters, and cook just until they become firm and their edges begin to curl.
4. Season to taste with Tabasco, lemon juice, salt and pepper, and stir to combine the flavors. Serves 6.

“The rich flavor of this stew comes from a simple oyster pan sauce. I make it by heating some olive oil in a skillet with a diced large onion, a minced fennel bulb, 4 minced garlic cloves, a heaping teaspoon each of crushed red pepper flakes, thyme, tarragon and 2 bay leaves. Once the vegetables have softened, I add 1/2 cup heavy cream, 1 1/2 cups dry vermouth and 3 cups oyster liquor or water. Increase the heat to high and reduce the sauce by half,  about 15 minutes.” Makes about 3 cups

Featured in “Blessings on the Gulf Coast, ” November 2015. Photo by Elizabeth Gelineau

1. Melt the butter in a large saucepan over medium heat. Whisk in the flour and whip up a roux, whisking until it turns blond, for about 5 minutes.
2. Add the onions and garlic, lower the heat, and continue cooking and stirring until the onions are soft.
3. Slowly whisk in the milk. Bring to a boil, then immediately reduce the heat to low. Let the sauce simmer, stirring occasionally, until it’s thick enough to coat the back of a spoon, for about 30 minutes.
4. Remove the pan from the heat and stir in the horseradish, salt and pepper. Cover the saucepan with plastic wrap and let cool.
5. Preheat the oven to 450 degrees. Salt and pepper the oysters and place them in a baking dish in a single layer. Pour the cooled sauce evenly over the oysters.
6. In another bowl, mix the breadcrumbs, Parmesan, olive oil and pepper flakes until the oil moistens the breadcrumbs. Sprinkle over the oysters and sauce in the baking dish.
7. Bake 15 minutes or until topping turns golden brown. Serves 6 – 8. 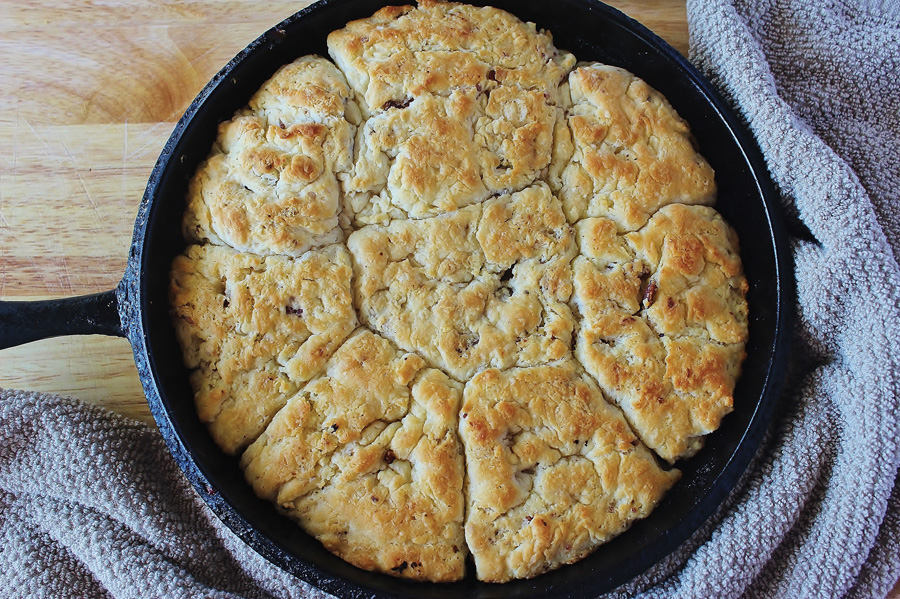 1. Preheat oven to 450 degrees.
2. In an 8- or 9-inch cast-iron skillet, fry bacon until crispy. Reserve 2 tablespoons of drippings and set aside. Dice bacon into bits. Set pan aside, leaving a thin coat of bacon drippings on the bottom of the skillet.
3. In a bowl, add flour and cut or rub in butter until flour resembles coarse meal. Stir in diced bacon.
4. Form a well in flour and pour in buttermilk. Stir with a wooden spoon until dough is wet.
5. If dough is too sticky to handle, sprinkle flour on top and work in until it’s no longer sticky. Separate the dough into 8 equal portions and roll each into a ball with your hands.
6. Place the dough pieces into the cast-iron skillet. Press down the dough with the back of your fingers until  it covers the bottom of the skillet. Brush tops with reserved 2 tablespoons of bacon drippings.
7. Bake for 15 minutes or until the tops are golden brown. Yields 8 biscuits. 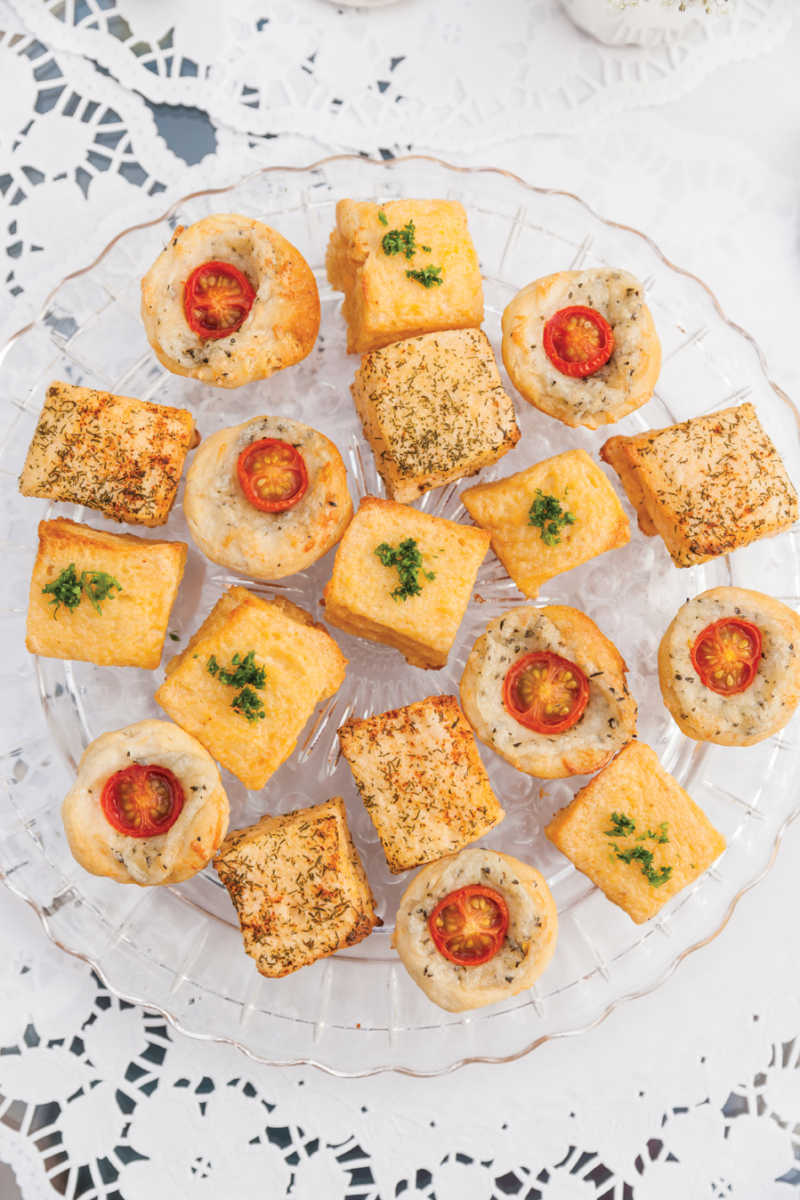 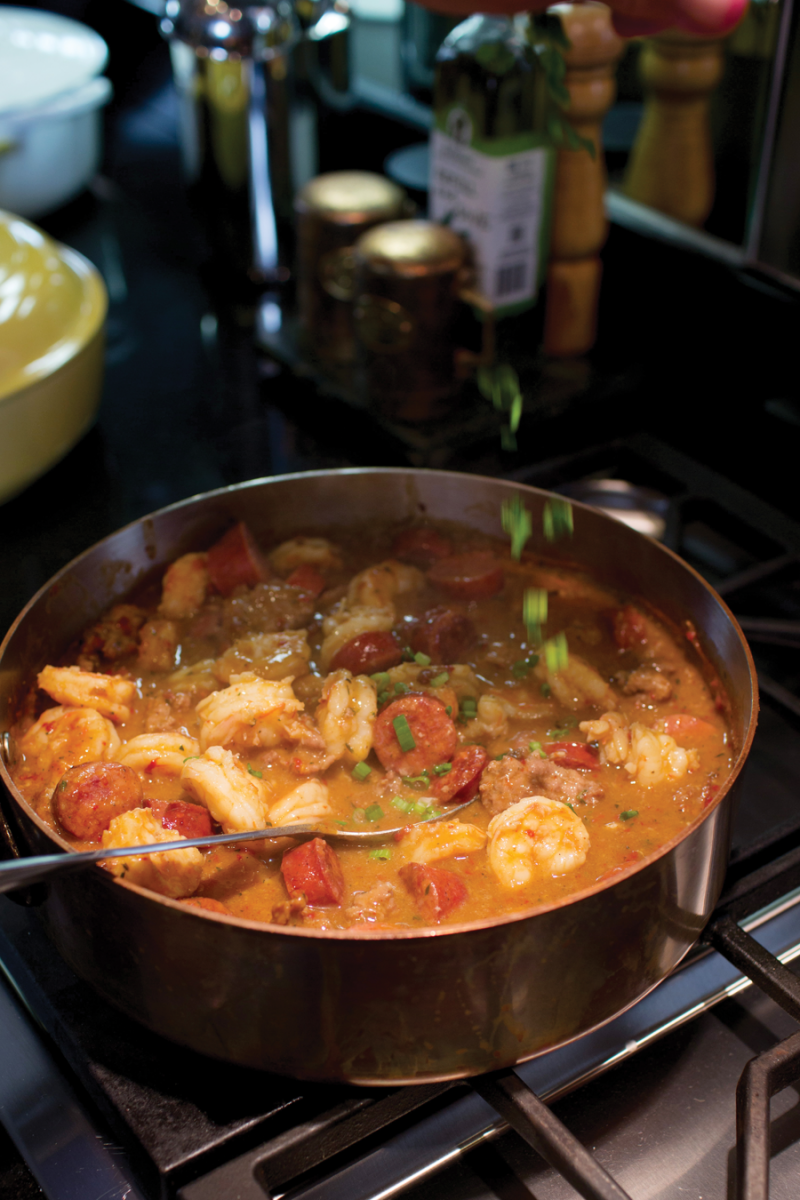 1. Cut crusts off loaves of bread.
2. Beat margarine, cheese spread and seasonings until the consistency of icing.
3. Make double-decker sandwiches by layering a bit of the cheese mixture and 3 slices of bread each.
4. Cut each stack of three into quarters. Spread remaining cheese mixture over top and sides of each quarter.
5. Sprinkle dill and cayenne over top.
6. Freeze on cookie sheets; then transfer to zip-top plastic bags.
7. When ready to serve, preheat oven to 375 degrees. Bake for 10 – 15 minutes. Makes approximately 6 dozen.

Featured in “Blessings on the Gulf Coast, ” November 2015. Photo by Elizabeth Gelineau

1. Heat the oil in a large skillet over medium heat.
2. Season the shrimp with salt and sauté until they start to brown but are not cooked all the way through. Remove the shrimp and set aside.
3. In the same pan, sauté the smoked sausage, crumbled pork sausage, onion, garlic and thyme until they become aromatic, about 5 minutes. Add the stock and bring to a simmer.
4. Reduce the sauce until it is nice and thick, about 3 – 5 minutes. Return the shrimp to the skillet and cook another 5 minutes. Add the diced tomatoes and lemon juice.
5. Serve the shrimp in a big tureen topped with the green onions, with the grits on the side. Serves 6.

1. Bring 1 quart of water, salt and butter to a boil in a large saucepan, then slowly whisk in the grits. Lower the heat and cook, stirring often, until the grits become soft and creamy, about 20 minutes.
2. Remove from the heat and fold in the cheeses, pepper flakes and more salt. Serve right from the pan, or transfer to a skillet and bake at 350 degrees for 15 minutes. Serves 6.

1. Put shrimp heads and shells in a stockpot. Add carrots, celery, garlic and bay leaves.
2. Pour enough cool water to cover the contents of the pot by a few inches and bring to a boil.
3. Let simmer for about 2 hours before straining. 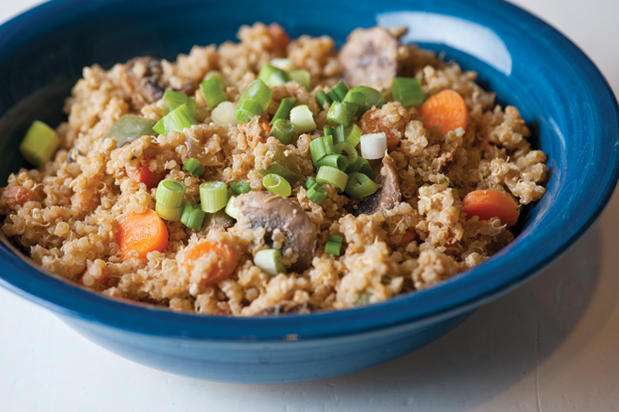 1. Heat 1 tablespoon of oil in a large skillet over medium-high heat.
2. Add bell pepper, onion and carrots. Stir-fry for about 5 minutes, until veggies are softened and lightly browned. Add mushrooms. Cook for approximately 5 minutes. Push veggies to sides of pan.
3. Add remaining oil and stir in garlic and quinoa. Stir-fry about 2 – 3 minutes.
4. In a small bowl, whisk together eggs and 2 tablespoons soy sauce.
5. Push quinoa to side of pan with the veggies.
6. Cook eggs in pan for 30 seconds. Then stir in with quinoa and veggies.
7. Meanwhile, whisk together remaining soy sauce, sriracha, sesame oil, rice wine vinegar and fish sauce. Stir into pan.
8. Let cook, stirring often for 5 minutes until sauce is absorbed. Top with chopped green onions, if desired. Serves 4. 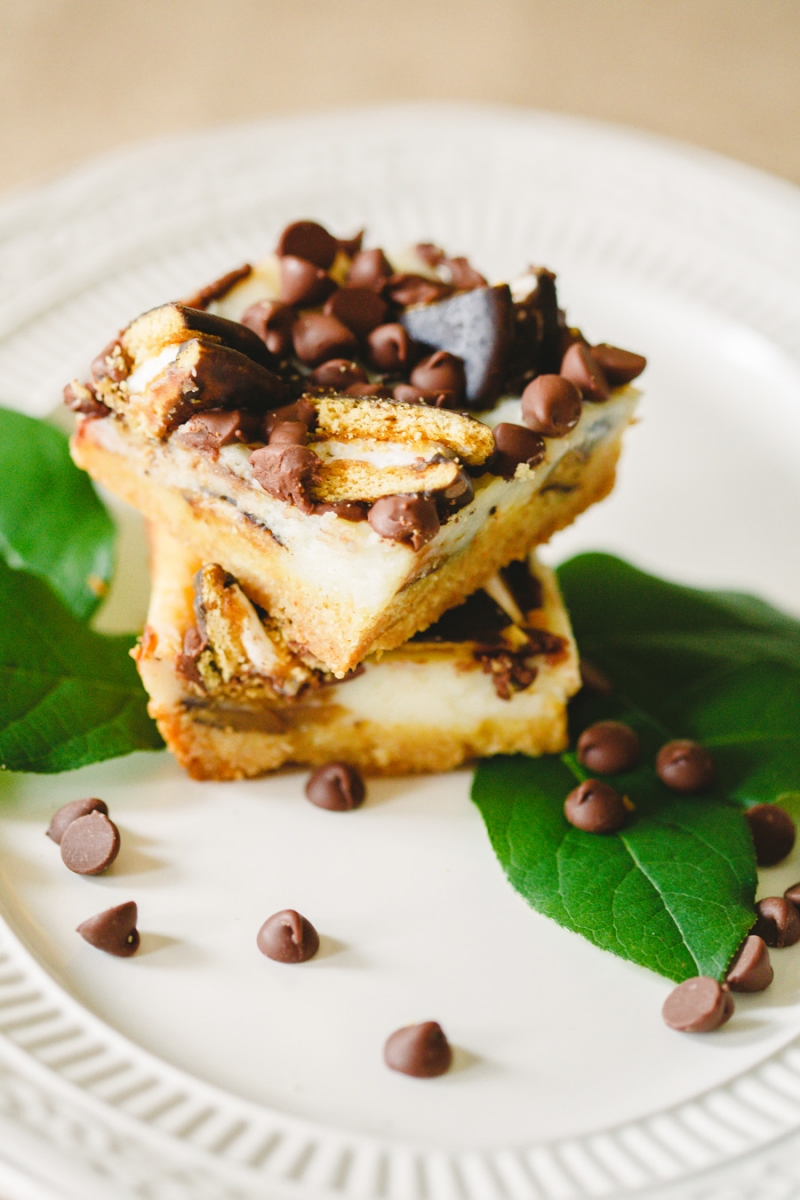 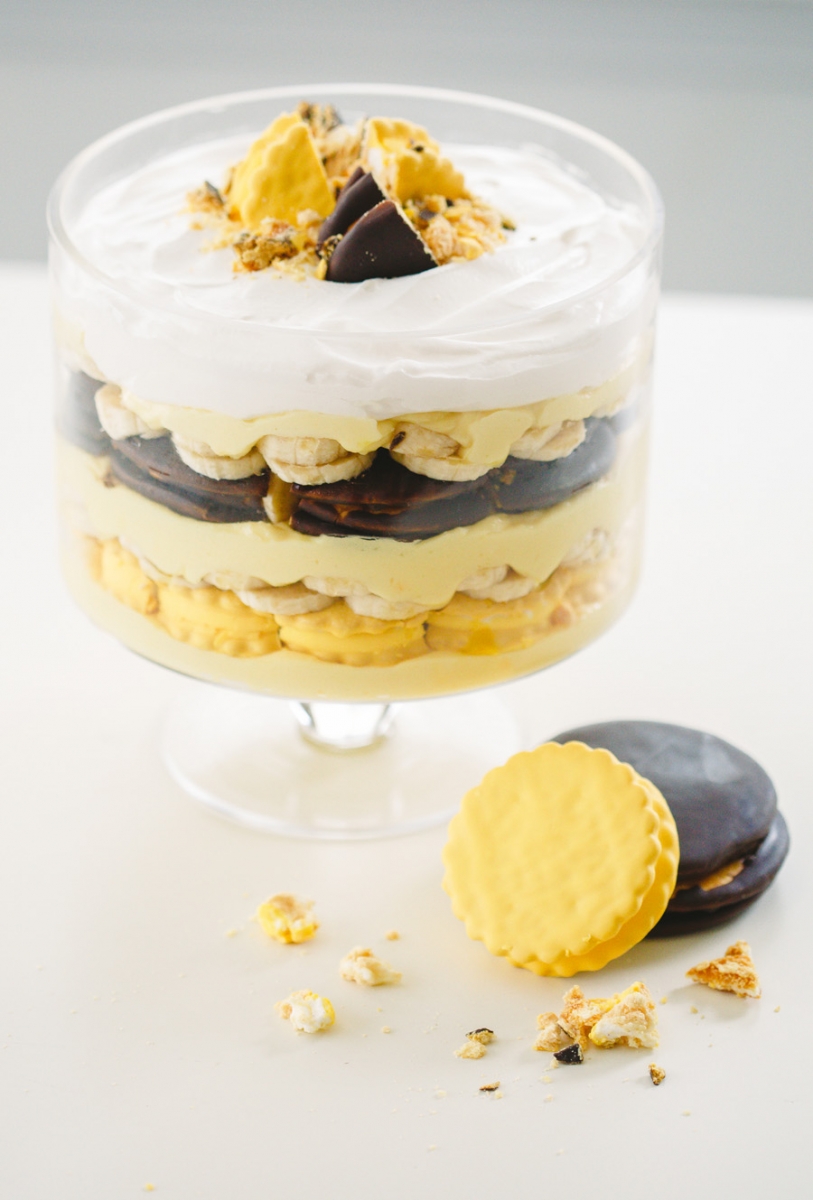 Featured in “Rolling in the Sweets, ” February 2015. Photo by Jennie Tewell

1. Preheat oven to 350 degrees. In a medium bowl, combine cake mix, butter and 1 egg. Press into the bottom of a greased 13-by-9-inch glass baking dish. Sprinkle with half of chopped MoonPies and set aside.
2. In a large bowl, beat cream cheese, vanilla extract and confectioners’ sugar with an electric mixer until smooth. Add two eggs, one at a time, and mix until completely incorporated. Pour mixture over crust.
3. Bake 40 minutes or until set. Remove from oven. Sprinkle with chocolate chips and remaining MoonPie pieces. Once cool, cut into bars. Makes 12 – 15 bars.

Featured in “Rolling in the Sweets, ” February 2015. Photo by Jennie Tewell

1. In a large bowl, beat cream cheese until smooth. Add sweetened condensed milk and vanilla extract and beat until blended.
2. In a separate bowl, beat pudding mix and milk until blended. Add pudding to cream cheese mixture and mix well.
3. In the bottom of a glass trifle bowl, add 1/3 of pudding mixture. Top with a layer of sliced banana
MoonPies and 3 sliced bananas.
4. Repeat layers with 1/3 of pudding mixture, chopped chocolate MoonPies and 3 sliced bananas. Top with remaining pudding mixture.
5. Spread Cool Whip evenly on top of trifle. Chill for several hours or overnight. Before serving, add extra MoonPie wedges or sprinkle MoonPie crumbs over the top for garnish, if desired. Serves 10 – 12. 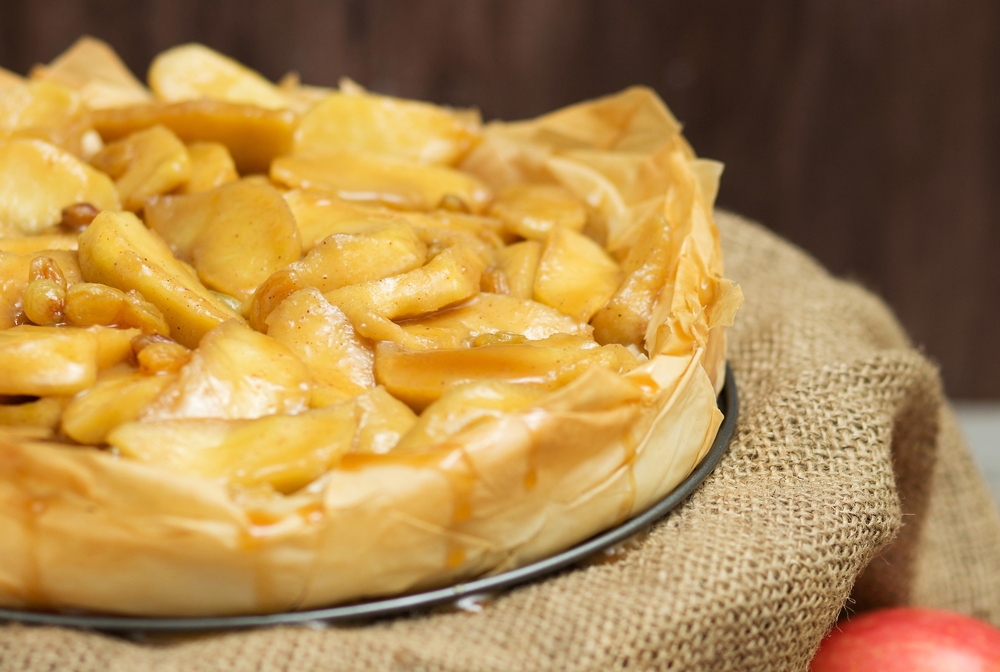 1. Melt butter in a large skillet over medium-high heat. Sauté apple slices and raisins in the butter (stirring frequently and carefully to avoid breaking the slices) until apples are tender but not mushy, about 10 minutes.
2. Reduce heat to low and sprinkle all with brown sugar and cinnamon,  stirring to coat and heat through, about 3 – 5 minutes. Remove from heat and let cool. Preheat oven to 374 degrees.
3. Coat an 11-inch tart pan with cooking spray. Gently press a sheet of phyllo into tart pan, allowing ends to extend over the edges; spritz lightly with cooking spray. Place another sheet of phyllo pastry across the first sheet in crisscross fashion. Spritz lightly and repeat with the remaining four sheets. Fold and tuck the edges of the pastry into the pan to form a rim.
4. Bake the pastry for about 15 minutes or until golden. Remove from oven and cool on a wire rack.
5. Sprinkle the inside of the shell with powdered sugar. In a small saucepan, combine caramels and milk. Cook over medium heat,  stirring constantly until the caramels melt and become sauce-like in consistency. Remove from heat.
6. Spoon apple-raisin mixture into phyllo shell; drizzle with caramel sauce. 7. Serve with ice cream, if desired. Serves 8. 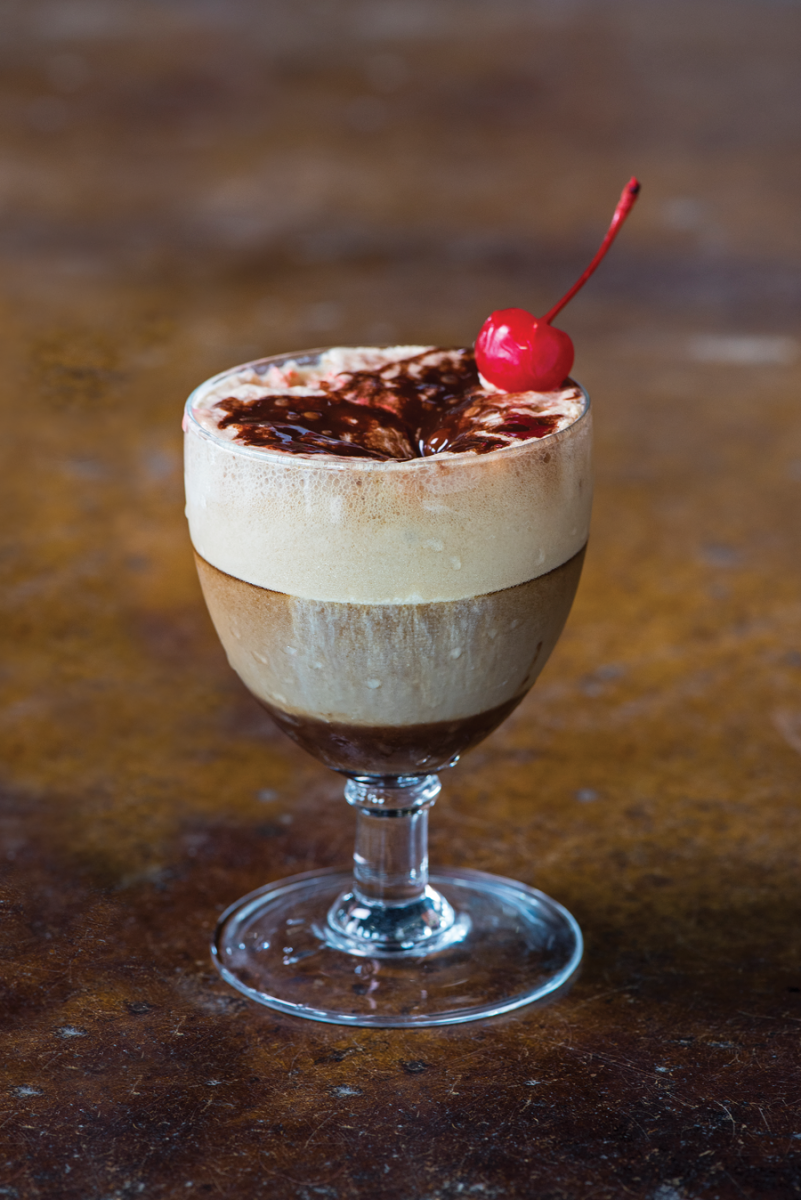 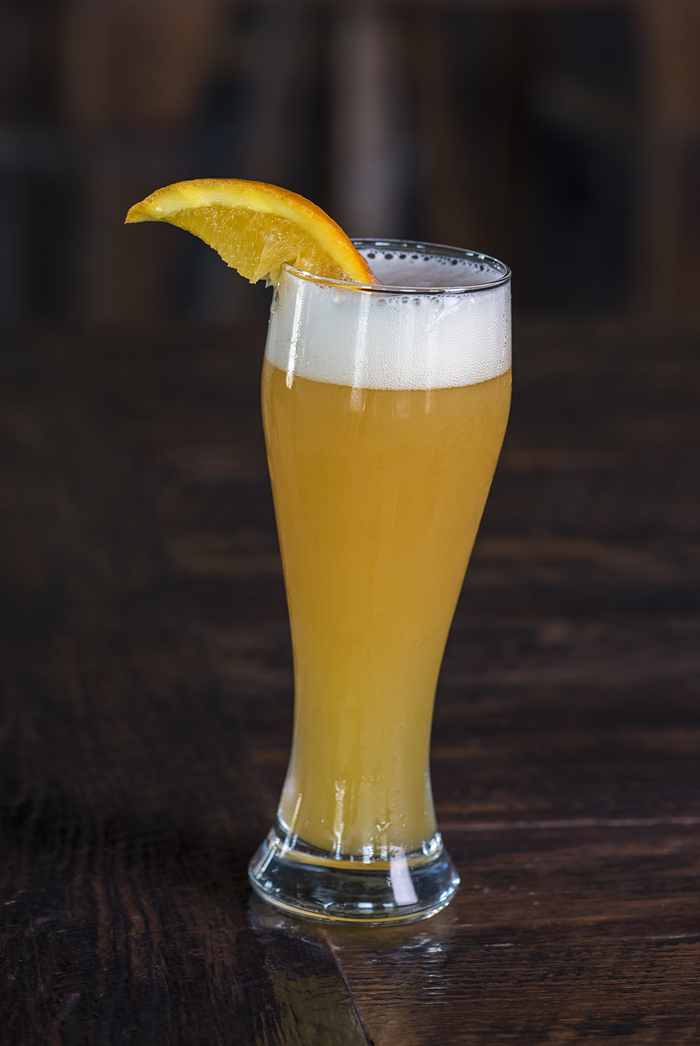 Featured in “A Toast to Beertails, ” May 2015. Photo by Elise Poche

Featured in “A Toast to Beertails, ” May 2015. Photo by Elise Poche

1. Pour Everyday Ale into a pilsner glass.
2. Top with juices and triple sec. Garnish with an orange slice.