Looking out over Mobile Bay when the wind is calm and the water reflects the sky, it’s hard to imagine that only a few thousand years ago, the Bay as we know it didn’t exist. Indeed, nothing seems more unchanging to us than the Earth, especially the familiar landscapes with which we’ve grown up. But close inspection of the geologic clues left behind from bygone ages reveals other worlds, worlds that only appear through what geologists call “deep time, ” the 4.5 billion years of Earth’s history. From shallow seas to dry deserts, countless former landscapes tell a grand story to anyone who can read the language. It is a story written in layer upon layer of sedimentary rock buried deep underground. The story is long, with countless twists still to be uncovered by geologists. But the main plot is clear — it all begins with plate tectonics.

A Brief Intro to Plate Tectonics

Earth’s continents, although they seem static to us, are actually in constant motion. By moving just a few inches a year, continents can cross the globe over a few million years. The continents are pulled, pushed, stretched and squeezed by oceanic plates, the rigid, dense slabs of basalt that form ocean basins and make up the largest portion of the Earth’s surface. Where two tectonic plates come together, the denser one is forced under the lighter one and down into the Earth’s interior in a process called subduction. Sometimes when this happens, two continents collide together with enormous force, pushing huge amounts of rock upward. Some of the most spectacular mountain ranges on Earth are a result of this violent process, including the Appalachian Mountains, which formed about 480 million years ago when Africa and Europe slammed into North America. The three continents all came together somewhere near current-day south Alabama and formed Pangea, a landmass that contained all of Earth’s continents.

The Triassic and Jurassic Periods

But, this cozy arrangement didn’t last long, geologically speaking – only about 100 million years. Heat built up under the thick, warm blanket of Pangea, and about 200 million years ago, the continents began to split apart. They rifted not far from where they had been sutured together, the present-day Gulf of Mexico. This rifting marks the beginning of the story of southern Alabama. The area we now call home saw dramatic changes throughout the ensuing Triassic Period.

During this time, the Gulf was a small, low-lying region of thinned continental crust. It formed an unstable connection with the Pacific Ocean. Seawater flooded in for the first time and then evaporated in huge quantities, with each episode of evaporation leaving behind a layer of salt in the small embayment of the Pacific Ocean. Over time, these salt layers accumulated to form huge salt deposits that still shape the seafloor of the Gulf of Mexico today. Rich oil fields can be found where the salt flowed upward and deformed overlying strata.

Eventually, as Europe and Africa continued to pull away from North America, the Atlantic Ocean itself opened up, and the seafloor of the Gulf began spreading apart. The Yucatan Peninsula pulled further away from Florida, splitting the salt deposits in half and creating space for more sediments.

During the late Jurassic Period, sea levels were so low that most of the Gulf became a dry desert. Seas of sand invaded where there were once seas of water. Working with rock cores from oil wells, geologists have identified the telltale signs of huge sand dunes that blanketed south Alabama. Eventually, the land subsided and the seas flowed back in over Alabama. Warm, clear, tropical waters were a perfect habitat for coral, plankton, algae and bacteria. These marine critters thrived in the shallow Gulf of Mexico in vast quantities, leading to some of the large oil reserves that are present today. 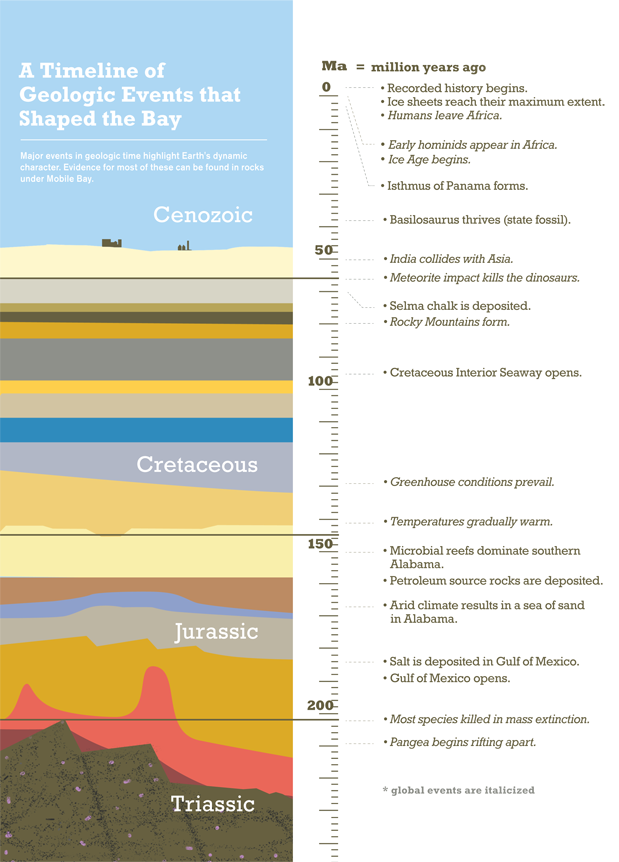 Disaster and the Cretaceous and Cenozoic Periods

It is rare that the geologic record preserves the events that happened in a single day. But one day about 65 million years ago, at the end of the Cretaceous Period, an asteroid struck the Gulf Coast off the Yucatan Peninsula, right in our geologic backyard. An impact of such enormous mass and speed resulted in a huge explosion that excavated a crater hundreds of miles wide, and instantly vaporized tons of rock. The rock vapor rose up into the atmosphere, where, much like water vapor, it condensed and rained down in trillions of tiny droplets. Most of these spherules burned up in the atmosphere, each one releasing its own little packet of heat. The combined heat from trillions of tiny fireballs was devastating. For a few days, the atmosphere essentially became an oven. Some animals survived by burrowing underground or swimming underwater. Most of the dinosaurs, which had ruled the Earth surface for 200 million years, died. Birds are the descendants of those dinosaurs that escaped the firestorm, perhaps by flying above it, perhaps by holding out in underground nests.

The period after the extinction of the dinosaurs is set apart as the Cenozoic, the period of “new life, ” the age of mammals. It has has proved to be one of the most dynamic periods of Earth’s history. About 50 million years ago, India collided with southern Asia, creating the high Himalayas and the Tibetan plateau. In North America, the Rockies reached something resembling their present state. About 3 million years ago, the Isthmus of Panama formed, shutting off the Atlantic from the Pacific, and reorganizing ocean currents on a planetary scale. Near the beginning of the current ice age, the first hominid, Homo erectus, appeared in Africa 2 million years ago.

Most of us have the wrong idea about ice ages. Rather than a relatively short period of extremely cold weather, an ice age is a period of Earth’s history marked by generally low temperatures, when ice sheets reside on one or both of Earth’s poles. Polar ice caps have strong cooling effects on global climate and tend to reinforce their own existence, leading to ice ages that last millions of years. As it turns out, these periods are quite rare; geologists have distinguished only about five during the 4.5 billion year record of Earth’s history.

The current ice age began about 2.6 million years ago in the Pleistocene Epoch, and has fundamentally shaped the Gulf Coast. This ice age is separated into colder glacial periods punctuated by relatively warm, short periods called interglacials, which are the result of small variations in the Earth’s orbit. The current epoch, the Holocene, is simply the most recent of these interglacials, albeit a particularly long-lasting and stable type that comes around about every 100, 000 years. The Holocene interglacial began only about 11, 700 years ago, just a brief moment ago in geologic time.

The polar ice sheets during glacial periods were so thick and extensive that they lowered sea level by nearly 500 feet. Walls of ice, miles high in places, would have dwarfed the tallest skyscrapers of our modern cities. Ice didn’t reach the southern U.S., but it changed the climate and sea levels, which shaped the Gulf Coast into what it is today. 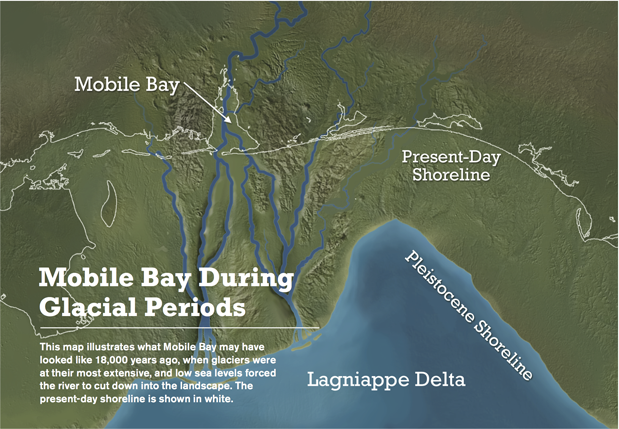 At the height of the glacial period, the Last Glacial Maximum, global sea level was about 400 feet lower than it is today. The Alabama Gulf Coast would have been about 50 miles further south. Rivers were forced to cut sharply down through the terrain to reach the Gulf, creating steep, v-shaped valleys called incised valleys. Mobile Bay is a textbook example of one. The valley system began where the Bay is today and wound its way south, toward the coast. Distributary rivers dumped heaps of sediment at the edge of the shelf in a lobe-shaped delta. There probably wasn’t much of a bay at the time, rather a sediment-laden delta such as the one that forms at the mouth of the Mississippi, but smaller.

This version of the Mobile-Tensaw Delta was active from 85, 000 to 11, 700 years ago, much longer than the current bay has been around. When the ice started to recede, pulses of meltwater and sediment flowed from the retreating ice sheets and into the oceans. The seas began rising. Shorelines slowly stepped back toward their current positions, and sediment filled in the incised valley systems. The shelf was drowned. The Mobile Bay we see today is merely the upper tip of the much larger incised valley, which is now only visible in seismic data. However, there is one more tantalizing clue. In 2005, Hurricane Katrina shifted around huge loads of sand near the Gulf Coast. It uncovered a drowned cypress forest, which sediment apparently had preserved. Ancient trees were still standing upright and traced out the paths of meandering rivers. A floodplain of the ancient landscape had been uncovered – a window into the past.

What are we to take away from all of this? Why does the story of Mobile Bay captivate our imaginations? It gives us important insights into the kind of place in which we find ourselves. It tells us about the type of planet our Earth really is, viewed through the lens of deep time. This little history of Mobile Bay shows that we are living on a planet of constant, relentless change. Earth, ocean, atmosphere and life interact in intricate, sometimes unexpected ways. Like Mobile Bay and the Mobile-Tensaw Delta, many familiar landscapes we cherish were drastically different in the recent past. They will one day be changed again. Knowing this, we can cherish them all the more.