Mobile is much more diverse than one might expect to find in the Deep South. People from all over the world move here to study at local universities, and the city is also home to the only Refugee Resettlement Program in Alabama. Yearly we welcome about 200 people who have fled their home countries because of war or persecution; since 1975, Mobile has opened its doors to more than 6, 300 refugees. Many brave newcomers – refugees and otherwise – remain here and become doctors, computer scientists, engineers or laborers. Some have worked hard, saved their money and gone into business for themselves, including owners of some of the Bay area’s most beloved international restaurants.

Whether you’re hitting up your favorite Vietnamese, Middle Eastern, Indian or Jamaican joint, you can be assured of two things: you’re in for a tasty meal, and you’re helping someone achieve their own version of the American Dream. 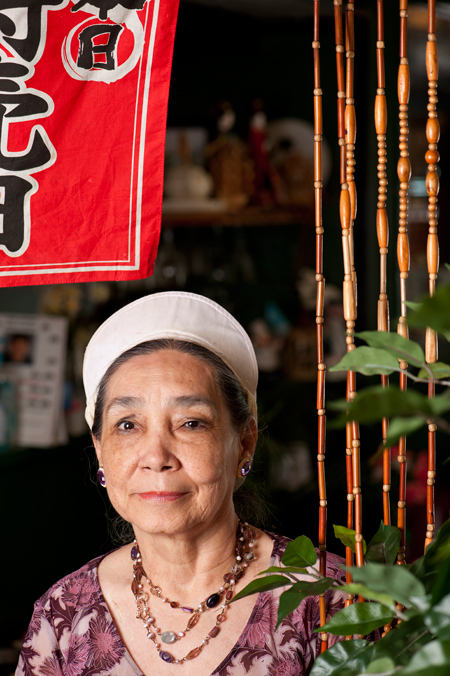 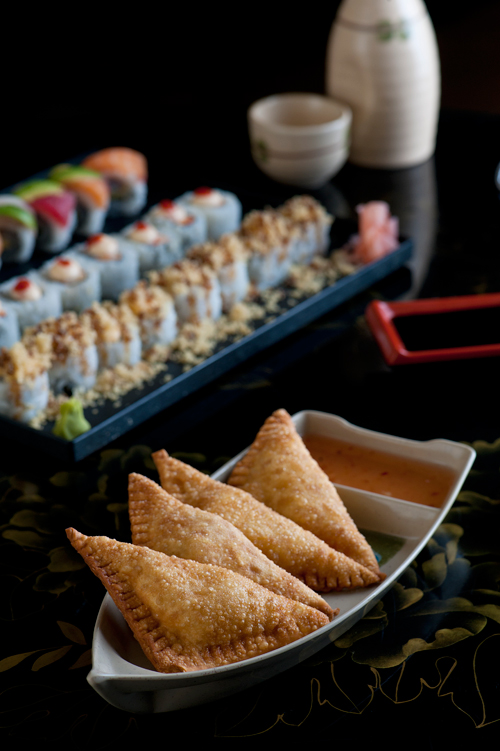 Sushi is no longer a novelty in the U.S. or Lower Alabama, but finding consistently good sushi can be a challenge. Juli Rondy, owner of Fuji San, learned the art of rolling sushi and cooking Japanese food after moving to Mobile in 1994 from Indonesia. In her home country, she owned a French restaurant, paying homage to her heritage — Juli is half Chinese and half French. The principles, techniques and standards she learned from cooking French food influence the way she runs her Japanese restaurant. “I make everything from scratch, ” she says. Juli gets to know her customers and appreciates their feedback. Above her sushi preparation area is a saying that perfectly describes her hospitality: “Come in as guests; leave as family.”

Crab Rangoon
Perfectly crisp on the outside and gooey in the middle, this app features a rich cream cheese and crabmeat mixture packed into a thin, fried wonton shell.

Spicy Tuna Roll
Juli makes all of Fuji San’s visually pleasing sushi rolls herself with high-quality fish and homemade sauces. The spicy tuna roll has a slight kick, but the flavor of the fish still shines through.

Crunchy Shrimp Roll
This one is a good starter for sushi novices. Loaded with fully-cooked plump shrimp, fresh avocado, cream cheese and a flaky topping, it’s a superb version of a favorite traditional roll.

Fried Banana
As a perfect finale to her feasts, Juli offers up her delicious fried bananas to every customer for free. With a crispy caramelized exterior and a soft center,
this banana is one of the best.

Here is a lesson on not judging a book by its cover. Surrounded by abandoned buildings, Yen Restaurant doesn’t look like much on the outside, but loyal customers aren’t fazed. You’ll be greeted by owner Tuyet Pham, a tiny, shy Vietnamese woman with a welcoming smile. She and her husband Yen Kim Li fled South Vietnam when it fell in 1975 and came to Mobile through Catholic Social Services’ Refugee Resettlement Program. Before opening their restaurant in 1997, Tuyet worked at McDonald’s for two years, and Yen repaired appliances for 15. After opening the eatery, the couple sent all four of their children to the University of South Alabama. Yen passed away 10 years ago, but Tuyet has carried on his legacy and spends most of her time at the restaurant. “She puts her whole heart into this place, ” manager David Mann says.

Shrimp-wrapped Crab Claws
Tuyet packs chopped shrimp around a large crab claw, rolls it in flour and deep fries it, creating a delicious appetizer you don’t want to miss.

Pho
If you’ve heard about Vietnamese food, you’ve heard of tripe, which is beef stomach. It is a staple in pho, an infamous yet delicious soup of beef broth and rice noodles.

Summer Rolls
Unlike spring rolls, summer rolls, which are served with Yen’s house-made peanut sauce, are not deep fried, but wrapped in rice paper and stuffed with vermicelli, shrimp, sliced pork, cilantro, mint (which is grown at the restaurant) and bean sprouts. 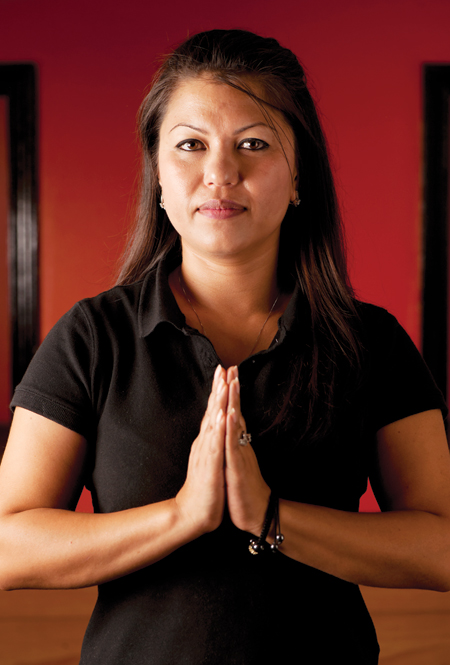 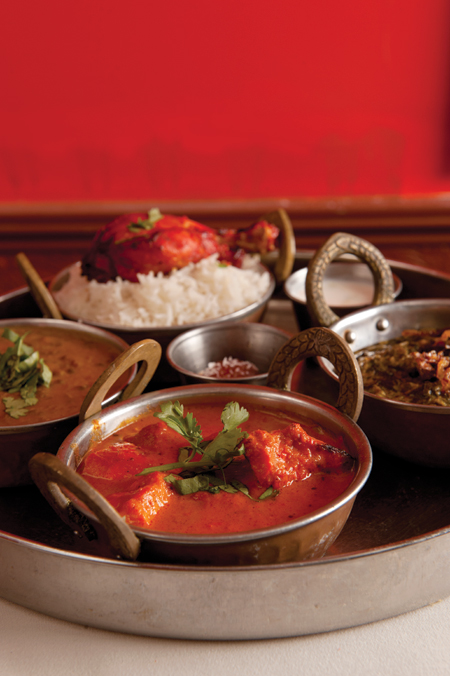 Rich sauces, piquant chutneys and a wide variety of choices make Indian food a dream for adventurous eaters. Owner Sabina Shahi recommends the lunch buffet to diners who are new to Indian cuisine — “that way you can try everything.” Shahi moved to Mobile from the small country of Nepal in 2007, where she lived with her husband and in-laws. There, it was her job to cook for her family; here, she owns her own business. “In Nepal, we (women) don’t need to work — we just cook for the family, ” she says. “When we came here, the reality was that I needed to work. America makes us strong.”

Chicken Korma
Chicken and veggies are braised in a spiced yogurt sauce.

Mango Lassi
For a refreshing sip, sample this fruity and frothy Indian specialty whipped up from yogurt, water and
mango pulp. 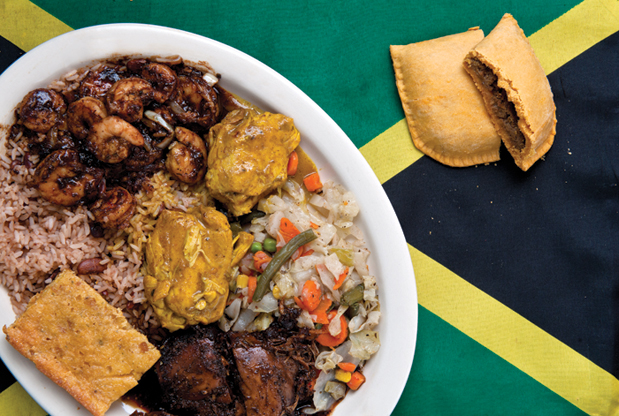 If you’re craving comfort food, island atmosphere and friendly service, head to Jamaican Cafe, where you’ll be transported to the Caribbean as you sit in a bright yellow room eating authentic tropical food prepared by ever-smiling owner Vivia Morissette. “Here is always a friendly gathering place, ” she says in her soothing Jamaican accent. When Vivia moved to Mobile 11 years ago, she quickly formed relationships with other Jamaicans in the area and cooked for them often. “My family has a restaurant back home, so cooking is a part of me, ” she says. “I started having people over. Everybody said, ‘Girl, your food is so good.’ So in 2003 I started Mobile’s first Jamaican restaurant.”

Brown Stew
This slow-cooked, fall-off-the-bone marinated chicken served in a rich brown sauce is straight-forward, comforting and a familiar flavor profile for most American diners.

Jerk Chicken
Spicy and sweet, Vivia’s jerk chicken has a thick crust of delicious seasoning, thanks to a zesty dry rub featuring allspice and hot peppers. 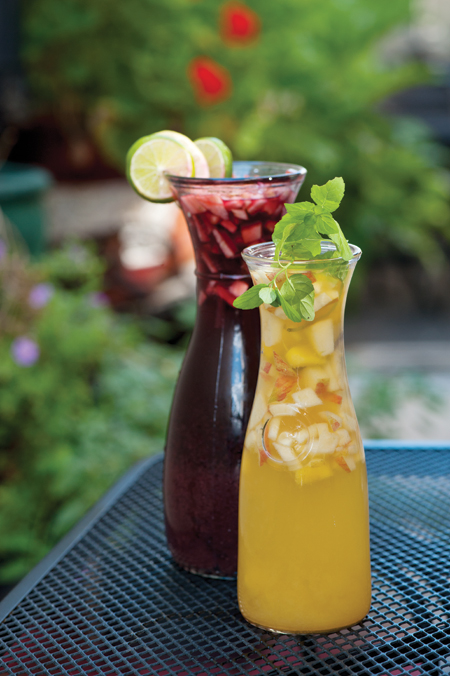 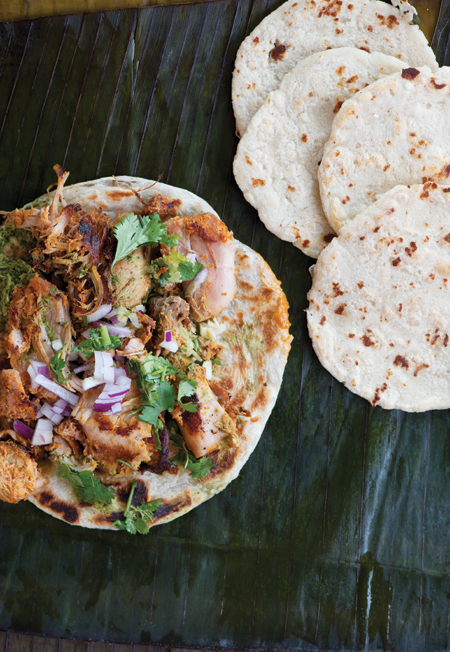 When you see a restaurant serving two completely different types of cuisine, it usually isn’t a good sign. Los Arcos is the exception. At this Spring Hill favorite, you’ll find authentic Mexican, Costa Rican and Indian food — all done extremely well. Owners Rocio and Shahrukh (Shah) Siddiqui met in Mobile. Rocio is Costa Rican, and Shah hails from India. When they started dating, the couple discovered they both loved cooking. “One Valentine’s Day, he made me crab cakes, ” Rocio says. “Everything was from scratch, and it was so delightful. I said, ‘Wow, Shah, you need to be cooking.’” Rocio had worked at Los Arcos as a server for years, and after she and Shah married, they bought the restaurant. They slowly began adding dishes from their home countries to the menu. “We didn’t want to take away anything from the restaurant’s existing customers, but we wanted to offer more options, ” Shah says. If you ever have the fortune of seeing Rocio and Shah interact, you’ll pick up on their giddy affection for each other. “People wondered if we could make it working together, ” Rocio laughs. “We only have one car, and we ride together to work every day. But we don’t ever fight.”

The Port City, along with the rest of the nation, has embraced the strong, fresh flavors of Mediterranean
food — gyros, hummus, feta cheese, kalamata olives, baba ghanoush, pita bread, shawarma meat, baklava. Mediterranean food represents the cuisine of a vast area, including North Africa, the Middle East and southern Europe. Each Mediterranean restaurant, depending on its owners, will have a different spin on the staples. Istanbul Grill strives to be authentically Turkish. One of the proprietors, Volkan Guler, says that in addition to serving delicious food, he focuses on hospitality and getting to know his customers. “In Turkish culture, hospitality is very important, ” he says.

Gyro
Istanbul’s meat — flavorful, thinly sliced and crispy on the edges — is way above average.

Turkish Delight
“Chronicles of Narnia” fans can finally get a taste of Edmund’s favorite treat, which has a jellybean texture and is flavored with rosewater and pistachios.

Noah’s Ark Pudding
One of the strangest, most delicious and healthiest desserts you’ll ever try. Packed with nutritious whole-grain wheat, chickpeas, beans, kiwi, coconut, apricots, raisins, figs and cinnamon, the flavors and textures combine to create a delightful sweet.

Baklava
Just like gyro meat, not all baklava is created equal. Volkan says the real stuff does not contain honey and is not triangular. His version is imported from Turkey and sliced into small, thick rectangles. 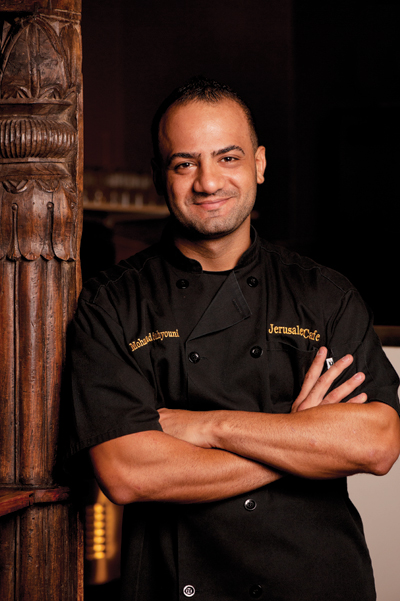 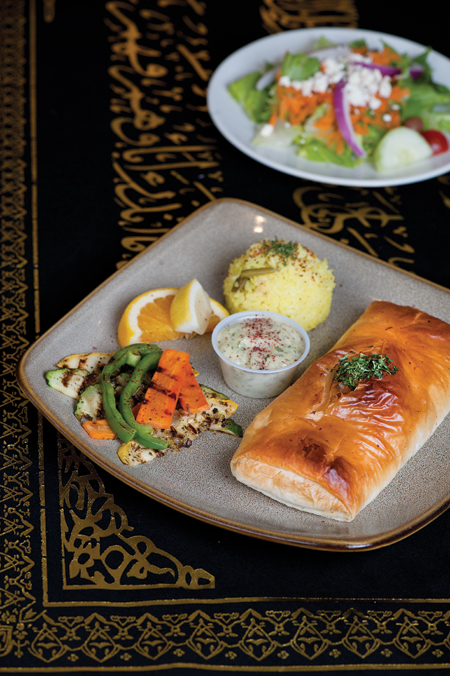 Jerusalem Cafe has been a Mobile favorite for Middle Eastern cuisine for 18 years. With an upscale atmosphere, it’s perfect for a work lunch or date night. Owner Mohannad Sahyouni was born in Kuwait and moved to Mobile to study at the University of South Alabama. He worked at the cafe for four years as a server and decided the restaurant business was his passion. Now, Mohannad owns the eatery and enjoys sharing those flavors that he grew up eating.

Chicken Pastry Plate
Marinated chicken is cooked with heavy cream, Parmesan and mozzarella, and combined with bell peppers, zucchini, summer squash and carrots. Then, it’s wrapped in phyllo dough and baked to a golden crisp. This rich, creamy, savory pie is served with a fresh pita, herb-spiced rice, vegetables and a choice of Greek salad or soup. 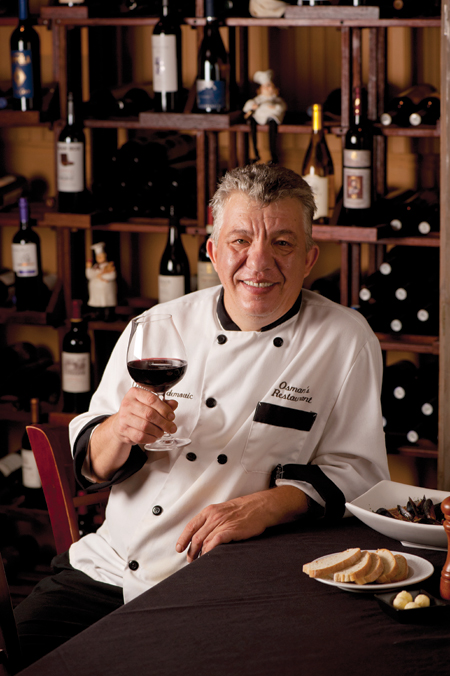 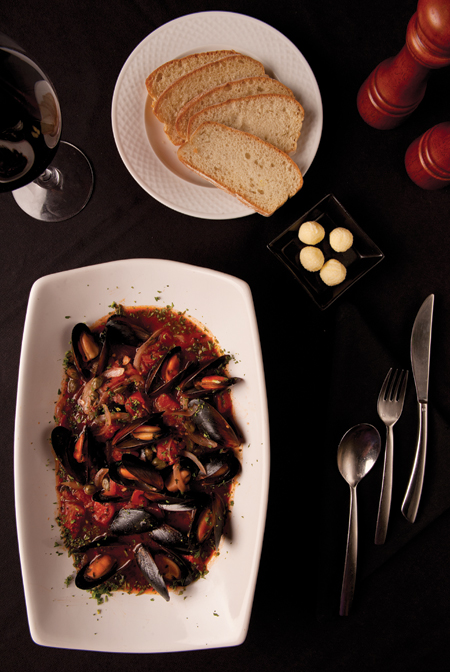 If you’re looking for an exquisite European dining experience, make a reservation at Osman’s. For 14 years, Osman Ademovic has been preparing Italian, German and French cuisine in his quiet little establishment. Osman moved to Mobile as a refugee from war-torn Bosnia in 1997. He worked at another restaurant for two years before investing all of his money into a place of his own. Osman took the knowledge and skills he gained from culinary school and working in restaurants in Italy and Germany to create his upscale European menu. “It’s a lot of hard work, but you have to work hard anyway, so why not do it for yourself?” he says.

To look at 7 Spice as you pass by it, you’d never guess what delicious food is being served in the tiny restaurant in the back. After you meander through a few fluorescent-lit grocery store aisles, you pass through an archway welcoming guests into the restaurant portion, where the atmosphere completely changes. The lighting is romantic, Middle Eastern antiques line the walls and culturally appropriate music plays softly in the background. “The grocery store and the restaurant complete each other, ” manager Rames Alsharef says. “If you like the spices, hot sauce or anything else we serve, everything is available in the store.” A meal at 7 Spice is affordable, presented beautifully in large portions, and served by friendly, accommodating waitstaff.

Carrot Soup
The rich, velvety starter is bursting with flavor and boasts a hint of a zing.

Vegetarian Chef’s Platter
This platter, which includes plenty of food for two people, is loaded with hummus, baba ghanoush, tabbouleh, fig leaves, falafel, feta cheese, kalamata olives and a pastry. Plus, 7 Spice’s dips (like everything else) are homemade and served with fresh pita.

Chicken Shawarma
Shawarma meats, popular in the Middle East and North Africa, are cooked on a rotating vertical spit and grilled for an extended period of time. The meat is shaved off as needed for serving and placed in a pita with seasoned French fries, bell peppers and other vegetables, along with 7 Spice’s house-made garlic sauce.