There was a time, not so long ago, when a relish tray was a staple on sideboards across the South. Every new bride had at least one and used it often. Indeed, until relatively recently, most women worth their salt knew how to “put up” their own pickles and preserves to serve on said relish tray. It was simply making the most of what you had, a way of stretching the budget and extending the bounty of a summer garden well into autumn and winter. Folks learned the sage saying, “waste not, want not” from their mothers and their grandmothers before them – and they did not waste much, even repurposing watermelon rinds into spicy, sweet pickles. Now, the time-honored practice is experiencing a bit of a resurgence; in keeping with yet another old adage, “everything old is new again.”

Sealing Tips from a Pickler

Once you place the vegetables and liquid in the hot jars, cap them with the ring and lid and let the jars sit until they seal. Make sure the seals are very hot when placed on the jars. I like to run my jars through the dishwasher so they are very hot. I put my rings and seals in a small pot of water and keep it on low to keep them hot while I am canning. – Brenda Roland

Debra Blackburn is a glorious cook who makes fabulous fig preserves. For a nifty treat, try her trick of softening good, store-bought vanilla ice cream and stirring in her homemade fig preserves then refreezing for a rave-worthy dessert. Blackburn says she also likes to serve the preserves over rich pound cake or on hot, buttered biscuits or yeast rolls. Any leftover syrup may be refrigerated and used on pancakes, to sweeten yogurt or to flavor drinks.

5 pounds fresh figs, preferably from your own bush, a generous friend or a local grower
5 cups sugar
1 1/2 lemons, seeded and very thinly sliced

1. In a deep pot large enough to hold 8 jars, place the clean jars and tops; cover with water. Bring to boil to sterilize the jars and tops while preparing preserves.
2. Wash figs in cool water and drain. Trim the stems just above the fruit. The extra bit of stem helps figs remain intact.
3. In a heavy-bottomed pot (to reduce the possibility of scorching), place figs; cover with sugar and lemon slices. Add just enough water to loosen the figs and sugar. The water should just begin to cover the sugar. Cook over medium heat until juices are thick and syrupy, about 10 minutes once mixture is hot. The liquid thickens a bit as it cools but should remain a syrupy preserve, not a thick solidified jam.
4. Using a wide-mouth funnel and a slotted spoon, divide figs among 8 hot, clean half-pint jars.
5. Ladle hot syrup over the figs to within a half-inch from the top. Seal jars.
6. In the same hot water in which jars were sterilized, return water to boil. Lower sealed jars into the water and process in a boiling bath for 5 minutes.
7. Carefully remove from pot and allow to cool until you hear the seal “pop.” A slight indentation on the top indicates a good seal. If proper seal isn’t formed after fully cooling, store in the refrigerator. Makes approximately 8 half-pint jars

Watermelon rind pickles are a classic, sweet addition to any relish tray. This recipe makes a delightfully crisp version.

1. Cut all the exterior green and interior red parts from the rind leaving only the white part. Cut into cubes.
2. Soak overnight in plastic bowl with enough water and lime to cover. Drain the rind cubes but do not rinse.
3. Cover with fresh water, bring to a boil, reduce heat and cook for 2 hours. Drain again and add vinegar, sugar and spices to make a syrup.
4. Bring to a boil, reduce heat and simmer for an hour or so. (Syrup should cover the rind cubes.) Seal in sterilized jars while liquid still hot. Makes approximately 6 pints

This recipe comes from Elizabeth Stevens, head of Downtown Mobile Alliance, who originally hails from Charleston. Her late Aunt Pink (short for Pinckney) always made these verdant beauties in a vibrant emerald hue (you may choose to reduce or omit the green food coloring in the recipe). They are time-consuming but addictive, not to mention especially festive for a holiday relish tray paired with crimson-colored spiced apple rings.

1. Soak sliced tomatoes in the water that has been mixed with lime for 24 hours. (Use a plastic tub for soaking, not metal). Drain carefully and soak in fresh water for 4 hours, changing water every half an hour. Drain well, then spread the tomatoes out and blot dry.
2. To make syrup, combine the sugar, vinegar and spices. (Aunt Pink always used an enamelware pot and wooden spoon for stirring.) Bring the syrup to a boil and pour over tomatoes. Let stand overnight.
3. The next morning, bring the syrup and tomatoes back to a boil and let them cook for an hour or until the tomatoes are “translucent.”
4. Add green food coloring to the syrup, if desired. Seal in sterilized jars while they are still hot. Makes approximately 8 – 9 pints

This recipe (and the two following) come from Brenda Roland, of Bay Minette, a seasoned pickling pro. Many of her recipes were passed down from her mom, Ruby Crabbe of Huntsville. 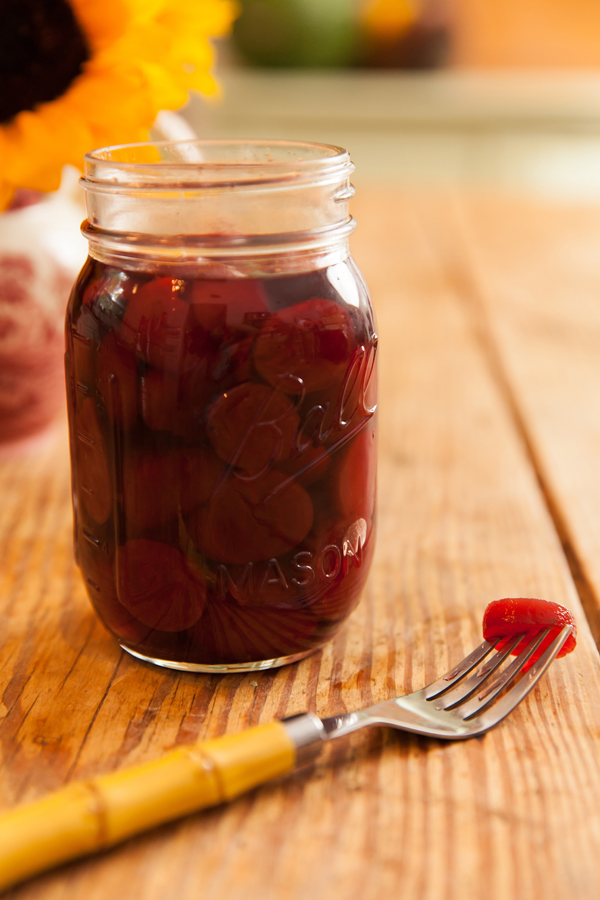 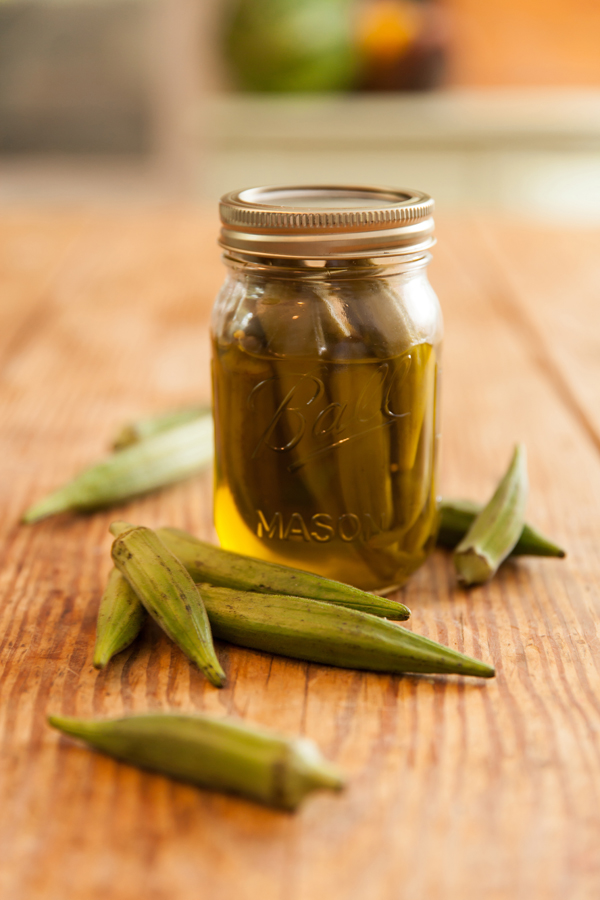 These bright red preserves, above left,  add a touch of rich sweetness to the mix. Plus, they are quick and easy to make.

1. If using fresh beets, peel and cook them just until tender (not mushy), like you would potatoes, then slice and pack into a sterilized pint jar.
2. Make a syrup by boiling the sugar, vinegar and spice.
3. Pour hot syrup over beets. Seal. Makes approximately 6 – 7 pints.

This versatile recipe does double duty as it can be used to make either pickled okra or pickles. For dill pickles, simply substitute cucumbers for the okra – the rest of the recipe remains the same.

1. Combine water, vinegar and salt and bring to a boil.
2. Carefully pack okra into clean, hot jars. Add alum, garlic, dill seed and crushed red pepper to each jar.
3. Pour hot vinegar mixture over okra and seal jars. Discard any leftover mixture or pour over cucumbers to make dill pickles. If making dill pickles, use sliced cucumbers or use small whole cucumbers; do not cook them. Makes about 4 quarts of liquid

text and styling by Sallye Irvine • photos by Todd Douglas