On September 9, 1710, a small brigantine hove into view at Dauphin Island and dawdled offshore. A clutch of French colonists gathered at the water’s edge to study the strange vessel and speculate as to her purpose. She was flying a French flag, which was both heartening and reassuring — heartening because the colonists hadn’t seen a supply vessel in three years, and their clothes were threadbare; reassuring because France and England were officially at war, though the reverberations had yet to be much felt in this distant corner of the world. As they watched and wondered, two white puffs suddenly appeared beside the vessel, followed by the unmistakable boom of shipboard artillery. This was the standard maritime distress signal, and the colonists assumed she was run aground on a sandbar.

Port Dauphin wasn’t much to look at — 20 rude dwellings with palmetto-frond roofs and a large warehouse on the island’s east end overlooking Pelican Bay and the Gulf of Mexico. It should have had a fort as well, but unfortunately the plans were tangled in bureaucratic delays. Modest as the little settlement was, it ably served as colonial Mobile’s outlet to the world. Deep-draft, ocean-going ships could anchor there to offload settlers and supplies and take on trade goods and passengers. Fort Louis de La Mobile, the colony’s capital, was located 67 miles to the north on the Mobile River’s banks.

While the colonists stood squinting at the vessel, she dropped two longboats into the sea. Within minutes, the strong crews propelled their craft onto the gently shelving white beach, and a pair of Frenchmen leaped over the sides. After brief introductions, they requested that the senior colonists present, army lieutenant Philippe Blondel and keeper of the royal warehouse Francois Derbanne, accompany them back to their vessel to render aid. Only when Blondel and Derbanne clambered aboard the brigantine’s weathered deck and beheld some 30 armed cutthroats did they realize their mistake. Rather than a small French trading vessel, they were aboard an English pirate ship out of Jamaica. Her captain had been to the island some time before as a merchantman and recognized a prize to be plucked.

Blondel and Derbanne could only watch helplessly while the pirates rowed back to the island and captured the little village without firing a shot. And so began a three-day ordeal. Timely relief was unlikely. None of the colonists had managed to escape, and even if they had, help was miles away. The corsairs roughly herded everyone into a couple of huts and then searched the village for valuables and weapons. On September 10, Blondel and Derbanne were brought ashore and ordered to unlock the warehouse. There, tightly stacked and awaiting the next French vessel, were 10, 000 deerskins, 15, 000 raccoon skins, 71 barrels of flour, and vital naval stores including rigging, blocks and sails. These routine trade goods, representing hundreds of hours of labor, were the stock in trade of 18th-century Gulf Coast pirates rather than the glittering treasure of popular imagination.

The Englishmen hauled their swag to the beach and began loading it into their longboats. This was hard work and slow going. The hides were stiff, ungainly and heavy in stacks. They had to be loaded into the boats carefully, rowed out to the brigantine, heaved on board and stowed below deck lest the surf ruin them. Intent on easier pickings, several pirates tortured the colonists to force them to divulge the location of any hidden loot. Whether this torture was verbal or physical or both (the record doesn’t specify), the pirates got nothing else for their trouble. Local legend tells of a jeweled cross that belonged to the Catholic Church hastily hidden in a well and never recovered. Satisfied that they had thoroughly plundered the place, the corsairs set fire to the rude buildings ­— excluding those that held the colonists — and returned to their vessel.

It was then that a voyageur from Mobile landed in his pirogue and discovered the chaos. He surprised one of the looters tarrying behind, leveled his musket and shot him dead. The pirates heard the bang as they strained at their oars and feared soldiers had arrived. Tired as they were, this spurred them to pull all the harder for their ship. No pirate in his right mind wanted to risk a fight with an equal or superior armed force. The captain didn’t scare quite so easily, however, and decided to be sure of the situation before leaving. Cattle were visible ashore, and he wanted to steal the bull. He ordered the anchor hoisted, no doubt accompanied by much grumbling on the crew’s part, and steered around to the island’s eastern tip where another longboat was dropped with a small party aboard.

This time the colonists were ready. The voyageur and Blondel had freed their fellows and scrounged up several muskets that the corsairs hadn’t confiscated, and now they concealed themselves just back of the beach. The final act probably took place near what is now known as Little Billy Goat Hole. One can imagine the scene — the grimly determined colonists crouched behind spreading dark green palmetto fronds, heavy muskets gripped in sweaty palms, eyes focused on a longboat full of nut-brown scoundrels armed to the teeth and getting closer by the moment. These Frenchmen were done being victims. They simultaneously lifted muskets to shoulders, flame and smoke leapt from the muzzles, and splashes kicked up on either side of the longboat. Sensibly alarmed, the pirates knew they were up against significant force and quickly turned around. At long last, their vessel let fall her salt-stained sails and mercifully sailed away.

The Dauphin Island raid exhibited many of the classic features of 18th-century piracy: deception, robbery, interrogation accompanied by torture, wanton destruction and retreat in the face of opposition. Its perpetrators were cowards bent on plunder — nothing glamorous about them. The incident is the only bona fide such attack on Alabama’s portion of the Gulf Coast, but its results were devastating. Property losses were staggering, and the already beleaguered French colonists were further demoralized. “The distress is great, ” one colonial official noted. At 27 Mile Bluff, Bienville worried about the colony’s viability, and the raid helped convince him to move Mobile downstream to be closer to its vulnerable outside link. A small fort was finally built on the island as well, with several mounted cannons. But it was too little, too late for those unfortunate colonists traumatized by the ruthless September buccaneers of 1710. 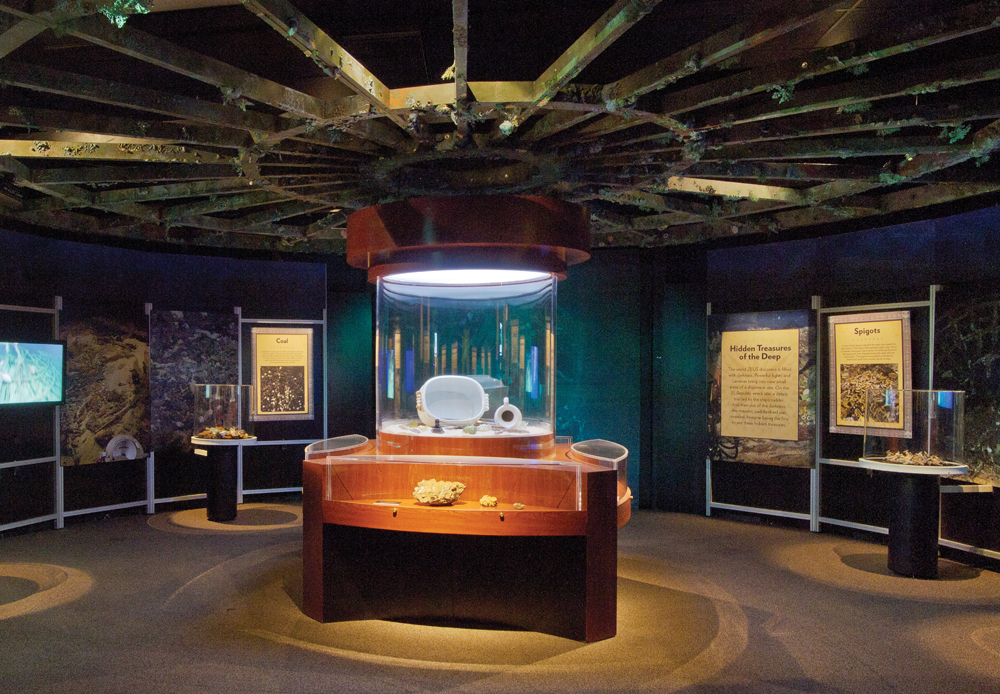 Shipwreck! Pirates and Treasure at GulfQuest

Want to learn more about the history of real buccaneers? Odyssey Marine Exploration’s traveling exhibit, now on display at GulfQuest, features more than 500 artifacts that archaeologists have found inside these sunken time capsules around the globe. It is a portrayal of marine archaeological expeditions at its finest, unearthing the true tales behind legendary swashbucklers and some of the most notable shipwrecks in the world. 9 a.m. – 4 p.m. W – F and 10 a.m. – 5 p.m. Sa.  GulfQuest • 155 S. Water St. 436-8901

John S. Sledge is currently at work on “Coursing the Furrowed Blue, ” a maritime history of the Gulf.