As a child growing up in Mobile, Catherine Hicks watched Pixar’s “Toy Story, ” never considering she would one day help make one of its sequels. The St. Ignatius and McGill-Toolen student loved art so much that she occasionally met trouble when caught drawing instead of paying attention in class. Not anymore.

Today, Hicks lives in the San Francisco Bay area and works for Pixar Animation Studios transforming fantasy into digital life. And even now, after five years with the company, sometimes it is delightfully hard for her to comprehend.

“One of my first projects was ‘Toy Story 3, ’” she recalls about being hired by the company in 2009. “It was like being in a museum and allowed to touch everything, ” she laughs. “I was in awe — Buzz and Woody! I grew up with these people!”

In 2008, Hicks was a junior at Ringling College of Art and Design in Sarasota, Florida, when Pixar’s recruiters visited the school looking for summer interns. “It was big news on campus, ” she recalls. “I skipped an art history class to buy a nice outfit to wear for the interview. I was really nervous!” A few weeks later, she finally received a call: “Welcome to Pixar.” California here she comes.

“I had never been to California and knew nothing about it, ” she notes. The Mobilian who watched Disney videos as a child on the Gulf Coast would eventually learn all about the animation business while on the west one.

After completing her internship, Hicks returned to Ringling College, and graduated in 2009 with a degree in computer animation, a minor in digital filmmaking, and a job offer from Pixar. She was officially an animator. And just what does that entail?

“We create how characters act and respond to other characters and events happening around them, ” Hicks says. She and 60-plus other animators bring the show to life. It is fun, but don’t try this at home. As she notes, “For every one frame you see in an animated movie, hundreds of people have touched it.” 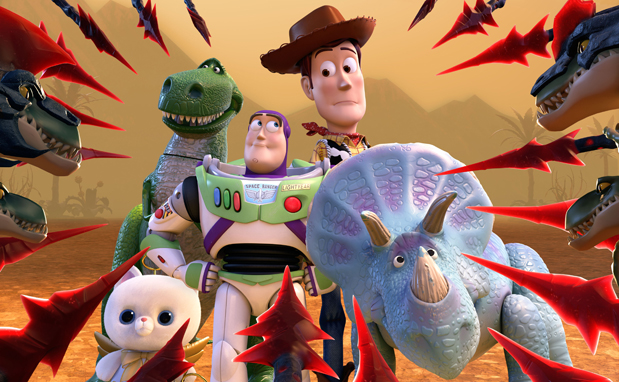 The newest adventure of Woody and Buzz Lightyear, “Toy Story That Time Forgot, ” airs on Dec. 2 on ABC. No doubt Hicks and the California crew will be celebrating this season; digitally animated features take artists years to produce.

From Emeryville, California, Hicks’ workday starts with a check of the “dailies.” The daily is an event where animators report the status of their work, or ‘shots’ to directors. The animation is broken down into acts, sequences, scenes and shots. “A shot is one camera, one take, ” she explains. “It can be one character from the waist up or many characters.” Take “Toy Story” for example: “Say Woody has a scene in which he says something to Buzz. That’s a shot, ” Hicks says. “And then Buzz responds. That’s another shot.” She and other animators are assigned one or several shots, which are digitally sewn together by computers, imagination and talent, in a process bordering the magical.

Her director may say, “This is what I want the character to do in this sequence.” Following his instructions, Hicks and her team members develop their shots and report back. “We add emotion and the results must be just right to fit the scene, ” she says. “A character must express just the right amount of happy or sad, depending on the moment.” She constantly asks herself, “What will it take to make this character real?”

The progression from shots to finished product has some anxious moments. “I am so excited when I am assigned my shot, ” Hicks notes. “But somewhere in the middle of production, you may run into a technical hiccup. The mood isn’t right or I’m not happy with the acting. Then artistic self-doubt sets in and I pout, ‘What am I doing here?’” she laughs. But she works through it. “It’s an organic process to make sure the story is the best possible, ” she adds. “It takes a lot of time and a lot of love, but we take whatever time necessary to get it right.”

When the shots are complete, the work moves up the pipeline to the simulation department. Hair, clothing and other details are added. Final rendering is applied, down to the last frame. It sounds tediously detailed because it is. From script to final release, the production of a feature-length animated film takes about four years.

Hicks’ latest project is “Toy Story That Time Forgot, ” airing Dec. 2 on ABC. The original characters are back, including Woody (voiced by Tom Hanks) and Buzz Lightyear (voiced by Tim Allen). “That’s a challenge, ” Hicks says. “Everybody knows Woody and Buzz. Animators must make the returning characters’ personalities match the audience’s familiarity with them.” But the TV special also presented additional challenges with its new characters (cool but also cunningly deceptive toys) with new personalities to be rendered.

In her free time, Hicks blogs, draws, researches the work of other animators and visits home. “I have lots of family in Mobile, ” she says. “I return for holidays when I can, usually Christmas, Thanksgiving or Mardi Gras.” “I miss how green and soggy Mobile is. I also miss the sound of crickets at night. And I personally feel the seafood is better and cheaper in Mobile than it is in San Francisco.”

She also credits her hometown roots as a crucial part of her inspiration, saying some of her creations are derived from childhood experiences or acquaintances. “There were some special teachers along the way to encourage my artistic abilities, ” she says. “McGill-Toolen and its teachers were very supportive. We had a good art program.”

Hicks loves her work and audience feedback. When “Toy Story 3” was released, she and colleagues visited a local theater, sat on a back row and monitored audience reaction. “It is surreal, ” she says. “Watching people laugh or cry at something we did. I am touched when I hear someone was moved by our work.”