She’s in rough shape, this little community center in Barnwell, over on County Road 3. Her roof is a patchwork of new and rusted sheet metal. The trim white paint on her exterior has cracked and flaked away, succumbing to sun, wind and rain. Inside, chunks of the ceiling have rotted out, leaving holes gaping into the darkness above. She is more than 100 years old, and she looks every bit her age.

But look closely, and there’s more: A sturdy frame. A level foundation. Sunlight pours through newly restored window frames, casting rays onto a smooth wood floor that, despite a few missing pieces, feels strong and even underfoot.

Generations of memory live in this space. Before the Depression, the children of Barnwell went to school here. It’s where children and grandchildren once held weddings, funerals and anniversaries. Over the past century, Barnwell’s tight-knit farming families have gathered within these walls for countless bingo nights, potluck dinners and quilting circles. The community used to vote inside. And now, the most remarkable thing: Though she’s sat dormant for more than a decade, slowly disintegrating and filling up with junk, the Barnwell Community Center is awakening once again.

Over the past year, a dedicated crew of local families have committed themselves to her revival, spurred to action by Hurricane Sally. When the storm clawed its way across Baldwin County in 2020, it tore off most of the community center’s roof, leaving the already dilapidated building exposed to the elements. Water damage took hold with a vengeance, accelerating her decline.

The following spring, at a local kids’ Easter egg hunt, the conversation turned to the sorry state of the building. “We just got to talking and realized, nobody’s going to do anything unless we do something,” said architect and Barnwell native Melissa Nolte, surveying the progress within the partially renovated building. “We decided that we were going to get together and we were going to fix it. I don’t think any of us knew what we were biting off at that moment. We just thought we were going to show up and throw some patches on it and go.”

But now? “I really feel like we have a tiger by the tail,” she said.

There’s more at stake than the collective memory of this rural Baldwin County community. The building is rooted within a larger — and increasingly hard to find — historic tradition. 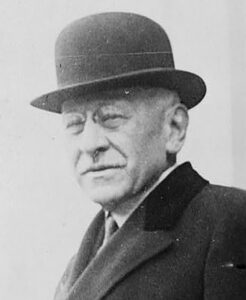 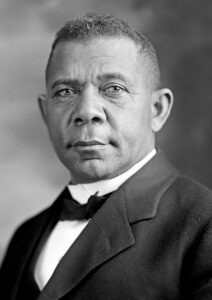 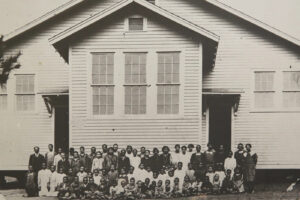 In 1912, Booker T. Washington, principal of what was then known as the Tuskegee Normal and Industrial Institute (now Tuskegee University), pitched a progressive idea to Julius Rosenwald, a new member of Tuskegee’s board of trustees and the president of Sears, Roebuck and Co. The idea that Washington shared was simple, yet profound: He wanted to build safe, clean schools for Black children across the rural South.

Together, the two men launched a school building program that, according to the National Trust for Historic Preservation, produced a staggering 4,977 schools during the first half of the 20th century.

The Rosenwald schools, as they came to be known, were revolutionary in their design. Well-ventilated and filled with natural light, they were laid out with strategically placed banks of windows to reduce eyestrain, with interiors painted in light colors to create bright and welcoming learning environments. In addition to typical classrooms, the schools also included “industrial” rooms where the children learned practical skills such as sewing and technical trades.

In the 1910s and 20s, under the architectural direction of Samuel L. Smith and Fletcher B. Dresslar, the group developed standardized school plans whose designs could be replicated across the South, eventually publishing a catalog of small and large buildings to accommodate the varying needs of different communities.

“Professional educators and cost-conscious school administrators borrowed freely from Rosenwald plans in developing their own state-approved school designs,” wrote Mary S. Hoffschwelle in “Preserving Rosenwald Schools,” a short guidebook produced by the National Trust for Historic Preservation. “They used these plans to build Black schools that did not receive Rosenwald grants and to build schools for white children as well. Consequently, although educated separately, many Southern white and Black children learned in classrooms that looked and felt the same — open, bright, orderly, clean.”

Soon after the people of Barnwell decided to take on the task of renovating the community center, Nolte spent an entire day at the Department of Archives and History in Bay Minette, sifting through old records to find out more about the building. She didn’t even know, at first, when it had been built. “It had been around so long, anybody you talked to was like, ‘it’s always been there,’” she said. “Okay, but it wasn’t always there. Where’d it come from?”

Nolte discovered that there had been an earlier school, called the Meadow Springs school, built for Barnwell’s children around 1906. When the hurricane of 1916 wiped it out, the community decided to build a new schoolhouse on a piece of property about a mile farther inland. The timing of this need coincided with the rising popularity of Rosenwald schools. Thus, the Barnwell community found itself, unknowingly, stepping into a historic decision: The new school, erected in 1918, was built according to the design specifications of Rosenwald Community School Floor Plan No. 20.

The National Trust for Historic Preservation estimates that fewer than 500 Rosenwald schools still stand today. The Barnwell Community Center is not, strictly speaking, a “Rosenwald school,” as it was not built under the auspices of the Tuskegee program or the later Rosenwald Fund. However, as a contemporary of the Rosenwald schools built according to Smith and Dresslar’s plans, the community center nevertheless offers the opportunity to physically step into a piece of the Rosenwald legacy. 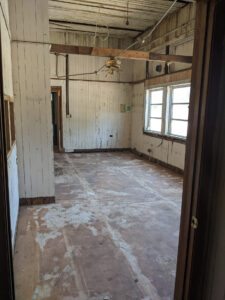 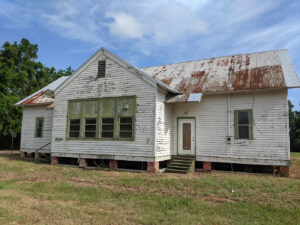 From left to right, repairs are underway inside the schoolhouse. The Community Center as it sits today.

Since that Easter egg hunt in 2021, the pieces of the community center restoration project have fallen into place at an ever-accelerating rate. First, an informal group pitched in their own money to fix the roof damage that Sally wrought. Then they hosted a spring cleanup day, where two dozen community members showed up to haul debris out of the building. In the summer of 2021, they officially banded together as an organization and held a community-wide interest meeting. In November, they hosted their first Community Day, a celebratory event where the group showcased their progress.

During Community Day, “people were just steadily putting checks in our hands,” said organization board member Veronica Bishop. “We’ve had a lot of community support. No one has told us no. We don’t ask for a whole lot, though. We’ve been trying to utilize our resources.”

The first half of 2022 brought a fresh flurry of wins, starting with a $75,000 grant from the county and an official 501c3 nonprofit designation for the Barnwell Community Organization. In May, they held their first official fundraiser, a crawfish derby where they hoped to sell 200 tickets. They had to cap it at 400.

Official renovations began this summer, starting with repairing the foundation and clearing overgrowth around the property. In late summer, the group began repair work on the worst of the building’s walls.

“I didn’t think that we would be this far, this soon,” said Bishop. “I always knew if I ever had a dollar over starvation and everybody wanted to help, we could do it. But the Lord put us together so that we could rally this.”

So far, community members have risen to the occasion, pitching in $40,000 toward the renovation.

“What makes that really amazing is this is not a high-income area,” said Nolte, who serves as board president. “This is a lot of farmers, old families. We have people who are living on minimal incomes, and they will bake cakes for the bake sale on Community Day and show up to make their contribution, or they will buy a T-shirt or they will just show up and give $20 out of their pocket because everybody who’s been here for very long has at some point been to either a function or party here.”

“We’re a small town,” said Bishop. “We’re slower paced. We’re rural. We like the farmland, we like our ATVs. I think that having something like this for everybody to collaborate on, it’s really put some spark into our little Barnwell community.”

The group relies entirely on local volunteers, who come out to the property on weekends to lend their time and skills to the renovation. Bit by bit, they are laboring to restore it to circa 1918, peeling back the layers of change that have crept into the building over the years. Those changes included improperly installed windows that allowed water to seep into the building for decades; interior walls that entombed a Fairhope clay fireplace in darkness; and a kitchen that posed a significant fire hazard.

Fortunately, the board seems uniquely suited to the task at hand.

“We have an electrical contractor who’s on our board and we’ve got a construction contractor. We’ve got a guy who builds windows and custom doors. We’ve got the skilled labor. We lucked out,” said Nolte.

She is quick to credit the many neighbors who have stepped up to support the effort, but Nolte herself is a dynamo. When prompted, she swiftly rattles off the list of meetings, workdays, and planning sessions she attends every month to keep the project on track.

“She doesn’t turn the phone off. She doesn’t stop,” said Bishop. “She probably does it all the way until she goes to bed. Plus, she has a career and a family and a home and a farm that she runs.”

“We all have those,” demurred Nolte.

Bishop pushed back, laughing: “No, not everybody has a farm.”

“We want to build [the community center] back for the next 100 years,” Nolte continued. “It’s been here 100 years. Everything that we are putting back, we want to put back as good, if not better, because we want it to be here in 100 years. You know, I doubt we will be here to take care of it, but hopefully, the next people will not have quite as big a mess to pick up.”

“Even the children in this community already see the value in it,” added Bishop. “They’ve been to our little events. They know what we’re doing here. They’re going to have the same memories that we did. They’ll be passionate.”