Whoosh! Did you hear that? That’s the sound of the ice cream industry going up in smoke. Well, more like a steamy vapor. That’s what happens when LN2 (liquid nitrogen) meets a solid surface and freezes. Now, imagine the surface is mushy ice cream. For nearly four years, this instant freezing method has been steadily gaining the attention of dessert connoisseurs nationwide. And by “attention, ” I mean emphatic gawking. Watching the unique process materialize is nothing short of mesmerizing. It’s the sort of machine-induced chemical reaction that would thrill a mad scientist.

Near the sun-kissed beaches of Gulf Shores, Liquid Freeze is bringing the instant gourmet ice cream phenomenon to anyone with a sweet tooth. Customers may choose from combinations of more than 1, 200 flavors and watch as their orders, one by one, are hit with vaporous blasts of liquid nitrogen, freezing each scoop in seconds.

Owner James Thompson and his wife, Cristol, first encountered this unique preparation method of the timeless dessert on a trip to Boston.

“I had two scoops of key lime pie flavored liquid nitrogen ice cream, ” James says. “That was all I needed. I knew I wanted to be a part of this. We got our first liquid nitrogen tank last September, and for the next couple months we turned our friends into test dummies. I threw free ice cream parties at their homes and surveyed their opinions.”

Cristol, one of three “mixologists” on staff, says using science to create the culinary treat is not only tasty, but also educational. 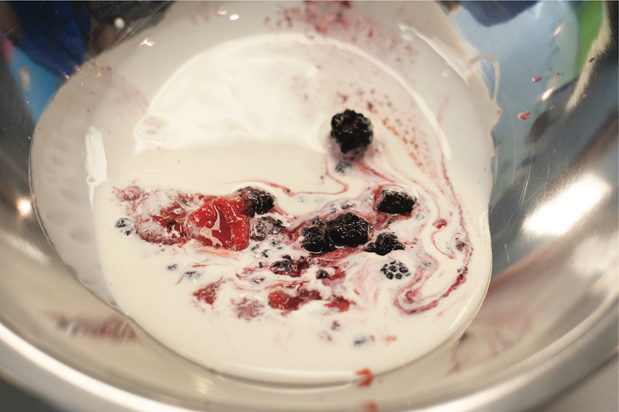 “Mixologists” whip together milky ice cream and yogurt bases with the toppings and then work their liquid nitrogen chemical magic to flash freeze it right before patrons’ eyes. Smoke only adds to the wow factor of the mouthwatering, memorable desserts.

Here’s how the science works. The colorless, transparent liquid form of the element builds up its own pressure within the tanks at about 20 pounds per square inch (PSI). Once poured over the ice cream ingredients in a stainless steel bowl, the combination of vigorous stirring and the negative 320 degrees Fahrenheit temperature of the liquid nitrogen instantly freezes the concoction while keeping ice crystals from forming on the surface of the cream, ensuring that every order maintains its smooth texture. Simultaneously, the liquid evaporates into a gas, creating the cryogenic cloud of smoke.

An average container of store-bought ice cream is loaded with various gums, egg yolks, emulsifiers, stabilizers and other preservatives because it must make a months-long journey from the factory to freight truck to distributor and finally to your home. Ice cream made from liquid nitrogen, a natural element, however, is free from those preservatives.

Cristol explains how the chemical process creates an extra smooth and creamy texture. “Liquid nitrogen flash freezes the ingredients so fast that the order doesn’t have time to expand and harden the way typical ice cream would.” And the equipment makes all the difference. “We use standard 180-liter tanks designed to hold the liquid nitrogen with a unique dispensing system. And, the apparatus on the end of the hose is top secret.”

“The first time I made some, I ran out of liquid nitrogen because I practiced so much, ” says 16-year-old mixologist Emily Branan about the learning process. 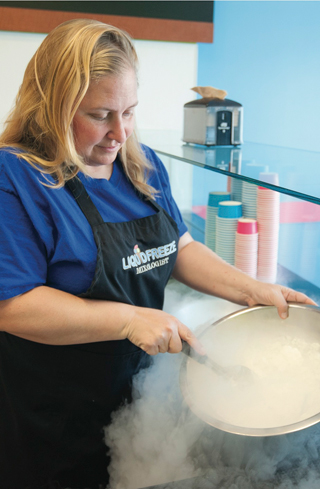 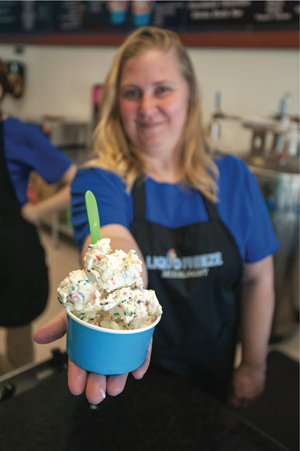 Cristol Thompson and her husband, James, decided to open up their own liquid nitrogen ice cream shop after visiting a similar store on a trip to Boston. Both were instantly smitten with the treat. After taking time to experiment with their own techniques and flavors, the couple introduced the trend to Lower Alabama.

James and Cristol say that the response from customers has been delightfully positive. While the promise of feasting on the richest ice cream this side of the Mississippi may be more than enough incentive to get customers in the door, a cozy atmosphere, eclectic decor, colorful walls and family-driven customer service keep them coming back.

Mary, another patron, mulls over which of the sugary sweet concoctions she should try first. She finally decides on the Peanut Butter Blast. “It is amazing and definitely much creamier than what you would buy at the store, ” she says.