Amid the sounds of SEC football and guffawing laughter, six gentlemen sit around a small patio table. The laughter abruptly stops as a young redhead hurriedly opens and closes the sliding glass door, wordlessly placing a single Styrofoam box in the middle of the table before scurrying away. The men lean in expectantly, brows furrowed, as one of them opens the container, revealing six perfectly cooked baby-back ribs. The men, three young and three greying, each grab a rib and take a single bite, chewing thoughtfully before discreetly scribbling down some notes in silence.

The judging of the Brookwood Riboff contest is serious business.

The annual party, held throughout Brookwood neighborhood in Midtown,  pits neighbor against neighbor to see who can smoke the best barbecue according to a blind taste test. Contestants then bring leftover ribs and a hodgepodge of sides to the “party house, ” where friends and family congregate to enjoy the fruits of these neighbors’ labors and partake in raffles and a silent auctions. The winners (and loser) are announced that afternoon, but the rowdy gathering continues, with Alabama football blaring, well into the night.

The rules are simple: Contestants must have lived in Brookwood at one time, there’s one team per grill, and no contestants can leave the neighborhood once the grilling begins. The friendly and familiar character of the neighborhood is a fundamental part of the shindig’s success. “Most of the young people here are second-generation Brookwooders, ” says cofounder and board member Davis McPhillips. “That’s why last year’s was so great. We got the older generation involved and really combined forces.” And by all accounts, it was certainly more family friendly than in previous years. While it began as a twentysomethings-only event, now it’s a crowd of all ages. This year’s event takes place on October 11 and  promises to be as fun as ever.

The get-together has developed over time, from a random idea on a lazy afternoon to a full-blown charity event attended by hundreds. Since 2013, the beneficiary has been the Leukemia & Lymphoma Society. Says longtime participant Cayce Sherman Jr., “We wanted to honor my dad, Peter Cayce Sherman Sr., and Jeffrey’s dad, Jeffrey Paul Adams Sr., but still come together and have a good time.” And nothing says a good time like 120 pounds of pork ribs. 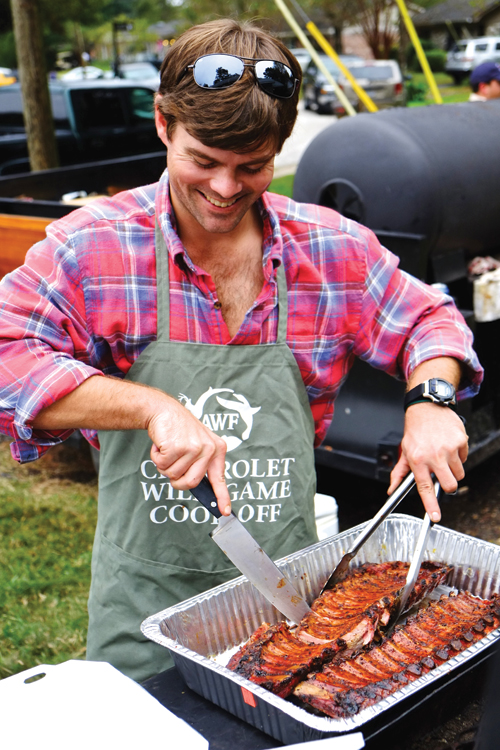 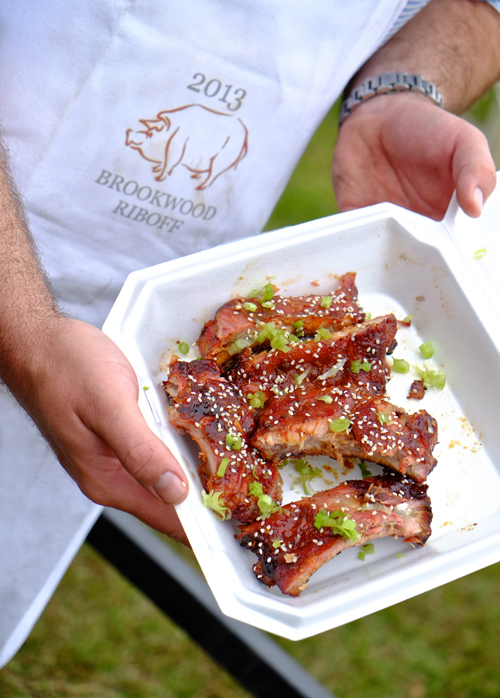 ABOVE LEFT Drayton Arendall slices the grub while a hungry crowd awaits.