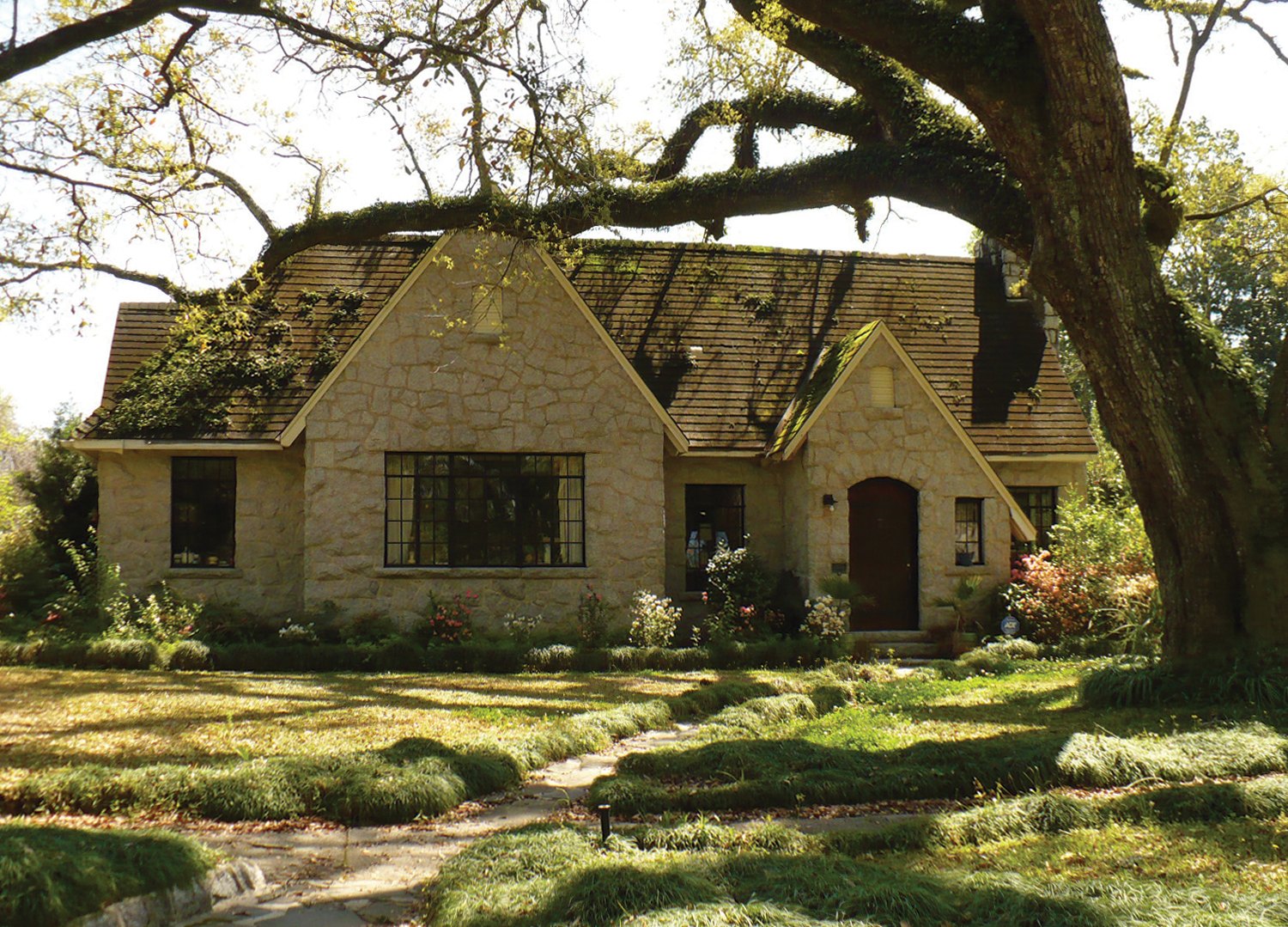 ABOVE Consciously rustic, the rough-cut granite rocks were hewn from the finely chiseled stones that failed the old jailhouse, one of Mobile’s most impressive 19th-century public buildings. They now extend picturesque appeal to the English-Moore House.

From the Latin word for “spoils, ” spolia, the cultural conquest and reuse of artistic elements, has a long history. To draw upon an old and oft-repeated expression — and then massage it a bit — Rome was not built in a day but rebuilt over generations. The columns, capitols, friezes and sculptures of Ancient Rome figure prominently in the Medieval, Renaissance, Baroque and even Fascist epochs that followed.

Like the “Eternal City, ” Mobile has a lengthy history in what we now call “architectural salvage.” Well in advance of the creation of house museums and historic districts, Mobilians held fine craftsmanship, good lines and venerable provenances in high regard. Let us explore the history, mystique and trajectory of Mobile’s fixation on and perfection of reinventing the architectural past in the present. From singular interior and exterior elements to whole buildings, re-creations great and small deserve celebration.

The English-Moore House (pictured above) nestles serenely within Ashland Place’s enviable tree canopy. Arching branches of venerable oak trees, with their lush resurrection ferns, form a halo over the picturesque Arts and Crafts dwelling. The character-defining textured stone walls seem as if they have been there for time immemorial. They were the original facing of the 1929 house, but their existence predates the home. Originally finely cut blocks, the deliciously irregular pieces of rock previously served as the facade of one of Mobile’s greatest lost landmarks — the 1830s county jail.

During the Antebellum era, jails were among the most architecturally notable public buildings in American towns and cities. Mobile’s jail was a monumental Greek Revival building. It stood on Congress Street behind the Old City Hospital, which still stands at Saint Anthony and Broad streets.

When the jail was demolished in the 1920s for an expansion of the Old City Hospital, pieces of the granite, while saved for reemployment, were broken and battered during the demolition. The rocky look appealed to a then-popular craftsman aesthetic, leading to the granite’s reincarnation in a number of grand houses constructed during the boom years of the late 1920s. The English-Moore House is one of at least two known houses to feature materials from the jail. 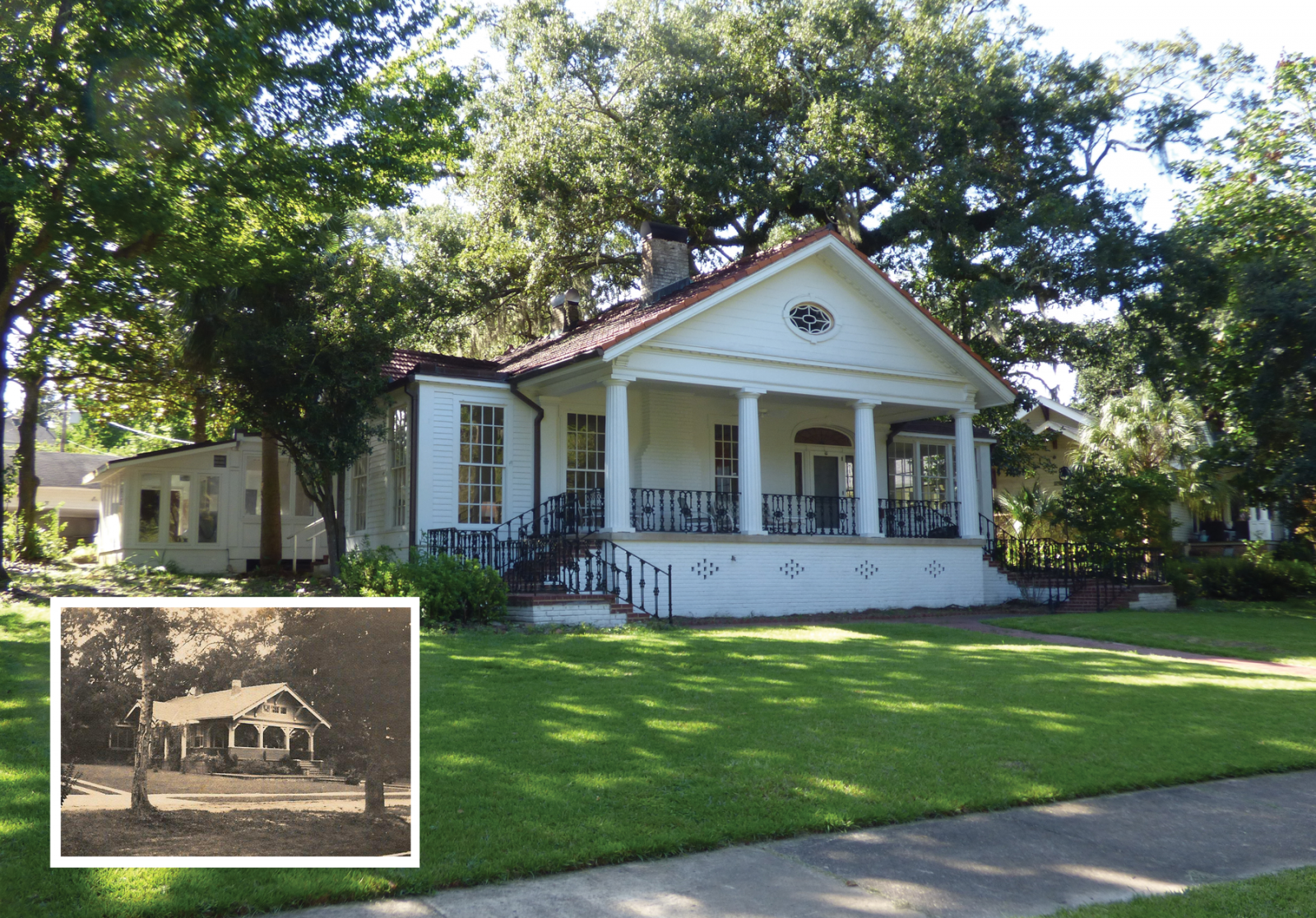 ABOVE The Dunlap-Quina House is one of the oldest houses in Fearnway. As seen in the old photograph, from the collection of David Quina, the house was originally designed as an Arts & Crafts bungalow.

Ranch houses, or “ranchers, ” were the residential rage of the post-World War II housing and baby booms. They satisfied the American dream of a patch of earth, a generation’s preference for suburban existence and developers’ desire for ease of construction.

With characteristic flair, Mobilians enlivened the trend by employing salvaged brick and ironwork in the ranch houses of the 1950s and ‘60s. Particularly notable examples line the curvilinear streets of Delwood, Chateaugay, Knollwood, Spring Hill and Sky Ranch. Some of the the salvaged bricks were covered with burn marks on account of their original task of lining chimneys. Graceful, curvaceous ironwork, its origin often unknown, was at times reconfigured into planters and air conditioner window unit cages.

Existing buildings also benefited from the employment of materials from older buildings. Not too far from the English-Moore House stands the Dunlap-Quina House in Fearnway (above). This eclectic dwelling dates from 1905, but was extensively remodeled in 1938. Architect Kenneth Rabb Giddens transformed the house from an Arts and Crafts bungalow into a classically inspired raised cottage.

Giddens not only employed newly constructed Ionic columns and Egyptian doors on a completely new facade, but he also utilized mantels from older buildings within the house. An 1850s mantel from a Church Street mansion that belonged to the Eichold family dominates the palatial living room, which opens onto the classical portico. The mantel, with its rich carvings, easily ranks among the finest to be fitted into a Mobile dwelling during the Antebellum epoch. Arched mantels, as well as bronze gasoliers, made their way into other homes constructed in the 1900s and after. The Dunlap-Quina House’s reinstallations took it to a new, sophisticated level. 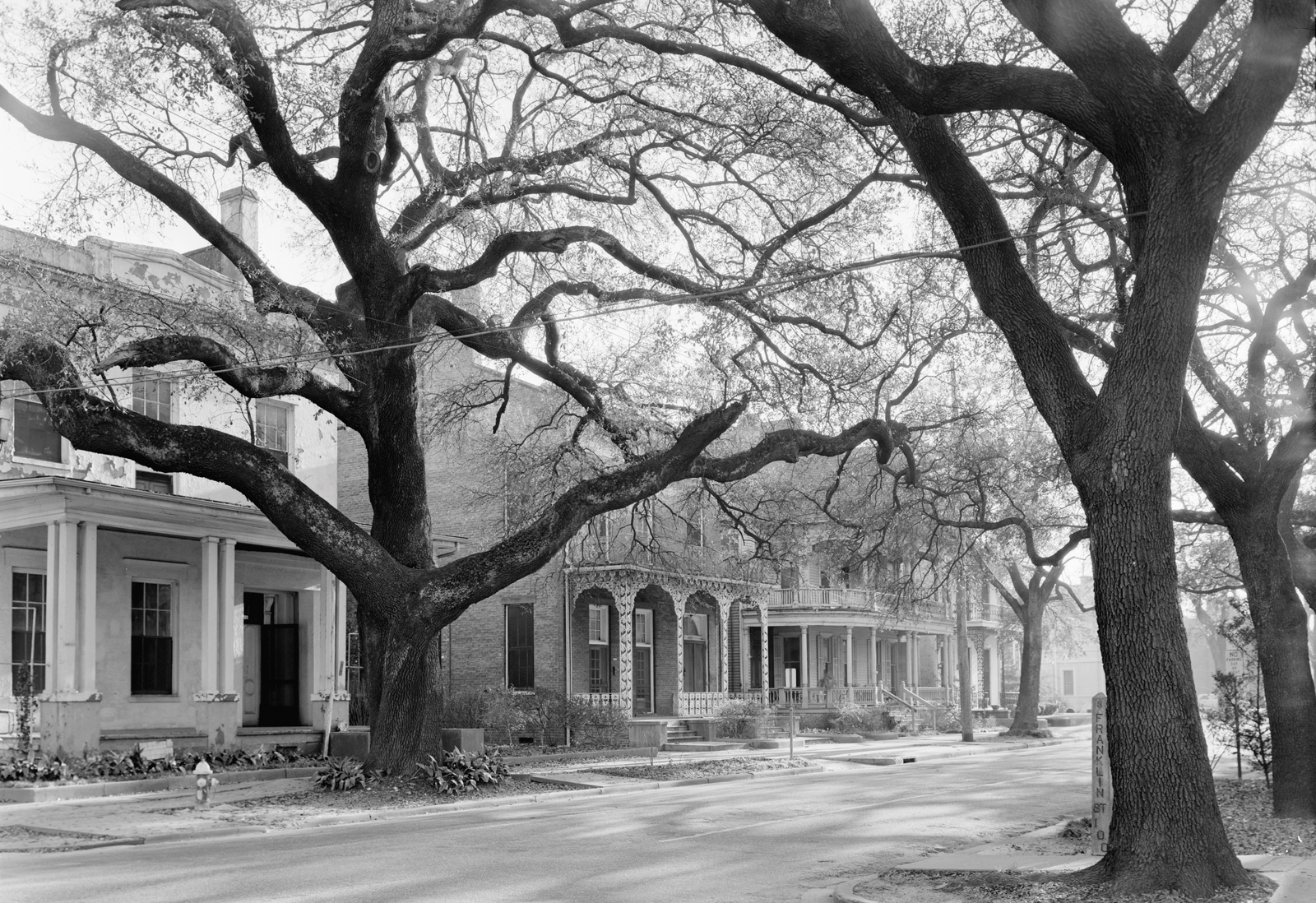 ABOVE Artist and society figure Marian Acker Macpherson described Church Street as the most aristocratic of Mobile streets. The Eichold House (second from left) ranked among the most impressive. Mantels from this dwelling were relocated to the Dunlap-Quina House.

Increasingly, relocating the parts of a larger whole was not the only course of action for architectural salvage. As the preservation movement developed, entire buildings threatened with demolition were disassembled and relocated. The Marx House, for instance, was deconstructed on Church Street and reconstructed on the University of South Alabama campus. Built for the grandfather of playwright and novelist Lillian Hellman, the Marx House represented one of Mobile’s most mature side-hall-with-wing dwellings, the favored dwelling type of the civic-commercial elite from the 1850s through the early 1870s. There once existed over 600 of these Mobile-specific houses. Featuring a side hall with two rooms to one side and dining and service wings to the rear, Mobile side-hall-with-wing houses married grandeur and practicality; high ceilings, central halls and windows on more than one side were all meant to help Mobilians beat the heat.

Sadly, there are currently less than 40 of these Mobile-specific houses remaining. Vast numbers were lost to wrecking balls in the 20th century. The Marx House was condemned for construction of the Wallace Tunnel and Interstate 10, but the City of Mobile, the Mobile Historic Development Commission and the University of South Alabama partnered to save the house. It and two other Mobile buildings, the Toulmin House and Seaman’s Chapel, were relocated to the then-young university campus in 1968.

In some extremely notable instances, buildings or portions of buildings have been relocated from even farther afield. The Rutherford House in Spring Hill (above) is copied from a Colonial-era dwelling that stood in North Carolina. Pristine without and a time capsule within, the residence is remarkable. The late Dr. Charles Rutherford Jr. and his wife Harriet, or “Scoot, ” secured the hand-carved woodwork gracing the interior from the lost dwelling prior to its demolition, thereby saving the superb artisanship for posterity. The interiors are some of the most impressive examples of 18th-century craftsmanship in the Deep South. 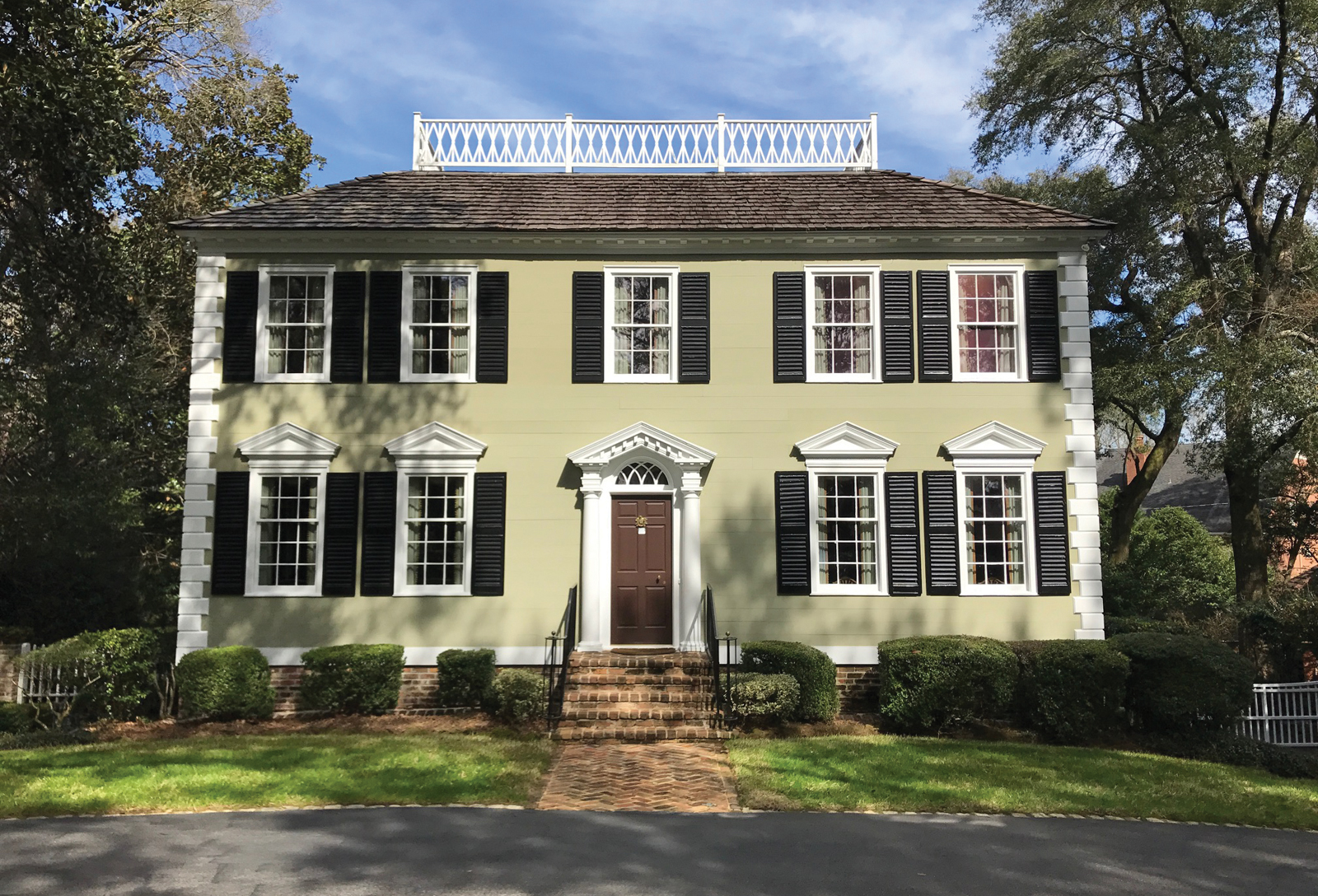 ABOVE Situated in the heart of Spring Hill, the Rutherford House is Colonial Revival in its purest form.

In more recent decades, Atchison Home, Charles Phillips Antiques and Architecturals, Crown & Colony Antiques, and RF Architectural and Garden Antiques procured, shipped and marketed architectural fittings from continental Europe and Asia. With an unrivaled trans-European heritage, an affinity for all that is European is inevitable. Our unparalleled colonial heritage also brings with it an affection for sister cultures of the colonial sort. Be the expression Louis XVI, Empire or Vietnamese-Colonial, the flair and flavor builds upon generations of appreciation.

The collective history of Mobilians as a people is truly inspiring. The history of spolia in Mobile affords a telling insight into who we are and where our city is going. From parts to whole, from demolition to preservation and now community revitalization, there is so much we can learn from and celebrate in the never-ending tale of architectural salvage.

Cart Blackwell is an architectural historian and a curator at the Mobile Carnival Museum.