The dining room is empty. Vacant tables and chairs patiently await the flurry of dinner at Lafayette’s Restaurant with pristine tablecloths and dishes set out, all ready for guests. Hidden from the quiet of the main restaurant, Craig Barbarin Jr. is in the kitchen, but he’s not prepping for hungry diners soon to come. As part owner of Port City Preps, Barbarin has tapped a previously untouched market in the Mobile Bay area: delivery of homecooked meals.

“Everybody wants to be healthier, ” Barbarin says. “But a majority of people feel as if they don’t know how. We can fill that gap and make it so that’s not an excuse. We have the food taken care of. Ignorance isn’t an option anymore.”

It’s true: Between the overabundance of “health tips” out there and just trying to fit everything into your day, spending time cooking healthful meals gets pushed to the back burner.  Literally. Barbarin explains that’s what drove him to create Port City Preps. He takes the frustration out of cooking wholesome and healthy meals.

Barbarin grew up watching his father rise through the ranks of New Orleans restaurants, starting as a maître d’ at Brennan’s and Copeland’s. The Barbarins moved to Mobile when Craig was 12, and his dad opened Lafayette’s. Barbarin says, “I have a real New Orleans South cooking concept that I learned from my dad.”

He’s been on the line with his dad since he was a teenager, but even before then he was eager to impress with food. Now sitting by the bright windows in the quiet dining room, Barbarin recounts a childhood story. His sister had just returned from Girl Scout camp and was showing off a few campout recipes she’d learned. “She’d learned to cook chicken in a pouch or something like that. And they learned how to cook some soup, and the first thing I remember cooking was taking cans of tomato soup, cans of beans, corn, and I would always make these soups, just making random soups at 11 or 12 years old, ” Barbarin shares with a nostalgic laugh.

By 2012, he had his personal trainer certification and spent the next five years as a trainer — hence where his healthy know-how comes from. He noticed that his clients were working out but not eating well afterward. What began with cooking meals for a handful of his training clients eventually morphed into a business all its own. Along with business partner, Keefe Ollis, Barbarin brought Port City Preps to life. 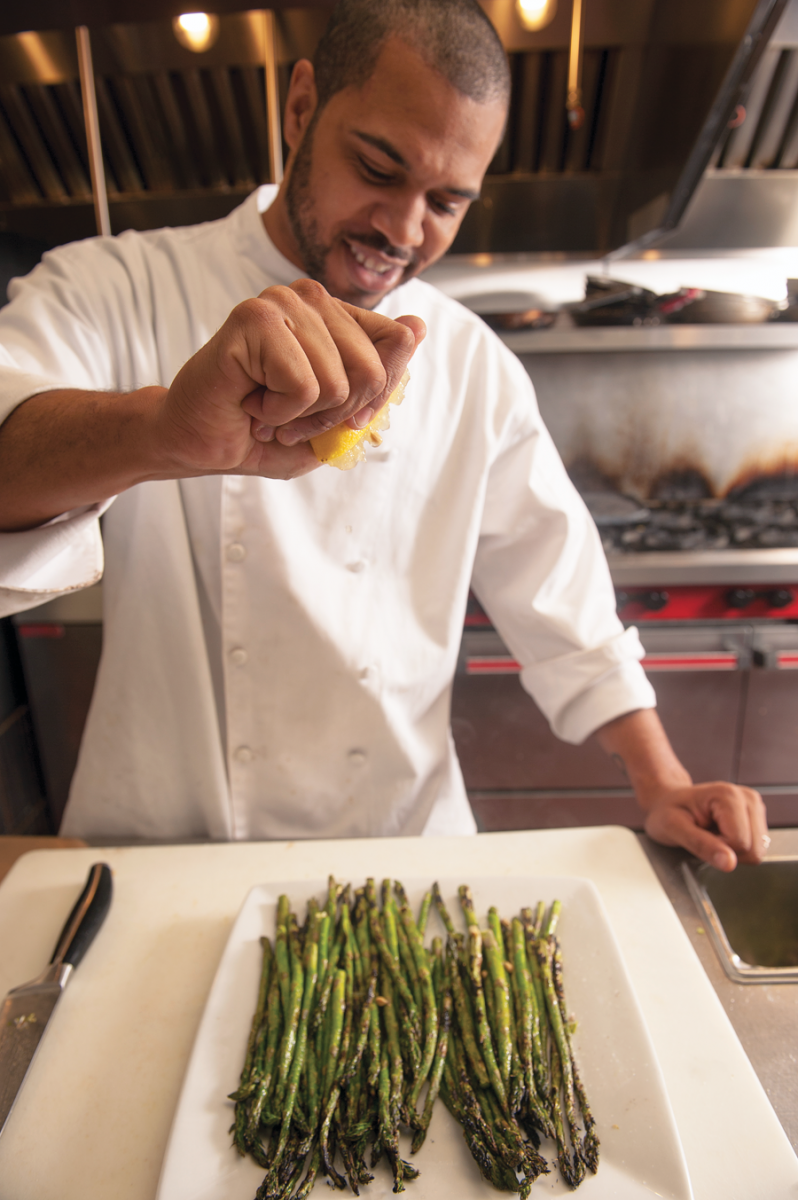 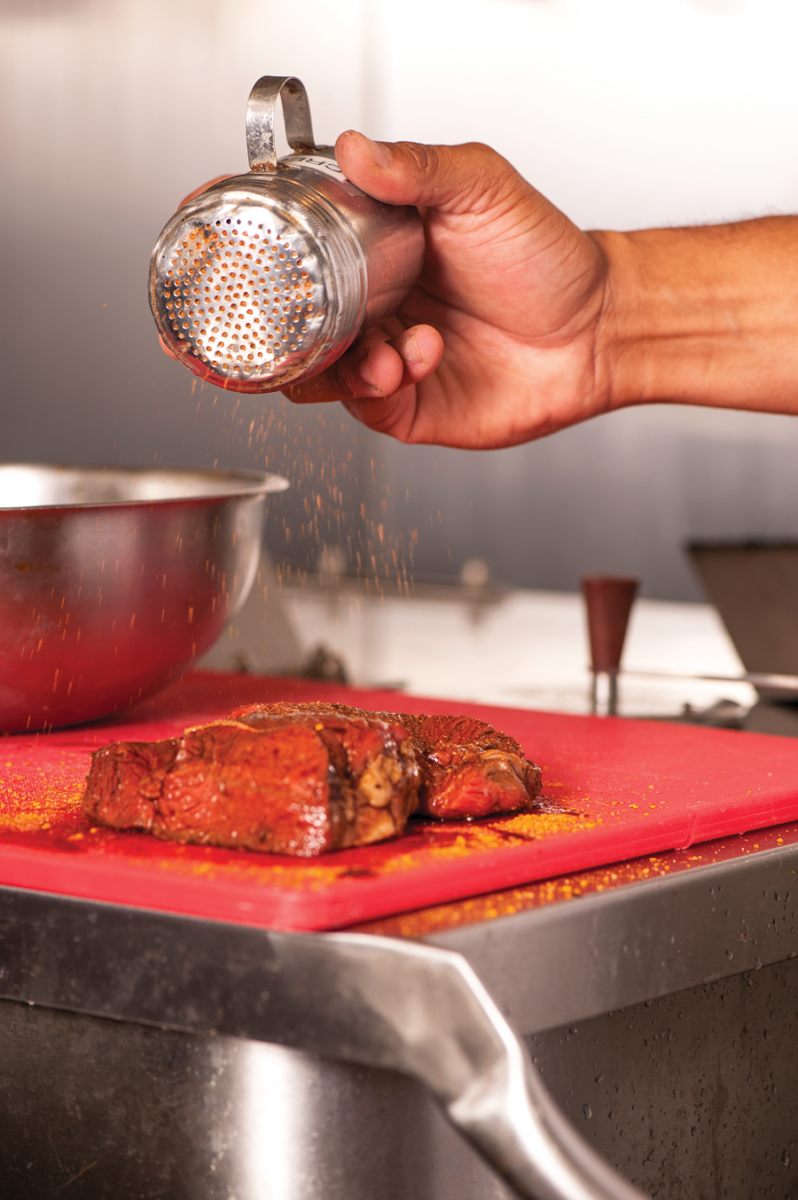 The process is simple: Log onto their website, build your ideal meal (choose a wholesome protein, filling veggies, smart carbs and tasty seasonings) and voila — you’re done! And keeping every component separate and interchangeable means boredom in eating is never a worry.

Barbarin and Ollis didn’t want to box customers in with permanent, set options. “We have everything, including seasonings, listed separately to give options and the variety to mix it up how they want, so there’s that leeway, ” Barbarin explains. “You know everything on this menu is good for you.” (Fun fact: there are 5, 292 different possible combinations using their menu! Don’t worry though: There are a handful of suggested combos if you just can’t decide.)

Beyond that, everything on the Port City Preps menu is whole food. Gone are the additives and filler that have taken over the food market. Barbarin and Ollis focus on providing tasty food that is also good for your body.

Ollis adds, “Convenient food isn’t usually very healthy. With our stuff, you pull it out, pop it in, and you’ve got a healthful meal that’s quick and prepped for you.”

And Port City Preps doesn’t stop at just cooking your food for you. They also post quick videos on their Facebook page, walking newbies through cooking basics from a simple omelet tutorial (including how to avoid destroying your breakfast when flipping) to recipes for easy morning energy bites. And unlike most delivery services, they have no set delivery radius. Stationed in Azalea Manor downtown, Port City Preps serves clients in Mobile, Fairhope, Spanish Fort and even Citronelle and Saraland. Distance is no matter; they care only about spreading good-for-you food that customers will be excited to devour. “Delivery is $0.50 per mile, and if you will pay it, we’ll deliver to you, ” Ollis shares.

When asked what advice he would give to those hoping to embark on a healthier journey, Barbarin explains, “A big thing is learning to read labels. People see ‘low fat, ’ but they don’t notice the increased sugar or sodium. The amount of calories in food doesn’t determine how good it is for you. We have a lot of people begging us to put calorie counts on our menu, but it’s more about what’s in the food.”

Their favorite things to eat from their menu? “The steak, easily, ” Ollis says without hesitation as they both laugh. Barbarin agrees, adding, “My wife really likes the salmon and sweet potato mash.”

Healthy is a lifestyle, and it starts with exciting, flavorful, wholesome food. And Barbarin and Ollis are absolutely ready to deliver.

If you’re ready for a taste, visit portcitypreps.com to place your order.