Ryan and David Tillman are two brothers bringing their own version of big barbecue taste to Cotton State, the tiny pocket of a restaurant that they own in the heart of Downtown. The casual, comfortable eatery opened in April 2013 and does brisk business serving weekday lunch. Currently, Cotton State fills up quickly with only 28 seats, but service is fast and friendly. The menu is straightforward, nothing fancy, but mighty tasty nonetheless – and a dandy bargain with every item at $7 or less.

So, what sets their fare apart from the rest? Cotton State thinly slices their meats (pork, chicken and beef brisket) instead of more expected pulled or chopped preparations. They also serve their sweet, tangy, smoky sauce on the side. “Barbecue has been around forever, but we are creating it in nontraditional ways. We put barbecue on nachos, fries and baked potatoes, and we don’t offer potato salad, baked beans, pork plates, ribs etc., ” Ryan says. But, Cotton State does have good coleslaw, chips and a side salad. They serve dogs as well, using smoked Conecuh sausage. He says the pork sandwich, seasoned fries and sweet tea are their best-selling items. If you aren’t hankering for pork, there are two styles of chicken salad and a turkey
and Swiss on sourdough to round out the selections. For dessert, try the sweet, satisfying “Moon Drop” banana pudding made from their mama’s recipe (a nod to the New Year’s Eve tradition in Downtown Mobile). The brothers, who used to own and operate Tilmo’s BBQ in West Mobile, both do the cooking at Cotton State. They have plans to expand the dining area in the near future to double their seating and add a salad bar.

Cheese Rolls
The golden, crisp fried wonton exterior encases gooey, molten cheese with a snap of jalapeño in this clever cross between an egg roll and a fried cheese stick. Four rolls are served with a sidecar of marinara sauce.

BBQ Pork Sandwich
A hefty pile of tender, savory, smoky pork slices atop a warm, toasted sesame seed bun comes with a side of their signature sauce and a heap of hot, salty seasoned fries. 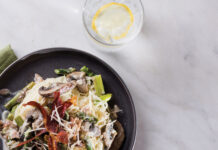