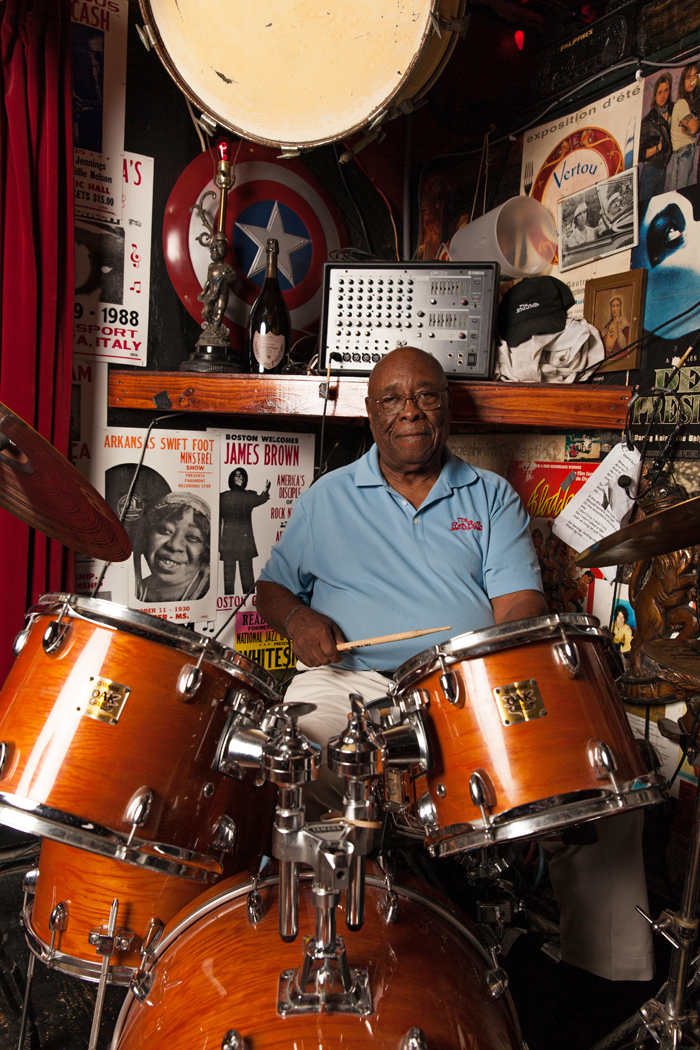 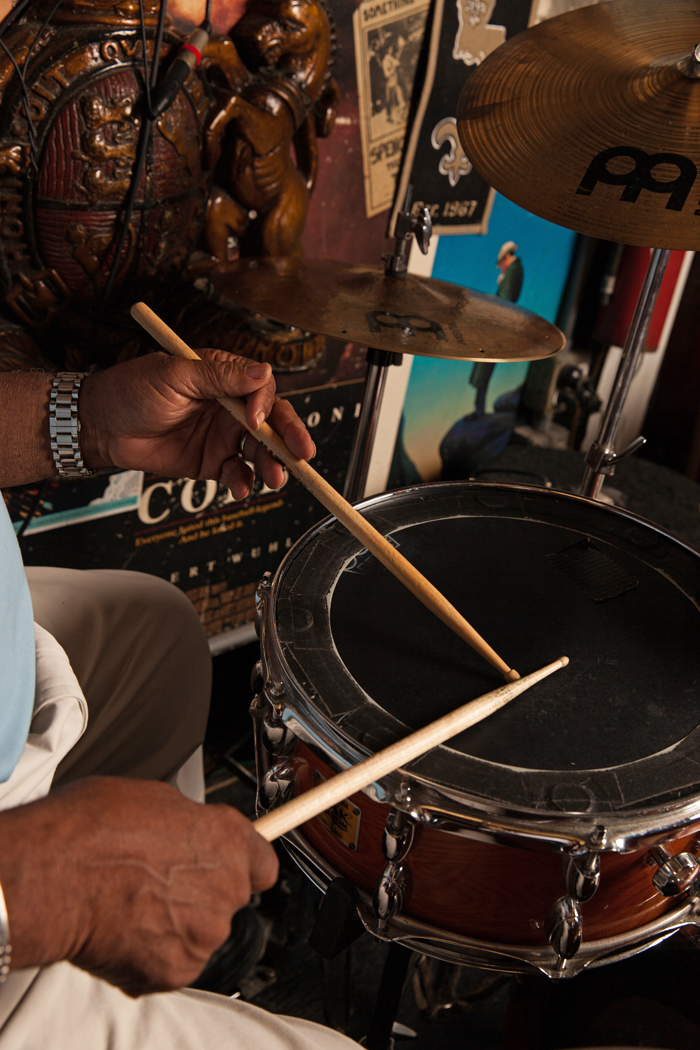 ABOVE Starks says God has blessed him with the gift of drumming, which he’s used to bring people together his entire life. “If I can sit down behind the drums and get you to tap your feet or shake your butt, I got you.”

We all know the feeling: Leaning against a cold metal barricade in February, watching a marching band sparkle and slide down a Mobile street. It’s the brass instruments that keep the melody, but it’s the drums – those that rumble in your chest – that proclaim it’s Mardi Gras.

He might not have known it, but funkmaster James Brown owed a lot to Mobile Mardi Gras. After all, it was at a parade in 1952 that one of his talented drummers, John “Jabo” Starks, was first captivated by the instrument. “When I was in the seventh grade, I heard this drummer at a Mardi Gras parade. I was listening to the band march past, and you could tell when that drummer stopped playing and when he started playing, he had that much command over the band. I must have walked two miles with that band, watching and listening to him. And I made up my mind and said, ‘I’d sure like to be able to play just like that.’”

Now, 63 years after that parade, Jabo Starks and I settle into a booth at the Boiling Pot on Airport Boulevard. Between pauses for fried catfish and hushpuppies and laughter, Starks explains how a kid from Mobile, without taking a single lesson, became one of the most influential drummers of his generation.

“People tell me we were poor back then, ” Starks says. “We were? I never knew that.”

Starks’ voice is deep and smooth, but his laughter is contagious. “There were some things you could do to make yourself some extra money, ” he says with a chuckle. “When I was 12 or 13, I’d catch a bus to Baldwin County during the summer months and pick potatoes for a day or two. You could always bring some home, so Mother would take them and boil some with green beans or slice ’em real thin and fry ’em.”

Starks was born in 1938 in Jackson, Alabama. He grew up in Prichard but went to high school in Plateau, near Chickasaw. “Just before my freshman year, Vigor High School was built, but at that time it was segregated. It was six blocks from my house, but instead I had to catch the bus to go to school at Mobile County Training School.”

He was one of five children in a household with “a lot of love” and a lot of music. “I listened to gospel and the blues.” I ask him which blues artists he listened to: “All of them.”

Besides the family windup record player, one instrument on the Starks’ property always drew attention: “In our yard, we had an old piano that people would come by, sit down and start playing on, and we’d listen to them. I learned a lot from listening – ’cause I’ve never had a lesson in my life.”

After graduating from high school in 1955, a young Starks met and played with some of the biggest names in blues and R & B at the legendary Harlem Duke Social Club in Prichard. “John Lee Hooker, Smiley Lewis, Gatemouth Brown, Big Mama Thornton – I played behind a lot of blues artists in Mobile.” The club, which burned in 2012, was part of the “chitlin circuit, ” a series of venues across the segregated South where black entertainers were safe to perform. “If you came to Mobile as a black artist, you played the Harlem Club.”

Years of listening, creating makeshift drum sets and intensely practicing began to pay off for Starks. “My first drum set – well, if you can call it a drum set – was a bass and snare drum tied to a chair and cymbals on a dinner stand, ” he says with a laugh.

At this point, I take my first misstep. “So, tell me about your path to professional drumming.”

Starks, with the seriousness of a scolding teacher, firmly replies, “Don’t use that word.” Oh no, what did I say?

Despite my faux pas, he continues the story. While playing Mobile’s club scene, Starks was invited to hit the road with smooth-singing Bobby Bland. “At that time, the three most recognizable R & B artists were Ray Charles, Lloyd Price and Bobby Bland. I threw my stuff in a five-and-dime plastic bag and caught a bus to Houston. That was it, man.”

The year was 1959. Although he maintains that playing in Bland’s band was one of the biggest joys of his life, Starks quickly learned that life on the road for a black group during segregation wasn’t always pleasant. “Sometimes, if we played a certain town, we’d have to drive to the next town to find a hotel where we were allowed to stay.”

“Oftentimes we couldn’t walk into restaurants, ” he remembers. “They would have a ‘colored only’ window on the side of the building where we would be served, and we’d eat in the car or on a bench outside.” This sparks a memory from his childhood: “I once asked my mother, ‘Mama, what’s the difference between colored water and white water?’” He remembers that she just shook her head.

“People ask if I’m bitter about segregation and things that happened. Why should I be bitter? I don’t have time for small-minded people, ” Starks says. “I learned that at an early age.”

From 1959 to 1965, Starks played drums on some of Bland’s biggest hits: “Turn on Your Love Light, ” “I Pity the Fool” and “That’s the Way Love Is.” As Bland’s success grew, James Brown came calling. “Every time we’d play on the East Coast, James would send someone asking me to join his band.” Starks initially refused the invitations, but when Brown offered to double Starks’ salary, it was too good of an offer to pass up, especially once he was supporting a wife and baby.

“I played my last gig with Bobby Bland outside of Jackson, Mississippi, packed up my stuff and called James Brown.”

Gigging with the Godfather of Soul

“James Brown was funk personified, ” Starks says. “I’d say that we were friends, but it was more of business relationship.”

I begin to wonder if people at neighboring tables can overhear our conversation. If so, they probably assume they heard wrong.

“Guys in the band would get fined 50 to 75 dollars a night, ” Starks explains. “If he caught you not paying attention during a show, he’d fine you.” Some members had trouble coping with James’ tight control of the group, but Starks says he never got fined. “Sometimes James would miss a change or a cue, but I wouldn’t. He’d turn around and say, ‘You got me, Jab!’”

When it came to the studio, Starks says he never liked recording with Brown. “We never had studio time during the day, ” Starks says. “We would go in at six or seven at night, wait two hours for James to show up, and then we’d work up a sweat like we did on stage and play the song over and over and over.”

I ask if Brown was a big partier. “I don’t know, ” Starks says. “Nobody partied with James. He didn’t fraternize with the band.” But he assured me, “When you finished watching a James Brown show, I can tell you one thing: Your money was well spent.”

Those 11 years spent drumming for James Brown, from 1965 to 1976, were some of the most celebrated of Starks’ career. He and drummer Clyde Stubblefield (Brown liked to have two of each instrument) are widely considered the pioneers of funk drumming. Starks’ drumming can be heard on some of Brown’s biggest hits, including “Sex Machine, “The Payback” and “Super Bad” (among many others).

And Starks’ legacy lives on. Thanks to hip-hop and the technique of making instrumentals with old funk samples, Starks and Stubblefield are the most widely sampled drummers in history – a point of both pride and resentment; he says there’s not enough recognition for these samples. “The least they could do is say where they got them from.”

When Starks decided it was time to move on from playing for James Brown, he went from one music legend to another: B.B. King. How did it compare to playing for Brown? “It was completely laid back. We had a lot of fun laughing and talking. B.B. rode the bus a lot of times. If James got on the bus, he rode two blocks and got off ’cause his car was right behind us, and he’d go to the airport.”

Starks says that transition from funk drumming to blues drumming wasn’t drastic. “To me, everything stems from playing the blues anyway. With James, everything was up-tempo and moving. Blues was moving, but you played like you were swinging, ” he explains. 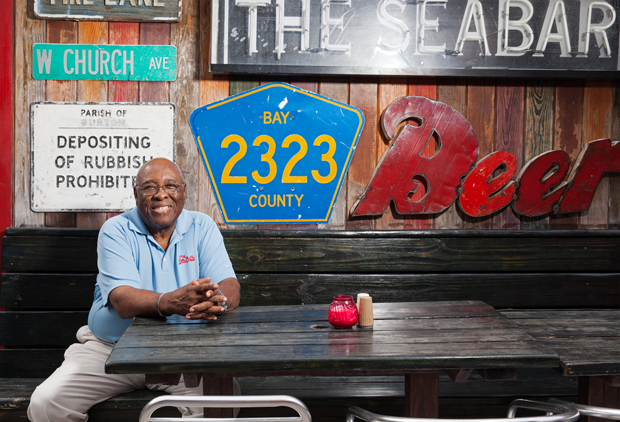 ABOVE Starks plays five nights a week at The Red Bar in Grayton Beach, Florida. At nearly 77 years old, Starks says age hasn’t affected his drumming. “You learn little tricks to help you conserve over the years. I don’t flag at those drums like a heavy metal drummer, but everything that he’s doing, I’ve got a way of doing it.”

Waiters and waitresses at The Red Bar in Grayton Beach can’t help but educate their customers on the resume of the unassuming drummer in the Red Bar Jazz Band. “I try to tell them, ‘Don’t be saying all that, ’ but they do.” This is Starks 18th year playing at The Red Bar, a gig he holds down five nights a week; he returns to Mobile on Sunday mornings to play drums at his church.

I ask Starks if he could live without his drum set. He takes a long pause, gives me a funny look and says, “No!” He says as long as the Lord gives him strength to play, he’s going to keep playing. “When I’m playing music, man let me tell you one thing: there ain’t nobody in the world higher than I am. I get so high playing music it scares me.”

Toward the end of our interview, I take my second misstep of the day. I ask, “In your opinion, was B.B. King the greatest blues guitarist who ever lived?”

“I don’t like using that word [‘greatest’]. I think that’s an insult to the music world. I’ll never let people say that about me. I’ve made a contribution to the drumming world. I know I’ve done that.”