That’s not to say they’re incapable of losing fights — just that losing one is not an option. Because wherever there’s a cop, there’s a firearm, and an incapacitated cop is likely to have his own weapon used against him or his fellow officers. So, cops can’t lose fights.

That four-word mantra from the police academy hit Mark Johnson with nearly the same force as the punches that rained upon his face and body one night on the job. It was an hour before dawn on Christmas morning, and Johnson was in a fight for his life against a man he had caught attempting to steal a car. Johnson didn’t even know if his frantic radio calls for backup had made it out over the air. As far as he was concerned, he was on his own.

“Before I knew it, I stumbled and fell backward and he was on top of me, ” Johnson remembers. “And then I felt him tugging at my gun. And I thought, ‘Wow, this guy wants to kill me.’”

When Johnson had first entertained the idea of quitting his job as the executive director of the United Way of Southwest Alabama to become a rookie cop at age 50, his wife Nancy was beyond skeptical. “Mark, you’re not a natural warrior, ” she told him.

But as the suspect struggled to free Johnson’s Glock from its holster, something snapped inside the grey-haired police officer. “Whatever little natural warrior there is in me came out, and the adrenaline dumped. By the time my backup arrived, I had him tased and cuffed. We were both just bloodied because we had ground each other’s faces in the asphalt of the parking lot. That was kind of a turning point for me. Because I realized then that one-on-one I had done alright.”

On the morning we meet, Johnson answers the door of his home dressed comfortably in jeans and cowboy boots. It’s hard to imagine this handsome man in a police uniform, patrolling Mobile’s streets in the twilight hours and wrestling criminals in cold parking lots. He steps around the toys on the kitchen floor to pick up his granddaughter and balances her on his knee. He is making the final preparations for the February release of his book “Apprehensions & Convictions” about his adventures in law enforcement, and indeed, today he looks more like a writer than a retired cop and detective.

A Case of Identity

Johnson grew up mostly in St. Louis,  but when it came time to go to college, he couldn’t get far enough away. “I kind of hated St. Louis the first four or five years I was there, because I was not ‘Old St. Louis, ’” he explains. “My classmates had been going to private school since kindergarten and lived in the same neighborhoods, and I lived out in the sticks.”

He was lured by the idea of the West. “My heroes have always been cowboys and cops, ” he admits. He ultimately attended the University of Colorado Boulder, nearly 1, 000 miles away from St. Louis and in a state where the drinking age was only 18. “I discovered the magic elixir that is alcohol. Everything changed from Jekyll to Hyde when I went to Boulder.” In college, Johnson no longer felt the need to be a people pleaser and began a long and difficult journey of self-discovery. “I had been a straight arrow, an Eagle Scout, was active in church, on the honor roll, a football letterman, and it still didn’t seem to be enough to please my father.”

A college counselor suggested to Johnson that his personal struggles might revolve around the mysterious identity of his birth parents. In retrospect, Johnson, the product of a confidential adoption, seems to agree with that counselor’s assessment. “Not knowing [the identities of your birth parents] isn’t healthy.”

It would be several years before he learned the circumstances of his birth, a dramatic journey that he details in his book and that helped him corral some inner demons. He shares, “It brought enough peace to me to start getting honest with myself about my drinking and wanting to do better in my life. So that’s when I sobered up.”

After a parade of odd jobs (as a cab driver, truck driver, salesman), Johnson caught a break when he was hired as public relations director of the Pikes Peak United Way, a branch of the United Way of America nonprofit organization responsible for pooling charitable resources in local communities. “It was something bigger than me that I felt passionate about. At last, I had found a way to make a difference.” 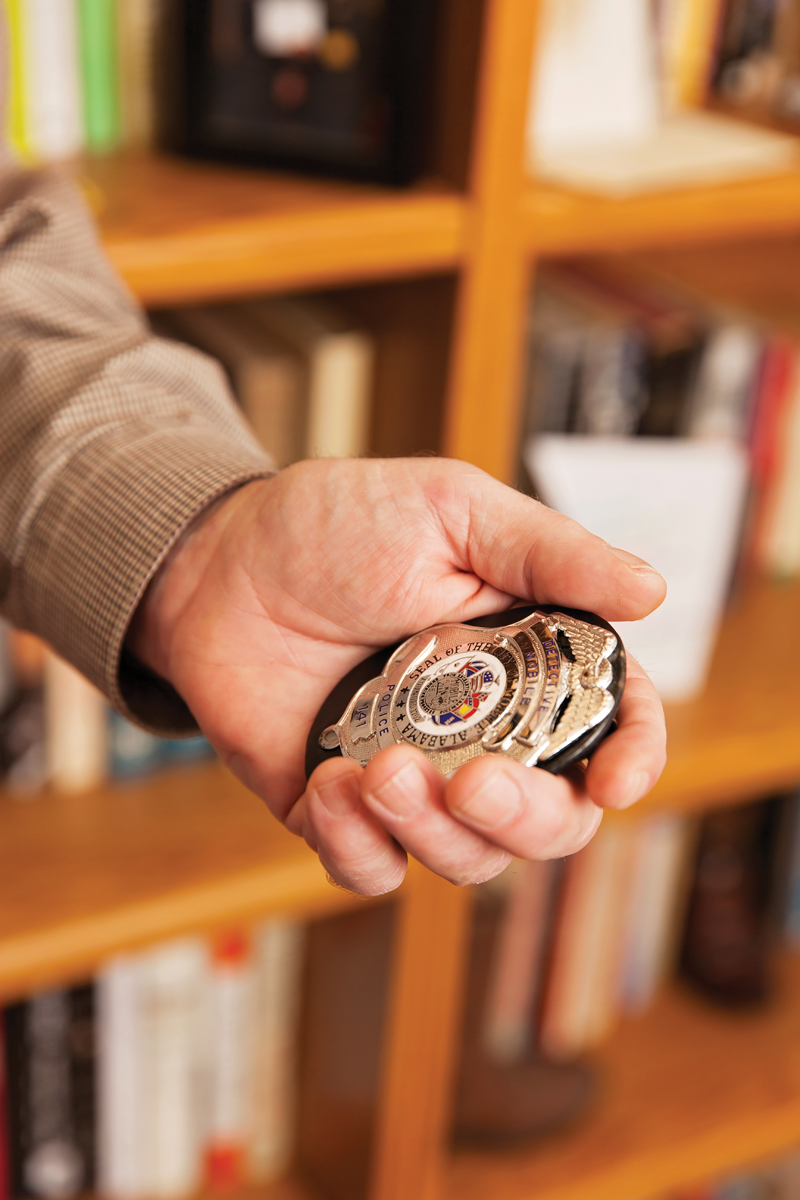 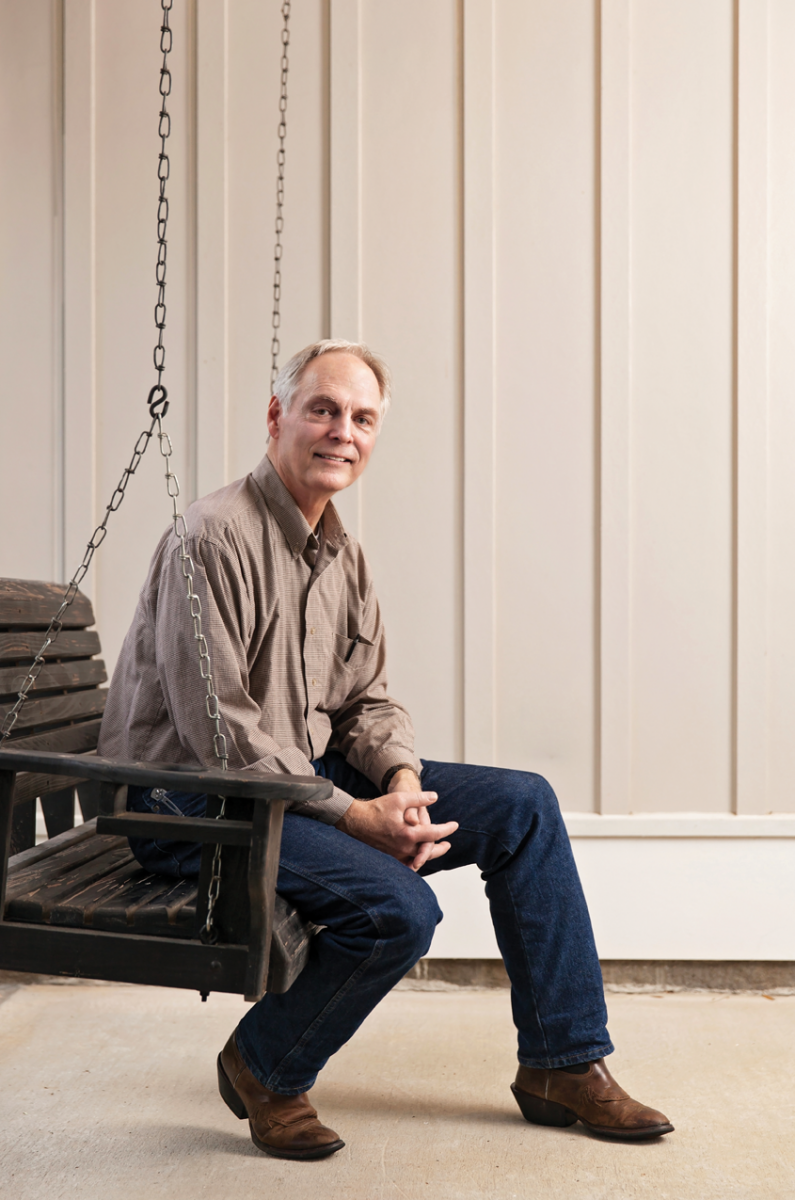 Johnson holds his police badge with pride. “People in Mobile should be proud of their department, ” he says.

More than two decades later, Johnson, the executive director of the United Way of Southwest Alabama, sat in his Mobile office and stewed. Over the past seven years, he had done well at the helm; the branch had consistently surpassed fundraising goals under Johnson’s leadership, but he was growing increasingly frustrated.

“I started getting frustrated with some of our agencies, the donors, the newspaper, the TV people, the city council and the mayor, ” Johnson says. “And I started to realize, ‘It’s not that all these people are screwed up. It’s probably me.’ It was my ego that was the problem.” He began entertaining the idea of changing careers. While the jump from nonprofit exec to keeper of the peace may seem expansive, John-son chose it for a specific purpose.

“I thought being a cop would be less political. It’s just a guy on a beat fighting bad guys. It would be simple; it would be pure. I wouldn’t have to worry about boards and agencies, and I would be helping people.”

Johnson addresses the obvious. “I was 50 years old. That was the first hurdle.”

I ask him what his wife Nancy thought of the idea.

Despite the dangers and significant pay cut, Johnson eventually convinced his wife and the Mobile Police Department that he was worthy enough to wear the badge. “I kind of nursed this fantasy that I would go be a cop for five years and that would inform me to be a better United Way executive. The thing is, after five years of being a cop,  I loved it and never looked back.” 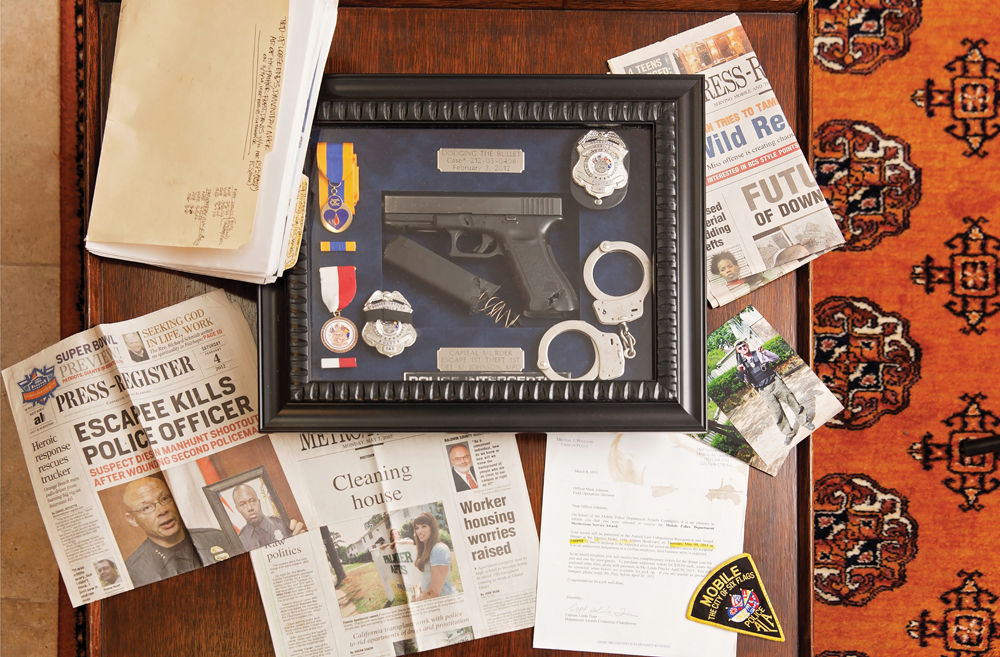 “Once I got over my pretentions of being Dirty Harry, I became a pretty decent cop, I guess, ” says Johnson. In 2012, he was involved in a much-publicized shootout with an escapee, an incident documented in this display case.

Joining the Boys in Blue

“It was extremely humbling, ” Johnson says of his first year on patrol. “I went into it thinking, ‘I’m going to be the best cop they ever had.’” Using his experience from United Way, Johnson thought he could combine policing with his knowledge of social services and philanthropy to really help people. “But law enforcement and philanthropy are not the same at all, and you can’t really combine them.

“I had to toughen up and smarten up, ” he summarizes. “There are snap judgments that you have to make, and it’s often life or death. Even sizing up a guy, I was looking for all the wrong signs. How you size up a threat on the street as opposed to a threat in the board room is completely different.”

Despite the predictable ribbing he received from fellow officers for being “the old guy, ” Johnson started making good arrests, found his “cop legs” and won respect. After six years on patrol, Johnson reluctantly accepted a promotion to burglary detective. “I really loved patrol, because that’s where the action was.” Once he sat in the detective’s chair, however, he surprisingly liked what he found. “It’s got its own kind of romance about it. In a subtler way, it’s just as exciting because you get to build something from start to finish, and you know what the ending is.”

Life as a detective, however, didn’t necessarily keep Johnson away from the action. The climax of his book (and the most publicized incident of his career) is Johnson’s pursuit of an escaped cop-killer on February 3, 2012, while he was a detective with the MPD. Johnson found the suspect, who had just fatally stabbed a Mobile police officer, hiding beneath a house, and a shootout commenced. Johnson was injured when a ricocheted bullet tore through his left arm, but luckily it was only a flesh wound.

At 60 years old, Johnson wondered if  it was time to retire. “But I didn’t want to quit right after I got shot. If the cowboy gets thrown from his horse, he’ll never ride again unless he gets right back on that horse, ” Johnson explains, slapping the table for emphasis. He worked as a detective for two more years before deciding to ride off into the sunset.

Six months before retiring, Johnson began writing anecdotes of his experiences as a cop. Friends encouraged him to pen more, and a year after his retirement, he finally had something he thought was presentable for publication. It was a long process, start to finish, but one that eased him into civilian life.

“I had a withdrawal period [after retirement], because I really loved the job.” Without the badge, Johnson found himself to be nothing more than a husband, father and grandfather. “And that turned out to be just fine, ” he says contently.

He might not be chasing bad guys anymore, but with his book release and plans to continue writing, Johnson stays busy. “It feels like I’ve lived about eight of my nine lives, ” he writes in his book. But judging by the smile on his face when he picks up his granddaughter, he plans to make the most out of that last life.

Eager to read more about Mark Johnson’s time on the force? Pick up a copy of his book,  “Apprehensions and Convictions.”