By definition, if you pull on boots and a slicker on a rainy morning in England, go out the door to a river running through the middle of the city, and get aboard a ferryboat and take the helm — your passengers would call you a waterman. If you board a dory before dawn, plying the seaside waters in New England for oysters and crabs and lobsters, you are a waterman. If you are an elite surfer, say, or a cliff diver, or a swimmer — you are a waterman.

If you are Tom Yeager, and none of the above — you are a waterman.

A Mobile Bay waterman. You know the water. And the water knows you. You are in this world together.

So if Hurricane Katrina tries to rip the Gulf Coast to shreds, and the storm waters flood Fly Creek in Fairhope, and if you have a sailboat in trouble, you dive into the muddy, boiling mess and swim toward your house where the skiff you need is pushed up against the floor boards of your home 20 feet above your dock there. When you try to keep your head above the twisting brown water, you wonder, Was this such a good idea? And then a tire and wheel go bouncing past in the fast current. The water knew you needed a hand. And you grab on. It was aired up good, and you make it to where the crush of creek water is vibrating the pilings of your home. And you are able to wrestle your Stauter-Built skiff loose from beneath the floor joists. The outboard starts right up and you save your Hinckley from peril. And you rack up another waterman story.

Captain Tom Yeager is a real captain and a Port of Mobile harbor pilot who has a shipload of water stories. Tom was four times the commodore of the Fairhope Yacht Club. The voting members know a real waterman is hard to find. 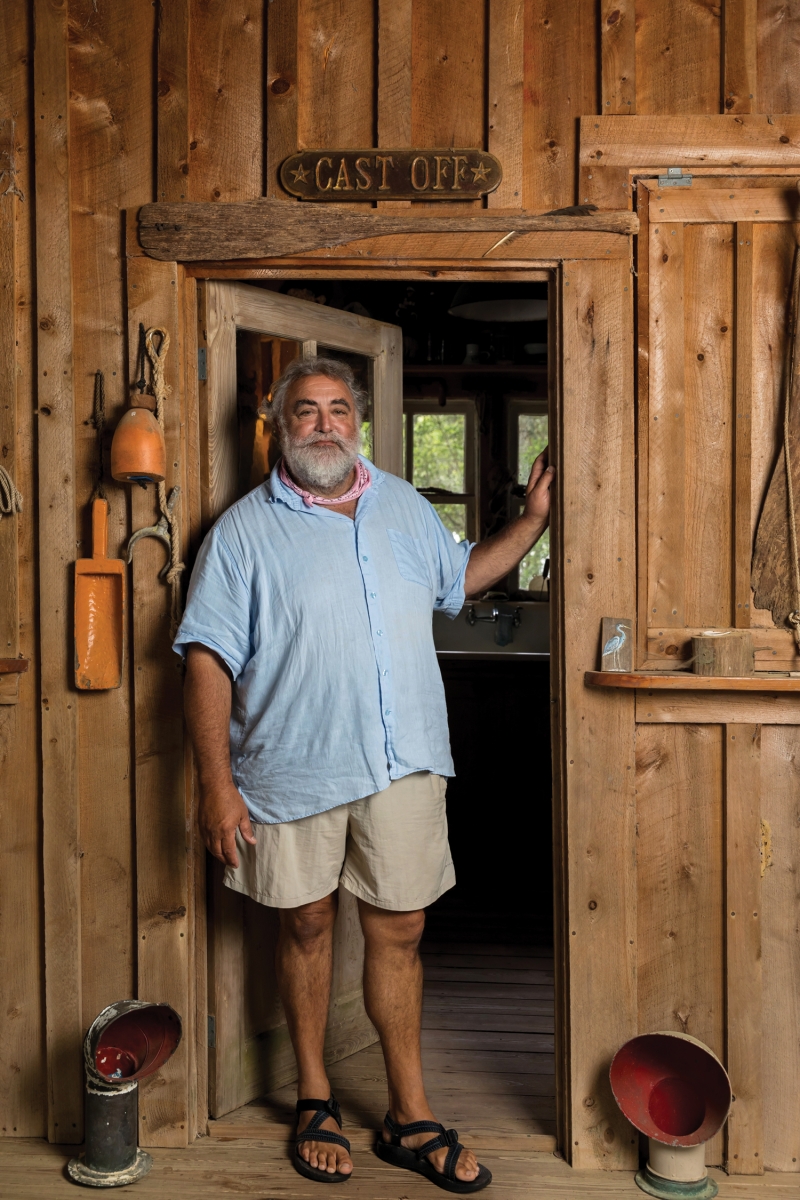 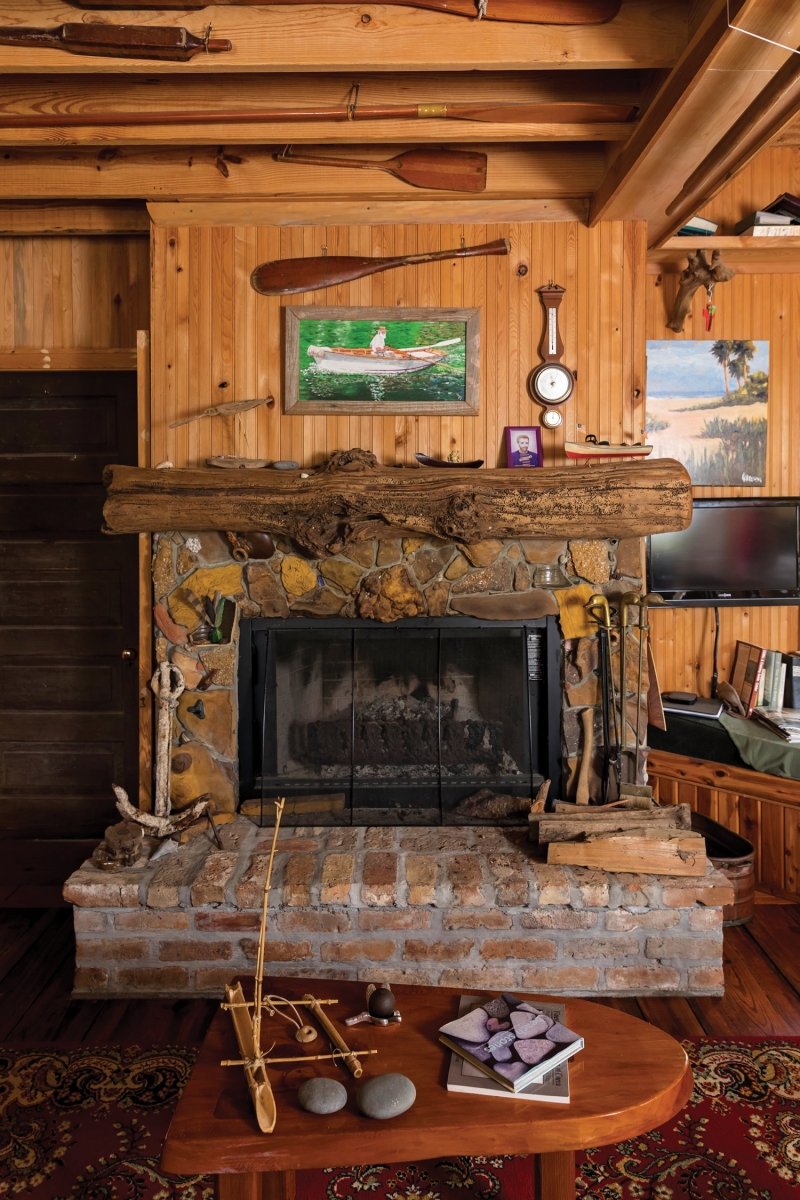 “When I was a boy, I slept on the screened porch of my family home, ” Tom says. He’d rather not take an electric fan and a bed inside four walls. Up at dawn, back then, and down on the beach and into the Bay. “I lived in the Bay, ” he adds. “We had family cookouts on the beach: we ate fish, crabs, shrimp out of the Bay waters.” Tom’s father survived World War II, and he and other fathers who made it back were mighty glad to be home in Fairhope on the Bay. They drew family close and lived like everything was a gift. Sons and daughters were raised to take nothing for granted. “Every weekend was a celebration, sunup to sundown, ” Tom says.

As a boy, he learned to handle giant logs adrift along Fairhope Beach, how to nudge and coax and turn them. That sort of cooperating with the thing floating instead of bossing it around got into his bones and blood.

Out of high school at the Marietta Johnson School of Organic Education, he pointed his bow not at college, but across the Bay to the waterfront in Mobile. He hired on with Captain Joe Ollinger and Captain Wick Nelson. A deckhand. Bottom of the ladder. Muscling up thick lines and cables and dumping them onto bits. Bending his back in the sun and the rain, heat and cold. Loving every minute.

Off the barge decks, Tom took every chance at a visit into the wheelhouse. And soon enough, Cap’n Ollinger or Cap’n Nelson, with their good eye and strong intuition, asked young Tom did he want a turn at the helm. Boyhood memories of cypress logs floating at his knees were still stranded into the muscles and sinews of his hands and arms and, standing wide-legged with eyes down 200 feet of steel, or 400 feet, Tom Yeager found he could guide a three-thousand-ton tow, could hold its course, could land it alongside a dock, and the line handlers only needed to drop a line over a bollard.

After only two years’ work on the river, Tom Yeager was named the captain in the wheelhouse.

“Over and over, ” Tom says, “at Marietta Johnson we were taught to look around and use what’s at hand.” He’s been known to load a boat onto a trailer at dockside instead of heading down the creek to the launch ramp at the yacht club. Or haul home a bois d’arc log from the Bay for crafting into a mantle for his fireplace. His half a dozen and more sailboats and skiffs are handmade using local woods.

You will get a frown from Captain Tom for talking about his town, his Fairhope, like it’s a set of urban considerations, and angry city council meetings. “Have you looked up the word Bohemian?” he asks. “Unconventional souls gathered in the interest of art and unconventional ideas, or something like that.” Tom thanks the founding fathers for their unconventional hopes for a utopia.

“They wanted to keep a lifestyle for the people, one that remembers nature, ” Tom says. When the mayor and council bought 114 acres of land at the north entrance to Fairhope, not to develop, but to preserve as a wooded park, it gave Tom hope. “The spirit of the original settlers, the founders, is still here, right now, alive in good ideas like that, ” Tom says.

Carl Black is another waterman. He, too, came up on the docks in Fairhope, raised beside bearded shrimpers like Red John, aboard boats like the Dismas. Carl calls me from the northwest corner of the South Pacific, while he’s sailing alone aboard his sailboat CV around the world. “Eight hundred words to tell about Thomas? Nuts!”

We agree there’s 800 words on the planks under his feet in his Fly Creek cottage. How the man putting down the pilings for Tom’s house came up with a sinker, a log that sank instead of floating with the timber raft to some waiting mill. Then another giant longleaf pine was dredged up from the bottom. Tom set up his own creek-side sawmill and sliced the logs into the boards that floor his cottage.

“Alright, say this, ” Carl growls, “say that I am a man who never calls for help with boats.” He owns Ross Maritime, a ship chandlery, line handling, and transportation operation at the Port of Mobile. “Say there was a certain rescue tow that I was making on a Joe Cain Sunday years back, when a flat calm Bay got tuned-up by a 30-knot Norther, and whitecaps and breaking waves put six inches of water around my ankles. And in that cold dark, struggling, I ran out of fuel. Something bad, got worse quick, ” Carl says.

“I made one phone call, and you know damn well who I called. Say that.”

Sonny Brewer is the author of the novel, The Poet of Tolstoy Park. He is finishing a memoir called A Boat to See Me Home. He is grateful to the editors for upping his word count to 1,100.