Down here they call him “Dr. Oyster.” “Here” is the Auburn University Shellfish Lab on Dauphin Island, where Associate Professor Extension Specialist Bill Walton, Ph.D., is the master of the mollusk.

“I wish I could offer you cocktail sauce, ” the Auburn teacher says with a smile, leading a tour of the Dauphin Island lab, where oysters in all stages of life are everywhere. Plastic tubing runs from tanks, some the size of goldfish bowls and others the size of minivans.

In the lab are “seed oysters”— babies from the size of pinheads to your pinky nail — lodged in buckets. They are sorted and inspected. From a distance they look like gray gravel. Up close, they are tiny shellfish, 50, 000 to 150, 000 per bucket.

Small tanks house oyster eggs, specks practically invisible to the naked eye. They are nurtured and fed and encouraged to spawn in what Dr. Walton calls “an oyster’s Club Med.” The mood enhancement works. On some days, Dauphin Island’s facility hosts over a billion such microscopic eggs.

“Bill is the brains and leadership that launched Alabama’s modern oyster industry, ” says Ft. Morgan’s Navy Cove Oysters’ Chuck Wilson, speaking on behalf of his friend and mentor. “It’s wonderful having a specialist conduct research to help us solve our challenges. Bill is the first one in the water and the last one out. He is not afraid to get his hands dirty.” 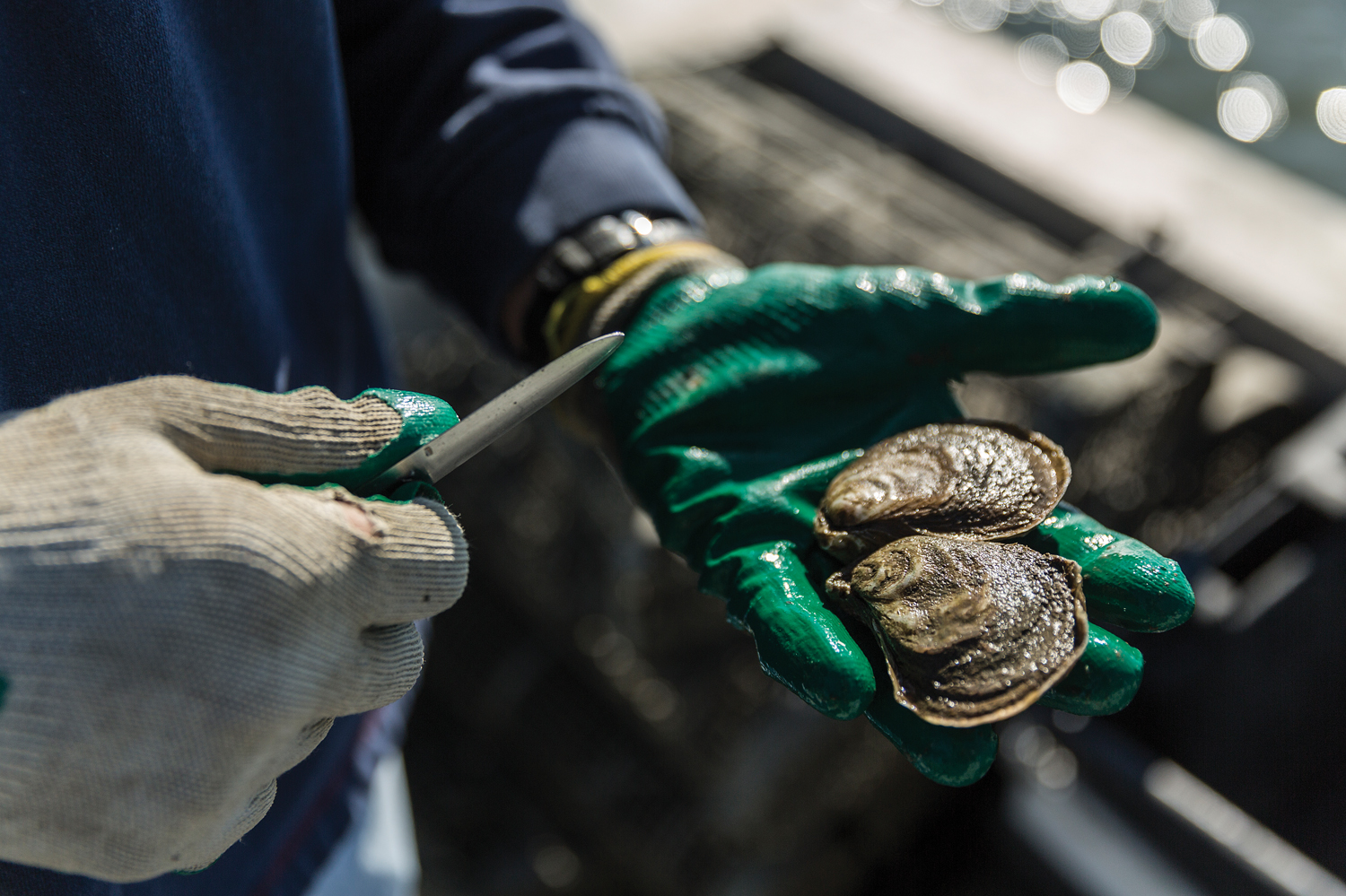 Grand Bay’s Point aux Pins oyster farm’s Hugh McClure adds, “Bill doesn’t just stand on the pier and watch.” On today’s visit at the Auburn Oyster Lab, McLure shovels 50, 000 small oysters through a tumbler apparatus that looks like a sideways washing machine. Shellfish are added in one end. They spin in the machine, bounce and fall through holes, sorted by size. The tumbling action creates deep pockets in the meat and the attractive shells that connoisseurs prize. McLure and Dr. Walton monitor the operation.

“Buyers want nice shells and, of course, good meat, ” says the doctor. “If the oyster is not pretty, it will not bring a good price.” The advice is well heeded.

“I don’t know anybody who knows more about oysters than Bill, ” adds Jon Gil of Southern Cross Sea Farms in Cedar Key, Florida. “He has been here when I needed him as a trainer or just needed his advice.”

Dr. Walton has a bachelor’s degree in biology from Tufts University, a master’s degree in ecology and evolution from Rutgers University and a Ph.D. in fisheries science from the University of Maryland. But his initial training started as a boy, playing at a creek.

“I grew up on a dirt road in rural New Jersey, ” he notes. “It was not an environment conducive to raising oysters.” But his childhood home had nearby creeks with crawfish. “Creek critters helped start my interest in aquatic invertebrates.” His fascination never left.

“Invertebrates are so different, almost like alien life forms, ” the oyster expert says. “They are in a whole other world. In the book of life, invertebrates are a small chapter in the back of the book, yet they are the majority of the animal kingdom.” 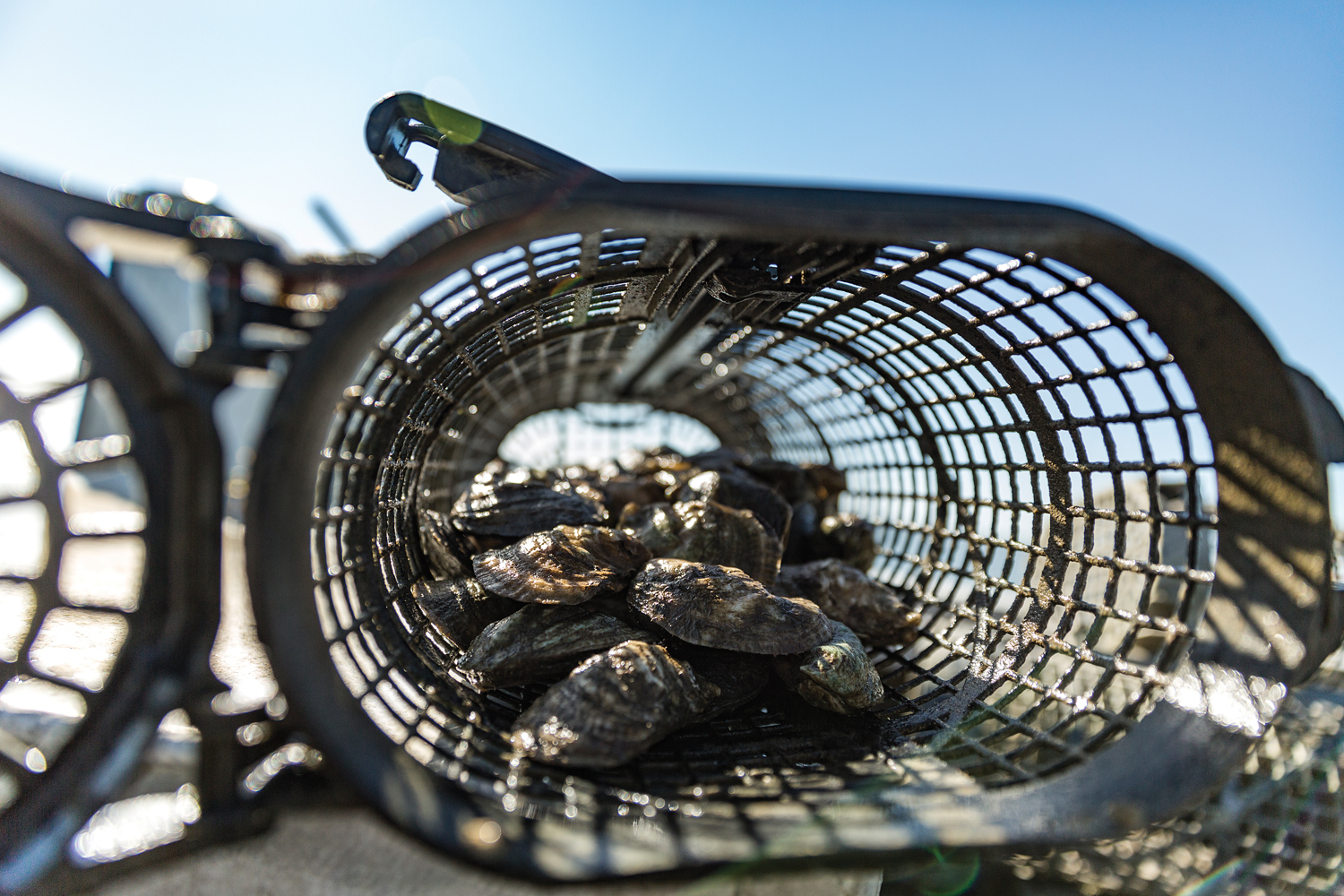 ABOVE Baskets of oysters are air-dried to keep the mesh and oysters clean of overgrowth like barnacles, seaweed and mussels.

His pre-Auburn-on-the-Island days included work as a marine extension agent with Cape Cod Cooperative Extension and Woods Hole Sea Grant. He and wife Beth — a Massachusetts native who worked in the fish hatchery business — once owned a small New England oyster farm.  At an early point in his career, he was a clam constable.

But one day an email came through on Dr. Walton’s computer in Cape Cod: A ‘help wanted’ bulletin from Auburn University.

“The university was looking for a shellfish specialist to work on an Alabama island I did not know, ” recalls Bill. “Our knowledge of Dauphin Island consisted of what Beth saw on the news about Hurricane Katrina.” In the summer of 2008, the New England couple traveled south for the job interview. It was their first time in Alabama.

“It was so green and beautiful, ” Dr. Walton recalls about his first impressions of the Gulf Coast. “I loved Mobile’s history, the bayou’s character, and Mardi Gras. I still do.”

During the Christmas holidays of 2008, the couple — with their two children, boys ages 3 and 1 — drove from Cape Cod in a terrible blizzard, for a new life in the sunny South. They arrived at Dauphin Island on December 31, 2008. “On our first visit in summer we saw palm trees. We thought South Alabama would be tropical, like Key West.

“We were freezing! Beth searched the luggage for winter clothes for the boys. This was not expected!” After almost a decade down here, the family has adjusted to the area’s quirks of nature, including the weather. 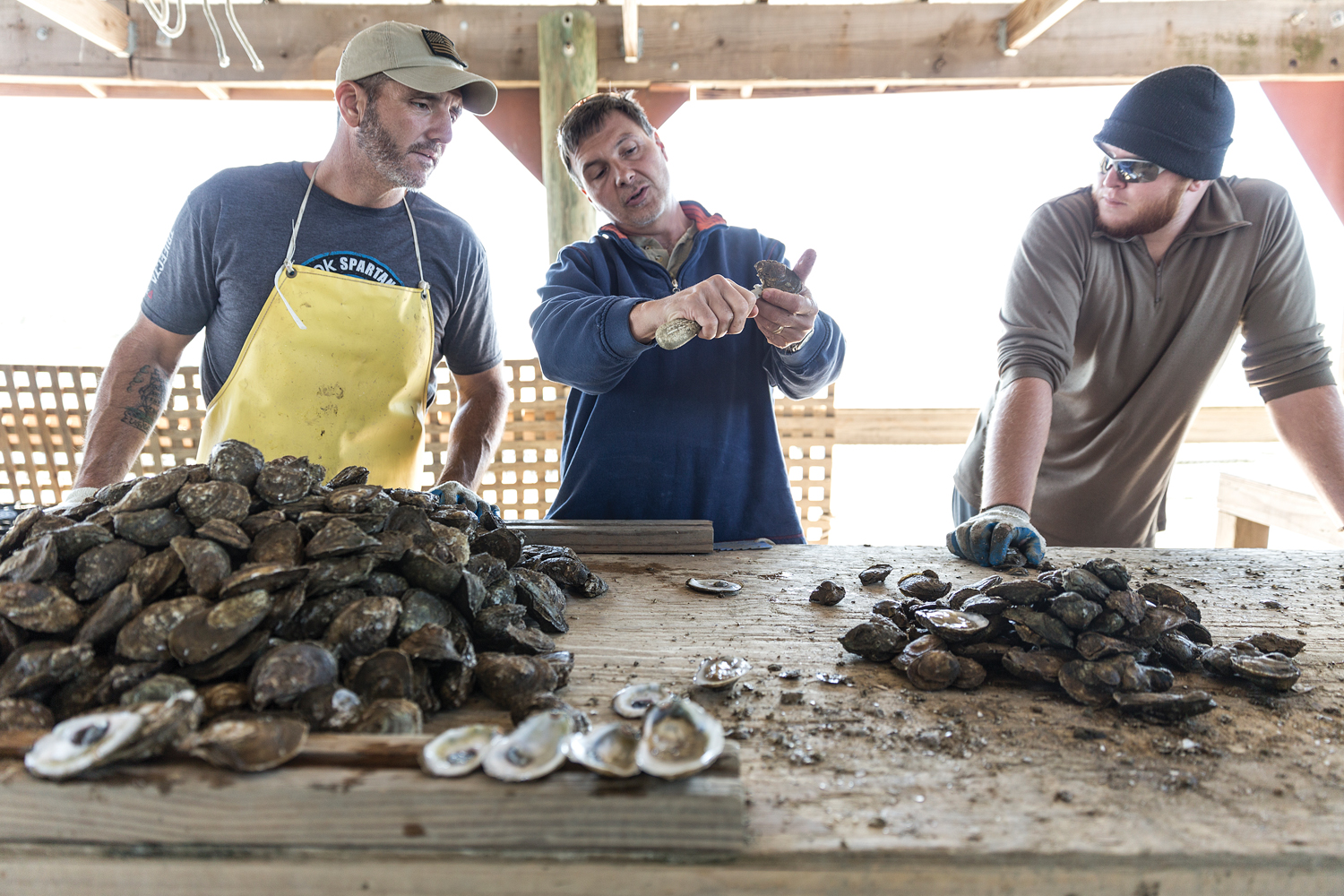 ABOVE Walton inspects the condition of oysters at the Point aux Pins oyster farm with Hugh and Brandon McClure.

Today, Dr. Bill is a major force in the Gulf Coast oyster industry. “I think it’s because he is very down-to-earth and his energy is unbounded, ” says colleague Dr. Stan Allen, Virginia Institute of Marine Science.

One of Walton’s ongoing projects is off-bottom oyster farming, a process involving the placement of baby oysters in cages or baskets suspended off the ocean floor, protecting them from predators, such as barnacles. “It’s a TLC approach, ” says Dr. Walton, “as opposed to the tough love traditional method of oysters planted on the ocean bottom.”

He worked on the off-bottom technique with a pioneer, LSU oyster expert Dr. John Supan. “It’s nice having Bill nearby, ” Dr. Supan notes, from his Baton Rouge campus. He then adds, “Bill and I were featured together in a stadium football bulletin when LSU played Auburn last year. It proves two football rivals can work together.”

Communities and fisheries can work together, too, and Dr. Oyster is passionate about both. Another colleague, Senior Marine Scientist at Dauphin Island Sea Lab, Dr. Kelly Dorgan, says “Bill talks to everyone — business owners and environmentalists, farmers and fishermen, students and civic groups.” And, of course, the media.

Walton’s outreach — coupled with his field experiments in off-bottom farming, tumbling and air-drying — has produced one of the country’s largest marketers of premium, consistent-quality oysters that are beautiful to behold, easier to shuck and as perfectly salty as Gulf Coast waters ever produced.

“I love oysters and helping create opportunities for people on the coast to live and work with the water, ” Dr. Walton summarizes. “To me it says something: We live in a place where we can harvest oysters from our own waters. We live in a beautiful place.”

He adds, “In order to live, oysters must have pure, clean water. No one understands this more than oyster farmers; their livelihood depends on clean water. You want these people in your neighborhood.” 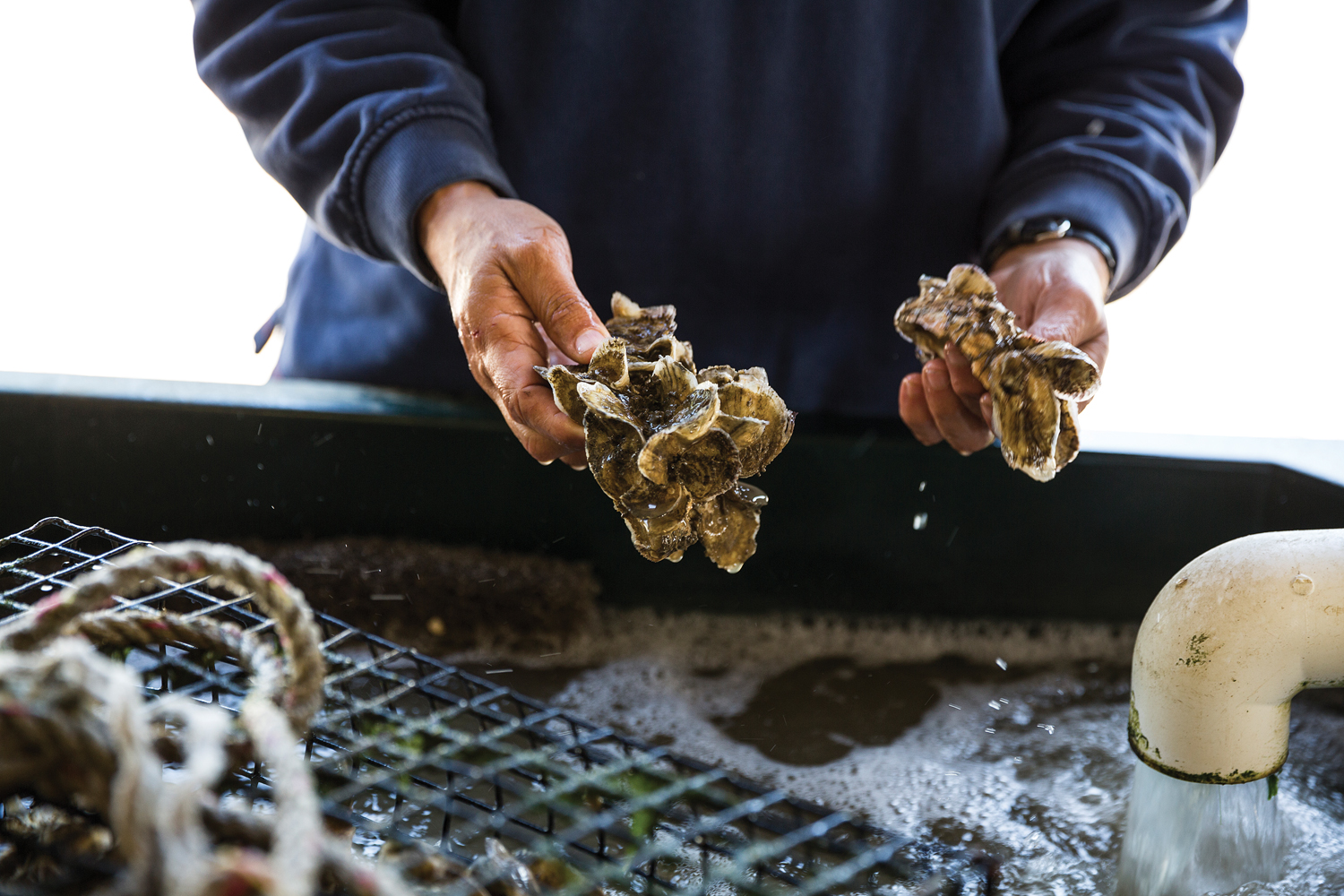 ABOVE Spat on shell, or clusters of young oysters on older shell, are used for enhancing public reefs, restoration efforts and private leases.

While Alabama Oysters can now be found on menus at swanky restaurants far and wide, they still pop up locally, too. Be sure to ask for these farmed oysters by name at establishments like The Noble South, Dauphin’s and Fisher’s at Orange Beach Marina.

Many of these locally farmed oysters can be pre-ordered by the case from Bon Secour Fisheries. 949-7411

While some may view it as sacrilege to top these buttery fresh bivalves with anything at all,  others prefer a little zing. Skip the over-used cocktail sauce and try one of these creative condiments!

Coden Beach Oyster Co. // Sriracha and a squeeze of lemon