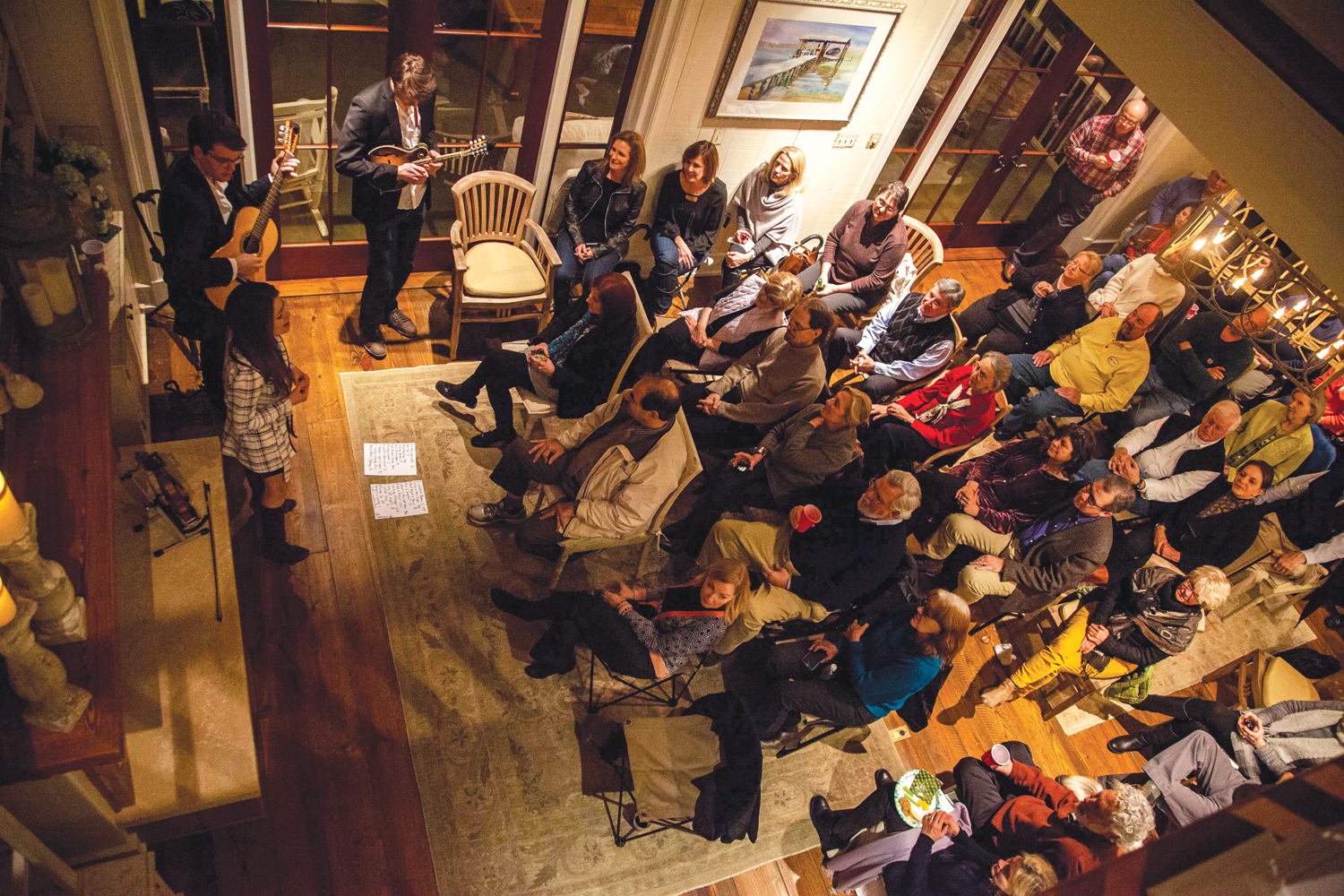 ABOVE A cozy living room might just be the perfect place to see your favorite band. This show at Judy and Walter’s home featured, from left to right, bluegrass artists Kate Lee O’Connor, Jim Shirey and Forrest O’Connor.

A few years back, while visiting family in Birmingham and exploring a quaint neighborhood, Fairhopian Skip Jones stumbled upon what looked like a party. Skip then noticed lights strung across the backyard, a sandwich bar on the front porch and a small stage arranged for a musical performer.

“I realized it was a house concert, ” Skip says. Though hesitant at first, he decided to join the party. “If it was my house concert, I’d love for somebody to just come in, ” Skip explains.

“Well, I went in and was kind of the star because I had come all the way from Fairhope, Alabama!”

Skip was no stranger to this new form of get-together. In fact, the Bay area builder had hosted a few back in Fairhope. And although the events are typically invitation-only, Skip’s story illustrates the whimsical fun and laid-back atmosphere of an in-home concert, where music lovers experience a show in a casual and personal setting with old and — perhaps by the end of the night — new friends.

The Bay area is fertile territory for such a trend with its temperate weather (good for outdoor performances), tight-knit communities and plentiful music lovers. And as with any growing craze, a pioneer group leads the way.

In his previous home on Mobile Bay, Skip hosted a handful of concerts featuring artists such as New Orleans singer-songwriter Andrew Duhon and blues extraordinaire Lisa Mills (who, at press time, is touring Europe). Skip admits his new home is less suited for house concerts, so his most recent private concert experiences have all been as an invited — or, sometimes, uninvited — guest.

About four times a year, Skip receives an email requesting his attendance at the home of MB Editorial Consultant Judy Culbreth and husband Walter Kirkland. Walter, a passionate Irish fiddler, is known for organizing a balanced mix of contemporary singer-songwriters and traditional Celtic artists to perform for friends at the foot of his Weeks Bay pier. He’s forged relationships with high-caliber musicians over the years at songwriters’ festivals and Celtic music camps, and he draws from those resources to bring top-notch talent to a medium-sized, friendly audience.

The logistics of a house concert are pretty straightforward. In an email to those on his ever-expanding contact list, Walter writes, “As usual, this is a concert performed by friends, for friends. Weather permitting, we will have the concert outdoors facing Weeks Bay. Please bring a pot-luck dish, something to drink if you wish, a lawn chair and $15 per person, every dollar of which goes to the artist.”

Walter and Judy like to begin the evening with a social hour, during which old acquaintances greet one another beneath the property’s live oaks and meet the newest additions to the party/show. Finger foods and desserts are shared and praised, and anticipation builds for the upcoming performance. As the first hour comes to a close, the eager guests (usually a crowd of around 80) begin settling into their lawn chairs for the focal point of the evening: the music.

“When the music starts, it’s a concert, ” Walter says. “The audience stops talking and mingling. The artists are not playing background music.”

That being said, Walter’s concerts are far from rigid and stuffy, thanks in large part to the musicians.

“They are all very actively engaged with the audience, ” Walter explains. One such artist is Steve Poltz, an “old-fashioned troubadour” who travels from Nashville to the Kirkland Weeks Bay home. “He tells these great stories between songs. And the last time he was here, he sang a song about Judy and me — he just made it up!

“Everybody loves this guy. He’s played at our house twice, and everyone is excited for him to come back, ” Walter says. 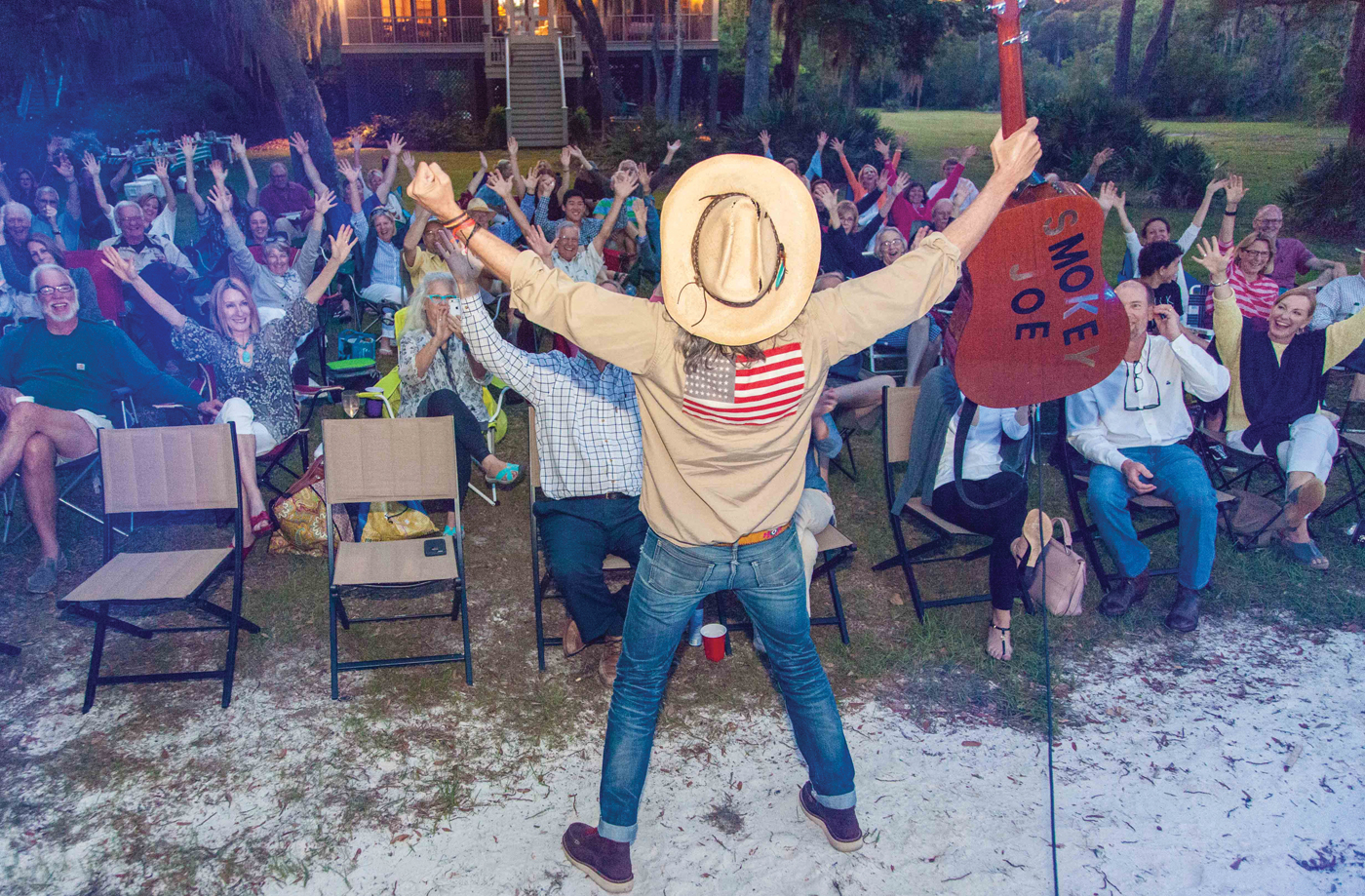 Other musicians starring under the moonlight on the Bay include Forrest O’Connor and Kate Lee O’Connor of the Grammy Award-winning O’Connor Band, Logan Brill (rising country and Americana star), Jack Pearson (blues and rock), brothers Cillian and Niall Vallely (world-famous uilleann pipes player and concertina, respectively), and Tom Morley, the area’s very own fiddle and violin legend. This month, Walter has scheduled Kevin Crawford and Colin Farrell of Lunasa, “the hottest Irish trad band on the planet right now, ” he boasts.

The true beauty of a house concert is that it’s a beneficial experience for the audience and the artist.

“I enjoy it because you’re really up close, ” Skip says. “Usually, you get to talk to the artists, so as an attendee, it’s fun. And people are quiet and listen. It’s not like in a bar where everybody’s talking over one other.

“And if a house concert draws a reasonable attendance, ” Skip continues, “it might provide double the amount of money someone would get from a gig at a bar.” In addition, the musicians appreciate an attentive and respectful audience. It’s a comfortable place to try out new material and an opportunity to expand the fanbase.”

Skip adds, “I think both Walter and I would say that it’s gratifying to be able to showcase somebody that you think is good and to share that person’s talent with your friends.” 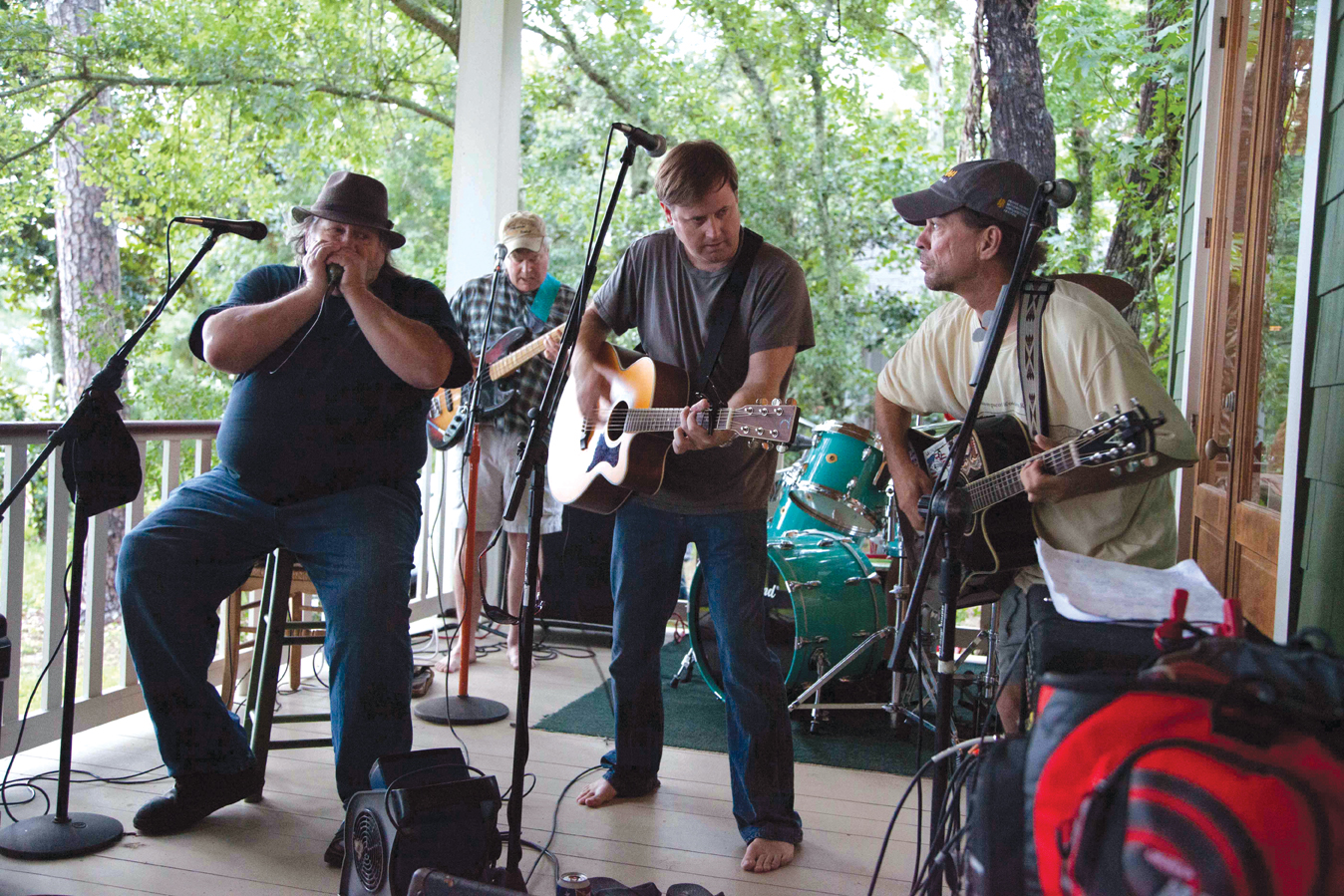 ABOVE The Leavin’ Brothers perform at the home of Skip Jones.