Crispy on the outside and juicy on the inside, the perfect fried chicken might be hard to find — but it sure is fun to search for the best. Take a food lover’s journey to discover 10 local restaurants that are taking the phrase “tastes like chicken” to a whole new level.

The fried chicken served by Pete Potter and wife Jo at Neighbor’s Seafood & Chicken is an old family recipe that’s been tweaked over the years to crispy perfection. The trick? “We find that it’s really important to remove excess breading from the chicken before frying. A lot of people get too heavy with the batter, ” Pete says. If the lunchtime rush is any indication, it looks like he knows what he’s talking about. Should life ever take you outside the South, Neighbor’s is the kind of place you’ll have dreams about. Fried chicken: 7 days a week

Although she only opened the doors of her first restaurant in 2011, owner Mary Smith has been cooking up a storm since the age of 7. “I grew up in a family of 12, and my mother was always working, so I came up with my own fried chicken recipe.” Because of her dislike of greasy food, Mary has always fried her poultry on medium heat, which she says makes for a less messy bite. Often, a line of customers extends beyond the front doors because her chicken is always served fresh. “We always sell out!” she says. Fried chicken: 7 days a week

Mobile’s locally owned and operated fried chicken chain has enjoyed greasy success in the Port City since 1964. Operating from five different locations across town, Hart’s Fried Chicken offers a local fast-food alternative to the well-known national restaurant chains. While you’re at it, try a side dish of their perfect peach cobbler. Fried chicken: 7 days a week 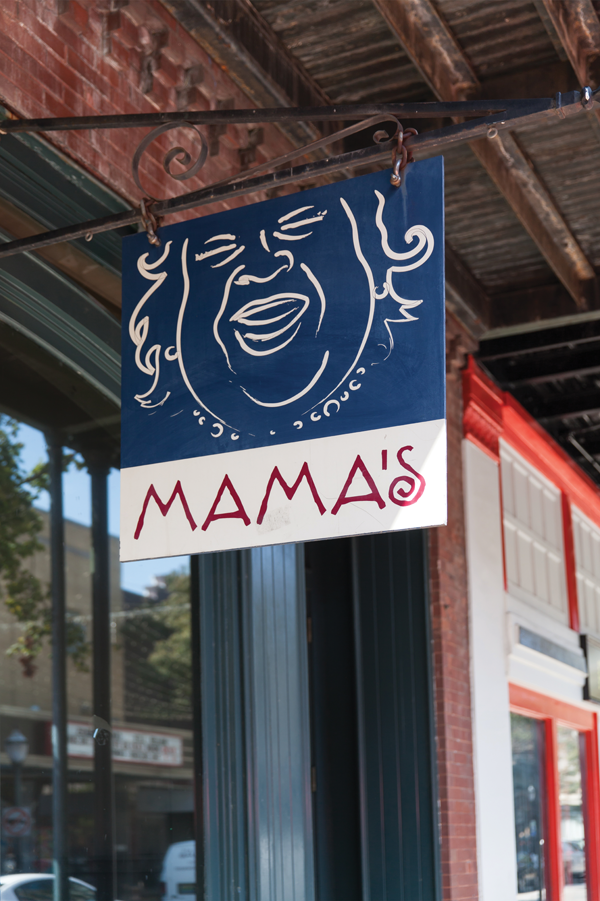 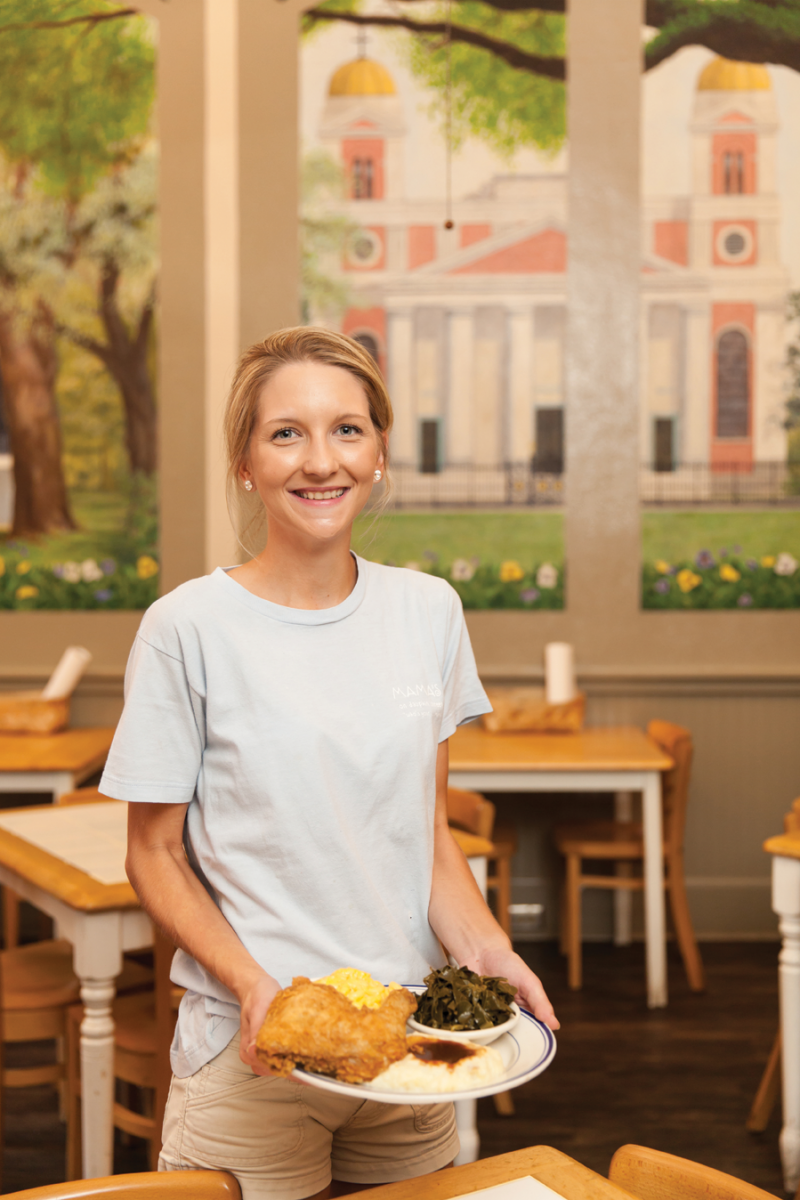 ABOVE LEFT For the past 13 years, Mama’s on Dauphin has been downtown Mobile’s fried chicken mecca. Owners Katy and Marshall Barstow opened the restaurant’s doors eight months before their wedding, and “no one thought it would work, ” Marshall says. Oh, how wrong those people were. The restaurant’s busiest days are Mondays and Wednesdays, predictably, the days that fried chicken is on the menu.

ABOVE RIGHT Brittney Curtis, a waitress at Mama’s on Dauphin, serves up the day’s fried chicken special. “Our chicken recipe is something we’ve tweaked over the years, ” restaurant owner Marshall Barstow says. “We prepared it very differently when we first opened, but we developed it and now it’s become a staple.”

“It’s a mainstay, ” owner Marshall Barstow says of his downtown diner’s fried chicken. The preparation method is something Marshall and wife Katy have tinkered with over the past 13 years of business, and it looks like they’ve found a winner. “We’re always busiest on chicken days, ” Marshall says.

The Barstows like to let their fresh chicken sit overnight in a brine containing garlic, bay leaves and seasoning salt before tossing it in a spectacular seasoned flour mix. Try it for yourself at their dining room where an enormous mural depicts quintessential Mobile scenes. Any self-proclaimed fried chicken lover looking to make a pilgrimage across the Port City in search of impeccable poultry will find that Mama’s on Dauphin, in the heart of LoDa, is the obvious place to start. Fried chicken: Monday and Wednesday

One month after opening the Stagecoach Cafe in 1995, owner Joyce Overstreet learned a valuable lesson. “The chicken truck was running late, and I just thought, ‘Oh well, we just won’t serve fried chicken today.’ When customers arrived, they just about ran me out of town! It was mutiny on the bounty!”

Since that day, Overstreet has kept the buffet line perpetually stocked with fried chicken, to the delight of her customers. The recipe, passed down from her grandmother, requires dunking the chicken in a buttermilk and egg wash. “But the real secret is to use a good, self-rising flour and high-quality seasonings, ” Overstreet says. “You shouldn’t try to cut any corners.” Fried chicken: 7 days a week for lunch

When Michelle Young purchased the historic Daphne home that now houses the popular Sugar Kettle Cafe, she successfully preserved a piece of local history that was in danger of being torn down and forgotten. Today, the establishment and its food hearken back to days of old — particularly the fried chicken. “We’re frying chicken the way your mama and grandma cooked it, ” says manager Mitzi Andrews. “We just use salt, pepper and flour and drop it in the oil fresh.”

Sounds pretty straightforward, but what separates good fried chicken from great fried chicken? “We use a really high-quality oil, ” Andrews says. “That’s the real key.” Also, be sure to check out the second location in Bay Minette, opened by owners Michelle Young and Cheryl Reed two years ago. Fried chicken: Sunday, Monday, Wednesday and Thursday

“The mixture of spices that we use in our flour is a secret, ” co-owner Daneen Buck says. But she’s not a completely closed book on the subject: “We get started on our chicken early in the morning and let it sit in a liquid batter in the cooler for hours, ” she says. “We take our fried chicken pretty serious around here.”

The popular eatery is a family affair; Daneen shares the diner with her brother Ken, and their fried chicken formula originated with their mother. Open for breakfast, lunch and dinner, the place also features a full bar, with plenty of drink options to pair with that crispy drumstick. Fried chicken: special on Tuesday for lunch and dinner

Using a family recipe from the 1950s, Danny’s Fried Chicken is years ahead when it comes to frying yard bird. According to general manager Tammy Conway, the fresh chicken is marinated for 24 hours before it meets oil. Besides that detail, her lips are sealed. What we do know is that, after 39 years of business, they must be doing something right. Fried chicken: 7 days a week 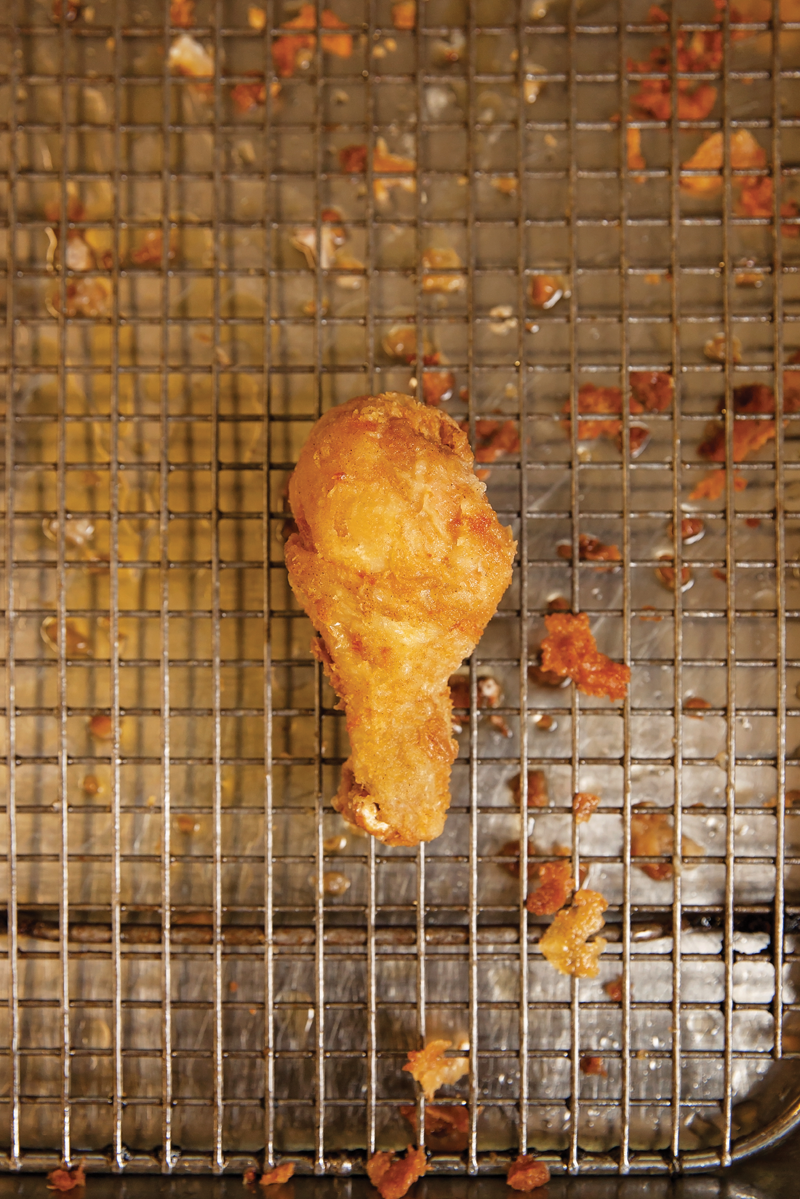 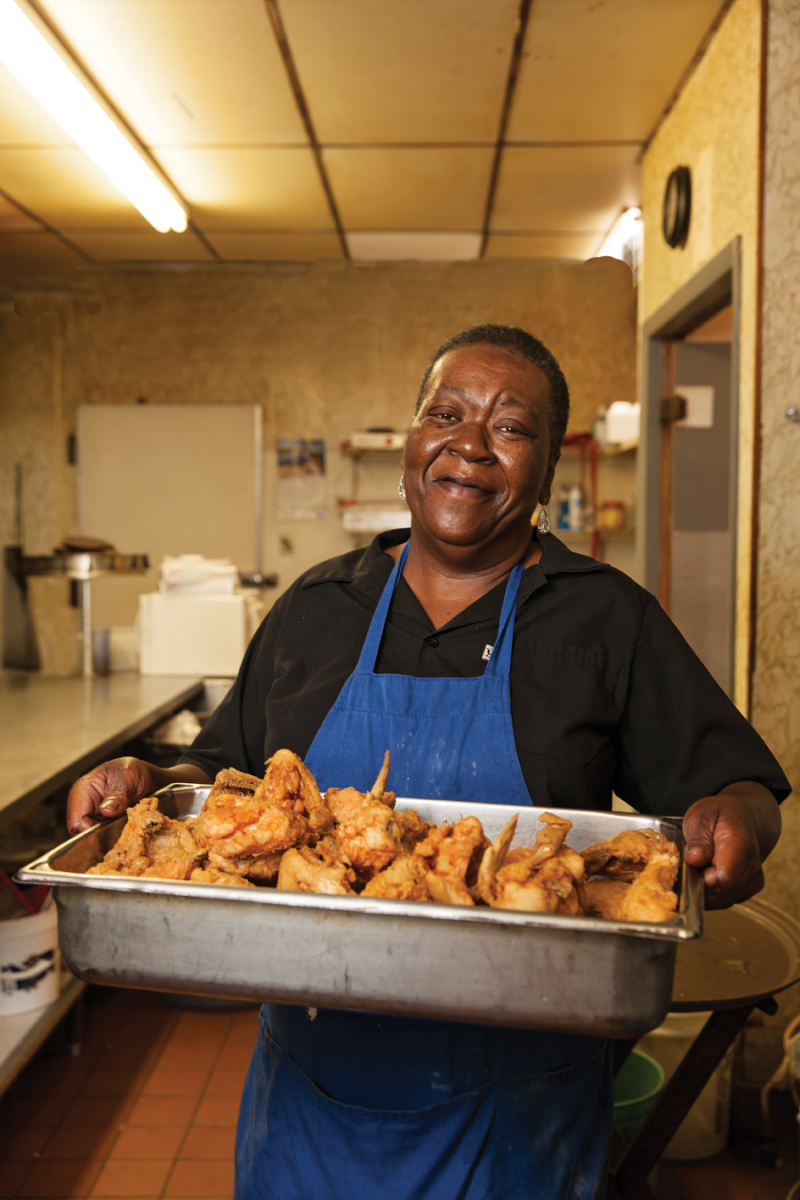 ABOVE Dorothy Mims, head chef at Mama Lou’s Family Restaurant in Robertsdale, can’t help but smile when she’s cooking up a storm in the kitchen. “I started out cooking when I was 12 years old, ” Dorothy says. “But I’ve been working here at the restaurant for 20 years.” Her favorite thing to hear from a customer? “We love coming here, and your fried chicken is amazing!”

After 20 years of working in restaurant kitchens, Dorothy Mims, the head chef at Mama Lou’s Family Restaurant, knows what makes her customers keep coming back for more. “When people come in here, they talk about how good the sides are, ” Mims says. “But most of the time, they’re talking about our chicken.” A stone’s throw from Highway 59 in Robertsdale, Mama Lou’s opened in 1988. Current owner Dan Crotts, an Ohio native, took over in 2005. “First of all, you’ve got to use fresh chicken, ” Crotts says off the bat. The popular buffet offers no-frills fowl, seasoned with salt and fried without the aid of pressure cookers.

“We like to fry it for about 15 to 20 minutes, ” Mims says about keeping it juicy on the inside but crispy on the outside. “You won’t see us cooking chicken for 30 minutes!” Fried chicken: 7 days a week

Mike Williams, owner of Roadkill Cafe in Elberta, says the best way to fry chicken is to keep the batter light. “We just toss our chicken in flour with a few secret seasonings, ” Williams says. The eatery has been serving up this classic fried chicken since its opening in 2000. Fried chicken: every day for lunch except Saturday (closed) 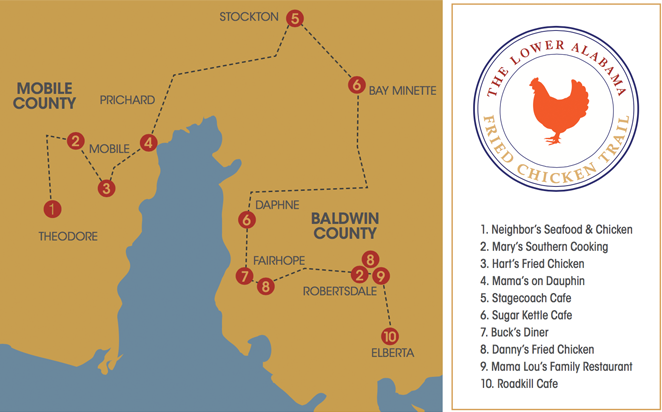